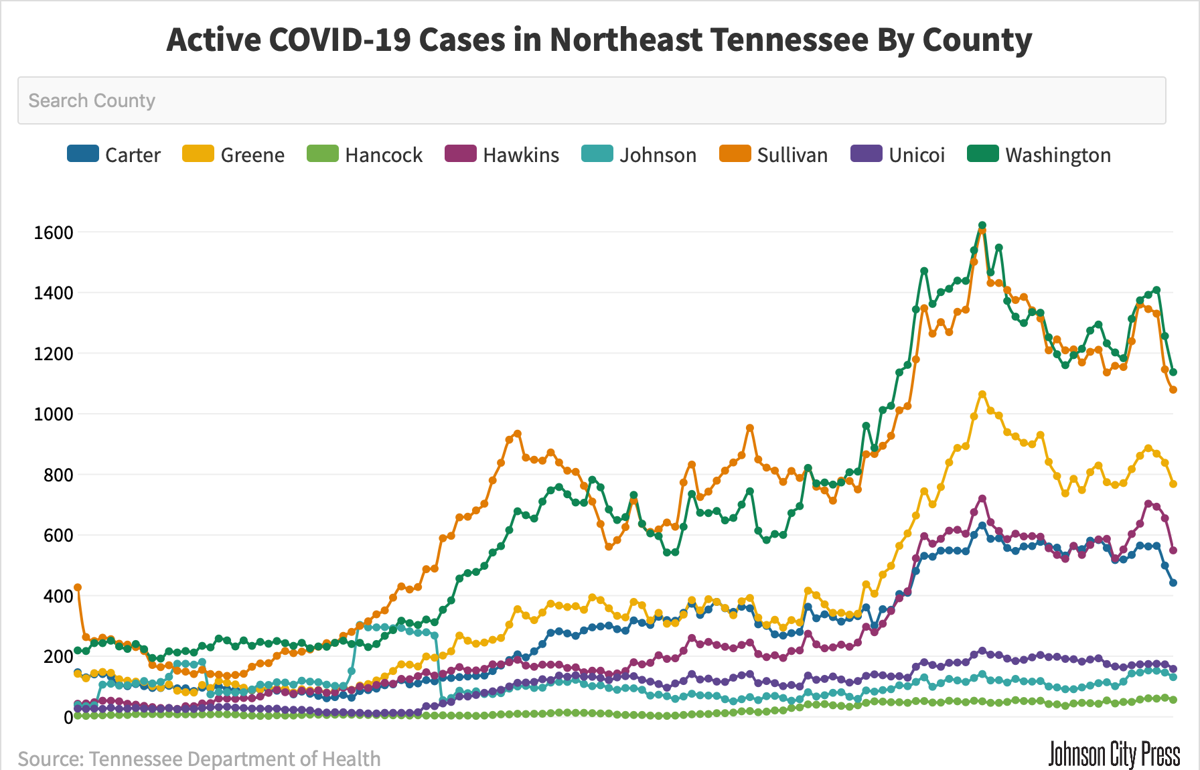 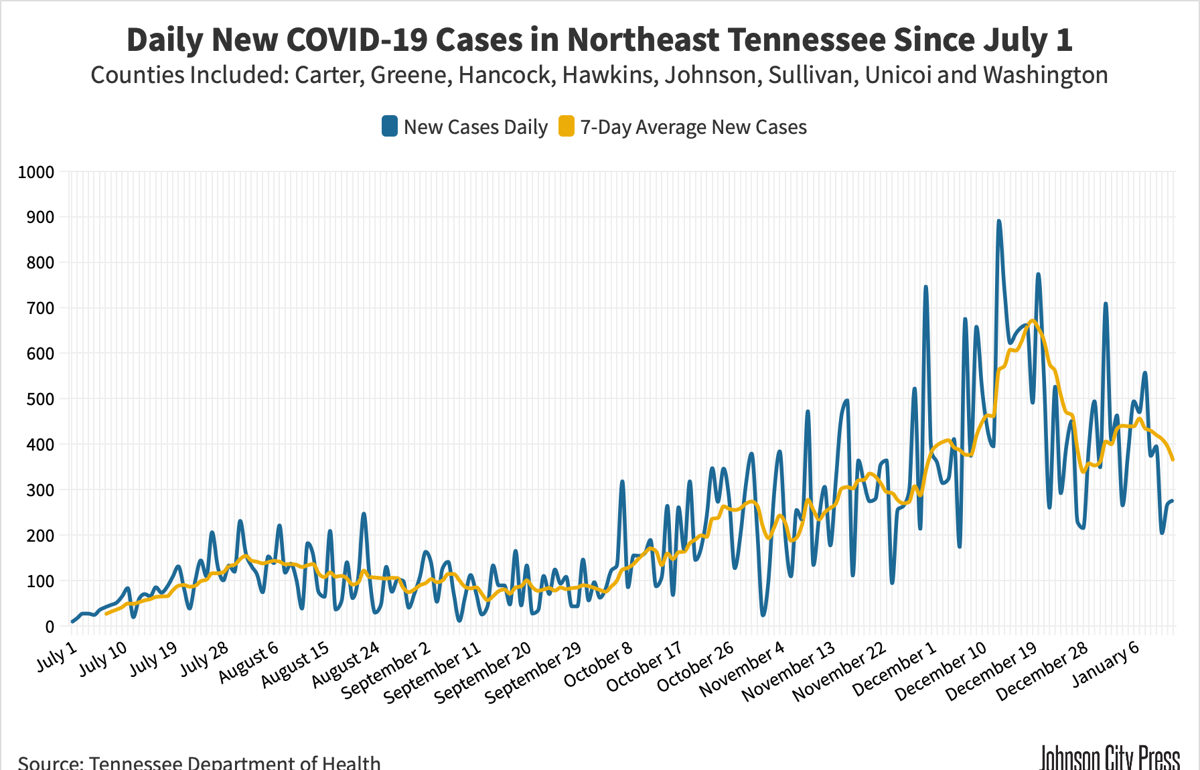 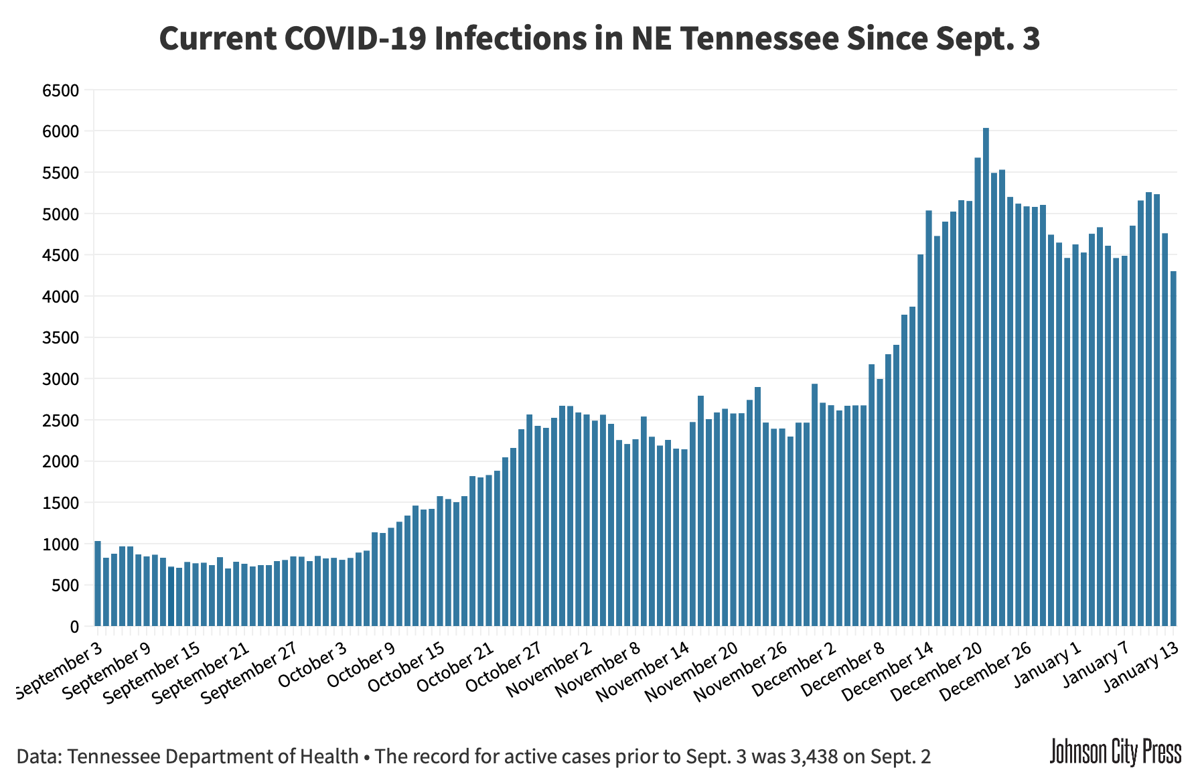 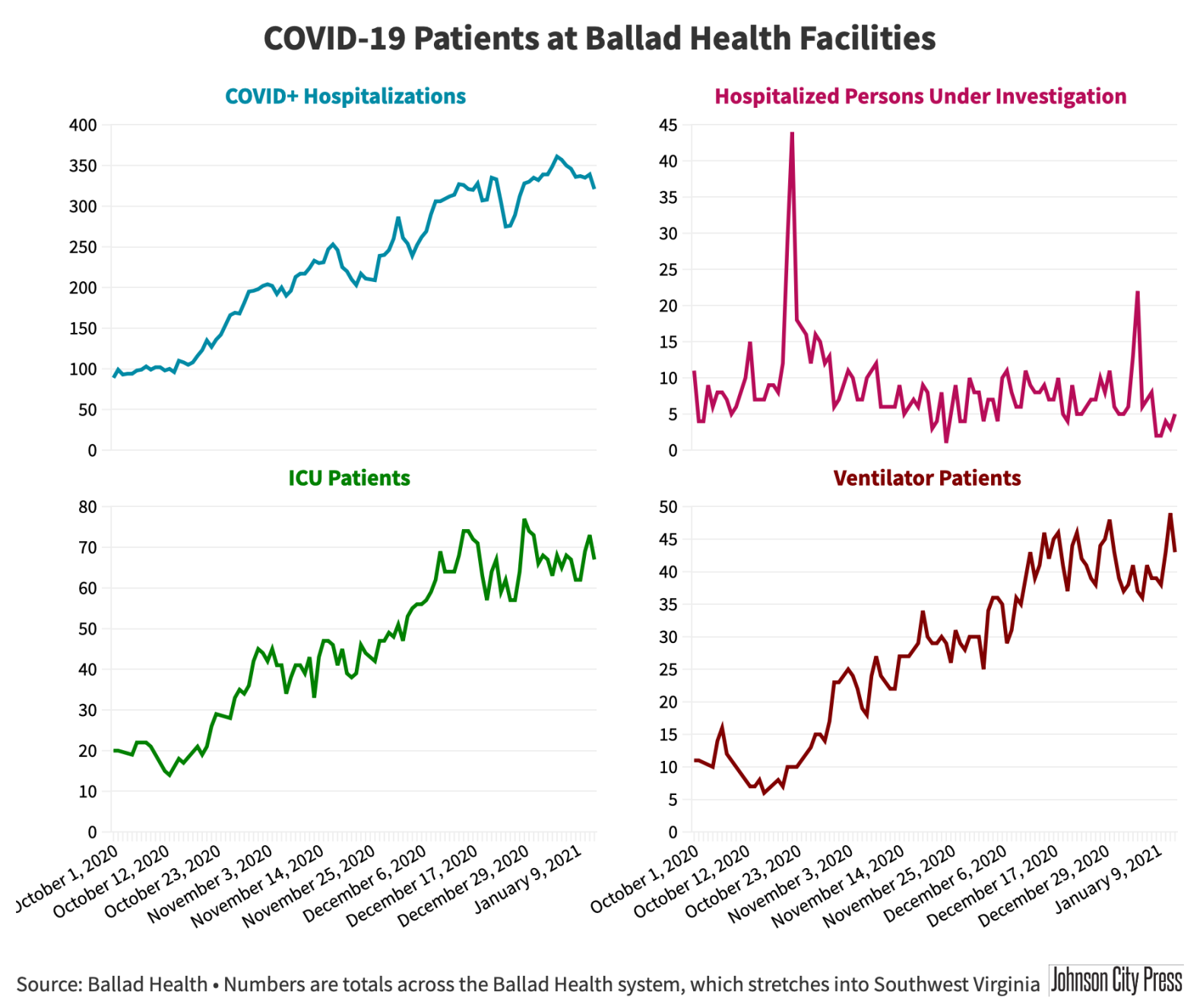 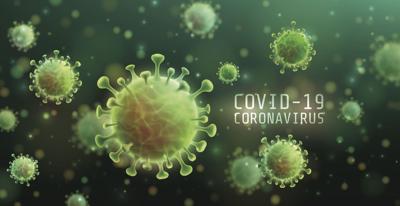 Northeast Tennessee’s seven-day average for new cases dropped to its lowest rate since Dec. 31 on Wednesday, with the region adding fewer than 300 new cases for the third consecutive day — a first since November.

Earlier in the day, Ballad Health officials expressed optimism that the recent decline in new cases was more than a mirage caused by a corresponding decline in testing, though they admitted more data is needed before they can be certain. Ballad Chief Operating Officer Eric Deaton said the hospital system is seeing some improvement in its key indicators, and attributed part of the decline to the amount of people getting vaccinated — breaking the chain of infection in the community.

“You’ll remember that right around the Christmas holiday we did see a slowdown in the number of people being tested, so we think that was probably part of the reason for the decrease in the number of positives because they’re just not being accounted for,” Deaton said. “But, we think now we’re actually seeing a decrease in actual cases start to happen, so that’s a very good sign.”

Ballad Chief Infection Prevention Officer Jamie Swift said trends could be “at the threshold” where the decline could be attributed to lower testing or the increase in people being inoculated against the virus, noting that it’s “too early to definitively say one way or the other.”

“Honestly I think we’re going to need to watch trends over the next couple of weeks,” Swift said.

Since hitting a record 671.7 seven-day average for new cases on Dec. 19, Northeast Tennessee’s new case rate has seen a steady decline down to an average of 363.4 on Wednesday — save for a brief increase between Dec. 28 and Jan. 7. Testing has also fallen sharply over that time as well, which led to a spike in the region’s positive test rate, which peaked on Jan. 9.

“I think we don’t know that we have not hit our peak — we’re not sure if we are there yet, we need to keep looking at the data,” Deaton said. “We’ve got about a week’s worth of flattening in our number of inpatients, and we’ve got about three weeks now of flat positive cases.

“I think those are good indicators at this point, but there is a little bit of a slowdown in testing which has caused some of that,” he continued. “We think it’s probably some of that, and we do think it’s because we are seeing more vaccine in the community that is breaking that chain. I don’t think we know the exact answer yet, but I think over the next couple weeks we’ll know better and better as we get more data to make that decision.”

The hospital system’s in-house modeling has the system’s inpatient census tracking more closely with the yellow line projections that projected a peak of about 350 inpatients earlier this month.

“We think that we’re probably more around that yellow line, and the decrease here really does represent more and more vaccine getting into our community and the ability to really bend that curve down,” Deaton said. “We think that’s a really positive sign we’re seeing.”

Bed capacity was also up on Wednesday with 65 (+10) available beds. There were 30 admissions and 47 discharges overnight.

The region reported its third-straight day with a decline in active cases on Wednesday, which fell to 4,304. Every county reported a decrease in active cases, with Hawkins (-106) and Washington (-119) counties reporting declines of more than 100. Carter (-57), Greene (-70) and Sullivan (-67) also reported sizable decreases.