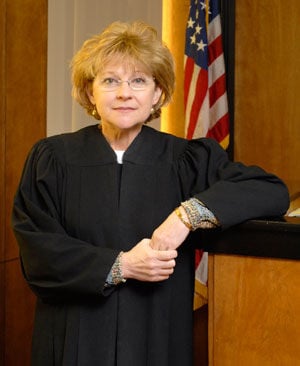 Judge Sharon Green heard evidence in a transfer hearing Friday for 17 year old charged with murder. The case wasn't completed and was reset for June 18.

Judge Sharon Green heard evidence in a transfer hearing Friday for 17 year old charged with murder. The case wasn't completed and was reset for June 18.

The attorney for a 17-year-old charged with murder in what authorities have indicated was a gun sale gone wrong this week wants to keep the media from covering a transfer hearing set in May.

Johnson City police investigators recovered 15 shell casings from the scene of a deadly shooting Wednesday, according to testimony in the teenager’s detention hearing on Thursday.

Investigator Shane Malone also testified that Darius W. Adler, 17, of Johnson City, told police he fired off 17 rounds at a man he’d arranged a meeting with to buy a gun.

He was taken to Johnson City Medical Center, where he later died.

When Adler was escorted into the courtroom, he was in handcuffs and leg shackles. After a private conversation between Green, defense attorney Scott Shults and Assistant District Attorney General Kelly Lowe, an officer removed the leg shackles, but Adler remained handcuffed. His mother and Shults sat at the defense table with him, and there were four police officers in the courtroom as well.

Prior to testimony from Johnson City Police Investigator Shane Malone, Lowe announced the state would seek to have the case transferred to adult court based on the offense and his age and that Adler remain in custody.

Also prior to testimony, Shults presented a motion to the judge regarding a juvenile procedural rule he said would give Green the avenue to keep the media out of the hearing.

In the filing, Shults said “the amount of publicity (in) this case is substantial and will likely continue to grow. This motion is brought in an effort to keep pretrial publicity down to a minimum, ensure that the accused get as fair a trial as possible, and for the safety of the accused.”

He specifically referred to a Johnson City Press article that identified Adler and reported details of the allegations that were in the charging document. The petition was obtained legally under TCA 37-1-153. It allows juvenile court records to be released to the public or media if defendants are accused of serious crimes, like murder.

Malone said the crime scene was in the middle of a parking lot and testified that Adler eventually admitted he shot King point-blank because he wanted the gun.

“He said, ‘I killed him. I shot him. I needed the money. I have no regrets,’” Malone testified. He said that statement was made at police headquarters after Adler signed a Miranda rights waiver and with Adler’s mother present.

In Adler’s previous conversation with officers before his arrest, he said he had just gotten up, Malone said, and in another statement he said he’d been up since 5 a.m. and went online to find a gun for sale and played video games until he walked out of his apartment to see what was going on.

On cross examination, Shults tried to pin the officer down on the exact conversation he had with the teenager without him having his Miranda rights read to him. There was conversation between Adler and Malone about what Adler had been doing that morning and about a vehicle sitting in the parking lot that matched the description witnesses gave police.

Malone said he did not share any evidence with Adler at that time, but during questioning at the police department information was shared with Adler as his story began to change.

After Malone’s testimony, Green found there was probable cause to hold Adler on the charges. He will remain in the Upper East Tennessee Regional Juvenile Detention Center.

She set the transfer hearing for May 7, and said she would hear arguments on the defense’s motion to bar the media from that hearing prior to any testimony.