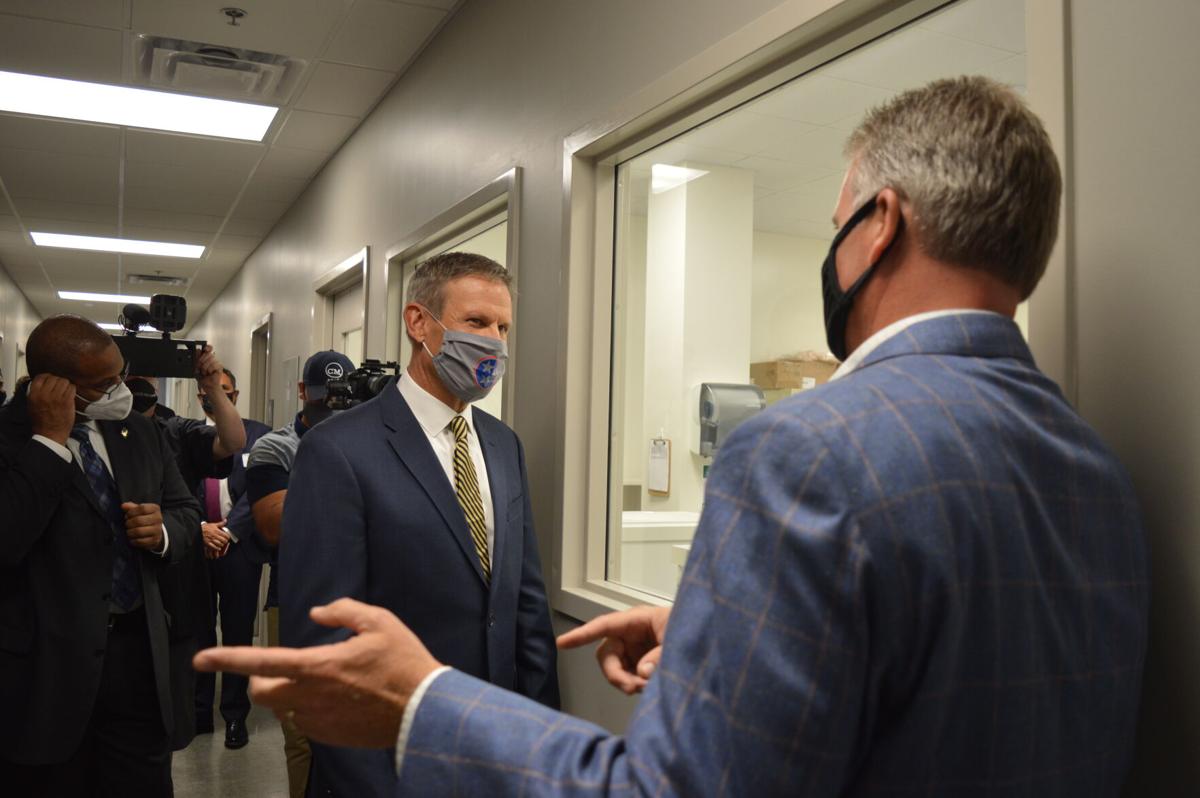 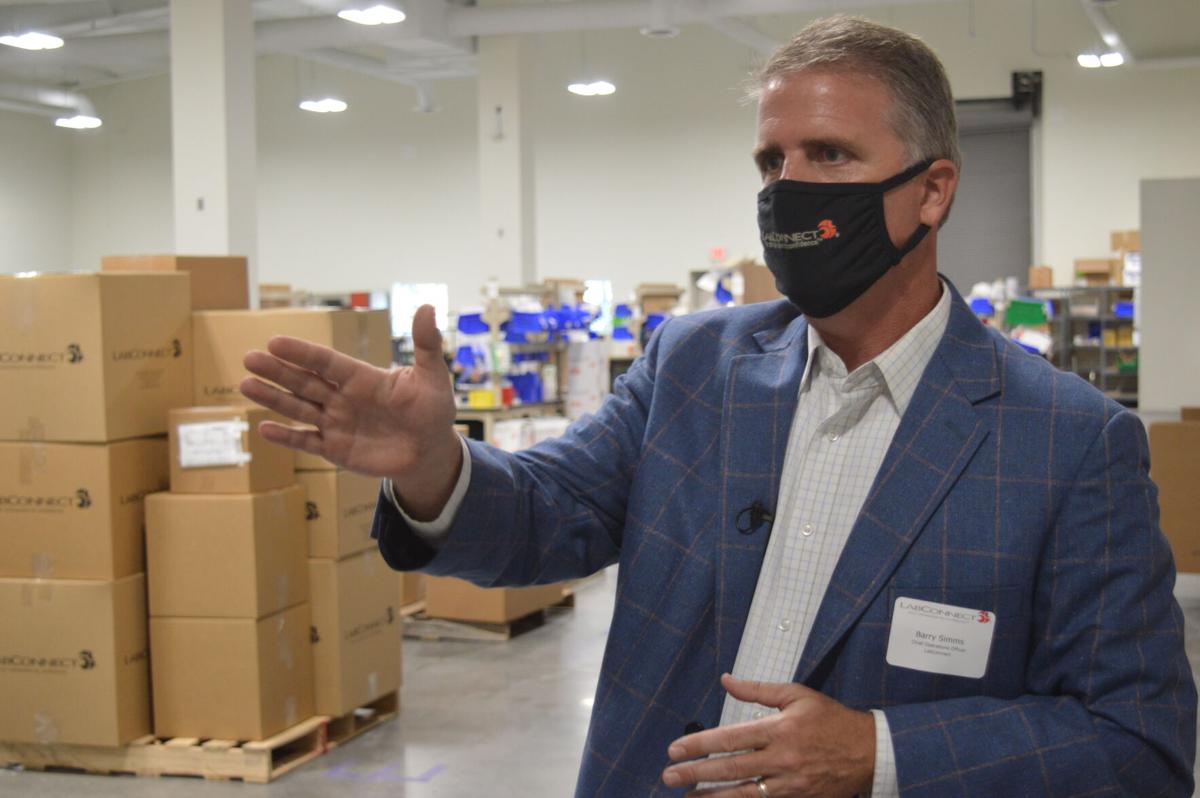 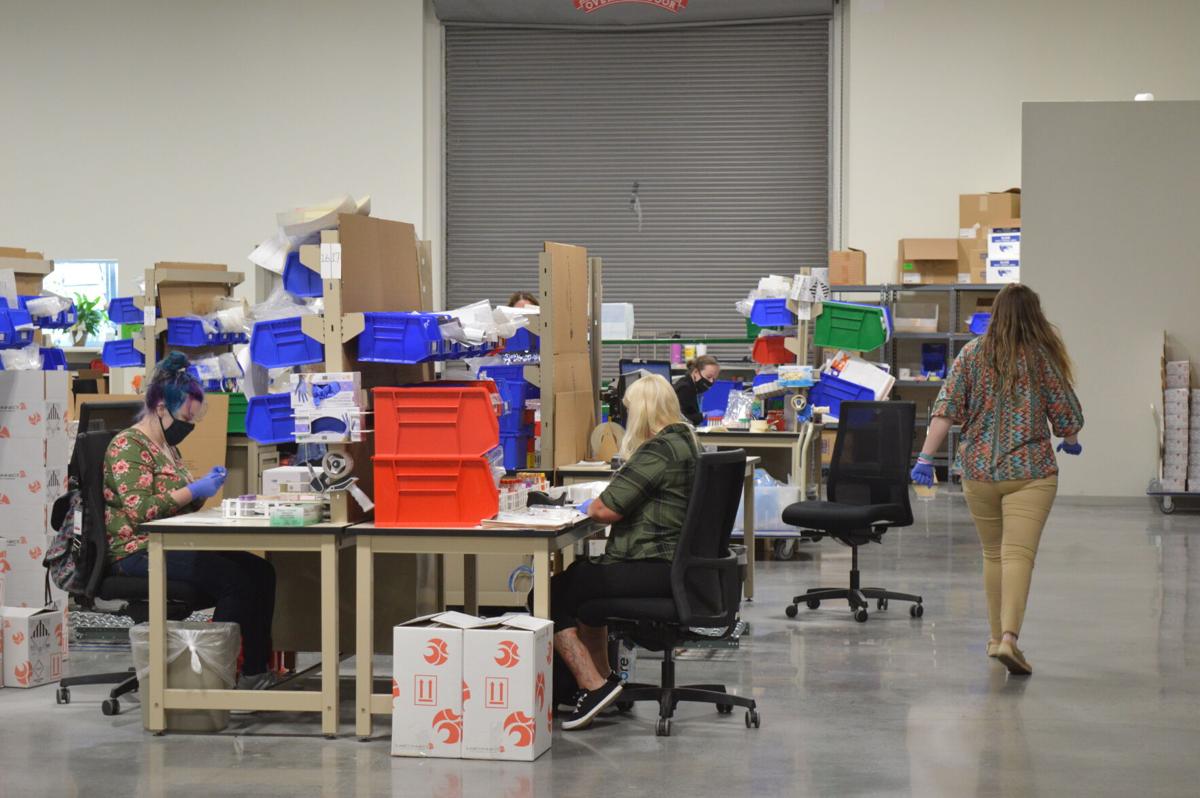 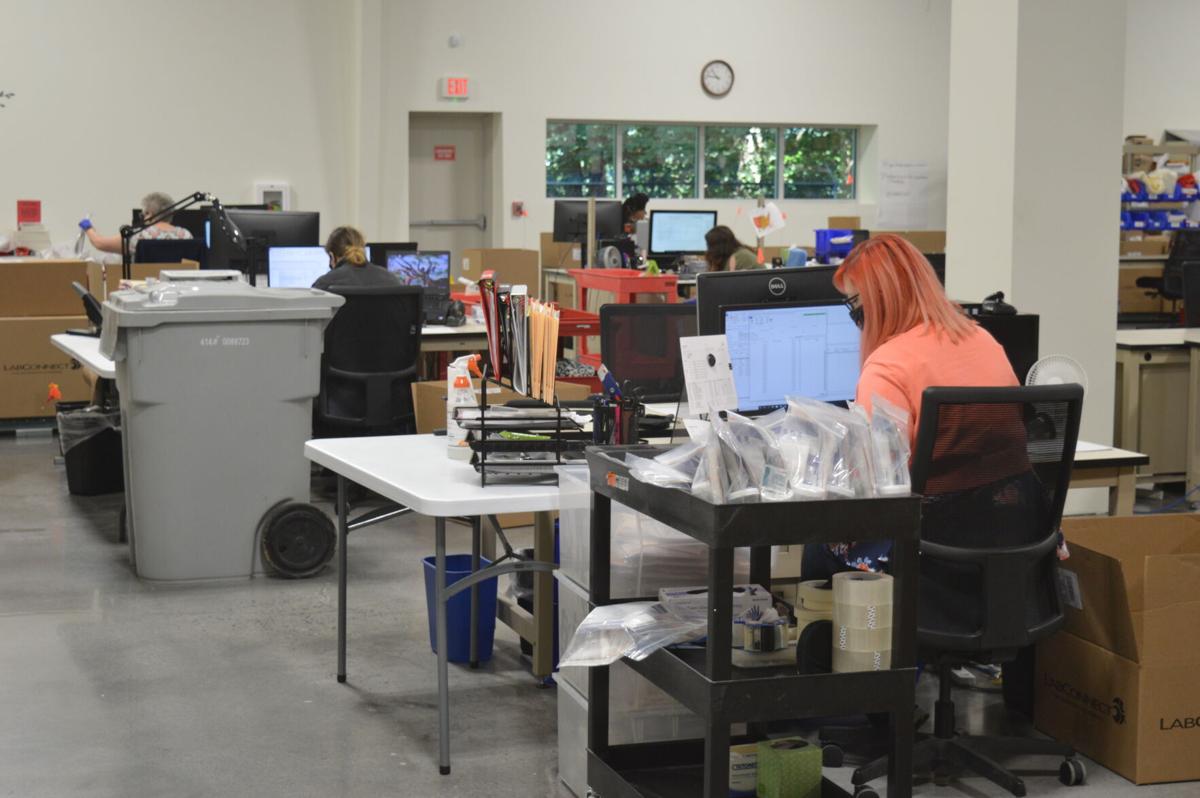 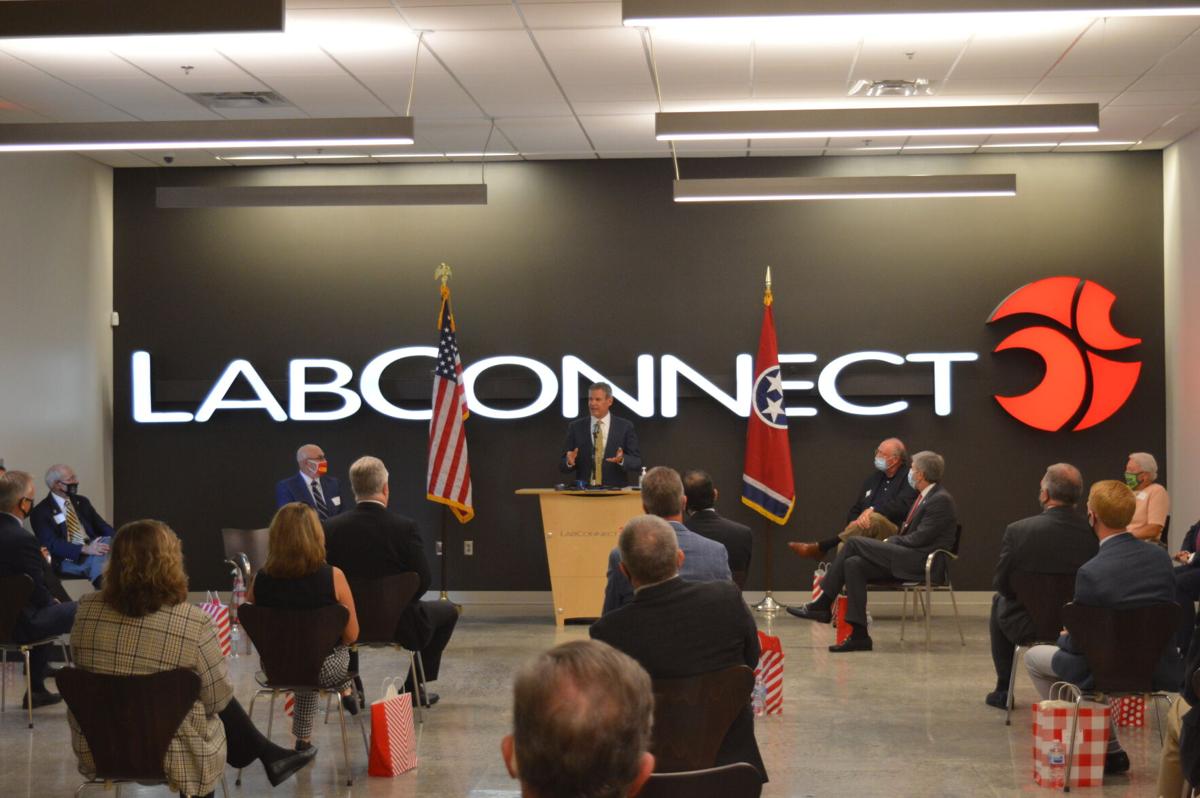 Gov. Bill Lee speaks ahead of a ribbon cutting ceremony Tuesday at LabConnect, which moved its corporate headquarters to Johnson City this year. 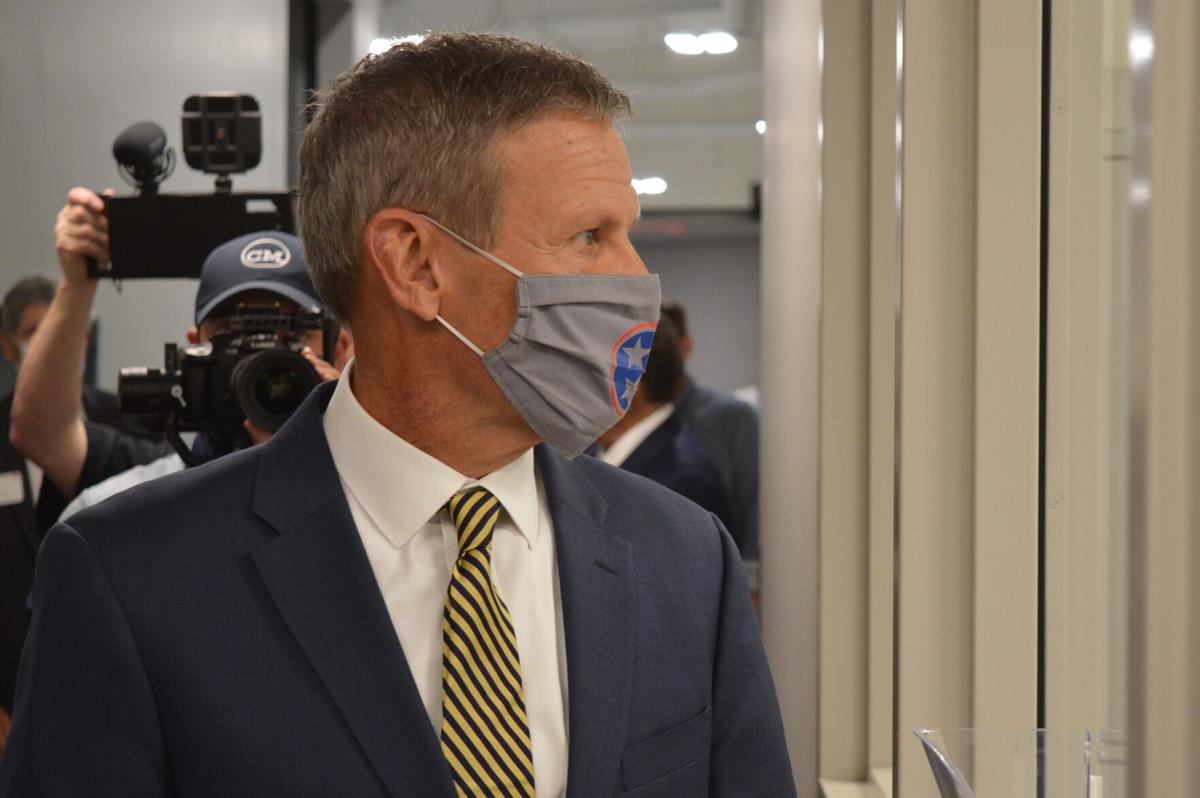 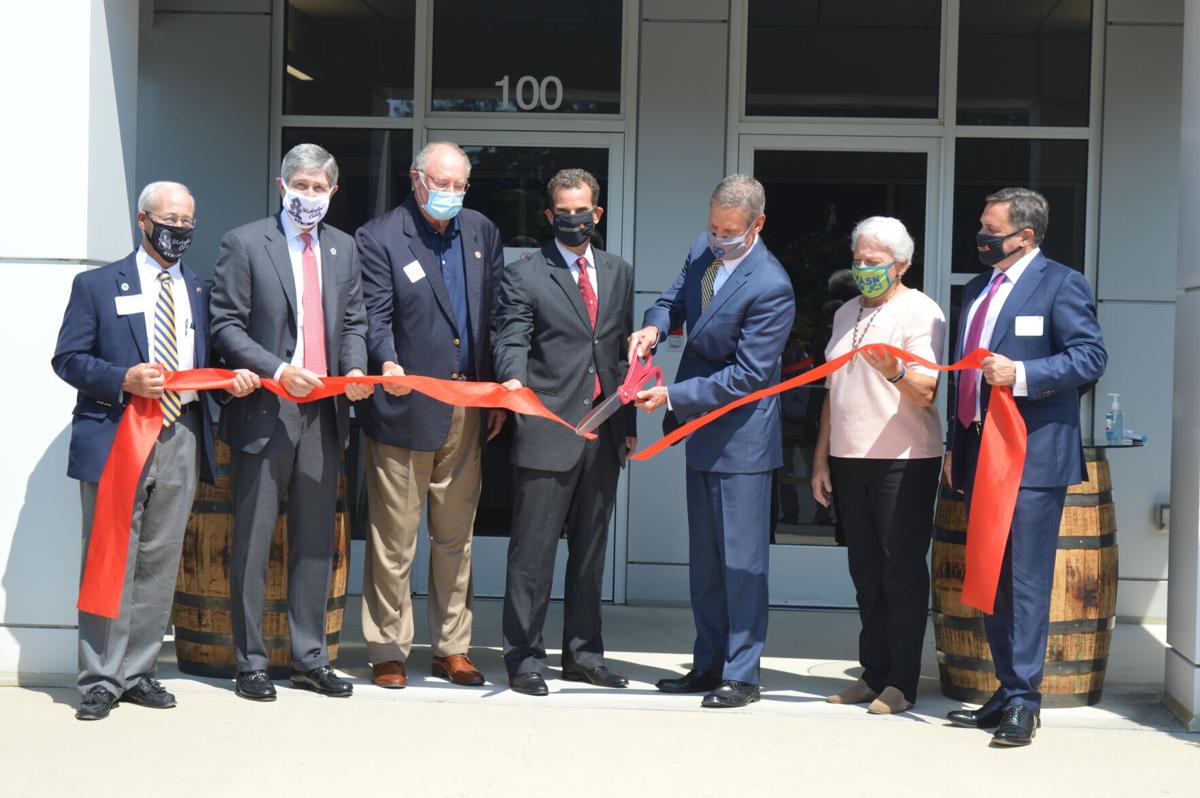 Gov. Bill Lee speaks ahead of a ribbon cutting ceremony Tuesday at LabConnect, which moved its corporate headquarters to Johnson City this year.

At a time when many companies are floundering because of the economic turmoil brought by the novel coronavirus (COVID-19) outbreak, Gov. Bill Lee joined Washington County leaders Tuesday to celebrate a medical laboratory company’s decision to move its headquarters to Northeast Tennessee.

“You already know this, but you’ve chosen a very unique corner of Tennessee that has some unique assets that are really not found anywhere else,” Lee said ahead of a ribbon cutting ceremony at LabConnect.

LabConnect, which employs about 350 people across its operations and 200 people in and around its Johnson City site, announced in April that it would be moving its corporate headquarters from Seattle, Washington, to Johnson City, a decision spurred in part by an economic incentive package assembled by the state, the Tennessee Valley Authority and the Northeast Tennessee Regional Economic Partnership.

The company is also expanding its biorepository and clinical trial kit building operations.

“We’re basically doubling our capacity,” said LabConnect CEO Tom Sellig. “With some of the grant money we’ve received, we’ve been able to expand our operations.”

“It’s really important during this COVID time,” Sellig said. “As you can imagine there’s more focus on the healthcare industry and clinical trials than ever before, so we’re certainly excited to be part of this industry and I think it’s somewhat unique for eastern Tennessee.”

The company is running 450 studies globally and works with 200 different pharmaceutical and biotech companies. Sellig said LabConnect has supported 20 studies that have made it through clinical trials, approval from the U.S. Food and Drug Administration and are on the market today.

Sellig said the company officially moved its headquarters to Johnson City earlier this year but held off on holding a ribbon cutting ceremony because of the COVID-19 outbreak.

By the end of the year, Sellig said, he expects the company will have added about 50 new jobs in the state, and the business hopes to double that in the next couple of years. Sellig said the incentive package, along with the region’s other amenities, made it attractive for the company to relocate to Northeast Tennessee.

“It’s great doing business in East Tennessee,” Sellig said. “We already had this facility here, so we’ve got a long-established relationship with the area.”

The company also works closely with Ballad Health, which Sellig said does much of the lab testing for the clinical trials that the company runs. When the company announced the relocation of its headquarters in April, Sellig also cited the area’s low cost of living and access to universities for recruitment.

Sellig didn’t go into detail about the value of the package, but said it’s essentially a combination of grants and tax incentives. Alicia Summers, the vice president of business development with NeTREP, said LabConnect has qualified for a payment in lieu of taxes agreement through the Johnson City Industrial Development Board’s capital investment program.

The PILOT, which the board approved during its July 15 meeting, will be on personal property such as new machinery and equipment.

As part of the agreement, Summers said, the company projects creating 211 new jobs over five years. It is required to create 90% of those positions, and in the event of non-performance, the company will see an adjustment of its tax abatement or PILOT.

In 2018, Chief Operating Officer Barry Simms said the company occupied an additional 18,000 square feet at the facility it inhabits on Silverdale Drive, which enlarged the company’s kit building capabilities, office space and almost every aspect of its business except for its biorepository, which LabConnect is now expanding.

When he started at the company in 2017, Simms said, LabConnect had about 164 employees total and 100 in its office in Johnson City.

“Just in about three years we’ve doubled the size of our operation,” he said.

When he visited the region a few years ago as he was considering a run for governor, Lee said, it was clear to him that communities like Washington County would play important roles in the state’s economic development.

“Not everyone wants to live in the largest of cities,” he said. “There’s a quality of life that’s available in sophisticated smaller towns that have unique assets like this part of the state that will be attractive to global companies.”

ERWIN — In a visit to Erwin on Tuesday to help Mexico-based PlastiExports cut the ribbon on its first U.S. manufacturing facility, Tennessee G…