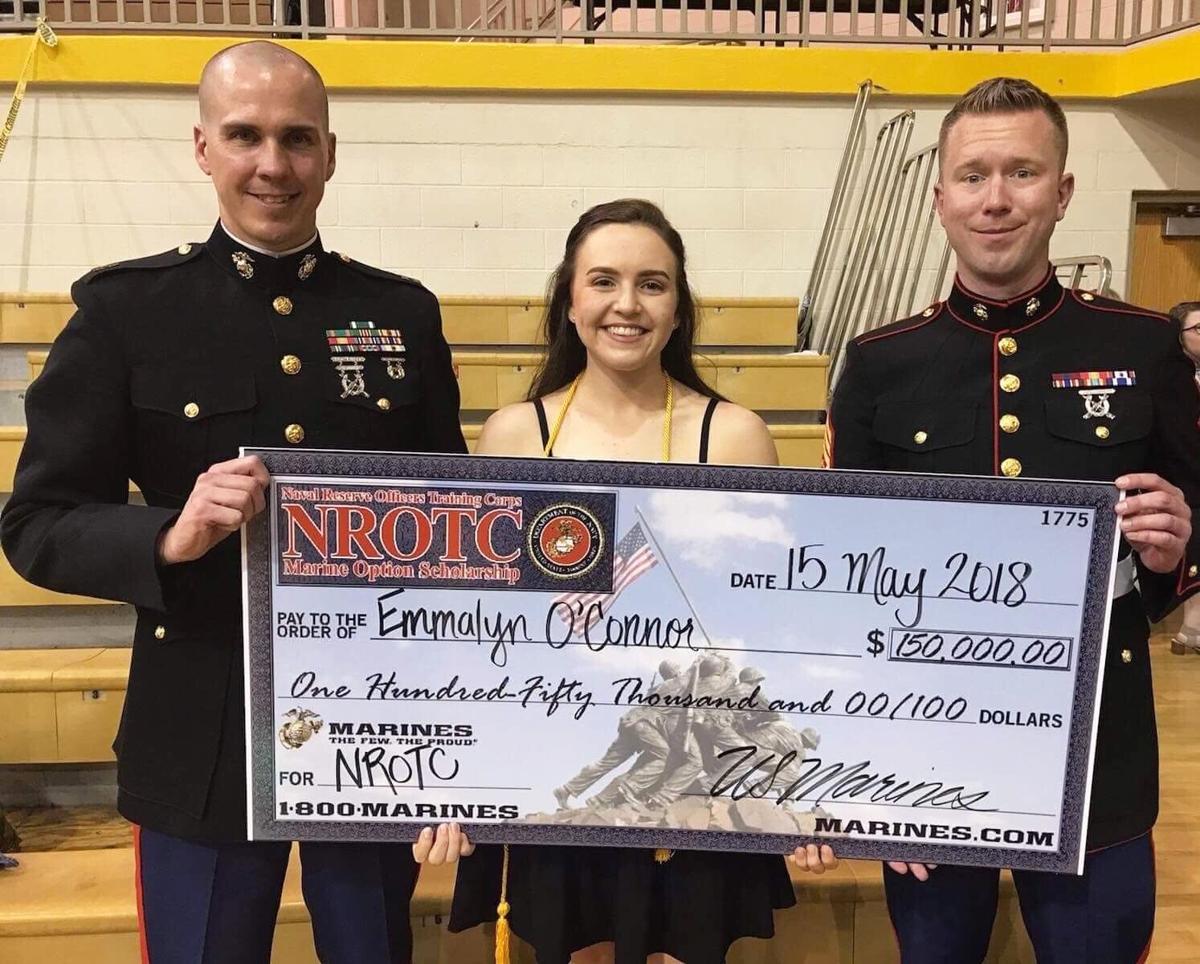 Emmalyn O’Connor is presented the Naval ROTC Marine Option scholarship while a student at David Crockett High School in Jonesborough. 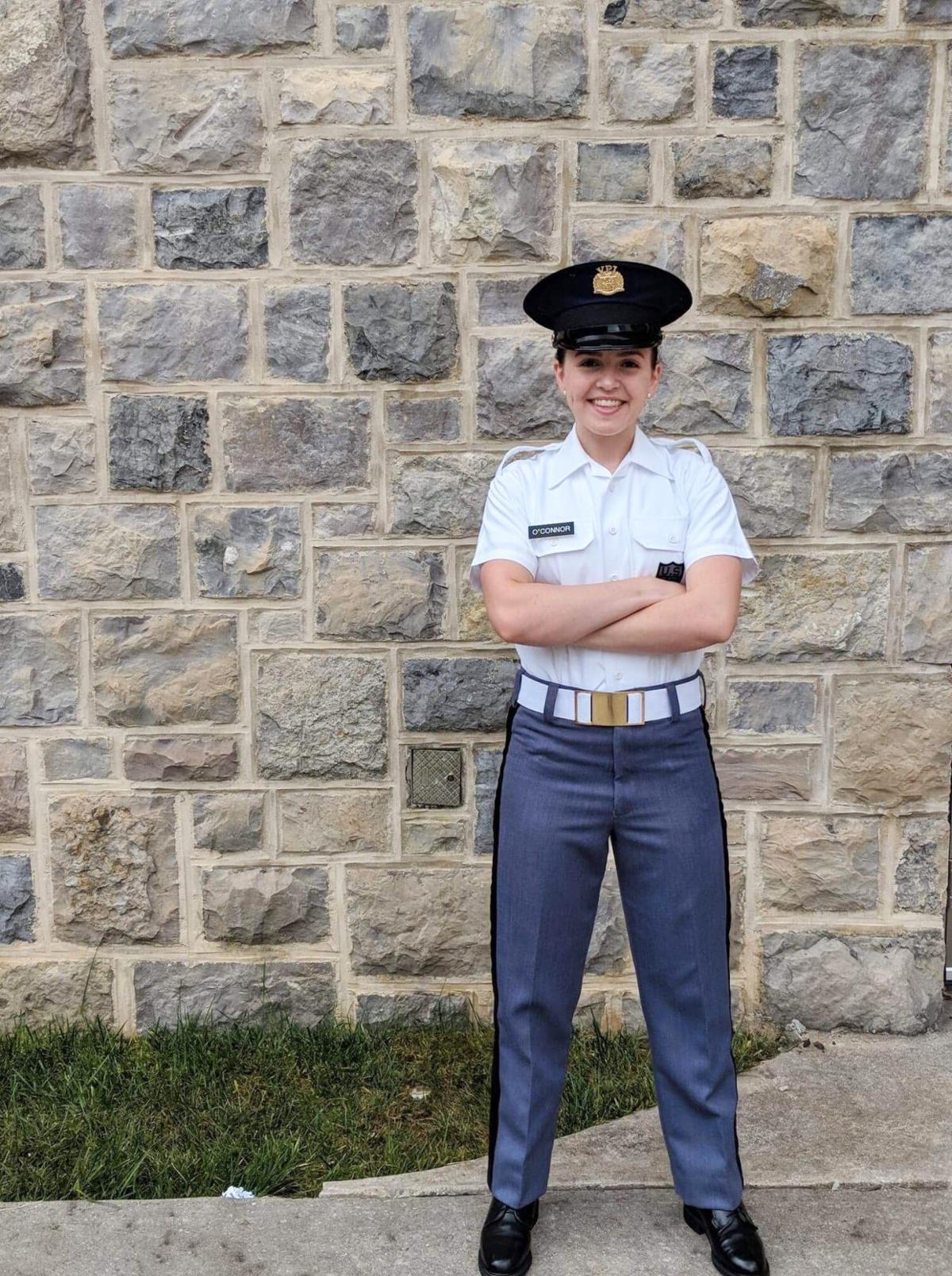 Emmalyn O’Connor, from Jonesborough, is studying as a Marine Corps cadet at Virginia Tech in Blacksburg,

Emmalyn O’Connor is presented the Naval ROTC Marine Option scholarship while a student at David Crockett High School in Jonesborough.

Emmalyn O’Connor, from Jonesborough, is studying as a Marine Corps cadet at Virginia Tech in Blacksburg,

An aspiring Marine Corps officer, Emmalyn O’Connor, 18, of Jonesborough, left her hometown in August to set out on a journey to achieve a goal she’s had since middle school.

The Virginia Tech freshman and member of the school’s Corps of Cadets and Naval ROTC Marine Corps Option moved hours away from her hometown and family to further her military career.

What gave you the opportunity to attend Virginia Tech?

“I got the Naval ROTC Marine Option scholarship that’s worth $150,000. You have to be a jack of all trades to receive it. This includes academics, leadership and physical fitness. I also had two interviews. I did one that lasted two hours in person and another over the phone.”

What inspires you to push toward your goals, and why?

“There are a number of reasons. A big part is my family. We are all pretty much Marine Corps. I will be the first officer and female Marine in my family. My grandpa, dad and brother really inspire me. I just have to do it; it’s something I’ve wanted to do since middle school — nothing else. I want to serve this country and give back.”

Where do you see yourself in a decade’s time?

“I’m not too sure yet. I could be in the Marine Corps, but that is a decision I will make once I do my time. Being in the FBI or CIA would be pretty cool, I think.”

If you could go back in time and tell yourself one thing, what would it be? Why?

“I would definitely tell myself to lead myself because I did not think that I would ever get this scholarship or be at Virginia Tech. I didn’t think I’d make it as far physically and mentally, but a lot of people believed in me. Going through high school, I had a lot of mentors who always pushed me and believed me. My family told me that I’m going to get this scholarship. I had a lot of back plans, but I ended up getting the phone call and literally cried. I’m the first-generation college student in my family, and this gave me the opportunity to achieve the goal of becoming a Marine officer. Always believe in yourself because once you do, that changes everything. If you’re confident in your abilities, then you’re set.”

•If you could meet anyone who’s either alive or dead, who would it be?

“This is really hard because there are a lot of inspirational leaders dead or alive. ... But, man. I think that I would like to meet 1st Lt. Travis Manion. He’s the one who said, “If not me, then who?” You might have to research this, but he was going on a second deployment. He ended up getting killed in action. That quote really inspires me. I remember learning of his story at a leadership conference I attended last year. He was a very inspirational individual who took that initiative that every good leader should take.”