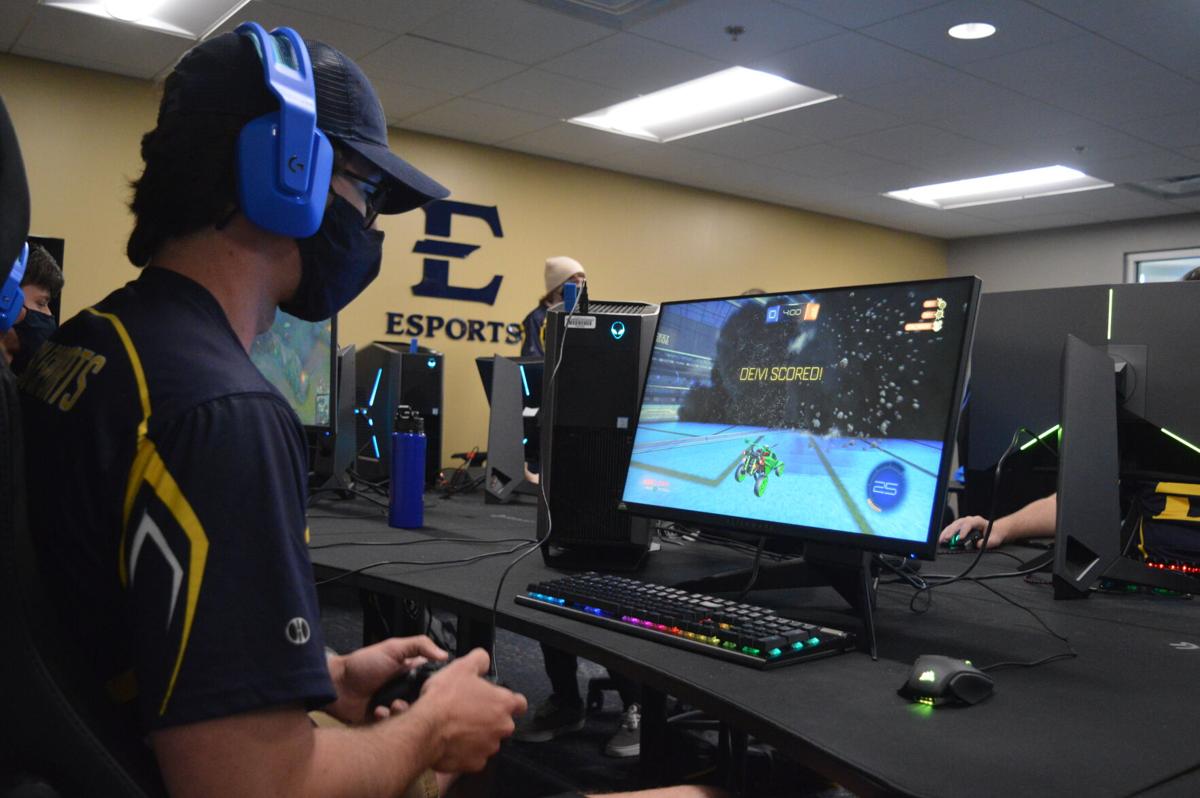 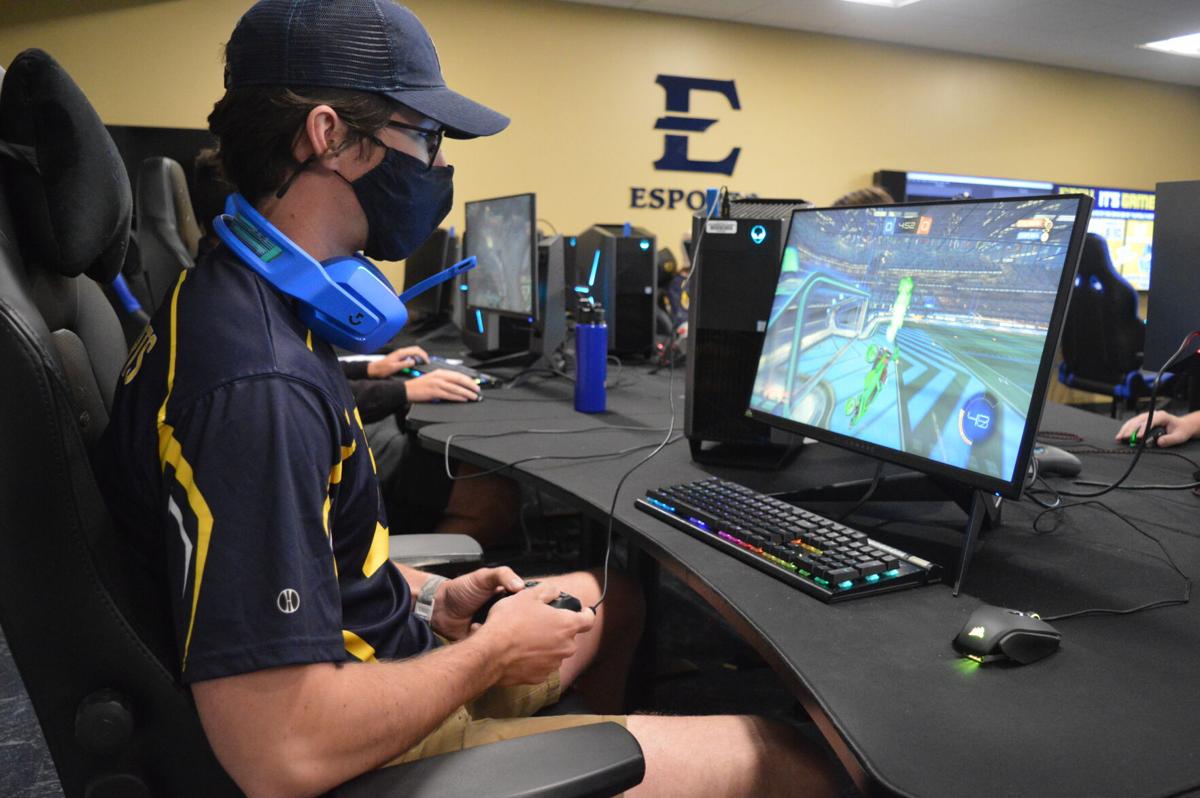 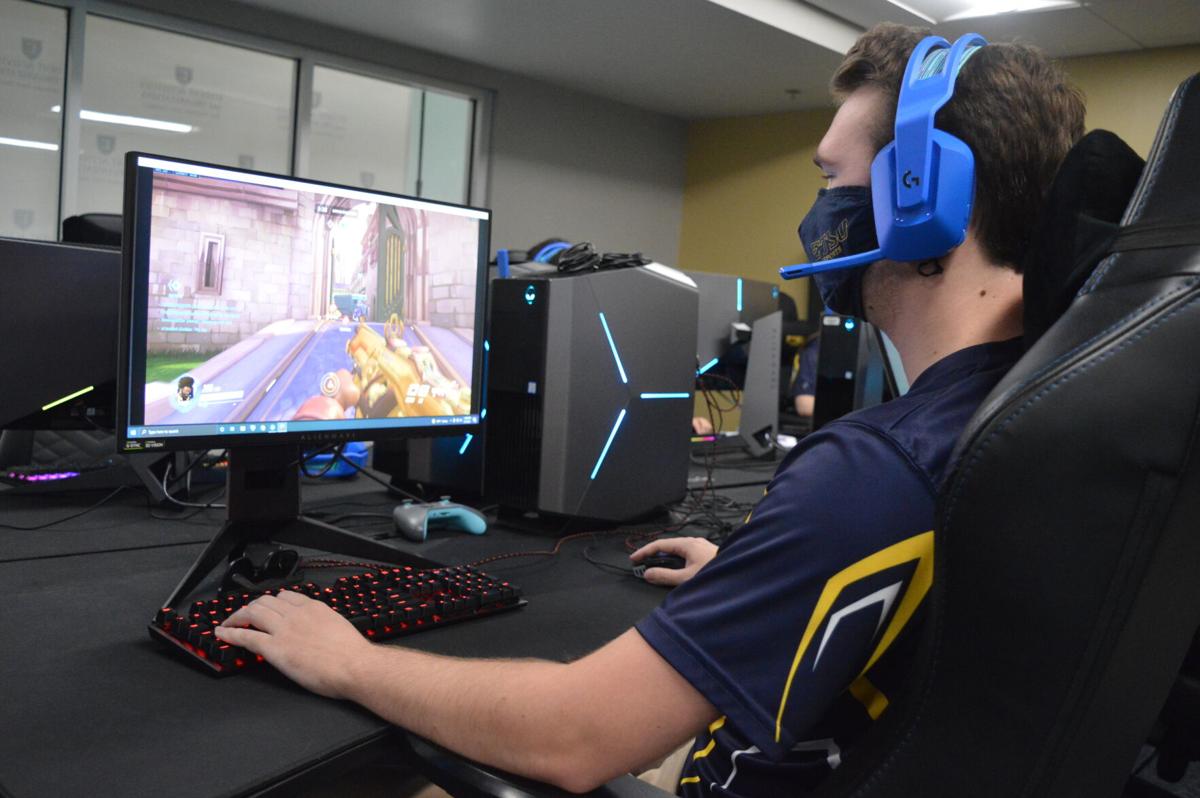 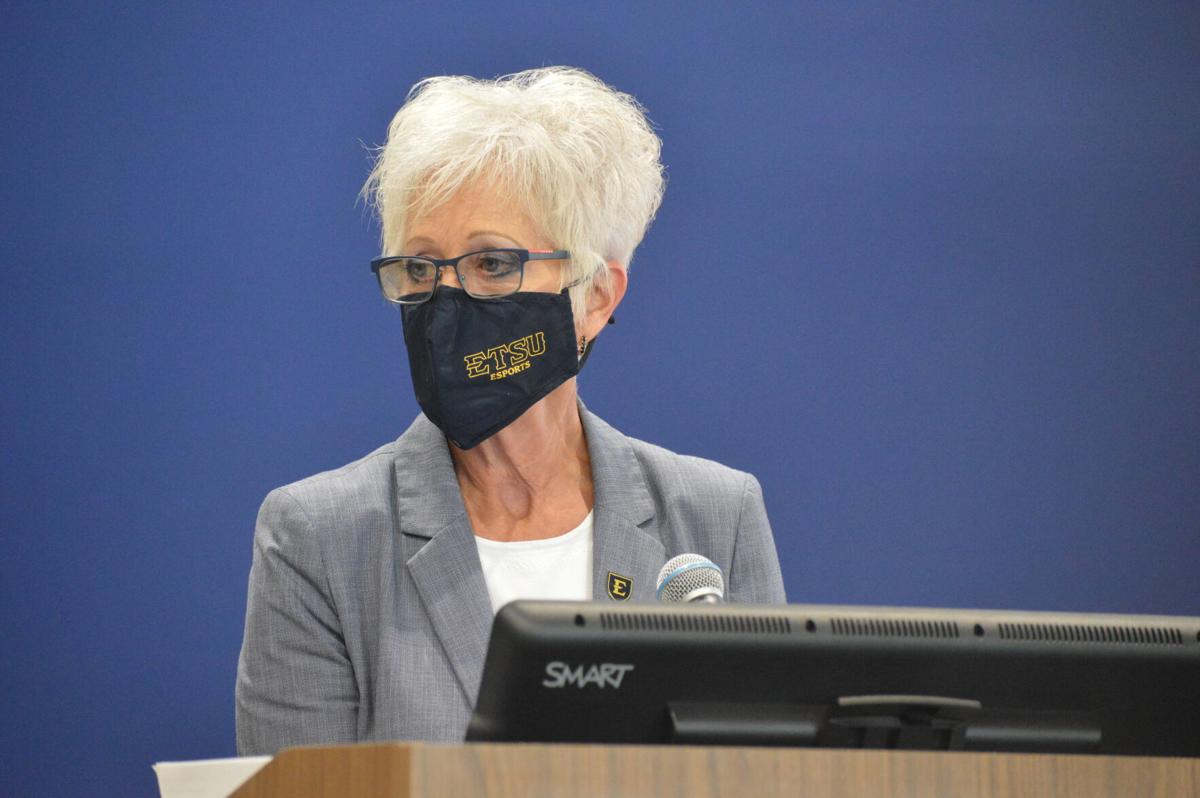 ETSU Chief Information Officer Karen King speaks during the kickoff for the competitive season of the university's "Overwatch" and "Rocket League" teams. 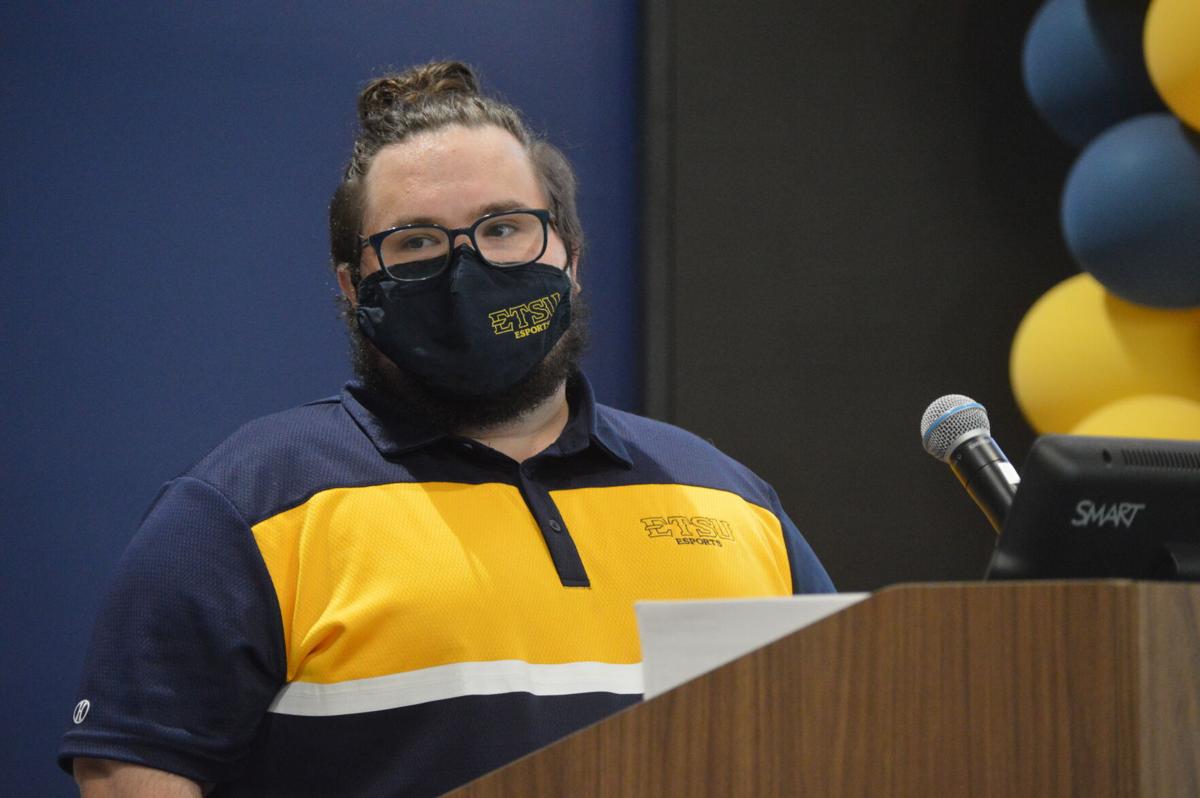 ETSU Head Coach Jeff Shell speaks during the kickoff for the competitive season of the university's "Overwatch" and "Rocket League" teams. 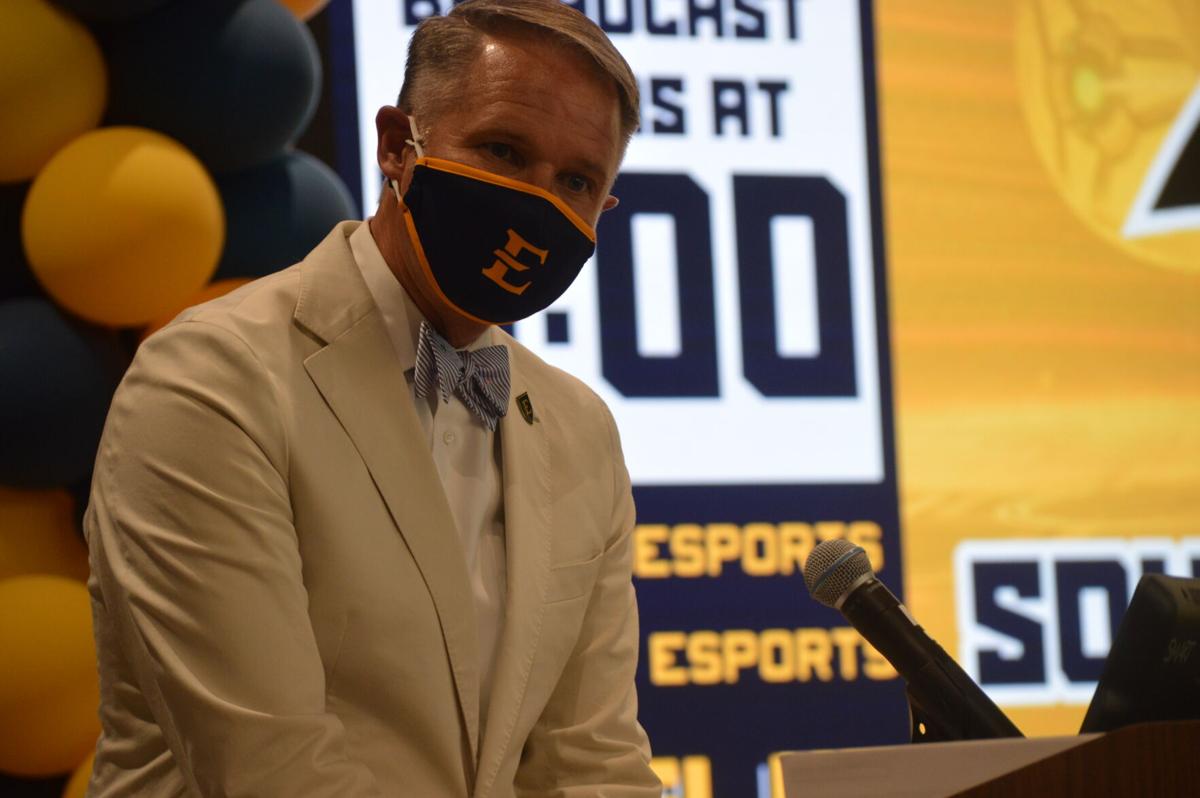 ETSU President Brian Noland speaks during the kickoff for the competitive season of the university's "Overwatch" and "Rocket League" teams.

ETSU Chief Information Officer Karen King speaks during the kickoff for the competitive season of the university's "Overwatch" and "Rocket League" teams.

ETSU Head Coach Jeff Shell speaks during the kickoff for the competitive season of the university's "Overwatch" and "Rocket League" teams.

ETSU President Brian Noland speaks during the kickoff for the competitive season of the university's "Overwatch" and "Rocket League" teams.

As soon as East Tennessee State University started its esports program, senior Connor Porch knew he wanted to be a part of it.

“I started my journey actually in ‘Overwatch,’” he said. “I knew they were having tryouts. I’d never played ‘Overwatch’ before, committed myself and made the junior varsity (team).”

His true area of expertise, however, was in “Rocket League,” a soccer-like video game played with rocket-propelled cars. He’d been playing “Rocket League” since it was released several years ago as a free-to-play game on Playstation Plus.

The university made the announcement during a press availability Tuesday afternoon in ETSU’s Esports arena, which is located in the D.P. Culp University Center Cave.

In “Rocket League,” players attempt to knock a ball into their opponents’ goal and use collectible fuel pads to boost through the air or juke around defenders.

Tyler Gregory, a freshman from Greenville, South Carolina, leads the university’s “Rocket League” team. Gregory is a “Supersonic Legend” in “Rocket League,” which is the highest attainable competitive ranking in the game.

This is the “Overwatch” team’s second season. The team recently finished in the top 16 at the National Association of Collegiate Esports playoffs, and last spring, the varsity and junior varsity teams competed in the NECC conference, making it to the playoffs and earning a top 8 finish in their division.

“Overwatch” is a first-person-shooter in which players take on unique roles, such as a burly tank or a healer, to complement the strengths and weaknesses of their teammates.

“Just two years ago esports was barely an idea ... and fast forward to today and we have three great teams,” said Karen King, ETSU’s Chief Information Officer. “And it’s really because of the accomplishments of our students that we’ve been so successful.”

Fans can follow the university’s esports program on Twitch at www.twitch.tv/etsuesports. Tuesday’s games were broadcast on that channel.

The university also announced Tuesday that four students — Chris Moser, Colleen Sharkey, Levi Everroad and Spencer Jedrzejk — will serve as the casters for the “Overwatch” and “Rocket League” games.

ETSU’s third esports team, which competes in an online battle arena game called “League of Legends,” will start its competitive season in January 2022.

President Brian Noland said the student body brought the idea of an esports team to ETSU administrators, which he said King helped mold into something meaningful.

“When we were planning for our esports program, none of us could have anticipated the global pandemic and what it would bring,” Noland said. “But ... people stood behind this idea of starting this esports program, and not even COVID-19 could get in the way of making that dream a reality.”