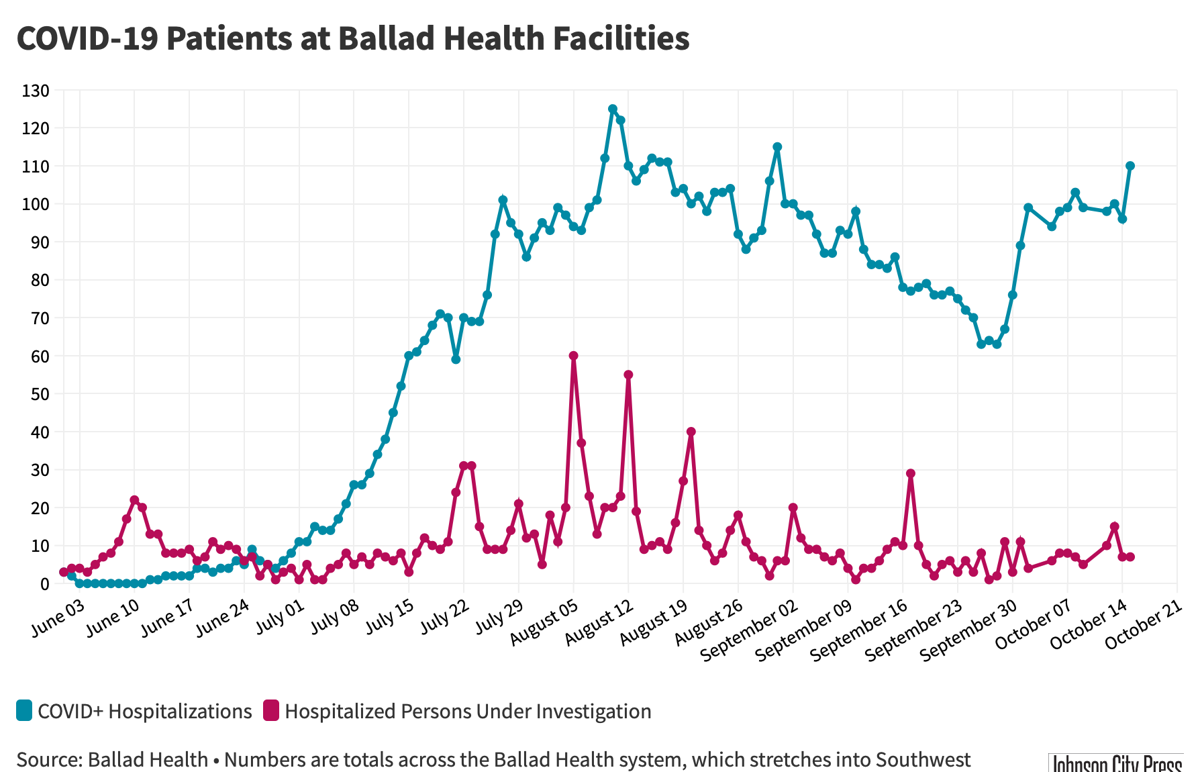 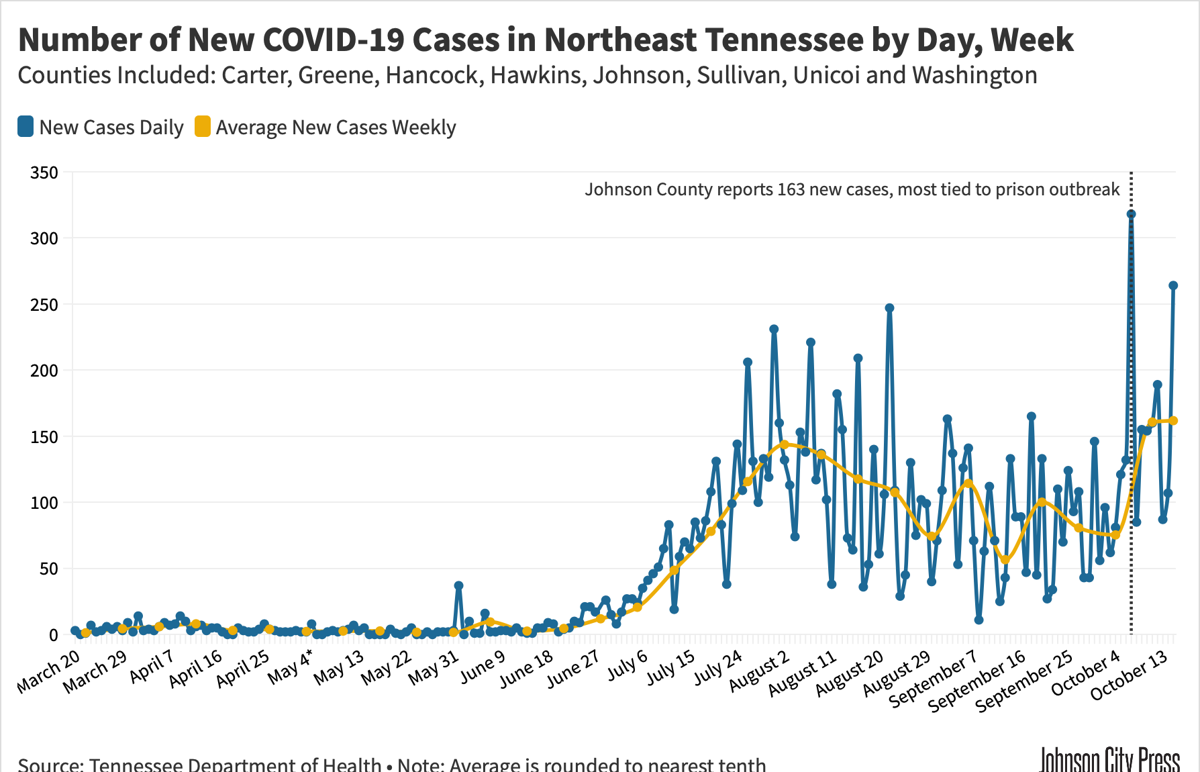 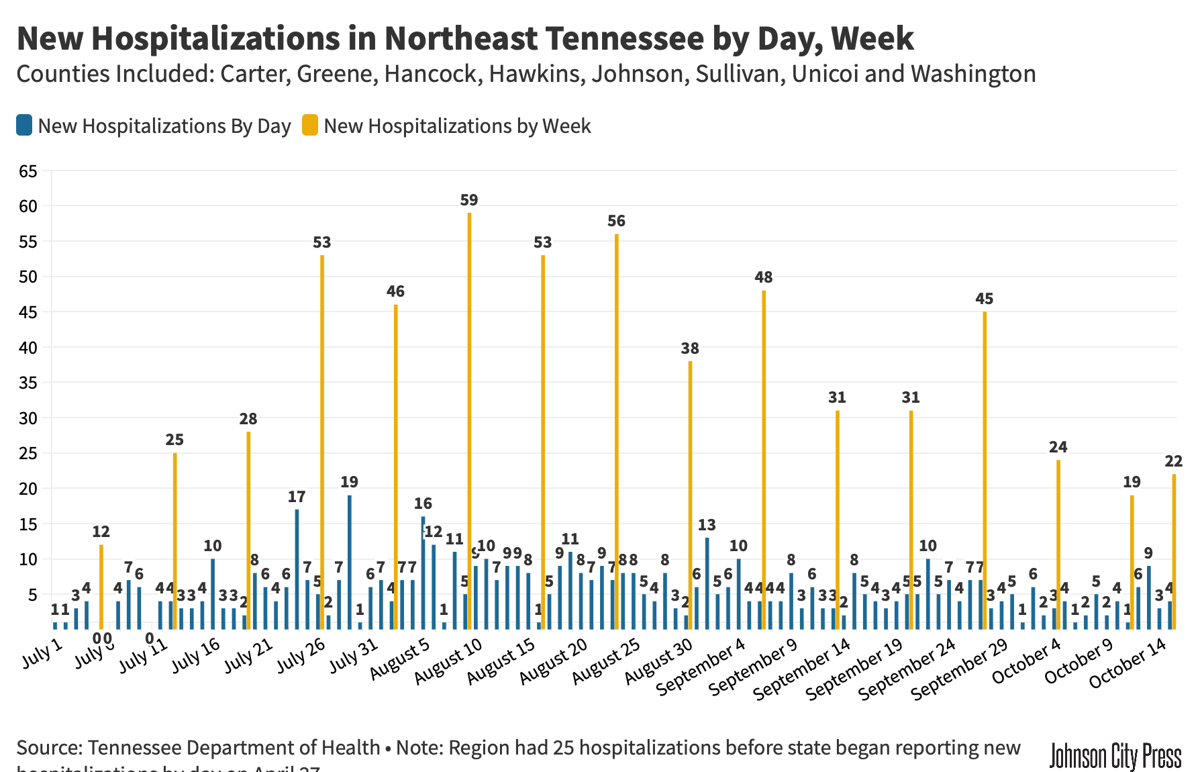 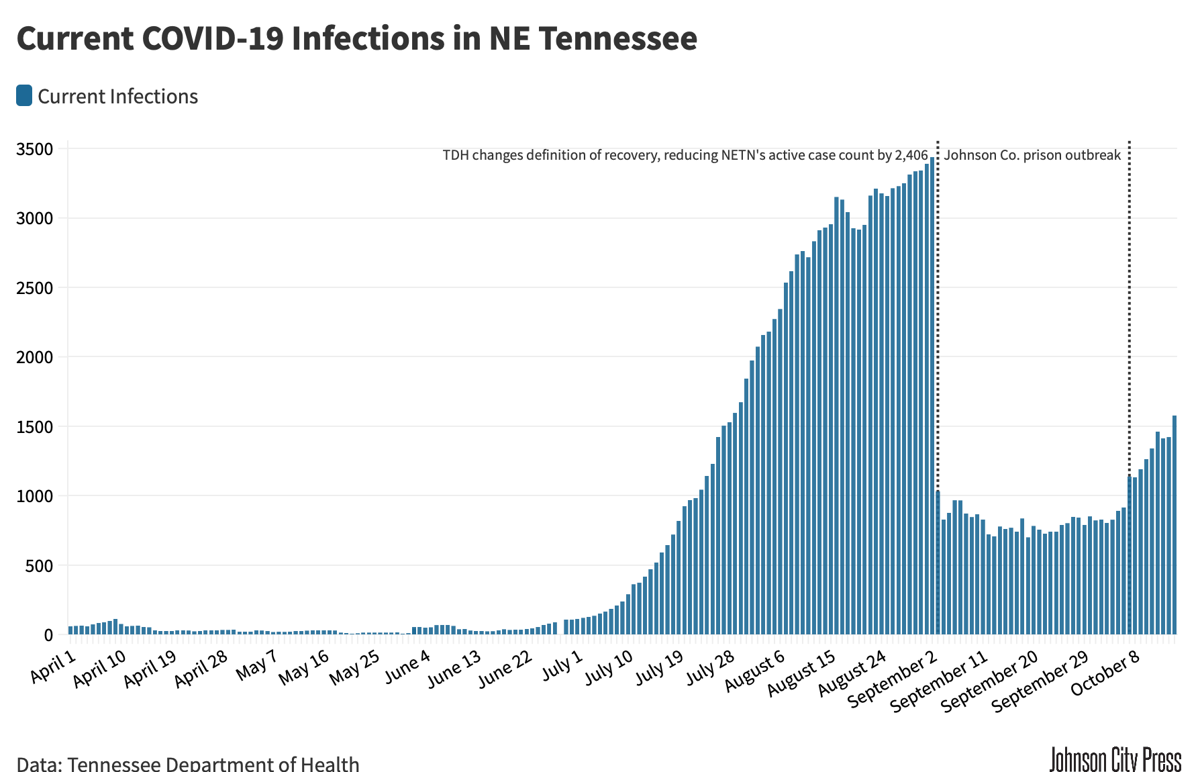 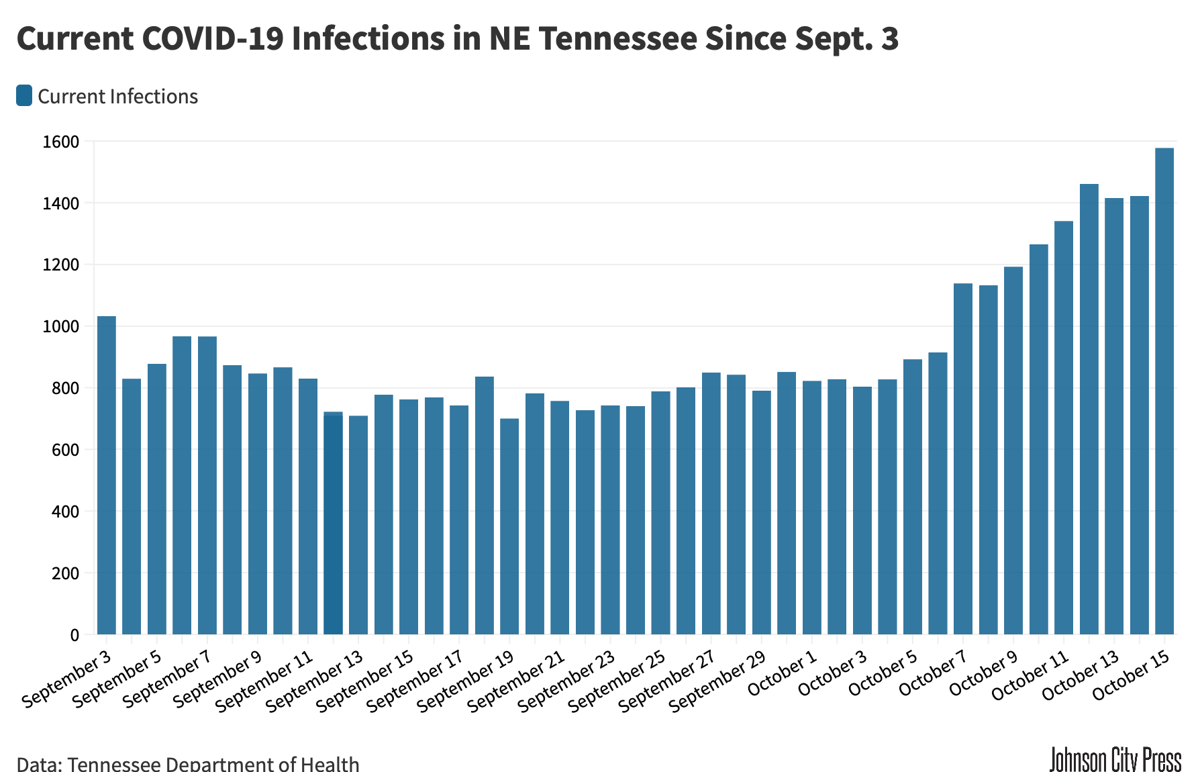 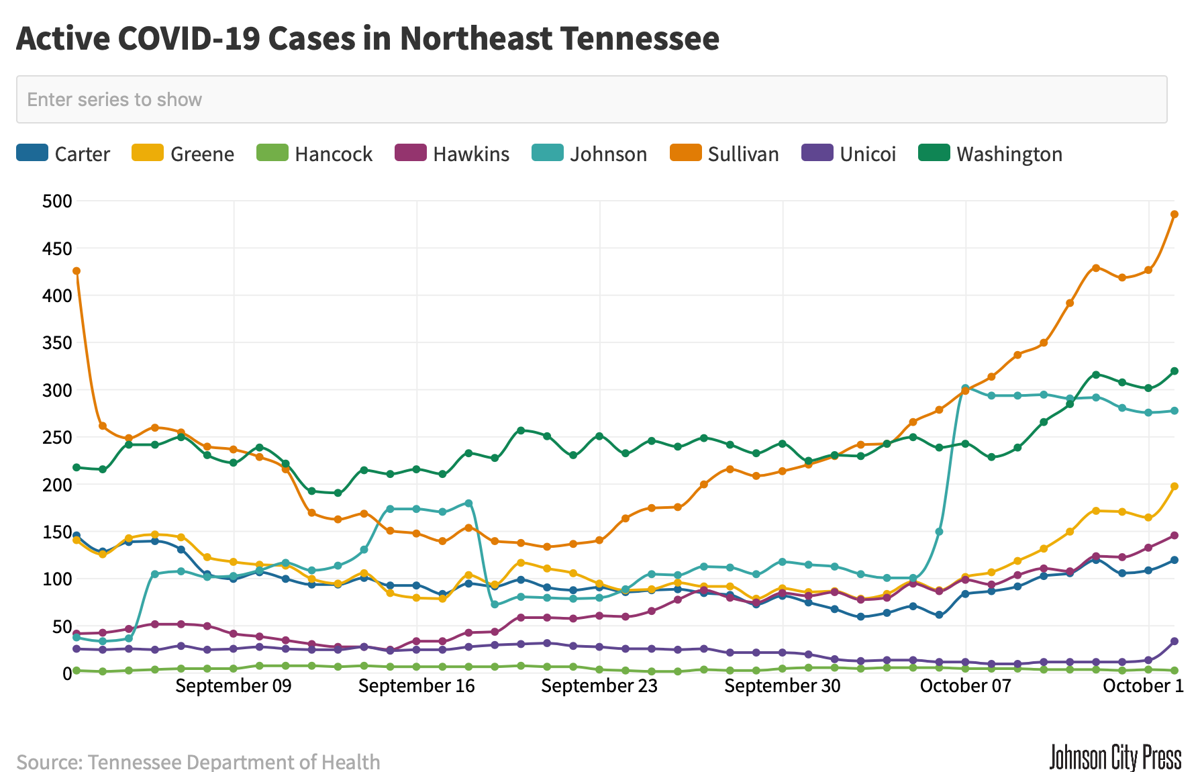 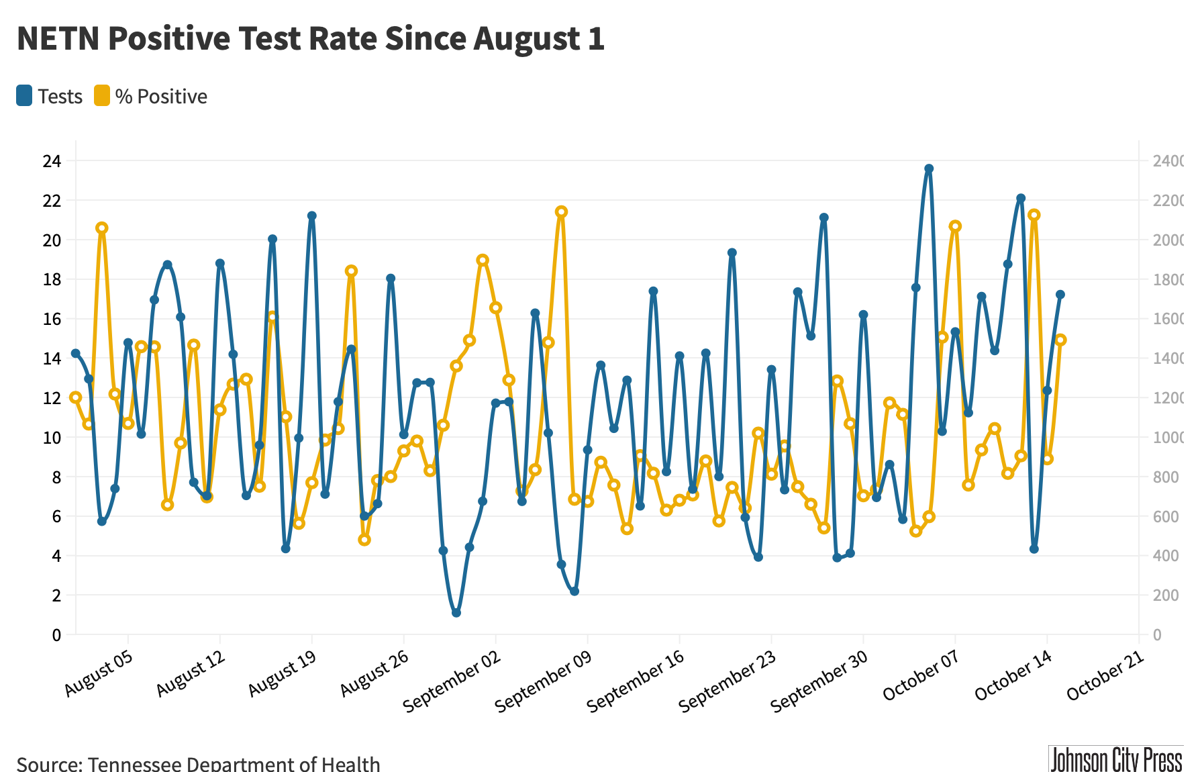 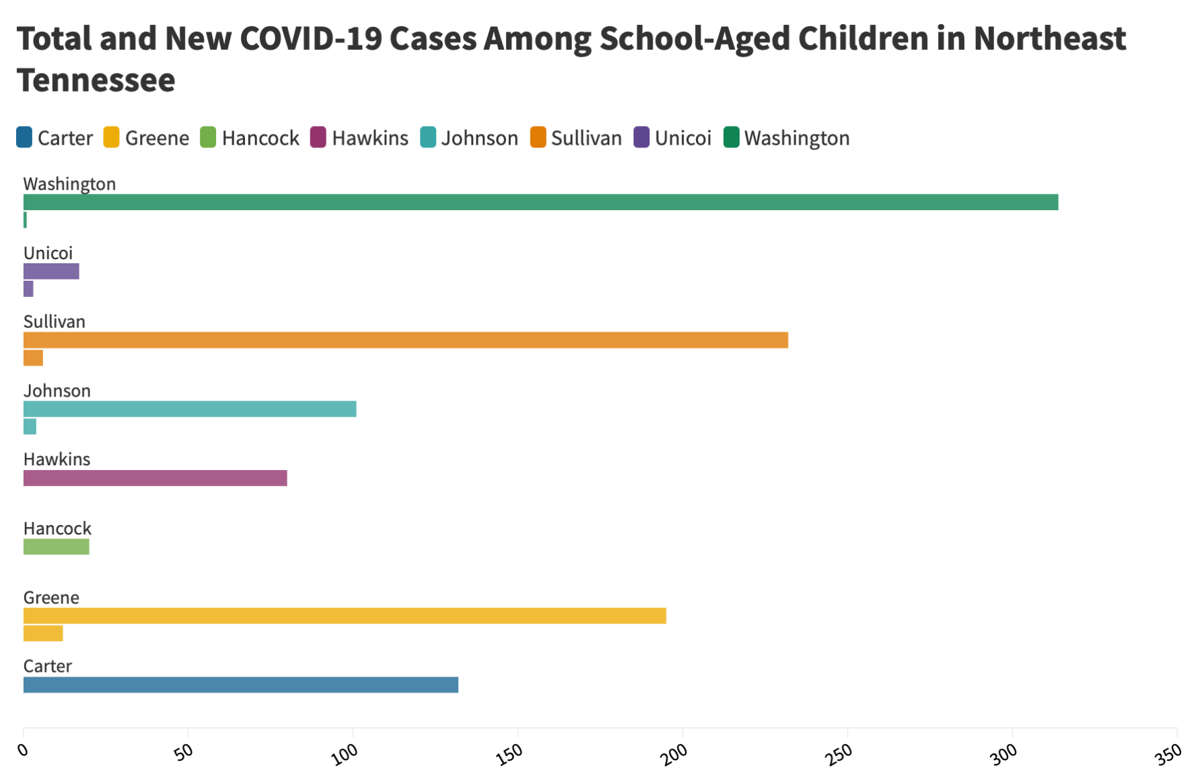 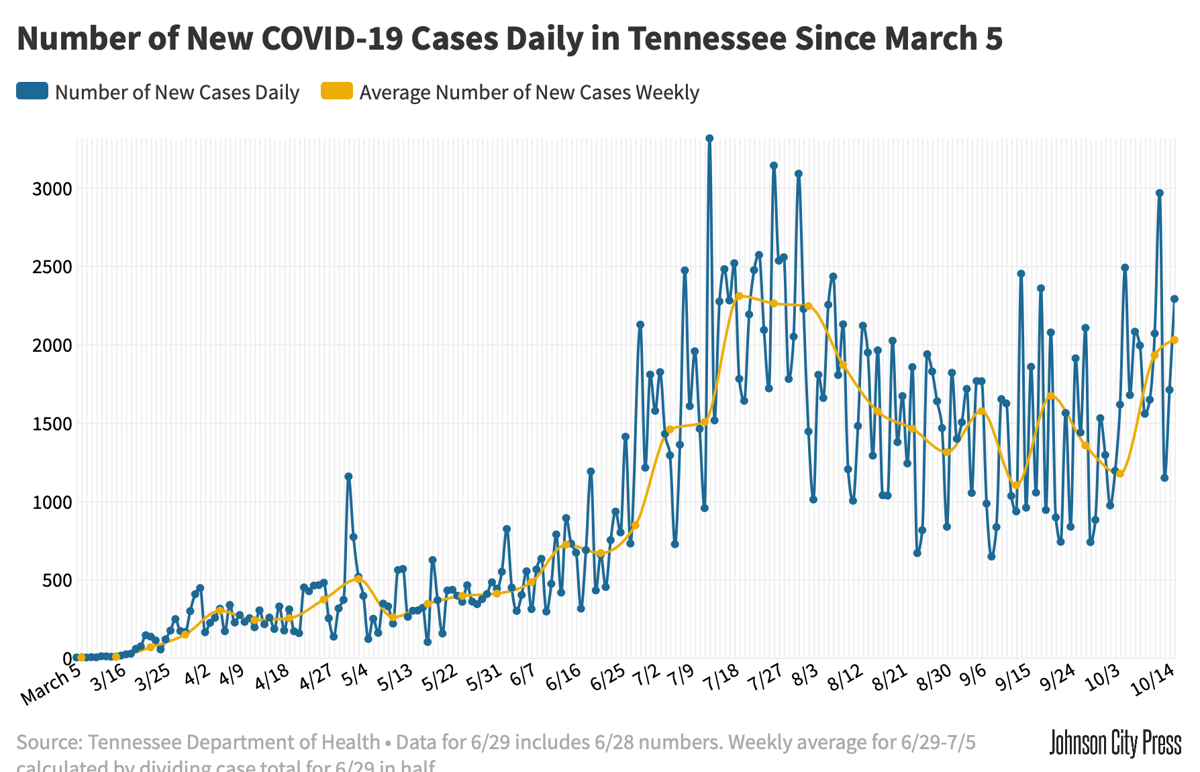 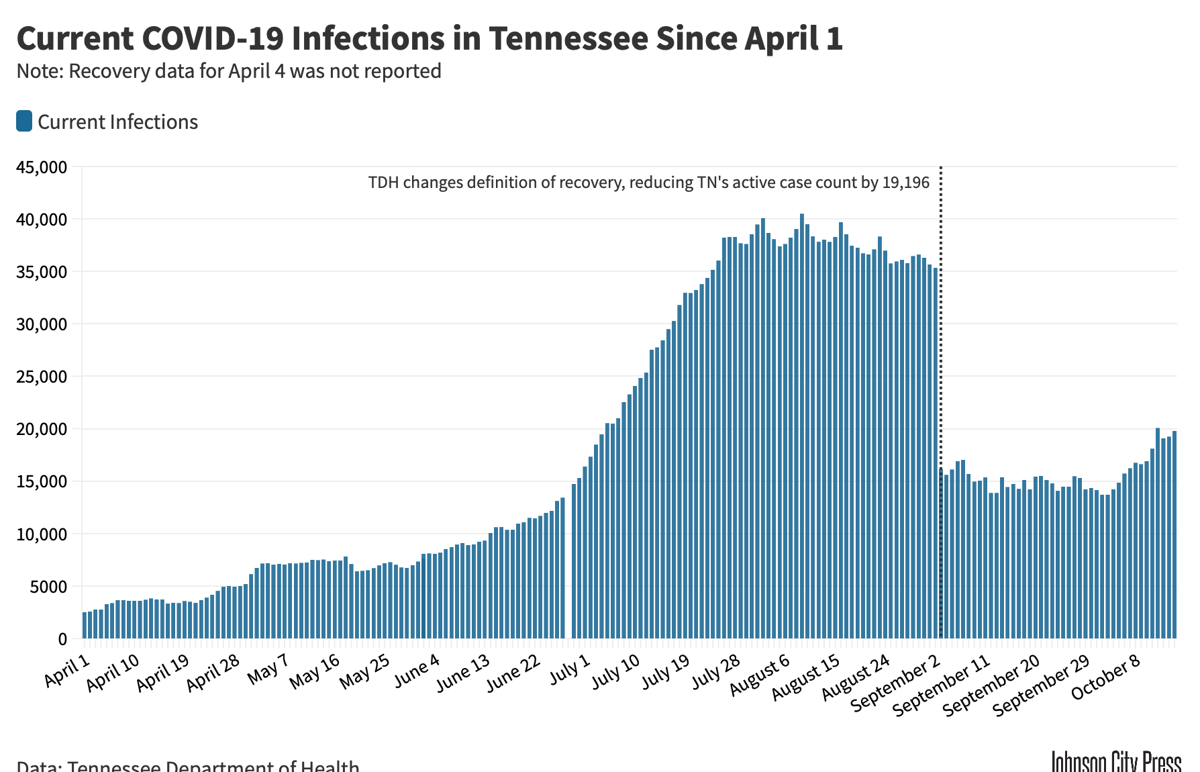 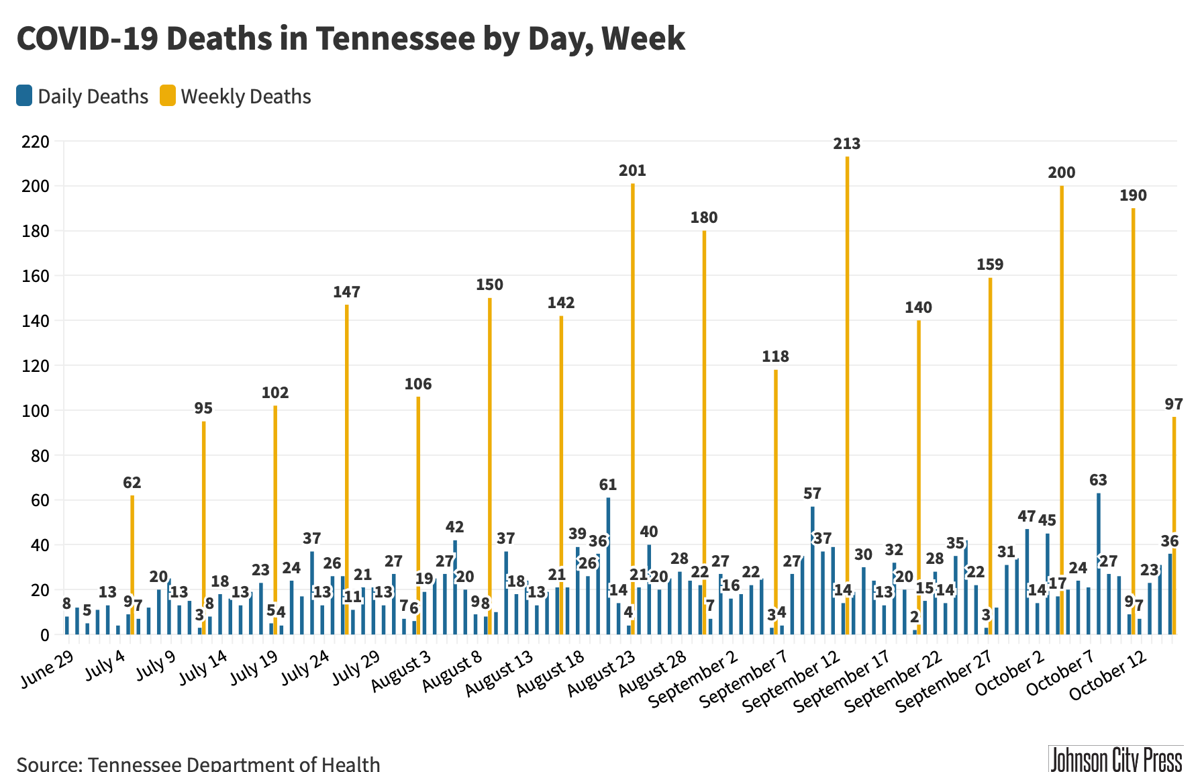 Northeast Tennessee reported 264 new novel coronavirus infections on Thursday, the second-most in a single day. The total trails only the 318 reported on Oct. 7, though most of the cases reported then were related to an outbreak at a local prison.

The surge of new cases comes as Ballad Health reported a near-record jump in hospitalizations, which are now at their highest point in nearly two months.

By nearly every metric, Thursday was a bad day for Northeast Tennessee. The 264 new cases are the second-most ever reported, with three counties — Greene (+52), Sullivan (+84) and Washington (+54) — reporting more than 50. It is the sixth time the region reported more than 200 new cases, two of which have occurred in the past two weeks.

As a result, active cases reached a record-high level since the state changed how active/inactive cases are reported, increasing by 155 — the second-largest single-day jump the region has reported, again behind only Oct. 7’s increase. Seven of the region’s eight counties reported an increase in active cases, with six reporting more than 10 new active cases.

Also of concern is the region’s positive test rate, which was at 14.92% of 1,722 tests on Thursday, the fourth-highest rate this month. Since Monday, 11.5% of the region’s tests have come back positive. Five counties reported positivity rates greater than 10% on Thursday, while only three were below that threshold.

Ballad Health’s COVID-19 hospitalizations increased by 14 on Thursday, shooting up to 110 — its highest point in almost two months. The 14-patient increase is the second-largest single-day increase the system has reported, and comes just one day after Ballad Health officials warned that hospitalizations could reach record levels following the region’s recent spike in cases.

“That is very much a concern,” Ballad Health Chief Operating Officer Eric Deaton said of the rise. “That’s what we’ve talked about since April, is the stress that this puts on our health care system across the region.”

During Wednesday’s briefing, Deaton said the system could see between 90 and 120 new hospitalizations over the coming weeks, which could push the number of hospitalizations to peak or near-peak levels of 125 to 130, or “basically the highest we’ve seen so far,” Deaton said.

Of those hospitalized, 18 are in intensive care and eight are on ventilators, both are slight increases from the previous day. There were 22 available COVID-19 beds, a drop of four from Wednesday.

There were four new hospitalizations reported in the region on Thursday: Two in Washington County and one each in Carter and Sullivan counties.

The region reported 26 new cases among school-aged children on Thursday, with Greene County reporting the most with 12 new cases. Other counties reporting new cases were: Johnson (+4), Sullivan (+6), Unicoi (+3) and Washington (+1).

Since Monday, East Tennessee State University has reported five new cases of COVID-19, and has an active case count of 10 — one higher than Tuesday’s total. All of those currently infected are students. There were 14 people quarantined in ETSU housing as well, a drop of one from Tuesday. That total can include confirmed cases and those awaiting test results.

Two new cases were reported on Wednesday, bringing the overall total to 257: 214 students and 43 staff members. ETSU updates its data on weekday evenings, and this data is from Wednesday night.

The Veterans Affairs facility at Mountain Home reported one fewer active case than on Wednesday, dropping its total to 71 — still well above its totals in the high 30s it reported last month. Mountain Home has reported 565 (+2) total cases, of which 463 (+4) are considered inactive. Thirty-one have died.

Cases attributed to Mountain Home reflect people tested or treated at the facility for known or probable COVID-19 infection. Mountain Home officials are not saying where the deaths or cases are concentrated, citing privacy concerns, but did say cases are reflected in data released by the state daily.

Hospitalizations statewide have been rising steadily in recent days, leading to a drop in hospital capacity in the state. According to state data, there are only 206 (10%) available ICU beds, and 1,786 (15%) floor beds available. The 1,149 hospitalizations reported as of Wednesday is also a near-record for the state, though there are just 108 hospitals reporting data on Thursday, three short of the 111 that typically report. In addition to the confirmed cases in the hospital, there are 182 awaiting test results.

There were also 36 new deaths reported on Thursday, the most in just over a week. It brought the death toll since Monday to 97, though this week is on pace to fall short of last week’s death toll by a considerable margin.

With 2,289 new cases on Thursday, the state’s streak of consecutive days with more than 1,000-plus new cases was extended to 12 days; the record is 19. Through four days this week, the state is averaging more than 2,000 new cases per day, more than last week but still below the record numbers recorded in July and August.

Active cases increased statewide by about 550 on Thursday to 19,799 — just 273 shy of the post-reporting adjustment record of 20,072 reported on Monday.