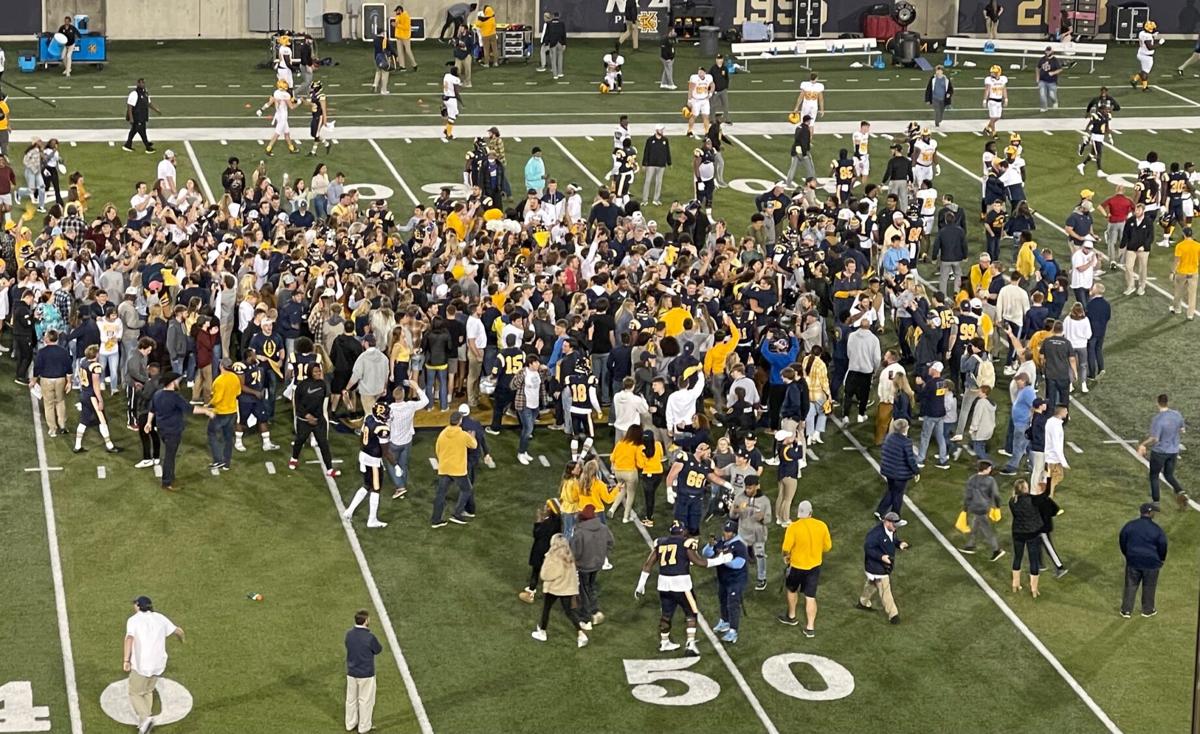 The student section stormed the field after the Bucs finished off their miraculous comeback. 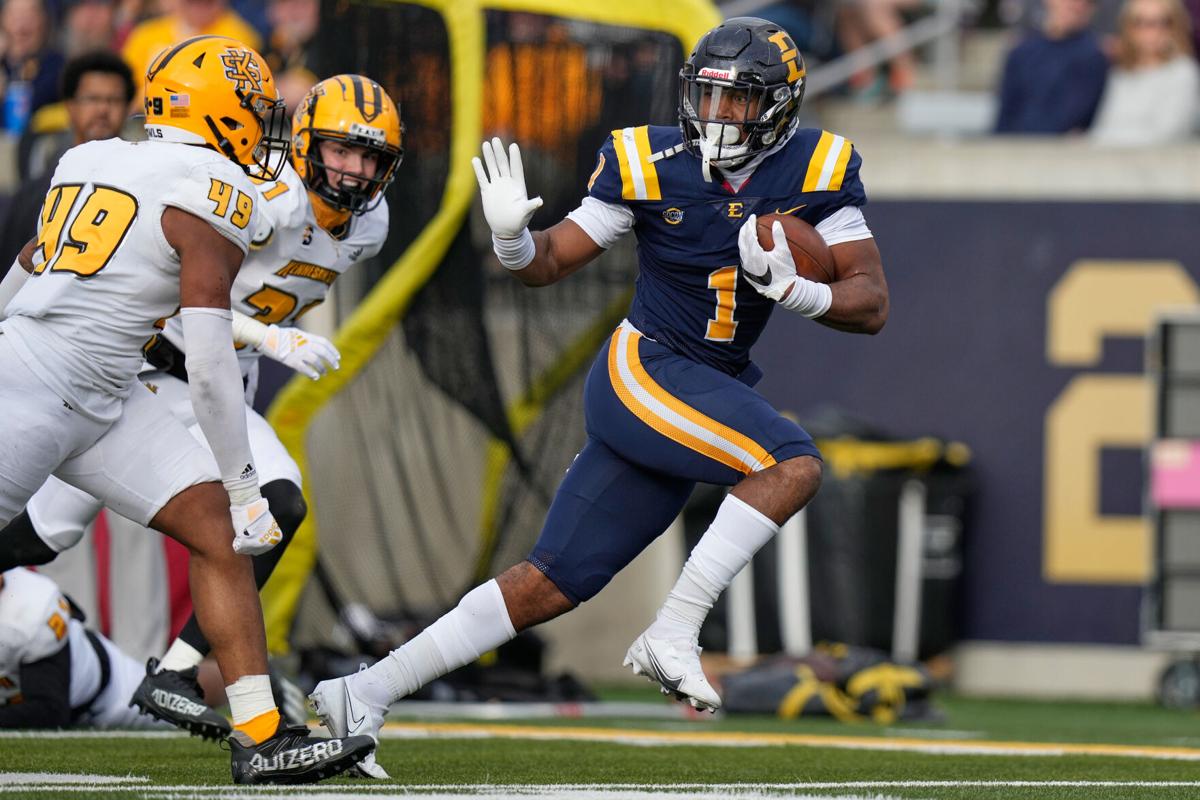 East Tennessee State running back Quay Holmes kicks up rubber pellets as he strains for more yardage on Saturday. 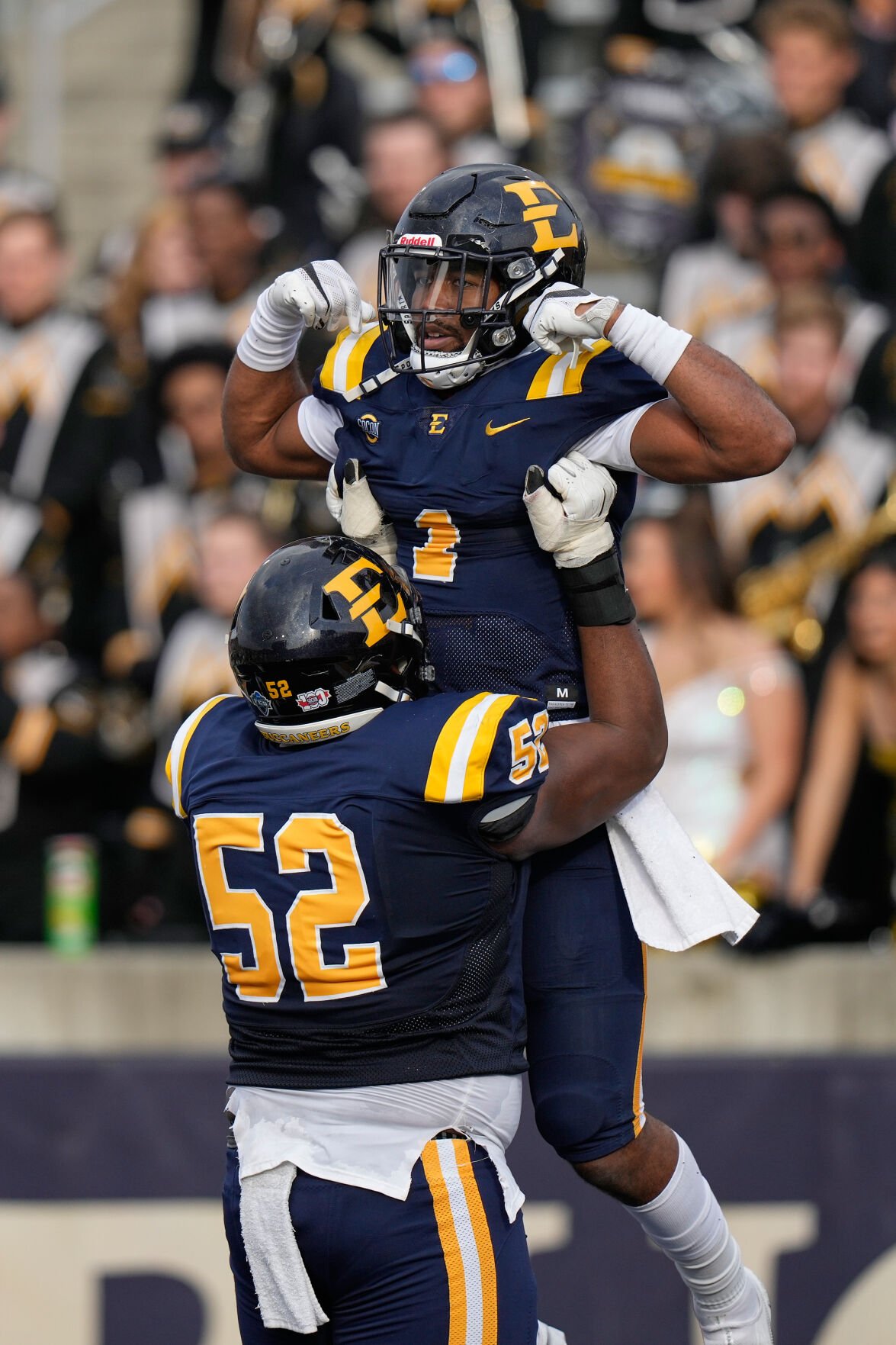 The student section stormed the field after the Bucs finished off their miraculous comeback.

East Tennessee State running back Quay Holmes kicks up rubber pellets as he strains for more yardage on Saturday.

East Tennessee State’s dream football season is still alive thanks to a miraculous ending, and Bucs coach Randy Sanders says he got a little help from above.

ETSU scored 15 points in the final 1:28 Saturday to beat Kennesaw State 32-31 in the second round of the Football Championship Subdivision playoffs, a game where so many unlikely events happened down the stretch that Hollywood would have rejected the script as unbelievable.

Needing so much to go its way over the final minute and a half that the odds seemed insurmountable, the Bucs got two touchdowns, an improbable onside kick and a two-point conversion and turned Greene Stadium into a frenzy of celebration.

“I lost my dad 10 years ago today,” Sanders said, choking back tears. “So there was a point when it was 31-17 I told him I needed a little help. There was no better football fan or fishing partner than my dad. For that to happen today makes it even more special.”

ETSU improved to 11-1 — it’s the first time in school history the team has won 11 games in a season — and will play at North Dakota State next weekend in the FCS quarterfinals. Kennesaw State finished 11-2 after having its 10-game winning streak end.

“That was a tough way to finish,” Kennesaw State coach Brian Bohannon said. “Credit to ETSU. Found a way to win the game. I hate for it to end this way. At the end of the day, we didn’t make enough plays to win the game. Unfortunately that’s playoff football.”

Kennesaw State had taken a 31-17 lead late in the game and seemed to be cruising toward the quarterfinals before the Bucs stormed back.

After a touchdown pass from Tyler Riddell to Will Huzzie cut Kennesaw State’s lead to 31-24 with 1:28 left, the Bucs attempted an onside kick. Freshman tight end Tim Stayskal made the unlikely recovery, giving ETSU the ball back and what appeared to be a chance to tie.

After tight end Nate Adkins made two tough catches, ETSU scored again on a pass to Quay Holmes with 35 seconds left to get within one.

Instead of kicking the extra point and settling for overtime, Sanders decided on an all-or-nothing two-point conversion. Riddell passed to Adkins in the back of the end zone to put the Bucs on top.

“Over the course of 33 years now, there have been a lot of special wins as a coach, but this one ranks in there,” Sanders said. “It definitely has to, not only just for the determination, the grit, the character, but because it means we get to go play again.”

When Holmes broke five tackles en route to a 31-yard touchdown run on ETSU’s first possession of the second half to put the Bucs up 17-7, the crowd of 8,453 started rocking. But the Bucs began to stall as Kennesaw State started to get its offense into gear.

The Owls scored touchdowns on three consecutive possessions as ETSU went backward. Three drives netted negative yardage for the Bucs as Kennesaw State pulled ahead 28-17. A field goal then made it 31-17 and the Bucs were in desperation mode.

“We felt like we had the game in somewhat control,” Bohannon said. “As I sit here right now, obviously we did not.”

Comebacks have become common for the Bucs, who have trailed in the fourth quarter in five of their 11 wins this season.

“It’s Buc football,” ETSU linebacker Jared Folks said. “That’s all we do. It seems like we like it that way and I guess we’re trying to keep Coach Sanders young.”