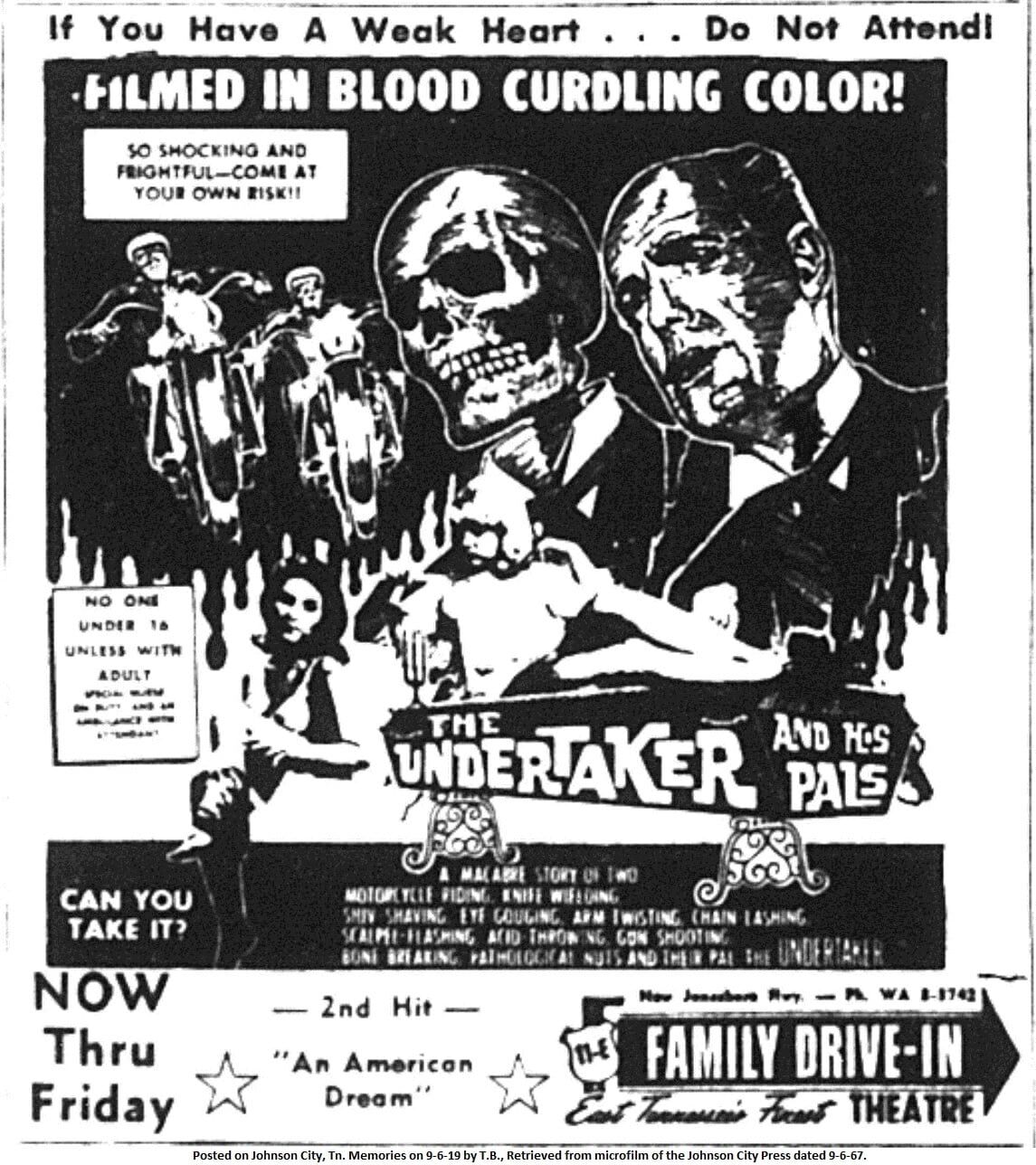 Sept. 6, 1967: "The Undertaker And His Pals" and "An American Dream" were showing at the Family Drive-In Theatre on the New Jonesboro Highway. 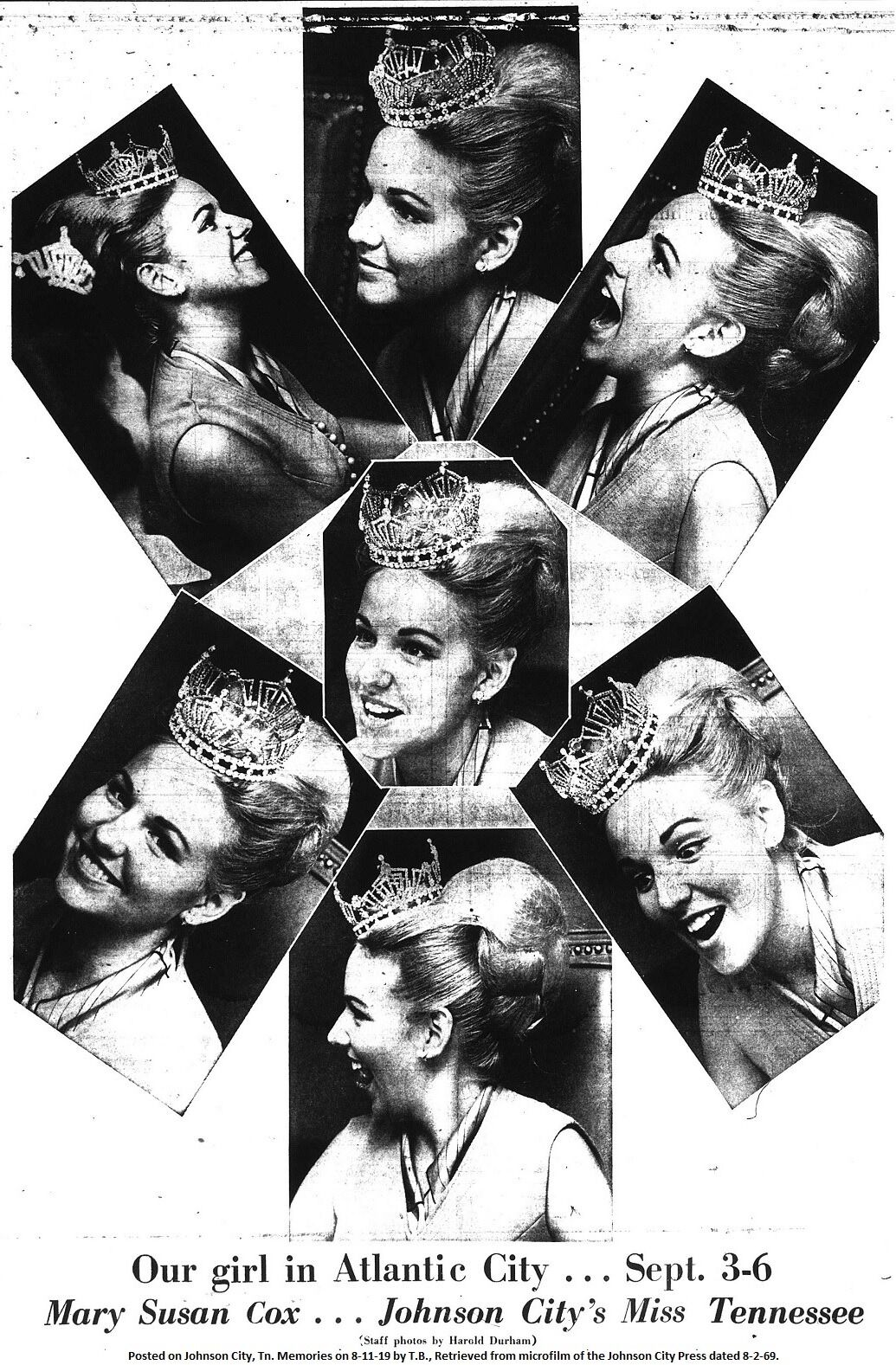 Sept. 6, 1783: This was the date of a church letter Samuel Tipton brought with him to the Sinking Creek Baptist Church.

Sept. 6, 1880: The Sun, a newspaper based in Baltimore, Maryland, reported, “A narrow-gauge railroad, thirty miles in length, is about to be built from the famous Cranberry ore mines, in Mitchell County, N.C., near the Tennessee line, to tap the East Tennessee, Virginia and Georgia road at Johnson City, a few miles above Jonesboro.”

Sept. 6, 1883: The Daily Chronicle, a newspaper in Knoxville, reported W.R. Rhea from Johnson City was staying at the New Lamar House.

Sept. 6, 1926: The Johnson City Staff News reported of a jailbreak in Sullivan County. “Fourteen prisoners escaped from the Blountville jail at eight o’clock last night and twelve of them were still at large early this morning.” The story continued, “Using safety razor blades the prisoners cut the bars in their cell on the third floor, escaped into the corridor, used the piece of bars they secured from the cage and dug a hole in the rear wall and slid to the ground on a rope made of blankets tied together.”

Sept. 6, 1944: Eugene Herman Street, motor machinist’s mate second class, died in a hospital on Guam of wounds received in action on Guadalcanal. His body was returned here in 1948.

Sept. 6, 1954: The Knoxville Journal, with a dateline of Johnson City, reported, “Johnson City Police today formally charged Joe Oliver, 38, of 110 Water Street, with the murder of his brother, Stanley Oliver, 30, early Saturday night.” The story continued, “Oliver, according to Police Chief C.W. Wilkinson, confessed beating his brother to death with a stove grate crank and a beer bottle when the two got into a fight over a bottle of shaving lotion the pair had been drinking.” More details revealed, “Oliver, who Chief Wilkinson said had a record of whisky possessions, will go before City Judge Horace D. Hyder at 7 a.m. Wednesday for preliminary hearing. The chief said Oliver was arrested Saturday night and is now being held without bond.”

Sept. 6, 1967: “The Undertaker And His Pals” and “An American Dream” were showing at the Family Drive-In Theatre on the New Jonesboro Highway. No one under 18 was allowed in unless accompanied by an adult.

Sept. 6, 1980: In an article by Henry Jenkins, the Press-Chronicle reported, “The 1980 edition of the East Tennessee State University Buccaneers will be unveiled tonight at Memorial Center as the Bucs launch their new season against the Wofford Terriers, an independent aggregation from Spartanburg, S.C. Kickoff will be at 7:30.”