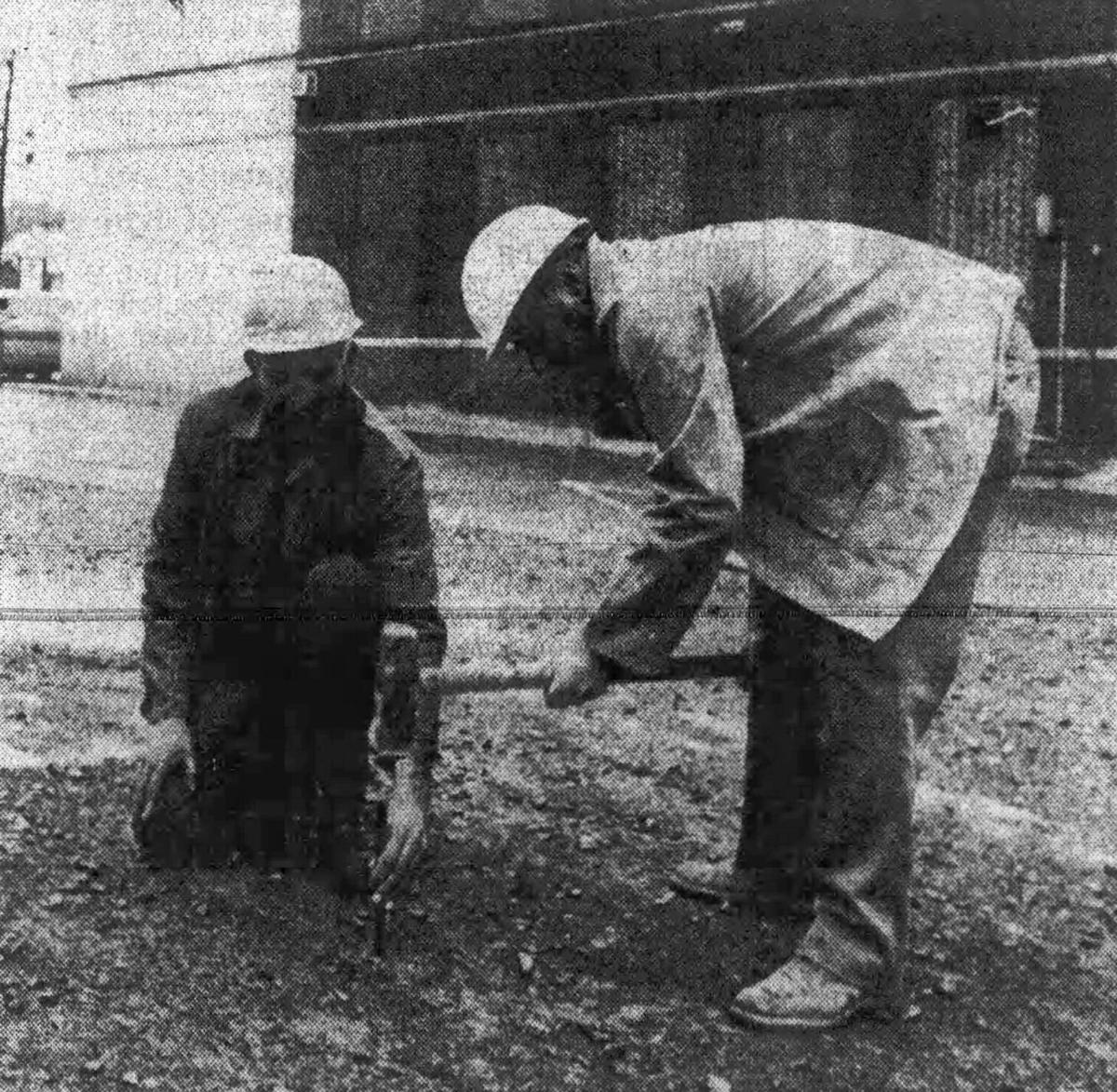 In a captioned photograph on the front page of the Sept. 21, 1971, Johnson City Press-Chronicle, readers learned that “The first stake driven to launch the expansion of the Johnson City Press-Chronicle was noted this morning as the newspaper moves to double its printing process. The 19,200-foot addition will occupy the site of the old city hall. Completion will take nearly two years. Shown here are members of the construction team of Burleson Construction Co.”

Sept. 21, 1892: According to The Comet, “Messers J.E. Platt and B.B. Arwood were in the city yesterday. They went out to Embreeville in the afternoon where they will have a new cross track put in at the furnace there, which will offer better facilities for hauling out iron from the furnace.”

Sept. 21, 1896: One hundred and twenty-five years ago on this date, with a dateline from Elizabethton, the Chattanooga Daily Times reported, “W.E. Carter, of this place, was married to Miss Ella Earheart (sic) near Bluff City last Wednesday evening.”

Readers also learned that “Hon. Sam W. Hawkins will speak at this place on Sept. 26.”

The Chattanooga Daily Times is now published as the Chattanooga Free Press. There was not a daily newspaper published in Johnson City in 1896. The Comet was a weekly publication.

Sept. 21, 1910: The Johnson City Comet reported, “Prof. McAllen, of the Bristol City Business College, was here yesterday to see about getting a class to study shorthand and take a business course. (If he) secures a class he will come here from Bristol and teach a night school three nights a week.”

Sept. 21, 1918: The Johnson City Daily Staff reported news of interest about several area residents. “Friends will argret (sic) to know that Mr. G.W. Rhodes is very ill and his life is despaired of.”

“Friends interested in the condition of Mr. Amzi Smith are informed that he and Mrs. Smith leave today for Philadelphia where he will undergo an examination to find if an operation will be necessary.”

“Mrs. A.P. Mathes, who has been confined to her home with illness, is improving.”

This item was from Jonesboro: “Quite a number of young people, chaperoned by Mrs. John Vines, enjoyed a motor truck ride to Elizabethton last Friday.”

Also from Jonesboro, readers learned, “Mrs. Thomas C. Smith and little son Thomas, Jr., have returned to Bristol after a lengthy visit with Jonesboro relatives, Thomas Jr., has been quite ill but improved greatly while here, friends of Mr. and Mrs. Smith will be glad to know.”

Camp Humphrey was located on the Potomac River in Fairfax County, Virginia..

Jonesboro was spelled that way in 1918.

Sept. 21, 1921: A century ago today, with a dateline from Johnson City, the Knoxville Sentinel reported news about the railroad. “The annual meetings of the East Tennessee and Western North Carolina Railroad Company, Linville River Railway Company and affiliated companies have just been held here. The visiting directors were Messrs. Frank P. Howe, Edgar P. Earle, Henry Lewis and Arlo Pardee, of Philadelphia. Two days were spent by the directors in inspecting the railroad lines and properties. A luncheon was tendered for the directors and officials at the Country club (sic).”

The Knoxville Sentinel is now published as the Knoxville News-Sentinel. We do not have access to any newspapers that were published in Johnson City in 1921.

Sept. 21, 1936: According to the Johnson City Press, “Mayor Marion Sell and members of the city board of commissioners will meet tonight for what is expected to be a routine adjourned session. City officials have said they know of nothing of an important nature scheduled to come before the group. The session will begin, as usual, at 7:30.”

Sept. 21, 1946: Seventy-five years ago today, the Johnson City Press-Chronicle reported, “A four-year-old boy, Paul Rader, son of Mr. and Mrs. Arnold Rader, city, route (sic) 3, was treated at Appalachian Hospital Thursday for wounds received when he fell on a cornstalk, attendants said. The child was given antitentanus treatment.”

Sept. 21, 1950: The Johnson City Press-Chronicle reported, “Forty to 50 Johnson City motorists received citations to city court yesterday to face a possible fine because they were driving without the 1950 city automobile sticker.”

“Police Sergeant P.E. Broyles said that over 40 citations were processed within one hour yesterday. He said that several motorists had failed to put their auto stickers on their cars even though they had bought them.”

“Midnight Monday was the deadline for city motorists to drive with the old 1949 sticker. The new stickers may be purchased at the recorder’s office at City Hall for $2.”

Sept. 21, 1956: According to the Johnson City Press-Chronicle, “Frank Bryant, Johnson City attorney, has been name campaign chairman of the Democratic party in Washington County.”

“The new campaign chairman said last night he hoped to have the official headquarters open by Oct. 1. He said it would probably be in the John Sevier Hotel.”

Sept. 21, 1971: Fifty years ago today, in a captioned photograph on the front page of the Johnson City Press-Chronicle, readers learned that “The first stake driven to launch the expansion of the Johnson City Press-Chronicle was noted this morning as the newspaper moves to double its printing process. The 19,200-foot addition will occupy the site of the old city hall. Completion will take nearly two years. Shown here are members of the construction team of Burleson Construction Co.”

Sept. 21, 1996: An article with the byline of Sam Watson in the Johnson City Press told of an unusual fundraiser. “What started out as a zany evening full of cheerleaders, bribery and ‘the Macarena’ ended Friday in a marathon spell-off that could only end in a tie.”

“By the time the East Tennessee State University Friends of Music’s ‘Corporate Spelling Bee’ was over at the Holiday Inn, two teams composed of ETSU students were even stumping the judges.”