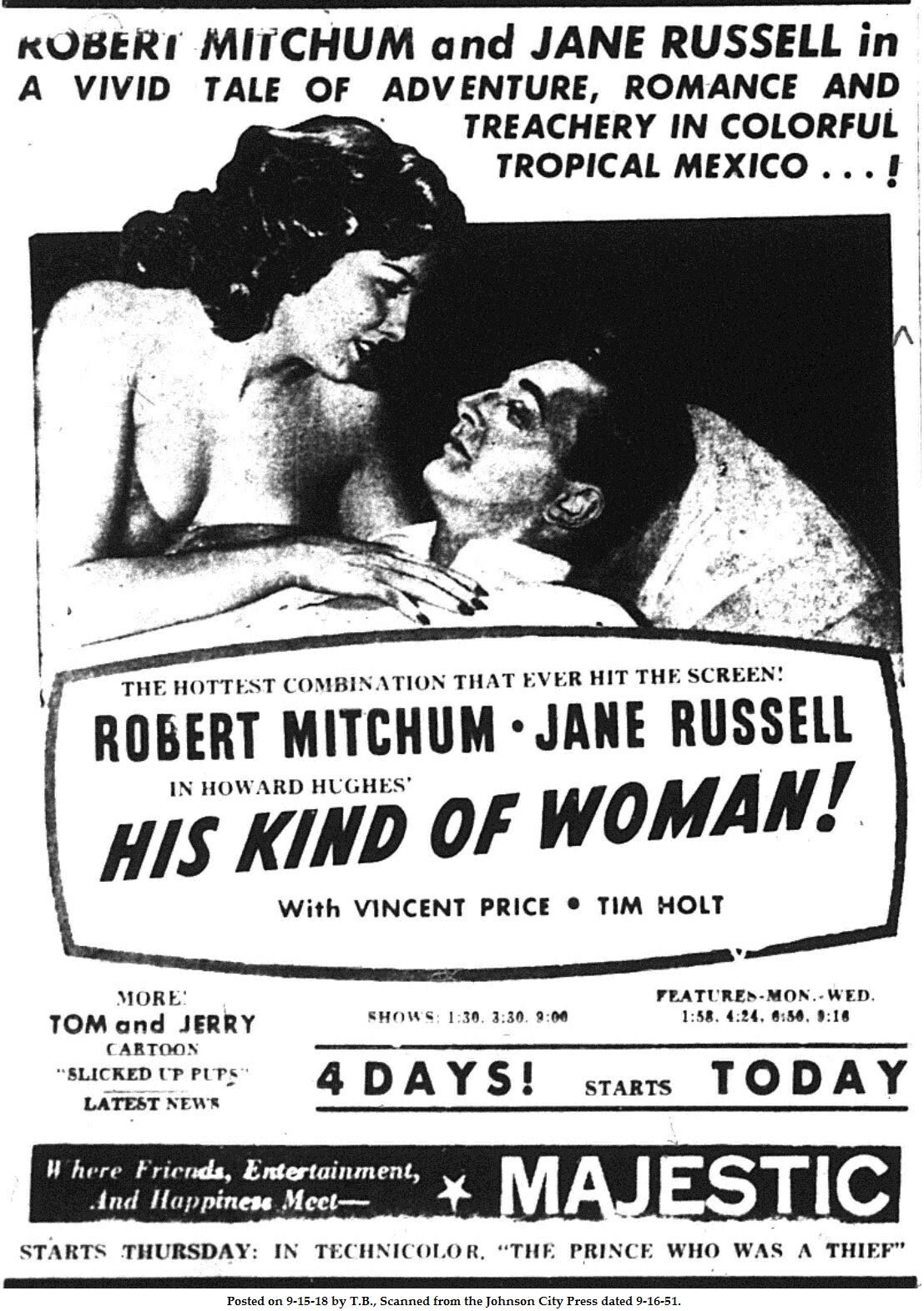 “His Kind of Woman” with Jane Russell and Robert Mitchum started at the Majestic Theatre on East Main Street in downtown Johnson City on this date in 1951.

Sept. 16, 1879: In an article with a dateline of Jonesborough, Tenn., readers of The Cincinnati Daily Star learned, ”While Charles O’Brien, mail carrier from Johnson City to Bakersville, N.C., was fooling with his pistol at a way office it went off, wounding him so that he died in a few minutes.”

Sept. 16, 1899: Joseph P. McCormick was born. Mr. McCormick was manager of the Johnson City Steam Laundry for several years; following that, he became assistant to the president of Milligan College. An active member of First Christian Church, Mr. McCormick “was one of the main workers in the establishment of the West Walnut Street (Christian) Church” and often preached there. McCormick worked at Milligan into his 90s.

Sept. 16, 1909: The “New Model Flour Mill” was under construction. “J.W. Ring, of this city, is at present actively engaged in the construction of one of the most important flouring mill plants that has ever been undertaken in the south,” The Comet reported. “The new mill is located at Johnson City, occupying a convenient position between the Southern and the C.C. & O railways.”

Sept. 16, 1929: The Johnson City Staff-News reported on a recent baseball game between the Johnson City and Elizabethton teams. “The Soldiers closed out their 1929 season here Sunday afternoon by taking a 14 to 4 verdict from the Glanzstoff nine. The Troopers had little difficulty in solving the delivery of Jones, starting left-hander, for a big lead in the five innings he toiled on the mound” and continued, “they hit Smith for enough runs to bring their totals to 14. Fourteen hits, seven walks and two hit batsmen were allowed the Soldiers by the Glanzstoff moundsmen. It was evident from the beginning that the Soldiers had their opponents outclassed.” The story continued, “Jim, Mooney, former Teachers College athlete, was on the mound for Soldiers and had things his way.”

Sept. 16, 1949: The Johnson City Press-Chronicle reported, “Chalk up another variety of duty of the fire department. Shortly after 9 a.m. yesterday Company No. 2 answered a call to Magnolia Avenue and Virginia Street to wash away blood and debris originating from a horse having been shot by police early Wednesday night, Chief L.L. Geisler said. Residents of the neighborhood said a horse which had fallen on the steep hill became badly injured and unable to arise and police were called to destroy the animal.”

Sept. 16, 1969: The Press-Chronicle reported, “Forty-two units are scheduled to take part in the Centennial United Fund Parade here Sept. 17.” The story continued, “At a Centennial Planning Committee meeting ... Lee Wallace said the parade units include … a 100-year-old buggy, antique cars, a pony wagon, five bands … ROTC drill teams and sponsor corps.” Finally, readers learned, “The committee also asked Johnson Citians for suggestions as to what should go into a time capsule to be placed with the historical marker on Dec. 1.” The United Fund is now known as the United Way.

Sept. 16, 1979: In a story by Linda Sanders in the Press-Chronicle, Mae Deakins recounted how it was to have lived 86 years in the home her father had built in the Dry Creek section of Washington County, near Lamar. “From riding to Johnson City in a horse-drawn buggy, an all-day trip, to a train ride, to a 15-minute auto drive, ‘I didn’t think I would live this long ... but I’m glad I did,’ ” Miss Deakins said.

Sept. 16, 1999: The Johnson City Press reported that the next day, Sept. 17, would be National POW/MIA Recognition Day at the Veterans Affairs Medical Center, Mountain Home. There would be a ceremony at the gazebo. “Dave Purner, ex-prisoner of war, will be the speaker and a Unicoi County Middle School student will present the winning essay titled, “Our Flag: Is it Worth Protecting?”

Sept. 16, 2009: The Johnson City Press reported that Sheriff Kent Harris of Unicoi County had recently warned the public about potential scam artists who were paving and sealing driveways with cheap materials. While the driveways look good initially, they deteriorate in just a few months, according to Sheriff Harris.