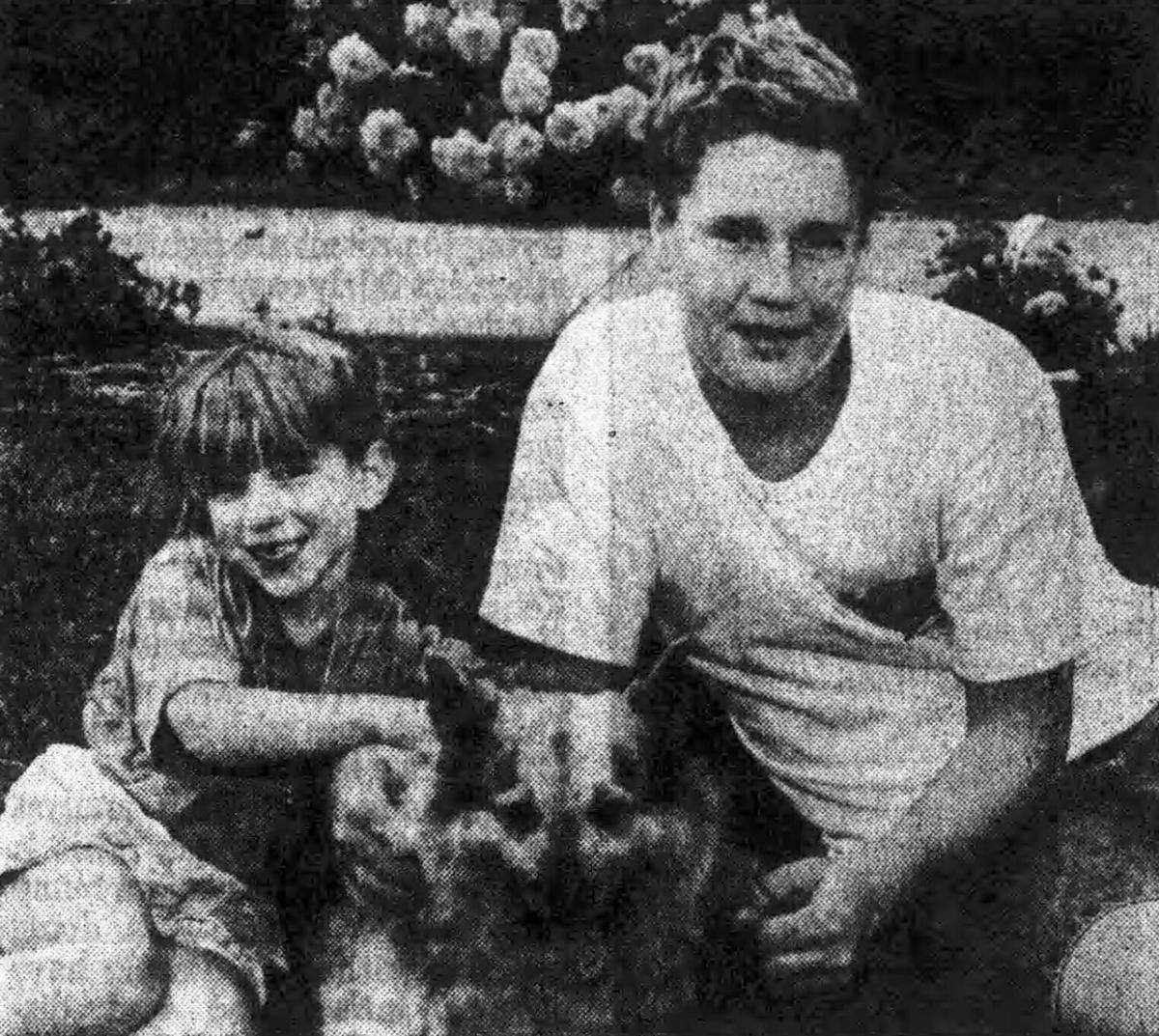 Courtney and Justin Mohler with skunk-sniffing dog Cookie, who alerted residents in the Towne Acres community to a rabid skunk found dead, according to a news article in the Sept. 11, 1996, edition of the Johnson City Press.

Sept. 11, 1896: One hundred and twenty-five years ago today, The Chattanooga Daily Times reported a story with a dateline from Johnson City and a date from Sept. 10. The story provided slightly different details than a news account about the same incident from Sept. 10, 1896. “A 5-year-old child of James Clark died of diphtheria yesterday, and two other children of the same family have the same disease. The house is quarantined against contagion.”

Sept. 11, 1918: The Johnson City Daily Staff reported news with a dateline from Spartanburg, S.C. “An order issued at Camp Wadsworth last night quarantined the Camp against the city of Spartanburg because of the presence in the city of diphtheria. Hereafter no officer or enlisted man will be allowed to visit the city unless he can exhibit a pass showing that he is on official business. It is expected that the quarantine will remain in force about three weeks although no official statement to that effect has been issued. Health authorities in Spartanburg have already closed all schools, churches, theaters and amusement places and every effort is being made to stamp out the disease, about sixty case of which have thus far been reported.”

Camp Wadsworth was a training camp during World War I. Many men from the Upper East Tennessee, Southwestern Virginia and Western North Carolina area were sent there.

Diphtheria can easily be prevented now by means of a vaccination.

Sept. 11, 1921: One hundred years ago today, the Nashville Banner quoted the Chattanooga Times, which ran an editorial originally appearing in the Johnson City Staff. “The Johnson City Staff the other day had a striking editorial on ‘The Soul of a City;’ it might be useful if the people of this community would only take that theme in its relation to the unfortunate dependents of all sorts in our midst, study it carefully and apply it according to the dictates of a sound and health conscience.”

Sept. 11, 1946: The Johnson City Press-Chronicle brought sad news to readers 75 years ago today. “N. B. ‘Pole’ Taylor, 76, prominent farmer of the Nolichucky River area and nephew of the late Bob and Alfred A. Taylor of Happy Valley, died of a broken neck received in a fall at his home about 2 o’clock yesterday afternoon.”

“According to members of the family, Taylor was working around his barn when the accident occurred. Death was instantaneous.”

“Taylor was well known over East Tennessee, having been a traveling salesman for several years. His father was James P. Taylor, brother of Bob and Alf.”

“He had resided on the farm, near Limestone, which he owned for 55 years, and was active in politics and civic affairs in his younger days.”

Sept. 11, 1971: Fifty years ago today the Johnson City Press-Chronicle informed readers about football at ETSU. “The East Tennessee State Buccaneers, who have built one of the nation’s finest winning traditions over the past three years, began a brand new campaign tonight at University Stadium against a fired-up band of Eagles from Carson-Newman College.”

“The Buccaneers, who have lost only once in the past 25 games, begin what they hope will be another successful season at 7:30 p.m. against a team which holds a sizeable advantage in a series which goes all the way back to 1920.”

“Coach John Robert Bell’s charges will be renewing a series which has a long and honorable history. They will be facing a school which launched East Tennessee State into the classical seas of intercollegiate competition.”

“East Tennessee State and Carson-Newman first met on the gridiron 51 years ago. The Eagles were the first competition the Bucs ever faced and the Johnson City 11 limped away the victims of a 55-1 shellacking.”

Sept. 11, 1996: Twenty-five years ago today, readers of the Johnson City Press were warned of the dangers of rabies in an article with the byline of Kristen Hebestreet. “A rabid skunk found in north Johnson City has prompted Washington County/Johnson City Director of Animal Control Debbie Dobbs to remind pet owners to vaccinate dogs and cats.”

“The skunk was found in Towne Acres subdivision Friday. The state Department of Health’s Division of Laboratory Services tested the animal and confirmed the skunk was rabid.”

“Carol Mohler, 706 Douglas Drive, knew there was a skunk somewhere in the neighborhood after the family dog was sprayed. The overpowering odor was certainly enough of a clue, but the 9-year-old border collie mix knew where to find the now-dead skunk.”

“’She kept walking over to the drainpipe as if to tell me (the skunk) was there and I didn’t pay any attention to her,’ Mrs. Mohler said.”

“While it’s possible Cookie killed the skunk in defense of her family, Mrs. Mohler says she can’t be certain of that since she didn’t see that happen.”

“Although Cookie was current on her rabies shots the veterinarian gave the dog a booster and recommended the family bathe her in tomato juice and a douche to kill the skunk odor.”

“’We call her our ‘Volunteer dog’ because she was a good color of orange by the time I’d finished with her,’ Mrs. Moher said.”

Rabies in household pets and livestock can easily be prevented by means of a vaccine readily available at all veterinarian offices.

Sept. 11, 2011: Johnson Citians could not believe what they were seeing and hearing on the radio and television, as they learned that airplanes had hit the World Trade Towers in New York City, the Pentagon and one had crashed into a field in Pennsylvania. (Personal recollection.)