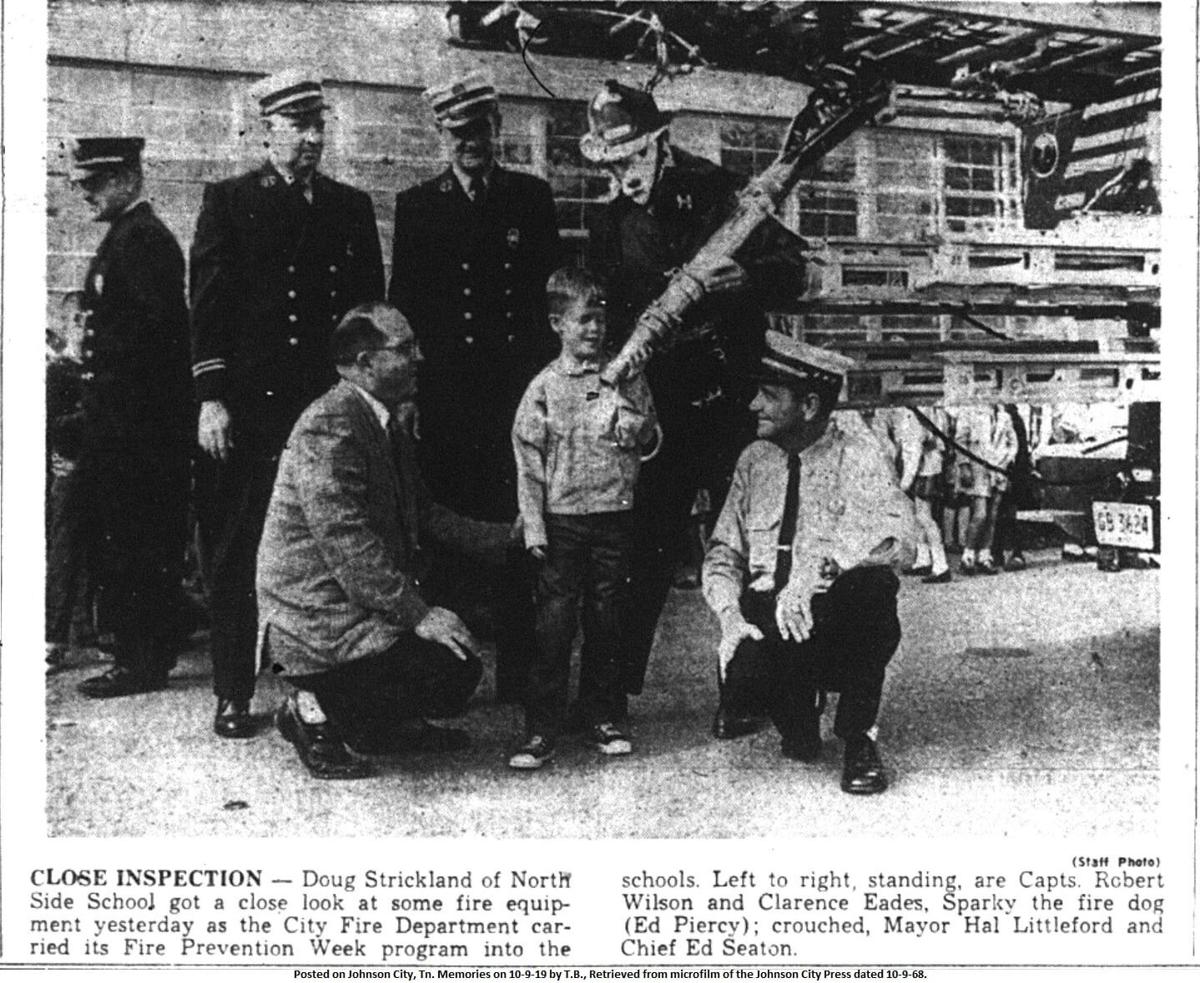 Oct. 9, 1968: Doug Strickland of North Side School was pictured in the Press-Chronicle as he took a close look at some fire equipment as the City Fire Department carried its Fire Prevention Week into the schools. Also pictured were Captains Robert Wilson and Clarence Eades, Sparky the fire dog (Ed Piercy), Mayor Hal Littleford and Chief Ed Seaton.

Oct. 9, 1867: Henry Johnson sold to his son, John M. Johnson, and E.D. Hoss the brick building known as Johnson’s Depot for $1,400, along with the right of way for wagon access to the back of the building.

Oct. 9, 1884: The Comet reported on new building activity in Johnson City. “Mr. G.C. Harris’ elegant residents will be completed in about a week. It is situated on the corner of Spring and Walnut street. When finished it will be one of the tidiest houses in the city.” Additionally, readers learned, “Mr. Christian’s house will be ready to be occupied in November. It is a two story brick dwelling with eight large rooms and three small ones. It is situated between Church and Railroad streets. It covers 1,401 (square feet) of ground.”

Oct. 9, 1890: The Comet reported, “There is a new store on Market street in the Hale block. It was opened this week and the proprietors, Ward & Friberg, will be glad to have you call and examine their goods. They carry a full line of drugs and make a specialty of prescriptions. Mr. F.M. Ward, the senior member of the firm has charge of the compounding and has had ten years experience in that department.”

Oct. 9, 1901: The Knoxville Sentinel ran an ad for the Hotel Greenwood in Johnson City. “Service first-class. Transient. $1.00 per day. Hot and cold baths free for daily boarders. Sample rooms.” The Greenwood sat adjacent to the railroad tracks between West Main and West Market Streets, the present site of a city parking lot.

Oct. 9, 1929: The Sun, a newspaper in Baltimore, reported, “Phil Willard, of Johnson City, Tenn., playing his third year at guard for V.M.I., has never had time taken out for him in a game.”

Oct. 9, 1952: The Press-Chronicle reported, “Junior High School faculty entertained with a dinner party Tuesday evening at Lake Shore Grill, Watauga Lake, in honor of two teachers who are new to the staff this term. Toastmaster was Kermit Hodges, and the new teachers are Paul Slonaker of Johnson City and Vance W. Cheek of Weaverville, N.C.”

Oct. 9, 1968: Doug Strickland of North Side School was pictured in the Press-Chronicle as he took a close look at some fire equipment as the City Fire Department carried its Fire Prevention Week into the schools. Also pictured were Captains Robert Wilson and Clarence Eades, Sparky the fire dog (Ed Piercy), Mayor Hal Littleford and Chief Ed Seaton.

Oct. 9, 1971: The Idaho Free Press, a newspaper based in Nampa, Idaho, and with a dateline of Knoxville, reported, “A plane carrying Mrs. Ethel Kennedy was delayed about 50 minutes Friday night because of a false bomb threat. The FBI arrested Trenton Clark Teis, 18, of Johnson City, Tenn., after a woman selling flight insurance reported Teis had told her that he had put a bomb on the plane. The plane was searched, and then continued on its way after no bomb was found.”

Oct. 9, 1980: The Press-Chronicle reported that President Jimmy Carter was expected to arrive at the airport on Air Force One at 9:30 that morning. He was scheduled to leave around 11:20 a.m.

Oct. 9, 1984: The Press-Chronicle reported, “Confessed killer Charles Butler Poe waived his right to a hearing Monday and was sentenced to 35 years in the state penitentiary.” The story went on to remind readers that “Poe, 48, Gray, was charged with the first-degree murder of his former wife, Roberta Poe, 38. He confessed last Oct. to killing Mrs. Poe at her Gray home on Sept. 23, 1983.”