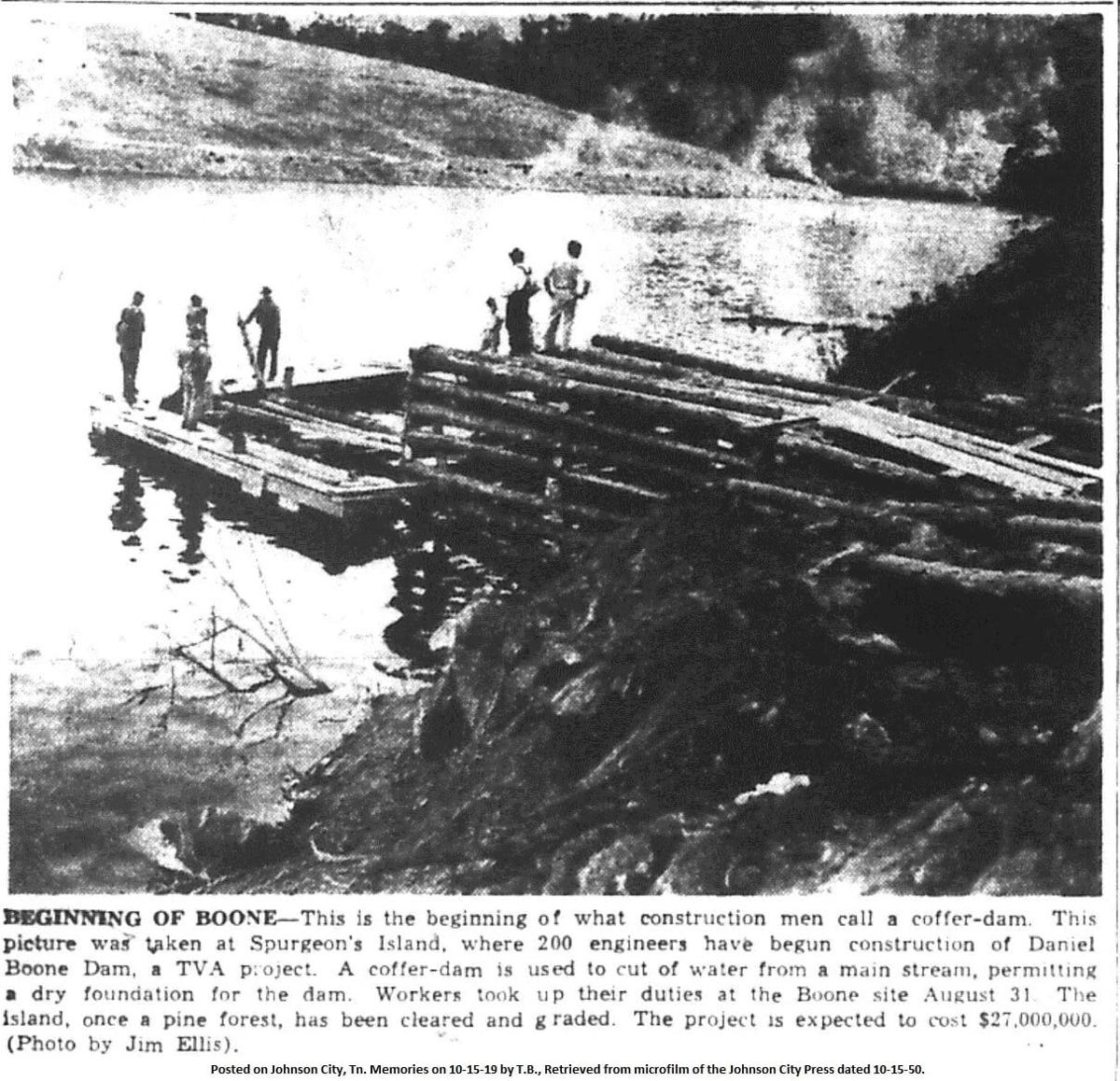 On Oct. 15, 1950, the Johnson City Press-Chronicle published a photo of TVA construction of a coffer dam on Surgeon Island on the Holston River for what would become Boone Dam. The coffer dam was used to cut water off from a main stream, permitting a dry area for the dam’s foundation.

Oct. 15, 1874: The Herald and Tribune in Jonesboro reported,“Mr. George H. Scott, of Johnson City, accidentally shot himself one day last week while out in the Limestone Cove, gathering Chestnuts. Having set his gun carefully aside he cut a tree that fell on (indecipherable) near it, which caused it to go off, the shell passing through his wrist and inflicting a severe and painful wound.”

Oct. 15, 1906: Tom Moody was killed instantly in a tragic accident. On that day, a horse and wagon Mr. Moody was controlling bolted in front of a streetcar that was being ran by a Mr. Mallicoat. The car struck the wagon, which killed Mr. Moody instantly. In addition, a boy in the wagon was seriously injured.

Oct. 15, 1921: The Oklahoma Leader, a newspaper based in Oklahoma City, reported on the Philadelphia Americans, a baseball team, that had recently drafted “Pitcher Page of Fort Worth, Texas and Pitcher Weaver of Johnson City, Tenn.”

Oct. 15, 1929: The Johnson City Chronicle reported, “Glen Keplinger of Garbers was admitted at the Appalachian Hospital Sunday night about 6:30 o’clock after the automobile in which he was riding wrecked on the Cherokee Road a short distance from Johnson City.” The article continued to say, “A Mr. Treadway was cut and bruised but returned to his home after receiving treatment.” The article concluded in saying, “It is understood the machine in which the two men were riding overturned into a ditch after leaving the highway.”

Oct. 15, 1938: The Indianapolis Star reported that Mrs. H.C. Black of Johnson City had recently been renamed as a trustee for the Women’s Home Missionary Society of the Methodist Episcopal Church.

Oct. 15, 1950: The Johnson City Press-Chronicle published a photo of TVA construction of a coffer dam on Surgeon Island on the Holston River for what would become Boone Dam. The coffer dam was used to cut water off from a main stream, permitting a dry area for the dam’s foundation.

Oct. 15, 1957: The Press-Chronicle reported, “A pleasant, white-haired lady may not be known to Johnson City shoppers by name, but many have been greeted by her as she operates the elevator at Penney’s, Inc.” The article continued, “Mrs. Hester Grigonies, No. 3, Goss Apartments, is in satisfactory condition at Memorial Hospital after she fell Saturday night, breaking her arm and injuring her head.” The article continued to say that she had recently moved to the apartments. “Mrs. Pearl Goss was to be away over the weekend, and (Mrs. Grigonies) had promised to feed her kittens ... (Mrs. Grigonies) went to the basement Saturday night for that purpose, and slipped in the dark, falling on the concrete floor … (she) remained in the basement until Sunday afternoon, when she managed to crawl up the stairs and summon an ambulance.”

Oct. 15, 1985: In his column in the Johnson City Press, Tom Hodge mentioned, “Today is National Grouch Day.” He suggested sending the neighborhood grouch a bouquet of poison ivy.