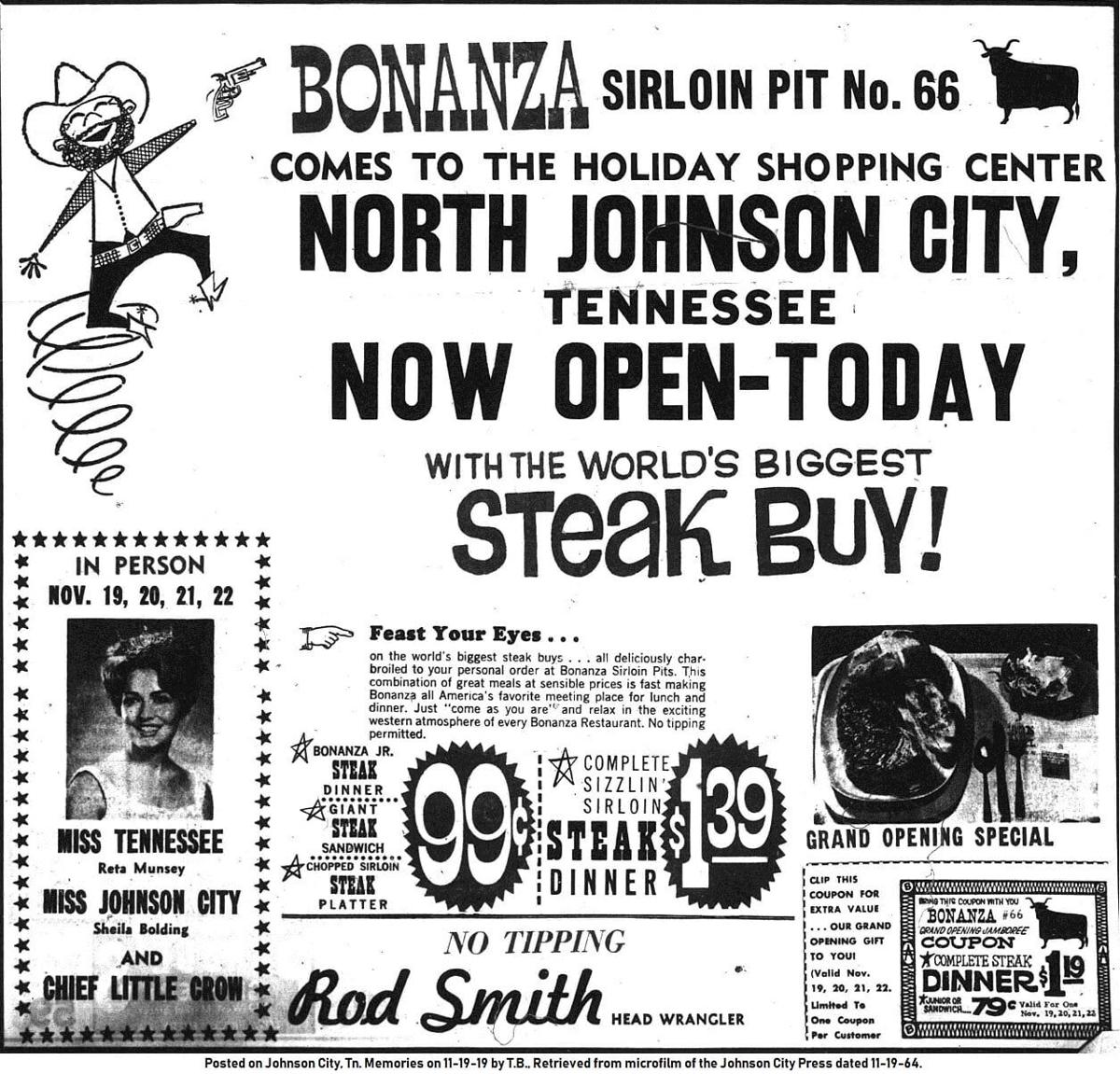 November 19, 1964: Ad for the grand opening of Bonanza Sirloin Pit in Johnson City.

Nov. 19, 1903: The Comet opined, “Alderman Wofford has voluntarily declined remuneration after twelve years of active and painstaking service as alderman. While The Comet differs with him politically we have frequently found pleasure in endorsing his position upon measures for the public good. He retires from active political life and the good will of his fellow citizens.”

Nov. 19, 1914: The Johnson City Staff reported on a recent luncheon given by Mrs. Thad Cox. “A charming affair of beautiful arrangements was the elaborate luncheon given on Wednesday for the members of the Merry Wives and a few invited guests by Mrs. Thad Cox at her home on Watauga avenue.” The story went on to speak of the menu, “consisting of grape fruit, quail on toast, mangoes, hot rolls, escalloped oysters, lemon ice, pineapple and asparagus salad on lettuce, cheese balls, wafers, mincemeat wafers with whipped cream, coffee and nuts.”

Nov. 19, 1926: The Nashville Banner, with a dateline of Johnson City, reported a horrific story. “John Baltis, 61, near here, fell against a buzz saw last night. His body was sawed almost completely in half but he was able to stager a half dozen steps before falling dead.”

Nov. 19, 1949: The Johnson City Press-Chronicle reported, “Companies 2, 3 and 4 answered an alarm shortly before 8 p.m. yesterday when an electric motor caught fire over Masengill’s Store on East Main street in Johnson City’s business district, Assistant Fire Chief George W. Wilson said. Damage was estimated at $25.” That would be about $273 today.

Nov. 19, 1962: The Press-Chronicle reported that Dana Ruth Frost had been selected as the “Teen of the Week,” the first person selected in that program. “The Boones Creek High School junior is the first to be honored in the Optimist Club’s new ‘Teen of the Week’ program.” Dana Ruth resided with her parents, Mr. and Mrs. Dana Frost at Route 11, Kingsport. Route 11 was located in the Woodland Heights community.

Nov. 19, 1969: The Press-Chronicle showed giant Christmas cards that would be sent to members of the military. “Jim Lowe, Jim Holt and Hark O’Reilly check the king-sized Christmas greetings which will be sent to the four branches of service for the GIs in Vietnam. The giant Christmas cards will bear the signature of over 2,500 students and others bearing the good wishes of East Tennessee State University. The project is sponsored by Alpha Phi Omega.”

Nov. 19, 1996: The Tennessee Board of Regents selected Dr. Paul Stanton as East Tennessee State University’s next president. Stanton had been the university’s vice president for health affairs and dean of the Quillen College of Medicine.