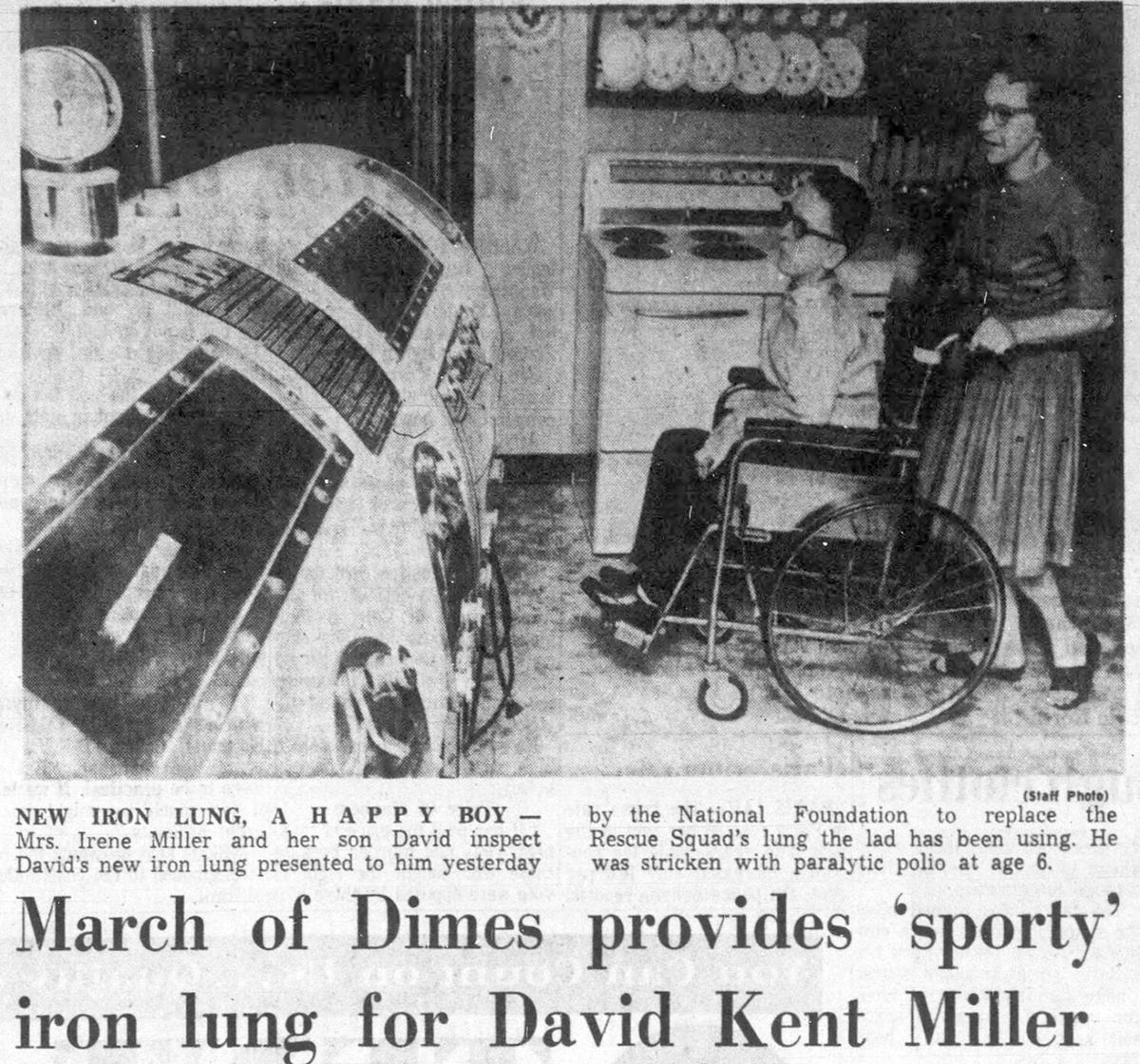 March 24, 1965: Johnson City Press-Chronicle readers learned of a polio patient receiving a new iron lung. “Mrs. Irene Miller and her son David, inspect David’s new iron lung presented to him this morning by the National Foundation to replace the Rescue Squad’s lung the lad has been using.”

March 24, 1887: Readers of The Comet learned of a sad death in Carter County. “Just as we go to press we learn from Mr. J.M. Williams, of Carter Co., that he found a man lying dead in the woods just back of his place yesterday afternoon. The unfortunate man appeared to be about 65 years of age, had long gray hair and beard, was clothed in blue jeans and had on new shoes. He was an entire stranger in the neighborhood and nothing was found on his person by which he could be identified. Coroner Anderson held an inquest over the body and the verdict was that the deceased died from exposure and starvation. He was buried in the Williams graveyard today.”

March 24, 1892: Voter irregularities were apparently an issue well over a century ago. The Comet opined, “Johnson City will never have pure elections so long as non-residents are allowed to vote here on the property qualifications.”

Another opinion rendered by The Comet is as follows: “The agreement made between the Democrats and Republicans to stop illegal voting was all right in theory, but it failed in practice.”

March 24, 1909: With a Johnson City dateline, The Bristol Evening News reported, “Several meetings have been held by some of the progressive citizens of town in the interest of a fair to be held in Johnson City this coming fall. Captain W.A. Dickinson is chairman, and S.C. Williams, J. Fred Johnson, James A. Summers and S.R. Taylor constitute the committee to bring the matter before the people.”

Johnson City did not have a daily newspaper in 1909. The Comet was weekly newspaper.

March 24, 1917: Reporting with a dateline from Johnson City, the Nashville Banner informed readers, “Evan Rees of Springfield, Ky., spent a few days here this week in the interest of the proposition of build a tobacco warehouse in Johnson City, and to stimulate the movement in this county to have the farmers raise a large amount of Burley tobacco this year. It appears that Mr. Rees’ efforts are not in vain and it is now believed that between 1,500 and 2,000 acres will be planted in tobacco in Washington county (sic) this season and that there will be considerable additional acreage in Unicoi, Sullivan and Carter counties (sic) and in Southwest Virginia that will naturally come to Johnson City. The farmers will raise $20,000 with which to build and operate the warehouse. It is estimated that over a million and a half pounds of tobacco will be sold on the local market next fall.”

March 24, 1918: The Johnson City Daily Staff reported, “Gen. J. B. Cox left Friday for Knoxville, where he delivered an address on behalf of Twin Savings Stamps Sunday evening. Gen. Cox addresses an audience at Copper Hill under the auspices of the Red Cross there.”

March 24, 1927: The Knoxville News-Sentinel reported news regarding the death of a prominent Johnson Citian. With a dateline from Johnson City, readers learned, “R.N. Dosser, 84, senior partner of Dosser Brothers Department store (sic) here, died in Tampa, Fla., where he had been suffering from pneumonia, following an automobile accident. Heart failure was the direct care of his death.”

March 24, 1930: Readers of The Kingsport Times learned tragic news. Writing from a dateline of Johnson City, it was learned, “The body of Fred Hartgrove, 3, son of Mr. and Mrs. J.H. Hartgrove, was found in Brush creek (sic) shortly before last midnight after the creek had been dragged for more than five hours. The child last was seen playing near the bank of the stream.”

There was only one newspaper published in Johnson City in March of 1930; it was published on March 31.

March 24, 1947: The classified advertisements of the Johnson City Press-Chronicle contained an item it would be difficult to misplace. “Lost: New Rest Mattress off of truck between Johnson City and Boone’s (sic) Creek High School. Phone 442 between 8 and 6 for reward.”

March 24, 1953: On the editorial page, in the “So They Say” column the Johnson City Press-Chronicle reported, “Sure, he’s dependent. He’s depending on me to keep his grave decorated.” Thus said a “New York taxpayer, listing dead uncle as a dependent on income tax return.”

March 24, 1965: In a captioned photograph on the front page of the Johnson City Press-Chronicle, readers learned of a polio patient receiving a new iron lung. “Mrs. Irene Miller and her son David, inspect David’s new iron lung presented to him this morning by the National Foundation to replace the Rescue Squad’s lung the lad has been using. He was stricken with paralytic polio at age 6.”

Because of the polio vaccine, polio has practically been eradicated worldwide.

Details continued, “Captain George Adams reported that police entered the apartment at 222 ½ East Unaka Ave. at approximately 7 p.m. and discovered the bodies of Seaf Campbell, 59, and Mrs. Grace Pearl Allen, 49, in the bathroom.”

Readers further learned, “According to the County Coroner’s office, the two had been dead for two or three days.”

“Both Campbell and Mrs. Allen, a divorcee, died from wounds to the right side of the head, inflicted by a .25 caliber automatic pistol found next to Mrs. Allen’s body.”

Mar. 24, 1987: Tom Hodge wrote about typographical errors in his column in the Johnson City Press. “In our business, we call them ‘typos.’”

“Well, no matter what you call them, publishers, editors and writers deplore them.”

“A typo, by simple definition, is a sneaky grammatical glitches and misspellings that creep into books, newspapers and magazines.”