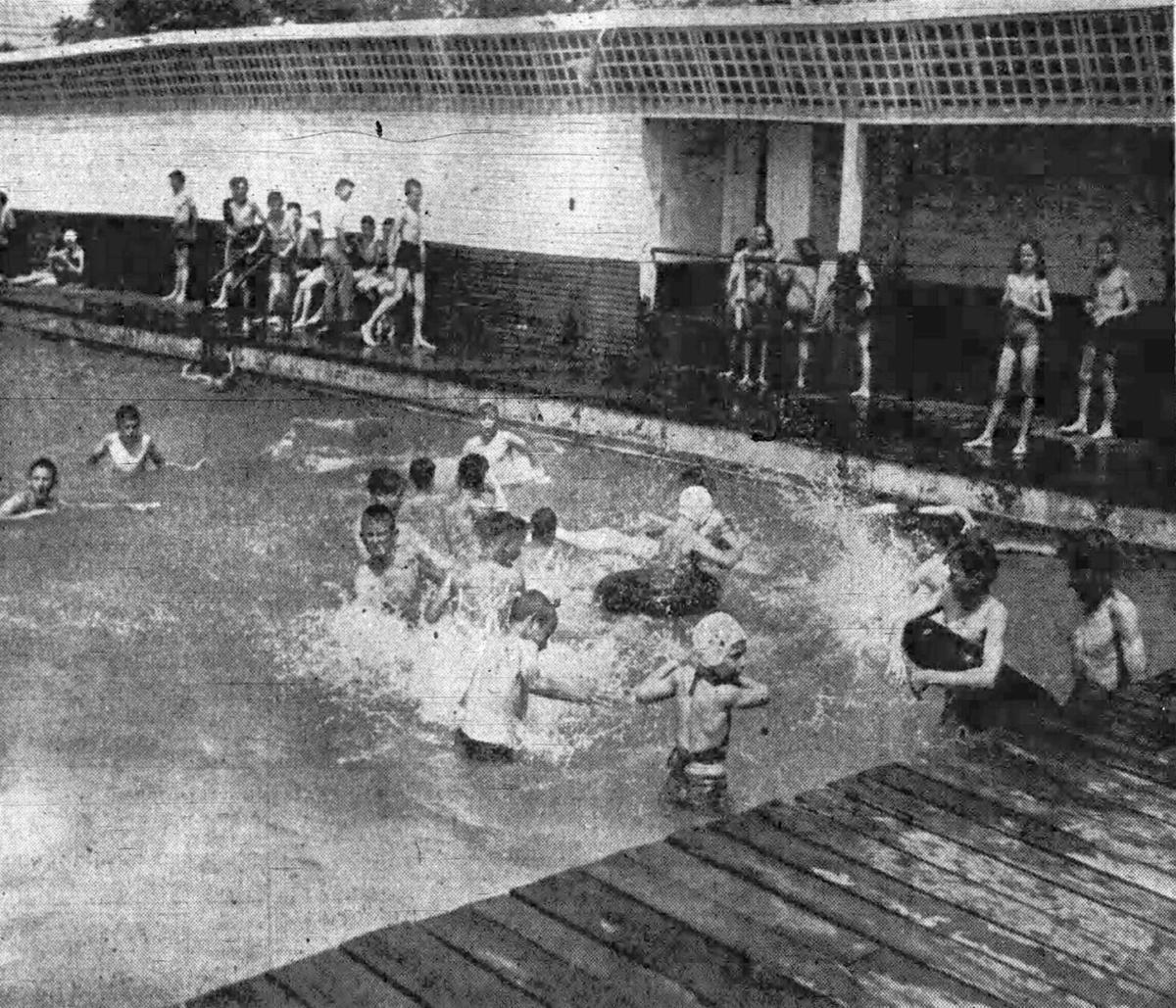 Readers of the June 8, 1947, edition of the Johnson City Press-Chronicle read, “The weather’s hot and the water’s fine. So come on in, kids, the Municipal Swimming Pool is in full swing. And if you get a dunkin’ occasionally, that’s all in the game. An all-out ‘water fight’ was in progress when this picture was taken. All in fun, of course.”

June 8, 1892: The Comet reported, “Nine hundred and seventy-eight tons of pig iron manufactured last week at the Embreville furnace. The yard is being covered with stacks of the useful metal, and shipments are made daily to Eastern and Western iron markets.”

June 8, 1899: The Comet provided this quip for its readers: “The Comet is unavoidly (sic) delayed this week on account of a collection. We accepted payment for an advertisement in Squaw Vine Wine, and the printers have been drunk ever since, and all dividing their time between The Comet and the calaboose. We are now ‘tapering off’ the force on gnat oil, and hope to have it in condition for next week.”

A calaboose is a prison.

June 8, 1910: News about the health of local residents awaited readers of The Comet. “Frank Gilmer, who has been seriously ill for several weeks, at the home of his uncle, J.W. Crumley, has improved sufficiently to be able to walk about the house.”

“Miss Eliza Wood is at the bedside of her sister, Mrs. Jno. R. Herndon, of Cleveland, Tenn., who was typhoid. Mrs. Herndon’s sickness is especially to be regretted, as Mr. Herndon is now in Edinburg, Scotland, attending the great missionary conference.”

Typhoid is caused by eating or drinking contaminated food or water, and is rarely seen now in the United States. It is partially preventable by a vaccine.

June 8, 1918: The Johnson City Daily Staff alerted readers, “Miss Senah Tate, who for the past eighteen months has been in training in Stuart McGuires (sic) hospital in Richmond, leaves the middle of June for Washington where she will enter an army hospital to complete her course before entering the service of Uncle Sam.”

June 8, 1921: Exactly one hundred years ago today, The Owensboro Messenger reported news of a horrific murder. With a dateline of Bristol, Va., readers learned that “Ewen Quillin, aged nineteen years, is being held in the Erwin, Tenn., jail tonight in connection with the murder of an eleven-year old girl whose body, half nude, was found this morning in the baseball park at Kingsport, Tenn. Quillin was captured near Kingsport this afternoon when bloodhounds followed a trail from the ball park to his home. He was taken to Johnson City, but fear of mob violence led to his removal to the jail in Erwin.”

The Owensboro Messenger was a newspaper published in Owensboro, Kentucky. It is now known as The Messenger-Inquirer. If there were any newspapers published in Johnson City in 1921, we do not have record of it.

June 8, 1931: The Elizabethton Star reported, “The Watauga Ladies Baseball team was to have played a double header last Sunday afternoon. They were to play Johnson City and Bluff City but only played eight innings when it began to rain. The score was five and three in favor of Watauga.”

The Elizabethton Star is still in publication.

The Southern Star was a newspaper published in Ozark, Alabama. It is not currently in publication.

June 8, 1958: In a column called, “Manners Make Friends,” Johnson City Press-Chronicle readers were reminded, “If a friend gets a promotion, wins an award, is elected to an office or receives any other kind of honor or advancement, be sure to drop him a note of congratulations. Such thoughtful little gestures are always appreciated.” Good manners never go out of fashion!

June 8, 1968: The Johnson City Press-Chronicle carried a chuckle, but with a large grain of truth contained within it. “Some people are so prejudiced that they won’t even listen to both sides of a phonograph record.”

“The purpose of the Senior Board is to provide the young people of our city with a suitable atmosphere where teenagers may learn skills, practice the arts, participate in social events, and dance to live bands under the best possible conditions.”

“Teen Town is open every afternoon, Tuesday through Friday, under the direction of Mrs. Sidney MacLean.”

“John Douglas, Mountain Home, told police someone removed his wallet from a locker at Health World, while he was working out between 4 and 5 p.m. The wallet contained $28 in cash, credit cards and other identification.”

“Dawn Thacker, 501 Bellevue Drive, reported the theft of a purse and credit cards. Ms. Thacker, who works at Hot Sams in The Mall, told police someone stole the items from under a table.”

“Estimated value of the items taken is $60.”

June 8, 1992: Tom Hodge, in his column in the Johnson City Press, entertained his readers with several bits of interesting and informative trivia. “…the world’s largest beetle has a 4-inch-long and 2 ½-inch wide black-and-white body. It feeds on fermenting fruit in African forests.”

“Stick cinnamon, used as a spice, is the rolled inner bark of a small East Indian tree.”

“The more than 800,000 kinds of insects make up by far the largest animal group. Some nights, I figure that 799,999 of them are in our back yard, particularly when we’re barbecuing something.”