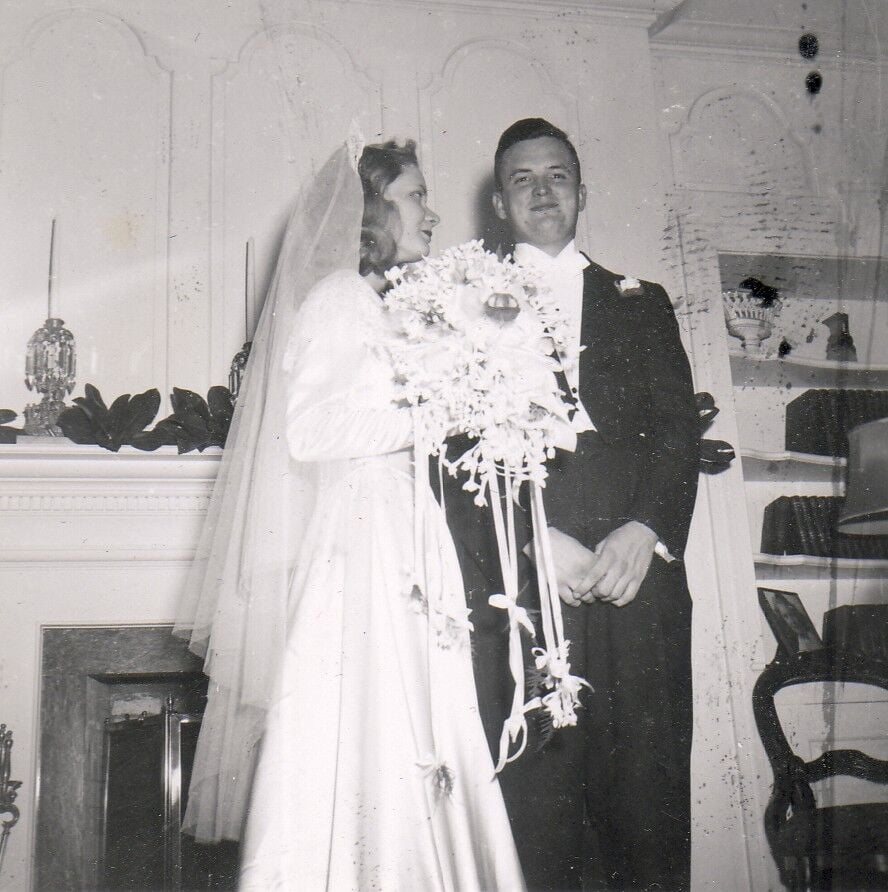 This photograph from the personal collection of Paul David Walker was taken at the wedding reception of Sue Powell Carr to David Hinks Walker. The two were married in July of 1946.

July 28, 1870: The Herald and Tribune reported, “The masonry for the Turnpike Bridge near Nola Chucky has been contracted for and now it is the duty of parties living in that section of the country to subscribe liberally toward the structure of the wood part. By so doing the whole bridge can be completed in a few months. We are sure that nothing would add more to the convenience of the citizens south of the river in bringing their product to market than the completion of the bridge.”

The Nola Chucky was spelled that way in 1870.

The Herald and Tribune was, and still is a newspaper published in Jonesborough, which was spelled that way in the pages of the newspaper.

July 28, 1910: The Johnson City Comet reported, “Yesterday afternoon, a special train over the C.C. & O. brought a large crowd of prominent members of the affiliated chambers (sic) of commerce (sic) of North and South Carolina to the city. They were met at the station by a committee from the Commercial Club and taken to the Soldiers’ Home to see the base ball (sic) game and later driven over the city. They left that night for Dante and will return through here tonight.”

Dante is a town in Virginia. It is about 70 miles from Johnson City.

July 28, 1921: A century ago today, the Oakland Tribune reported news about Johnson City with a dateline from Washington, D.C. “The Johnson City, Tenn., old soldier’s home was characterized as a ‘mad house,’ and the Fort McHenry, Md., hospital described as fit only for a sewage disposal plant today by Col. Chas. R. Forbes, war risk insurance director, before a Senate committee. Col. Forbes said liquor and narcotics were sold among the 900 former service men at Johnson City, and the bureau was powerless to correct the situation for lack of jurisdiction.”

The Oakland Tribune was, and still is, a newspaper published in Oakland, California. We do not have access to any newspapers that were published in Johnson City in 1921.

The bride, who was escorted to the altar by her father, was gowned in cream satin fashioned with a net inset yoke which was outlined in a deep bertha ruffle of imported Chantilly lace. A full skirt bordered in lace which terminated in a cathedral train, fell from a close-fitting bodice. Her veil of imported illusion cascaded about her shoulders from a coronet of Chantilly lace which matched that on her gown.”

“The matron of honor, Mrs. John W. James of Lynchburg, Va., sister of the bride, and the six bridesmaids, Misses Kathryn Hunter, Gwen Wallace, Mary Lou Phetteplace of Bristol, Charlotte Whitefield and Rose Terry of San Antonio, Texas, and Shirley Gregg of Richmond, Va., all wore frocks of aqua marquisette in a drop-shoulder model, which was similar in design to the bridal gown. Barrettes fashioned of delicate pink tube roses were worn in their hair and their bouquets were of tube roses and gardenias in a matching pink.”

“Carol Carr, daughter of Mr. and Mrs. Phil Carr, wearing a white organdy frock modeled after those of the bridal attendants, was the flower girl, scattering white rose petals.”

“A reception at the Carr home on Ridgemont Road followed the wedding. The reception suite was decorated in white gladioli, and white roses were used in the dining room where the bride’s table was appointed in white and green and silver, and centered with a tiered wedding cake.”

July 28, 1959: According to the Johnson City Press-Chronicle, the Junior Auxiliary was planning a fashion show to be held on Sept. 11.

“Committee chairmen for the affair whose theme is ‘King’s Fashion Edition for Fall,’ were announced by Mrs. Herb Shulman, ways and means chairman.”

“A report of the mental health meeting held at the Clinic was given by Mrs. Charles Bolton, Jr. Mrs. Ben Hall, president of the auxiliary also attended the session.”

“It was announced that Mrs. David Walker, an associate member, would be in charge of the doll project this year.”

July 28, 1971: Fifty years ago today, according to the Johnson City Press-Chronicle, “Thomas Men’s Shop yesterday reported the theft of a pair of men’s shoes. According to the report filed with the police department, the shoes were taken from the rear of the shop. The thief ran from the store through an alley.”

July 28, 1996: Twenty-five years ago today, the Johnson City Press reported information about a possible location for Johnson City’s new library. In an article carrying the byline of Jim Wozniak, readers learned, “The leading site for Johnson City’s new public library is, to some, a hot spot for undesired activity that needs to be removed, but the owner and manager believe they have a nice place that receives a bum rap from the media.”

The story went on to say, “While officials actually are looking at buying a two-square block area, the focus of attention has centered on the Economy Inn, 106 W. Millard St. It is a business that has received plenty of unflattering attention.”

“’There has been some criminal activity associated with people staying there,’ Police Chief Ron Street said.”

“Among the offenses he cited are assault, shootings, aggravated assaults and theft. Street said his department also has arrested prostitutes at the motel or those who suggest going there.”

“A breakdown of the 1,648 calls shows the most common is fighting — 237 of them. The second and third most common are trespassing and public intoxication at 223 and 211, respectively.”