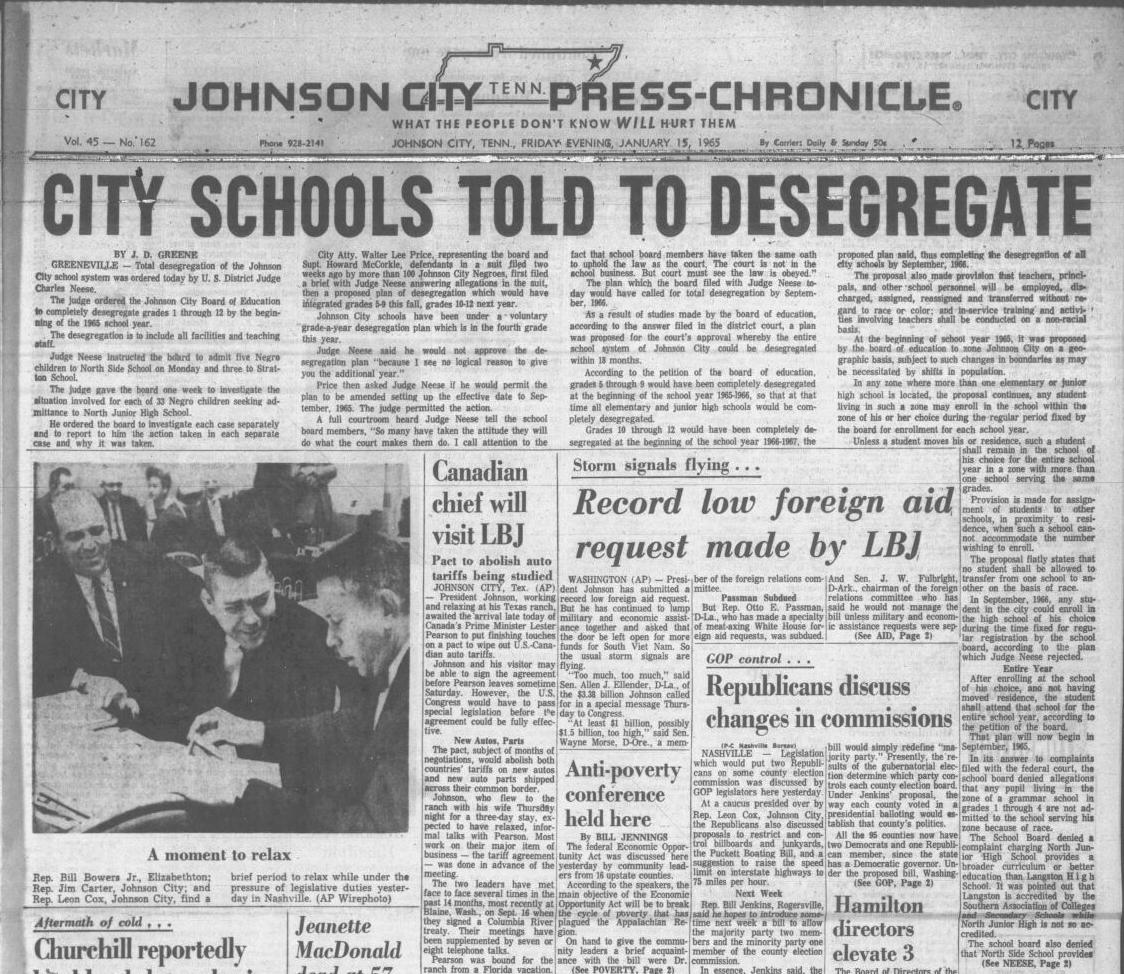 A 1965 edition of the Johnson City Press-Chronicle reports a federal judge's order for Johnson City Schools to desegregate.

Jan. 9, 1893: “L.J. McIntyre was quite badly injured Friday night while out coasting, hitting a tree and mashing up his head considerably,” according to The Comet.

Jan. 9. 1895: Readers of The Comet learned “W.L. Vines, whose leg was broken last week, is getting along as well as could be expected.”

Jan. 9, 1905: The Chattanooga Daily Times, with a dateline of Johnson City, reported exciting news for a growing city. “A company has been organized for the purpose of putting in a sewerage system in Johnson City. This organization is composed of a number of leading citizens. The charter granting the privilege of establishing this enterprise has been received and work will begin in a few days. A profile of the city is now being made. The paid in capital stock is $2,500 as this will be increased by necessity demands. The board of managers is composed of the following: S.C. Williams, president, S.H. Pouder, P.M. Ward, George T. Wofford and J.A. Pouder.” Twenty-five hundred dollars in 1905 is now worth approximately $73,973 in 2021.

Jan. 9, 1919: The Johnson City Daily Staff reported, with a dateline of Limestone, “Miss Martha Ellen Anderson, 14, daughter of Mr. and Mrs. A.C. Anderson, died at her home at Limestone, Monday and was buried Wednesday morning at Washington College. Miss Anderson, despite her youth, had finished the high school course. She had been sick a short while with influenza.”

Jan. 9, 1927: The Nashville Tennessean reported on crime in Johnson City. With a dateline from Johnson City, readers learned, “One hundred and three criminal cases including two murder cases are on the docket for the circuit court session in Washington county (sic), which will open at Jonesboro Monday.” Additional details revealed, “More than one-fourth of the total consists of liquor cases.”

Jan. 9, 1928: The Chattanooga Daily Times, with a dateline of Johnson City, reported tragic news. “Carl Smith, 21, was almost instantly killed: his brother-in-law, Charles Holly, 24, is believed dying in an Elizabethton hospital, and George Smith, 15, a brother, was seriously cut and bruised when the Smith automobile swerved over Drake’s cliff on Stoney creek (sic), near Elizabethton, late this afternoon.” The article continued to say, “The Smith boys are the sons of Dan Smith, wealthy farmer, who has extensive land holdings between Johnson City and Elizabethton. Mrs. and Mrs. Smith are the parents of twelve children, six sons and six daughters, and the death of Carl and the expected death of Charles Holly, the husband of a daughter, are the first losses in the large family.”

Jan. 9, 1936: The Johnson City Press reported, “Mr. Nat D. Shoun is in Columbus, Ohio, where he is the local representative at the convention of the State Automobile Mutual Insurance company (sic).”

Jan. 9, 1955: Johnson City Press-Chronicle readers learned “Sgt. Raymond M. Highsmith, son of Mrs. Mary Highsmith of ... Virginia St., is serving with the 406th Medical General Laboratory in Japan.” The article went on to say, “In the Far East since February, 1954, Highsmith last served with the 618th Medical Company in Korea. A veteran of 11 years Army duty, he holds the Good Conduct medal and the U.N. and Korean Service Ribbons.” Finally, readers learned, “His wife lives in Lahaina, Maui, Hawaii.”

Jan. 9, 1968: “Polly’s Pointers” was a popular housekeeping hints column carried in newspapers, including the Johnson City Press-Chronicle. Someone signing herself, ‘An American” wrote this: “Some of my best thoughts come while I am vacuuming. Recent ones were on wedding gifts and what to give if one does not want to add to chosen china, silver or crystal. I had a great thought. Why not an American flag? We would never have had our large one had it not been a gift. Few young marrieds have flags, so it seems to me this would be a wonderful wedding gift.” “An American” received $1, since Polly used her pointer. A dollar is 1968 is now worth about $7.48 today. (Source: www.in2013dollars.com)

Jan. 9, 1970: A recent snowfall seems to have been the cause of two local crimes, according to the Johnson City Press-Chronicle. “Carl Estep, ... Orleans St., told police officers yesterday a snowball was thrown through a storm window on his home. Officer John Robinson investigated.” Another news item related, “Mrs. James Miller, Horse Shoe Bend, reported to police officers yesterday the theft of a snow sled from her front lawn yesterday at 4 p.m. The sled was valued at $15.” Fifteen dollars in 1970 is approximately the same as $101 in 2021. (Source: www.in2013dollars.com)