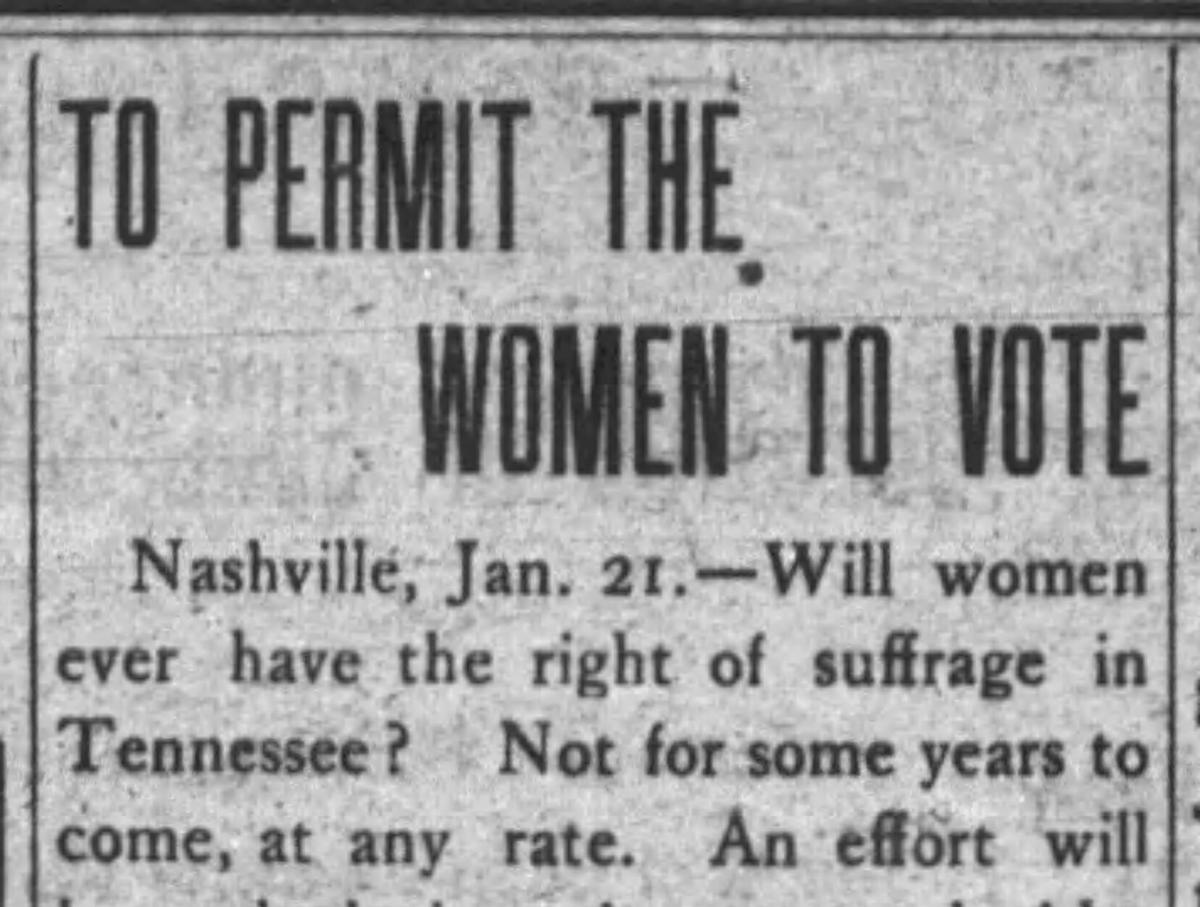 In 1911, The Comet published an article about women's suffrage. Its take: women won't have the right to vote for years to come. The 19th Amendment giving women the right to vote was ratified nine years later in 1920.

Jan. 26, 1888: The Comet reminded readers that there would be a total eclipse of the moon the following Saturday night.

Jan. 26, 1892: “Joe Summers, the merchant duke of Johnson City, is sufficiently convalescent to again enter the business arena of this bustling world,” according to The Comet.

Jan. 26, 1907: With a dateline of Johnson City, The Chattanooga News reported, “The 100th anniversary of Gen. Robert E. Lee’s birthday was celebrated at the home of Mr. and Mrs. Isaac Harr. An appropriate program was carried out and the elegant home was beautifully decorated. A large number were present. The affair being given by the Daughters of the Confederacy. Delicious refreshments were served.”

Jan. 26, 1910: The Herald and Tribune, a newspaper in Jonesboro, which was spelled that way at that time, reported on the recent death of a leading citizen and physician. With a dateline of Johnson City, readers learned, “Dr. J. A. Kirkpatrick, one of the most prominent citizens of Washington county — after several months’ illness of Bright’s disease, died in this city Monday at 12 o’clock, at the home of his son. He was born in Jefferson county June 20, 1845.”

Additional details revealed that Dr. Kirkpatrick “served three years in the confederate army, enlisting at the age of 16, and was a member of Camp John B. Gordon, of this city.”

Jan. 26, 1911: Mrs. C.O. Biddle was Society Editor of The Comet. She reported that the Bachelor Girls’ Club had recently held a meeting at the home of Mrs. Thad A. Cox; both Mr. and Mrs. Cox were in Florida at the time.

The same issue of The Comet posed the question, “Will women ever have the right of suffrage in Tennessee?” The answer was “Not for some years to come, at any rate.”

Jan. 26, 1917: The Johnson City Daily Staff reported, “James Arnett, charged with having ruined his stepdaughter, Estelle Summers, aged seventeen, and charged with violating the age of consent statute, was given a hearing before Judge Pierce Thursday afternoon and was bound over to the next circuit court at Elizabethton.”

The article continued, “At the trial, Arnett denied the charges, while the girl testified that they were true. The offense was committed in Carter county (sic), hence Arnett was taken to jail at Elizabethton. Arnett is a man about forty-five years of age. He was arrested by Deputy Sheriff Charles Martin.”

Jan. 26, 1925: “Peter Pan” was playing at the Majestic Theatre, according to an advertisement in the Johnson City Staff-News. The admission charges were 10 cents and 30 cents.

Jan. 26, 1930: The Johnson City Chronicle reported on a revival at West Main Street Christian Church. The revival “continues with interest and enthusiasm increased at each service.”

Friday night the evangelist, Elder R.L. Peters, preached to a capacity house from the subject, ‘The Eternal Life Insurance Company.’”

The article continued to say, “At the close of the sermon, J.W. Williams, of the First Christian church (sic), gave an inspiring talk and expressed his pleasure in being in the service.”

The article continued, “Now engaged in turning out plain sewing of all kinds, the room later will turn to making surgical dressings and knitting, but materials are not yet available. Uniforms will soon arrive for every worker.”

Readers also learned, “It was pointed out that the Press-Chronicle building is out of the one-hour-parking zone, so volunteer workers may park their cars without fear of traffic tags.”

The Colonel also “had a year’s additional work in each of the following universities: Johns-Hopkins University, University of Omaha, and Fitchburg Massachusetts State Teachers College.”

Jan. 26, 1967: With headlines above the masthead, readers of the Johnson City Press-Chronicle were invited to “Welcome Kiwanis International President Glenn Reed” to Johnson City.”

Jan. 26, 1979: The Johnson City Press-Chronicle reported that Natalie Bailey, the librarian at Science Hill High School, had recently returned from a special training session. Mrs. Bailey was “among three Tennessee teachers selected by the National Education Association to participate in a National Women’s Leadership Training Program.”

Jan. 26, 1983: Tom Hodge quipped in his Johnson City Press-Chronicle column, “Talking to house plants might be beneficial for them – but if you begin to get answers, you just might be having a problem, friend.”