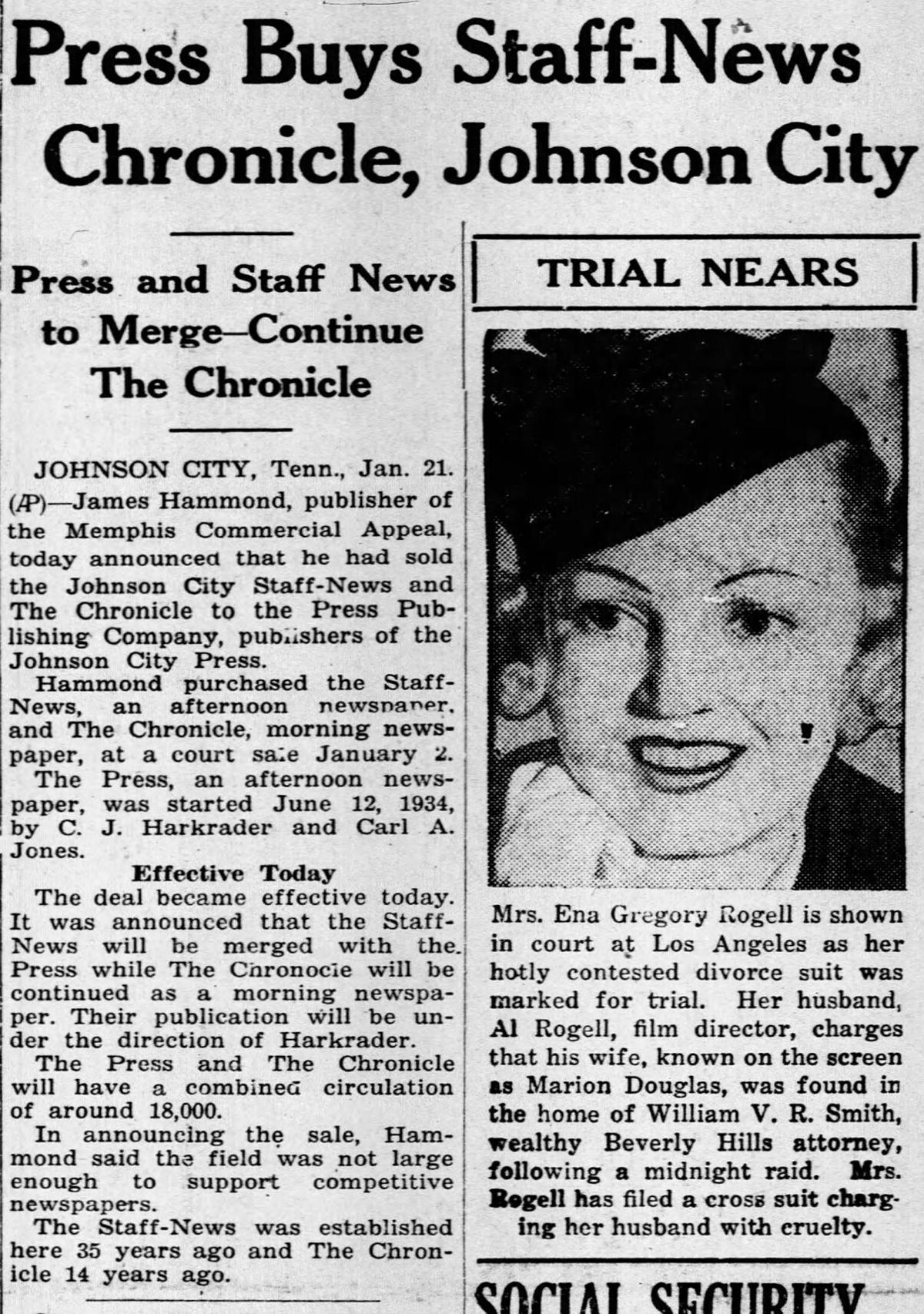 Jan. 22, 1903: The Comet advised, “Where stores are lighted properly a stranger will always go. He shows prosperity, also that the owner has goods for inspection. It is a special invitation to call. Light up.”

Jan. 22, 1906: With a Johnson City dateline, The Chattanooga News reported on the death of a retired merchant. “Peter G. Range, after being confined to his room for more than a month, died Friday at the home of his son, James J. Range. Mr. Range, was almost 87 years old and was one of the best known and loved of our citizens. In the early days of our town the deceased was a prominent merchant.”

Jan. 22, 1910: With a Johnson City dateline, the Chattanooga Daily News reported, “Thursday, Jan. 20, at the home of his daughter-in-law, Mrs. Fannie Crumley, Jackson Crumley, one of the best and most lovable citizens of our town, went away to his heavenly reward. Mr. Crumley, known by everyone in this city by the name of ‘Uncle Jack,’ was born in Sullivan county (sic), Sept. 29, 1834. In 1870 he moved with his family to this city, and was a leading lumber dealer.

Jan. 22, 1919: The Johnson City Daily Staff reported on the serious illnesses of several Johnson Citians. “Friends of Miss Amelia Slack will regret to learn of her illness with Influenza (sic).” “Miss Ruth Barlow is quite ill at her home on Locust street (sic).” “Ed Wagner, manager of the Washington County Gas Company reported as ill with an attack of influenza is fast convalescing and expects to return to work within the next few days.” “Miss Ethel McCall is confined to her room with influenza.” “Friends of Miss Anna Dudley Wood, young daughter of Mr. and Mrs. Hackett Wood, formerly of this city, will be glad to know that she is rapidly recovering from an injury to her eye, at her house in Philadelphia.”

Jan. 22, 1927: The Chattanooga Daily Times reported, with a Johnson City dateline, on the death of a veteran. “Famed for having been the first American soldier wounded in the World war (sic), George Ashburn 27, of Crossville, Tenn., died here at the National Soldier’s sanatorium Jan. 4, according to discoveries made today. Ashburn was admitted to the hospital Dec. 3, suffering from acute pulmonary trouble, and lived but a few days. On account of the brief hospitalization period, his records were not completely checked up until this week, when his unusual record was discovered. He is survived by a wife and child at Crossville. Ashburn was a member of the Eighteenth infantry, having enlisted Dec. 16, 1916.” The National Soldier’s sanatorium is now known as the James H. Quillen VA Medical Center.

Jan. 22, 1928: The Knoxville Sunday Journal, with a Johnson City dateline, reported on the construction of a new road from Johnson City to Elizabethton. “Grading for the Johnson City-Glanzstoff highway (sic) from the city limits to the Carter county (sic) line, to be done by the state, will be begun early next week, according to Hughes and Ray, who have the road contract, recently awarded. The link is five miles long, being a direct line from Johnson City to the large Glanzstoff and Bemberg plants near Elizabethton.”

Jan. 22, 1932: The Bristol Herald Courier reported on the death of a prominent Johnson City businessman. With a dateline of Johnson City, readers learned, “Walter G. Smith, one of Johnson City’s best known business men (sic), died from an apparent cerebral hemorrhage at 5:30 o’clock this afternoon.” More details stated, “Mr. Smith at 4:30 o’clock visited the office of Dr. Ralph Miller with the intention of having several teeth extracted. He was stricken unconscious as he sat down in the dentist’s chair, and removed to Appalachian hospital (sic). Death followed an hour later without his regaining consciousness.”

Jan. 22, 1935: With a dateline of Johnson City, the Chattanooga Daily Times reported on recent change of hands in the local newspaper market. “James Hammond, publisher of the Memphis Commercial Appeal, today announced that he had sold the Johnson City Staff-News, and the Chronicle to the Press Publishing Company, publishers of the Johnson City Press.” The article further stated, “Hammond purchased the Staff-News, an afternoon newspaper, and the Chronicle, morning newspaper, at a court sale Jan. 2.” More details stated, “The Press, an afternoon newspaper, was started June 12, 1934, by C.J. Harkrader and Carl A. Jones. The deal became effective today It was announced that the Staff-News will be merged with the Press, while the Chronicle will be continued as a morning newspaper.”

Jan. 22, 1955: With a dateline from Johnson City, the Bristol Herald Courier reported, “The Happy Valley Warriors used the free throw lane to advantage here tonight to turn back an unusually stubborn Johnson City Hilltopper quintet, 51-43. Coach Sidney Smallwood’s underdogs actually out-hit the Warriors from the floor, 17 field goals to 12, but Happy Valley connected on 26 of 39 foul attempts to ice the decision.”