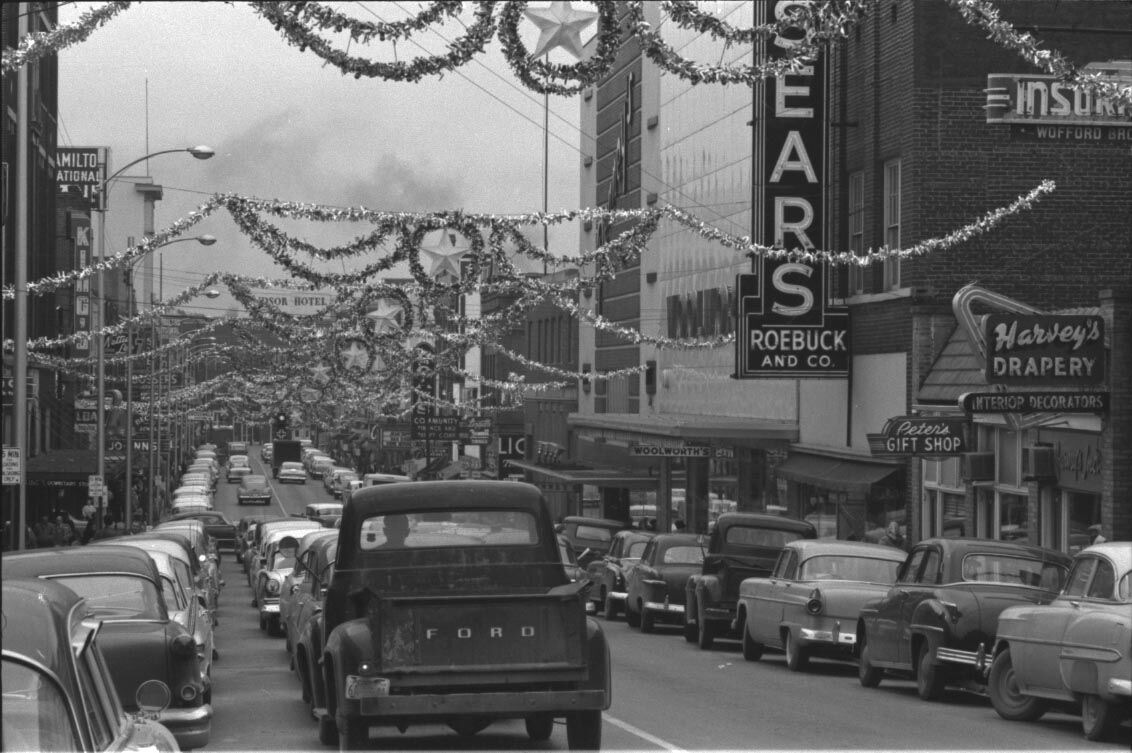 The downtown Johnson City site of Sears is at right in this photo from the 1950s. Photo/Johnson's Depot

Jan. 2, 1890: The Comet reported on the progress of the First National Bank, which “presented each of its customers with a seat vest pocket memoranda on New Year’s day. In the book was a statement of the bank at the close of its first year’s work. By reference in it we find that the bank’s resources amounted to over $200,000, and it has reached that snug little sum in one year. It is a remarkable growth and is a much better showing than any National bank in East Tennessee can make. It is a good barometer of the progress of Johnson City, and would not be reliable if it showed otherwise.” Two hundred thousand dollars in 1890 is equivalent to about $5.7 million today.

Jan. 2, 1902: The Comet reported the Bruners, proprietors of a local department store, opened on Christmas Day to give approximately 600 children “a handsome toy and a poke of candy each. Some of the children were very poor.” The article further said, “The Bruners are very prosperous business men — and no wonder. The Lord only stews prosperity in the pathway of such big-hearted men.”

Jan. 2, 1923: The Johnson City Daily Staff reported, “…. a bill will be introduced at the General Assembly providing for a referendum vote and a brand new charter for Johnson City and the election of five dollar a year aldermen who will then select a city manager.” Five dollars in 1923 would be worth about $76 today.

Jan. 2, 1961: Sears, located at 319 East Main Street, advertised in the Johnson City Press-Chronicle free products to entice customers to the store that day. Free coffee and donuts would be served to Sears customers that morning between 7 and 9 a.m., and the first 200 adult customers of the day would receive a free box of Tide detergent.

Jan. 2, 1970: The Johnson City Press-Chronicle reported on an upcoming school board meeting. “The Johnson City Board of Education will meet Monday at 8 p.m., according to Supt. Howard McCorkle.” The article continued, “The superintendent will likely make a recommendation that the policy of excluding students who marry during the school year be discontinued.” Readers learned, “Other items on the agenda are report on preparation of a code for civic club-sponsored activities at Science Hill; re-election of superintendent and supervisory staff; and approval of new teacher and substitutes.”

Jan. 2, 1980: George Washington Savings and Loan, with offices both in Johnson City and Jonesboro (spelled that way at the time), advertised their money market certificates as paying 11.854% interest in the Johnson City Press-Chronicle.