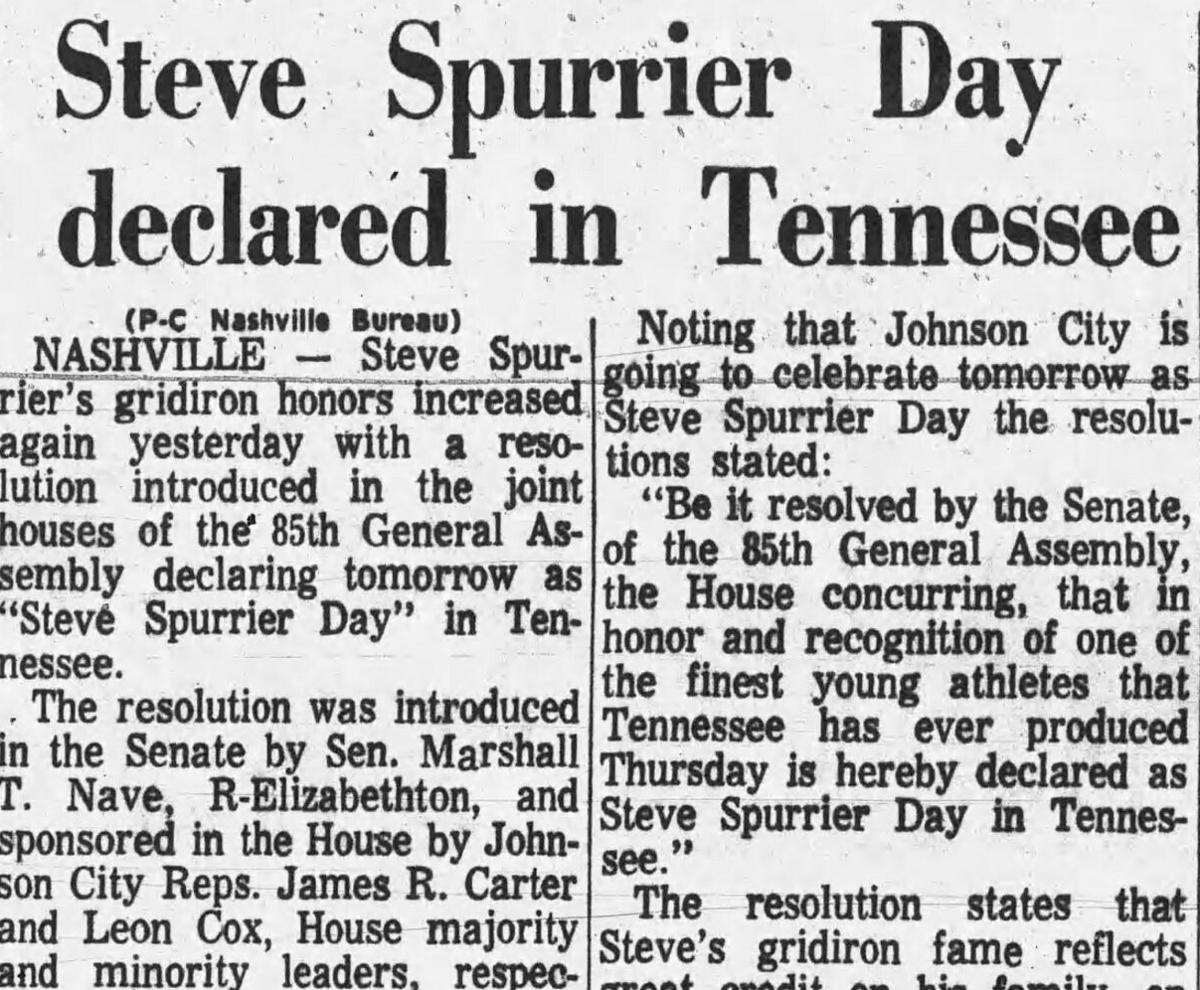 Steve Spurrier Day was proclaimed in Johnson City, as well as throughout the State of Tennessee on Jan. 12, 1967.

Jan. 12, 1888: The Comet reported, “The Johnson City Foundry and Machine Works are crowded with work. They are at work on a large lot of bridge castings for the C.C. & C. railroad and an order for car wheels from Pulaski City, VA.”Jan. 12, 1893: The Austin Weekly Statesman, a newspaper in Austin, Texas, carried a remarkable story with a dateline of Johnson City, Tenn., and a date of January 4.“ Last night a mob of 500 masked men entered the jail at Bakersville, N.C., and took Calvin Snipes, who murdered Isaac Osborne, a prominent citizen of Mitchell county (sic), in a dense forest about half a mile away and lynched him. Eleven of the sheriff’s posse were killed in their efforts to defend the prisoner. About twenty-five of the mob were killed, and among the dead and wounded are some (of) the most prominent men in the county. The facts which led up to the terrible affair are as follows: Aaron Wiseman and Calvin Snipes were partners in an illicit distillery in Mitchell county (sic), N.C., and told W. Osborne and Isaac Osborne, two brothers, where the distillery was situated. W. Osborne reported the distillery to the officers of Bakersville, N.C., and helped destroy it. Wiseman and Snipes suspected Isaac Osborne as the reporter. On the night of Aug. 27, Snipes and Wiseman went to Isaac Osborne and called him out. He came to the door and they opened fire, riddling him with bullets. Wiseman and Snipes were arrested, but sufficient evidence was not obtained against Wiseman and he was released. Snipes was bound over to the superior court on purely circumstantial evidence. He was placed in jail and after being confined two weeks confessed to the killing in the manner above related.”

“Justice might take your part, but injustice takes you all.”

“Too many irons in the fire eat up much expensive coal.”

“Don’t take a polite acknowledgement for an encore.”

“Curiosity ofttimes (sic) hides behind the mask of solicitude.”

Jan. 12, 1923: The Winona Times, a newspaper in Winona, Mississippi, reported on a recent wedding. “Rarely has there been solemnized in this city a more beautiful wedding that that of yesterday at High Noon in the First Methodist Church when Miss Eloise Pope, the sweet and attractive daughter of Rev. and Mrs. S.L. Pope and Mr. Dan B. Wexler of Johnson City, Tenn., were united in the holy bonds of wedlock.”

Ten dollars in 1944 would be equivalent to approximately $148 today. (Source: www.in2013dollars.com)

Jan. 12, 1950: Readers of the Johnson City Press-Chronicle learned “Mrs. Frank Knisley and infant daughter, Ester Lee, are visiting her parents, Mr. and Mrs. Ray Chalker, before leaving for their home in Chattanooga.”

The article also stated, “Nave, who entered the Army last July, completed basic training at Fort Jackson, S.C., and has now been awarded his parachutist’s wings after having completed his course at Fort Campbell, which included five training jumps.”

Jan. 12, 1970: The Johnson City Press-Chronicle reported that the January term of the Criminal Court started that morning in Jonesboro, which was spelled that way at the time. The first order of business was the selection of a grand jury.

Jan. 12. 1980: Readers of the Johnson City Press-Chronicle learned that four men had been killed in a fire downtown. Several other men were injured in the fire, which was in a Downtown Square rooming house.

More details revealed, “Two of the dead were identified as Haskeil Slagle, 69, and Lum Whitt, 85. Two others remained unidentified, although it was believed that one of the victims was one of the Cox brothers renting the rooms where the fire appeared to have started.”

The story continued to say that the fire took place at Sports News, which was located at 111 Spring Street. Sports News had “16 rooms, mainly rented by elderly veterans. The downstairs of Sports News housed a used book store and a restaurant.”