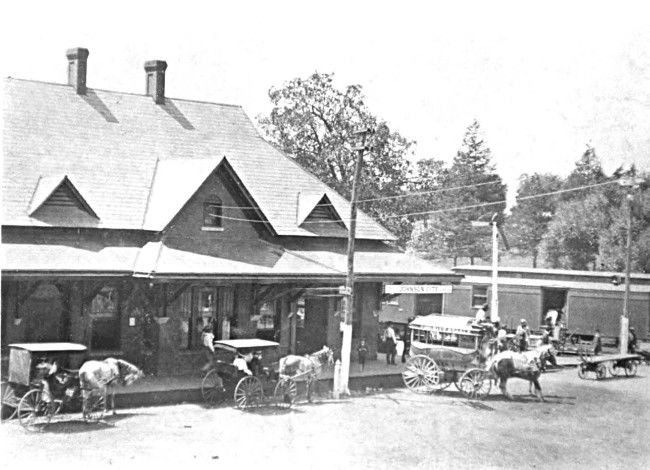 Feb. 13, 1890: Readers of The Comet learned about railway plans. “As mentioned last week in the Comet the board met on Thursday to consider a proposition made by Col. W.P. Dunavant and Capt. Sam Tate Jr., asking for the franchise to build a street railroad in Johnson City. After discussing the proposition at length the committee was continued and Gen. Wilder agreed to pay the expenses of sending the committee to Chatta-nooga to investigate the matter thoroughly before the franchise is granted. The committee will go to Chattanooga to-day (sic) and the matter will be settled on their return.”

Feb. 13, 1911: The Nashville Banner, with a dateline of Johnson City, reported on the possibility of a reform court. “Saturday afternoon the Ministers’ Association of Johnson City and the County Board of Education held a meeting as a result of the shooting of Prof. Gray by John Smith, a school boy. ... It was the sense of the meeting that a compulsory school law should be enacted for Washington County, that a juvenile reform court should be established for Washington County and that the Legislature be asked to enact a bill to enable the county to issue bonds for $100,000 with which to buy a farm within three miles of Jonesboro on which shall be located an orphans’ home and school.”

Additional details revealed, “Young Smith was indicted by the Grand Jury Saturday for maliciously and feloniously shooting Prof. Gray with intent to kill. He gave bond in the sum of $5,000.”

Jonesboro was spelled that way in 1911.

There was not a daily paper published in Johnson City in 1911. The Comet was published as a weekly newspaper.

Feb. 13, 1923: The Journal and Tribune, a newspaper in Knoxville, reported an improvement would soon be made the railroad station. Readers learned, “A second story is to be placed on the station of the East Tennessee and Western North Carolina road here, work to begin by April 1 and rushed to completion. The general officers of the road are here. The road has a parlor car service from Johnson City to Boone, N.C. Along this line is scenery famous for its grandeur.”

Feb. 13, 1926: The Daily Gazette and Mail, a newspaper in Morristown, Tennessee, reported on a new grocery store in Johnson City. With a dateline of Johnson City, readers learned, “The first Clarence Sanders grocery store to be located in Johnson City will have its formal opening Saturday, February 13th at 103-105 West Market street (sic). Elaborate plans have been made for the opening which will include 5,000 carnations to be given to all lady visitors and 5,000 cigars for the men. A seven piece jazz orchestra will furnish music all day on Saturday for the visitors.”

There was not a newspaper published in Johnson City on February 13, 1926.

Feb. 13, 1936: The Johnson City Press informed readers that a central council would be formed; members would be representative of civic clubs. “This was decided at a meeting held last night in the chamber (sic) of commerce (sic) rooms in the John Sevier hotel (sic), when representative of the various organizations got together and unanimously approved a proposal to form such a council.”

More details revealed, “The meeting was called by J.E. Coad, secretary-manager of the chamber of commerce (sic). He explained today that the council is designed to handle matters that frequently come to the attention of all civic clubs.”

Feb. 13, 1940: The Chattanooga Times, with a dateline of Johnson City, reported on the death of Thomas J. Ervin. “Thomas J. Ervin, 50, prominent Washington county (sic) farmer and son of the founder of the city of Erwin, county seat of Unicoi county (sic), died in a local hospital today of pneumonia. ...

“The article continued, Erwin originally was called Ervin after its founder, but due to an error attributed by old-timers to a postal clerk, it became Erwin, which it remains to the present day.”

There was not a newspaper published in Johnson City on February 13, 1940.

Feb. 13, 1943: The Johnson City Chronicle reported on a Boy Scout Week activity. “Boy Scout Tommy Brumit of Troop 38 was mayor of Johnson city (sic) Thursday, elected Tuesday by his fellow ‘commissioners’ to rule over a phase of the local observation of Boy Scout Week, Feb. 6 -12, the national organizations’ 33rd anniversary. Four other Scouts served on the board of commissioners and seven took over the board of education’s duties for the day.”

The article continued, “The youths were elected for their day’s reign by popular ballot Monday. Administration Day is directed by D.R. Beeson, City Manager Hobart Greene, Joe A. Summers and Raymond Huff.”

Feb. 13, 1950: The Johnson City Press-Chronicle reported news about Judge Thad Cox’s funeral, which would be held that afternoon. “Judge Cox, dean of Upper East Tennessee lawyers and powerful in state Democratic politics, died of a circulatory disorder. He had been seriously ill several months.”

The article continued to say, “Judge Cox participated in state and national affairs of his party. He was East Tennessee spokesman for Senator Kenneth D. McKellar, with whom he maintained a close friendship through the years.”

More details included, “The Judge was honored highly by associates at the bar,... once served as president of the Tennessee Bar Association. In 1917 he was appointed to the State Supreme Court by Governor Tom Rye, now a resident of Paris, Tenn.”

“He had extensive banking interests. He took pride in serving as president of the Farmers and Merchants Bank at Limestone and in administrative and directorial positions in Johnson City and Elizabethton banks.”

Feb. 13, 1960: The Bristol Herald Courier, with a dateline of Johnson City, reported on a recent Langston High School basketball game. “Slater High’s Wolves advanced to the finals of the district tourney by edging out a 70-69 victory over Langston High here tonight.”

Finally, readers learned, “His wife, Nancy, lives on Rt. 1, Jonesboro.”Jonesborough was spelled that way at that time.