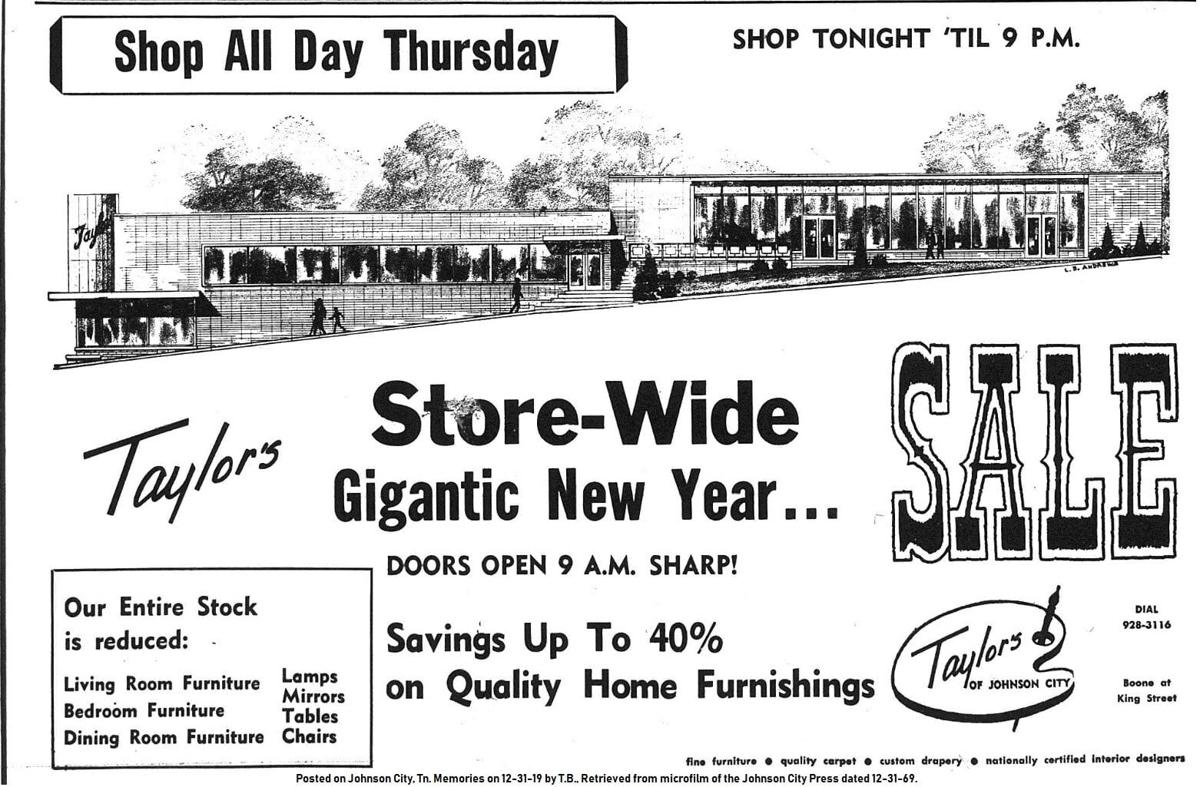 Dec. 31, 1969: Taylor's of Johnson City, a furniture store at the corner of Boone and King streets, advertised a New Year's sale.

Dec. 31, 1885: “Colonel Thomas Matson resigned as Superintendent of the ET&WNC … to open and operate the Johnson City Foundry & Machine Shop.” Sources: “The Railroads of Johnson City by Johnny Graybeal.”

Dec. 31, 1903: The Comet reported news from the Soldier’s Home. “Chief Surgeon Powell has resigned and Dr. Robinson has been appointed in his place.”

Dec. 31, 1917: The Shreveport Journal, a newspaper in Shreveport, Louisiana, reported, with a dateline of Johnson City, “This city and section are rapidly recovering from the bitter cold prevalent Saturday night and Sunday morning when the thermometer registered 25 degrees below zero. The temperature this morning was 20 degrees above zero.”

Dec. 31, 1918: Readers of The Johnson City Daily Staff read sad news. “Dr. E.A. Long will leave on train ... for Cleveland, Tenn., to attend the funeral of his nephew, Capt. Atlee Seymour, who died in Manila, P.I., (in November). Death was due to influenza followed by meningitis. The funeral of Capt. Seymour was held by the Masons in Manila on Sunday, November 10, and his body was shipped to this country on a transport leaving Manila November 15th.”

Dec. 31, 1926: The Johnson City Chronicle reported on recent wet weather in the area. “Though Tennessee has been and still is, in the path of the greatest flood in its history, Johnson City and the upper part of East Tennessee has so far escaped serious damage on this account. Rains have continued for almost two weeks, but these have been of a slow and light type, and the accumulation of water has run off at once.”

Dec. 31, 1930: The Selma Times-Journal, with a dateline of Johnson City, reported tragic news. “Lloyd Hale, 18, died today of burns received last midnight when an automobile in which he and four other high school students were returning from a holiday party at a friend’s home which wrecked and caught fire. Catherine Weems, 16, was believed by physicians to be injured fatally.” The story continued, “After a collusion with a taxicab, the car in which the (students) were riding swerved to the side, leaped the sidewalk, struck a tree, overturned and burst into flames.” More details revealed, “The accident occurred half a block from a fire station and firemen repaired to the scene quickly, but were unable to extricate Hale until the flames were extinguished. The other four were rescued shortly after the wreck.” Finally, readers learned, “…A.H. Hale, father of the dead youth, swore out warrants charging murder against (driver and occupants of the taxicab). Bonds have not been made.”

Dec. 31, 1940: The Johnson City Press reported, “Henry McAdams, 77, relates that he has never taken a dose of medicine prescribed by a doctor throughout his life time. He is still able to plow all day.”

Dec. 31, 1969: Taylor’s of Johnson City, a furniture store at the corner of Boone and King streets, advertised a New Year’s sale. The Taylor family still has the building, as Sam Taylor’s The Property Experts, a real estate, remodeling and interior design company, operates in the lower section.