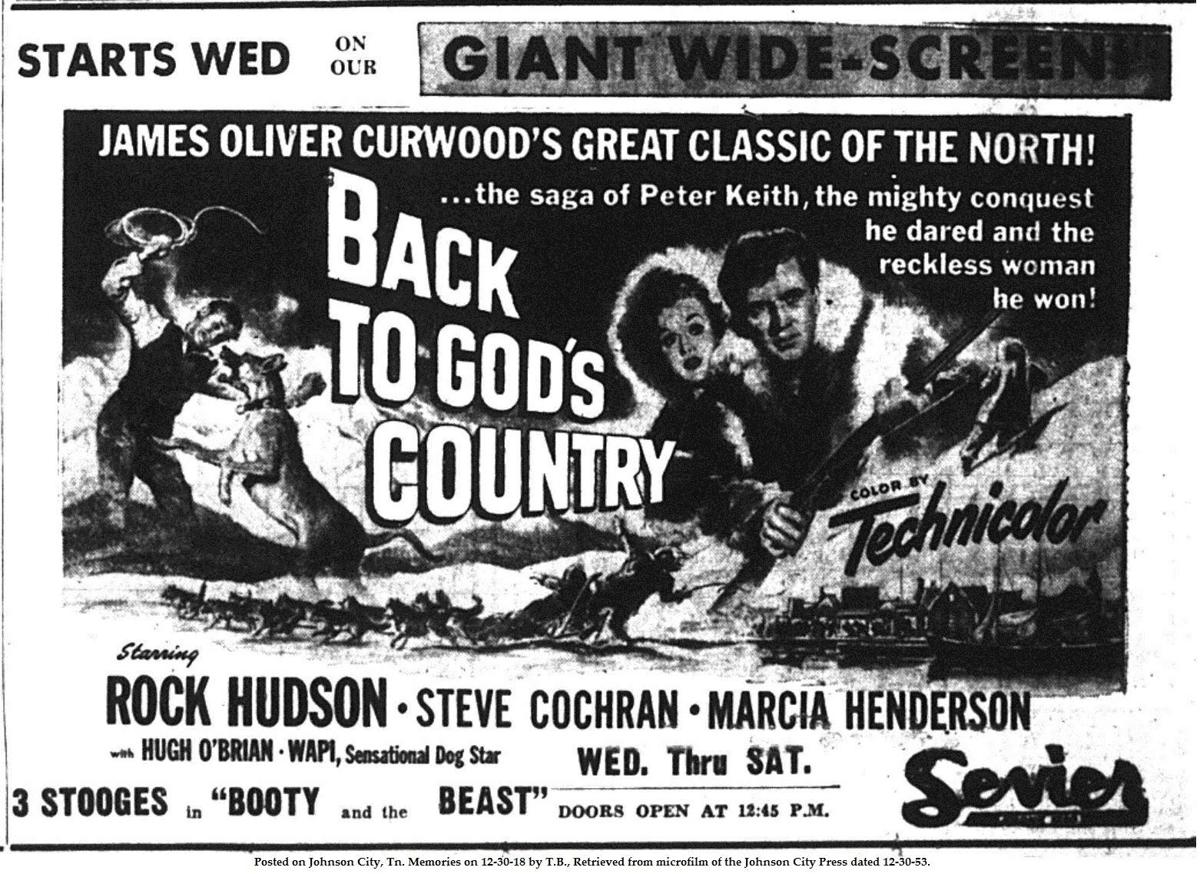 Dec. 30, 1953: "Back To God's Country" starring Rock Hudson was playing at the Sevier Theatre on Spring Street in downtown Johnson City. It was accompanied by the Three Stooges short "Booty and the Beast."

Dec. 30, 1862: The battle of Watauga Bridge was fought, the first of several engagements at Carter’s (Watauga) station.

Dec. 30, 1899: The Knoxville Sentinel, with a dateline of Johnson City, reported, “It might be of interest to many to know that this city closes the year with 6,000 people. It has an area of four square miles, fifty stores, four railroads, sixteen factories, ten shops, five schools, 1,400 school children, twelve doctors, ten churches, sixteen lawyers, eight saloons, two hotels, one restaurant, one water tank, one bank, water works and street car plant, two fine hotels not yet opened, six democrats for every half dozen republicans, and two policemen.”

Dec. 30, 1909: The Comet readers read a sad obituary – that of a dog. “Mr. ‘White Nose’ is no more. In other words, he is dead – dead as one of Dicken’s door nails. He departed this life at 9 p.m. the 22 of December 1909. Mr. ‘White Nose” was a dog, and no common one. He was of small, medium size, compactly built and of (indecipherable) is followed by his faithful dog to his unmarked grave. May there not and ought there (indecipherable) enjoyable future for the good and faithful dog? Such reward would but add to the blessedness of heaven. On the 23rd, Mr. White Nose, neatly coffined, was buried on the high ground north of the southern end of the C. C. & O. tunnel under Indian Ridge, there to remain as a ‘mascot’ watch, until when? The resurrection. At any rate, peace to his ashes.”

Dec. 30, 1918: Readers of The Johnson City Daily Staff learned that “Mrs. Seth Arnold is improving from a severe case of influenza.” This was during the Spanish Flu pandemic.

Dec. 30, 1936: The Johnson City Chronicle reported on military recruitment efforts. “Possibility that Johnson City U.S. army (sic) recruitment office will be maintained a month after December 31 due to increasing number of applications received was revealed yesterday by Sergeant William H. Robinette, recruiting agent.” The article continued to state, “The office, located in the Clinchfield railway building, was scheduled to close the last of the year.” More details revealed, “Robinette said 56 men had applied for army enlistment in December, and that Monday was a record day for the office, when 19 men applied, and nine were dispatched to Fort Oglethorpe, Ga., for outfitting.”

Dec. 30, 1947: The Bristol News Bulletin with a dateline of Johnson City, reported, “The Milligan College Buffs got back down to the training grid tonight….in Cheek Gymnasium, as they prepared for an invasion of Roanoke, Va., Thursday and Friday nights to play Old Dominion Candy Company’s fast quint.” The article continued to say, “The Buffs get another stern test next Saturday night at Science Hill High School gymnasium when they meet Berea College.” Finally, the article stated, “Milligan has copped seven wins in 11 starts so far this season.”

Dec. 30, 1953: “Back To God’s Country” starring Rock Hudson was playing at the Sevier Theatre on Spring Street in downtown Johnson City. It was accompanied by the Three Stooges short “Booty and the Beast.”

Dec. 30, 1960: Readers of the Johnson City Press-Chronicle learned, “A new rash of parking meter break-ins broke out Wednesday night to plague police. Ten were on Boone Street, two on Spring, and one each of East Market and Tipton streets, officers said.”

Dec. 30, 1980: Wright’s, a local grocery chain, advertised several traditional New Year’s foods in the Press-Chronicle. In addition to grocery staples, hog jowl, black-eyed peas, and cabbage were advertised. Cabbage was 29 cents a pound, Bush’s black-eyed peas were four cans for a dollar, and the hog jowl was 69 cents a pound. Readers were advised to “Start the New Year off Right at Wright’s.” If you were to buy a pound of cabbage at comparable prices now, you would pay about 92 cents for the cabbage. It now takes about $3.16 to purchase what $1 would in 1980. Sixty-nine cents in 1980 is now worth about $2.18.