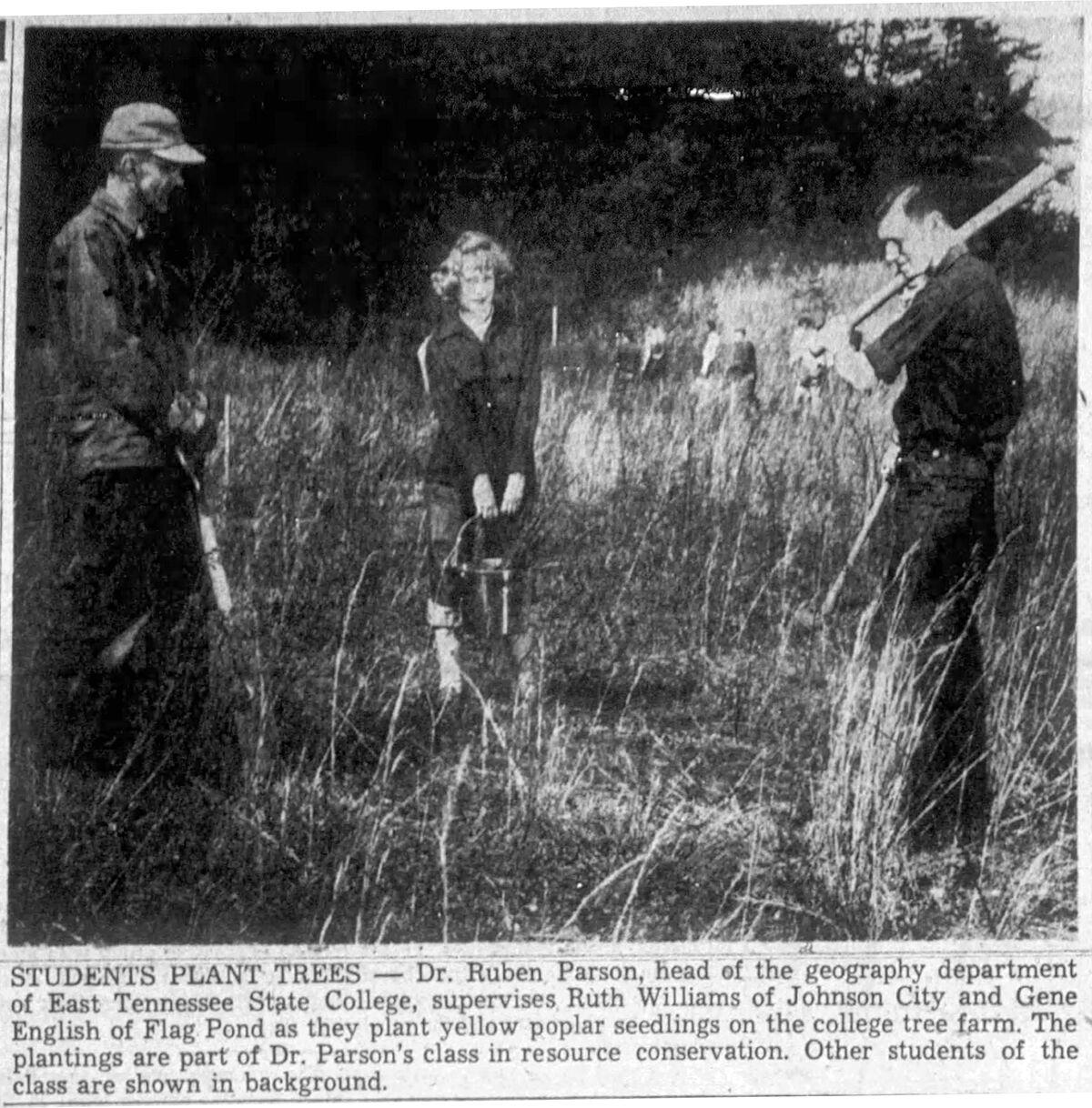 Dr. Ruben Parson, head of the geography department at East Tennessee State College, supervises Ruth Williams of Johnson City and Gene English of Flag Pond as they plant yellow poplar seedlings on the college tree farm. The plantings are part of Dr. Parson’s class in resource conservation file photo. Other students of the class are shown in background.

April 6, 1866: The East Tennessee Union Flag opined and advertised, “The editor of the Union Flag rejoices in possessing a new cooking stove – purchased from Messers. Coffman & Eames of this place, and takes pleasure in saying that it gives entire satisfaction. They have more of the same pattern.”

The East Tennessee Union Flag was a newspaper published in Jonesborough, which was spelled that way on the masthead. The city was spelled as Jonesboro in other parts of the newspaper.

“John Stallings died Tuesday night while having an epileptic fit.”

“Mrs. Clyde Campbell died Wednesday afternoon after a short illness of grip. She leaves a husband and several small children.”

“Uncle” Bert Leonard died Wednesday night at his home near this city. He was about 62 years old and had been in feeble health for several years.”

April 6, 1905: “As The Comet goes to press at noon Thursday the weather man is giving us a good, healthy snow storm.”

“Hon. Thad A Cox returned today from Philadelphia. Mrs. Cox is much improved in health.”

“Mr. N.T. Mills of Mountain City, is in the city for a few days. Mr. Mills is one of the leading livestock men of Johnson County and makes a specialty of Pinebred (sic) Sheep.”

“Mrs. Eugene Lloyd of Doe Valley, Johnson County, is visiting her parents in Johnson City on the occasion of her brother Paul’s visit from Camp Sevier, who expects to sail for foreign ports in a few days.”

Camp Sevier was a military training camp for soldiers during World War I.

April 6, 1920: With a dateline from Washington and a date of April 3, The Kingsport Times reported that a prominent citizen was in quarantine for smallpox. “Representative Sam R. Sells, of the First district of Tennessee, manager for the Wood campaign in his home state, is under quarantine for smallpox in Washington. He is allowed by the health authorities to go about, however, and on yesterday afternoon held a long conference with Representative Norman J. Gould, of New York, Eastern manager for the Wood campaign, who came here from New York on official business.”

The article continued, “Mr. Sells is at his hotel on Maryland avenue (sic), where he was exposed to the contagion ten days ago when a man living at the place was stricken. He and the representative talked together on the day the man became ill. Mrs. Sells and children are at their home in Johnson City, Tenn., having never moved to Washington during the years that Mr. Sells has been in congress (sic).”

The Wood campaign referred to is the presidential campaign in 1920 of Dr. Leonard Wood. He served as personal physician to both President Grover Cleveland and President William McKinley.

Johnson City did not have any newspapers published in 1920.

April 6, 1936: The Bristol News Bulletin, with a dateline of Johnson City, carried important news regarding the progress of Johnson City. “Representatives of the Tennessee Valley Authority from Knoxville and Chattanooga will make a surrey of electricity needs here this week, City Attorney Colin B. McKinney has announced.”

The article continued, “McKinney is chairman of the Upper East Tennessee regional organization which is studying the possibility of getting TVA power for this section.”

“After finishing here, the TVA engineers will conduct similar surveys in other East Tennessee towns, including Rogersville, Morristown, Tazewell and Rutledge.”

The article continued, “Vanek’s election was made by Branch Rickey, general manager of the St. Louis Cardinal chain system.”

The new Cardinal pilot was manager-outfielder for the Greensboro (Pa.) team in the Pennsylvania State League last year. He has a batting average of .336.”

April 6, 1944: The Dilettante Club had recently celebrated their tenth anniversary, according to the Johnson City Press-Chronicle. “The Dilettantes celebrated…..at a meeting Tuesday afternoon at the home of Mrs. J.G. McMurray….with Mrs. Kenneth Scholl joint-hostess.”

“Mrs. Frank Hannah gave a brief history of the club and displayed the scrap book. She said that the Dilettante Club was the first book club in Johnson City, having been organized in April 1934, and of which three charter members are still active, Mesdames John Wiley, William A. Starritt, Jr., and Hannah.”

April 6, 1954: In a captioned photograph, the Johnson City Press-Chronicle informed readers, “Dr. Ruben Parson, head of the geography department at East Tennessee State College, supervises Ruth Williams of Johnson City and Gene English of Flag Pond as they plant yellow poplar seedlings on the college tree farm. The plantings are part of Dr. Parson’s class in resource conservation. Other students of the class are shown in background.”

“Mrs. Dunbar will lead some 27,000 individual WSCS members in churches from Chattanooga to Wytheville, Va.”

April 6, 1971: Readers of the Johnson City Press-Chronicle learned they probably should not put away their winter coats. “Cloudy skies, cool temperatures, rain and light showers along with a high near 55, are forecast for today.”

“And then….AND THEN….the forecast for tonight calls for cloudy skies, unseasonably cold temperature and light snow along with a low of 30!”

“Tomorrow is expected to be cloudy and unseasonably cold again with intermittent snow (no significant accumulation expected), and a high of 48.”