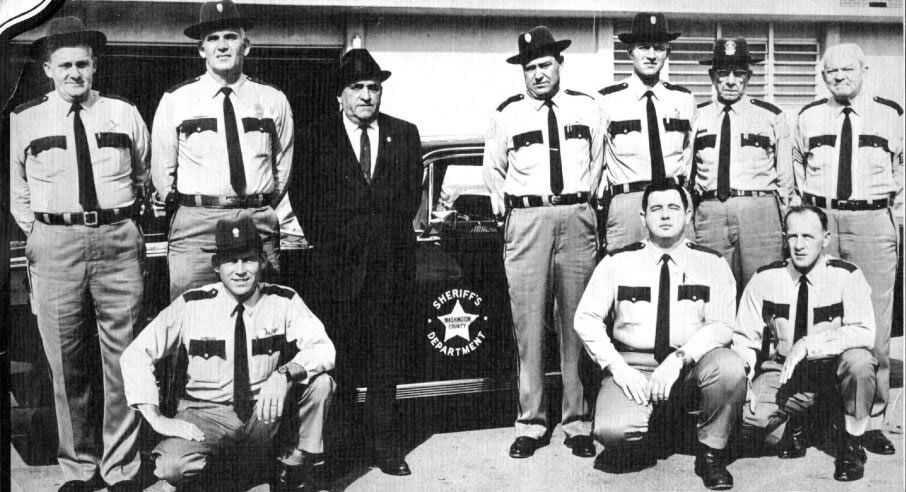 On March 12, 1970, incumbent Washington County Sheriff Uel Hartman announced his candidacy for re-election. Hartman did not win the election. He was beaten by James Seehorn.

April 5, 1867: The East Tennessee Union Flag carried an advertisement for a barber. The advertisement was printed in the form of a very short article. ”Go to the Barber Shop of J.C. Cousins in West end of Court House next to the office of A.C. Collins, Esq., if you want Shaving, Hair-cutting or Hair-dyeing done cheap and in style.”

The East Tennessee Union Flag was published in Jonesborough, which was spelled that way at the time.

“A little boy baby made glad the hearts of Mr. and Mrs. W.B. Harrison by coming to live with them on last Thursday at their residence on Millard street (sic).”

“Strawberries – first of the season – will be served next Tuesday evening by the young Peoples Society of the Baptist Church at Burris & Jackson’s old stand on Main street (sic).”

Backwoods was located in Carter County, and is now known as Ripshin.

Burris & Jackson was a grocer.

April 5, 1911: With a Johnson City dateline, The Bristol Evening News reported on exciting progress in Johnson City. “Prof. S.G. Gilbreath, president of the new East Tennessee Normal here, states that he is delighted with the progress being made on the new Normal. He thinks that school may be opened about October 15.”

There was not a daily newspaper published in Johnson City in 1911. Johnson Citians read The Comet on a weekly basis.

April 5, 1915: The Chattanooga Daily Times, with a Johnson City dateline, reported on the first woman notary in Washington County. “Mrs. Kate Herold, of Johnson City, was elected to the position of notary public Monday at Jonesboro by the county court. Mrs. Herold has the distinction of being the first woman to be elected to this position in Washington county (sic).”

Jonesboro was spelled that way in 1915.

There was not a daily newspaper in Johnson City in 1915. The Comet was published on a weekly basis.

April 5, 1918: The Johnson City Daily Staff reported on a Johnson City physician who had recently entered the military. “Dr. Jno. G. Moss received his commission as captain and left yesterday afternoon on the Memphis Special for Camp Greenleaf, Oglethorpe, Ga., where on April 10th he reports for duty and enters the officers’ medical reserve for a few weeks’ training before being transferred to the scene of active duty.”

More details included, “Dr. Moss is among the patriotic physicians and surgeons who have offered their services from Johnson City. At an early date, Dr. E.T. West expects to receive his commission, and Dr. Henry Cass stands ready to go with the Firth Tennessee. Dr. Moss is one of the excellent and efficient physicians and surgeons who go to make up the medical fraternity in Johnson City, all most proficient in their profession, and patriotic gentlemen doing their bit.”

April 5, 1921: The News-Democrat reported the Johnson City Rotary Club accomplished three things over the past year. “Financed $80,000 hospital; opened up fishing and hunting ground for boys; hired expert to train boys” were the items listed.

The News-Democrat was a newspaper published in Paducah, Kentucky.

There were no newspapers published in Johnson City in 1921.

April 5, 1932: With a dateline of Johnson City and a date of April 4, The Knoxville Journal reported, “Sam Hodge, 47, is in a hospital here with a bullet through his abdomen and Jim (Possum) Blevins is under heavy bond after having several cuts and bruises treated as the result of an altercation between the two near Watauga Flats yesterday afternoon.”

More details revealed, “A preliminary hearing is set for Wednesday involving both men, each having been arrested by the other on charges of felonious assaults. Blevins also made trespass charges against Hodge and two companions. An old grudge is blamed for the trouble.”

There were not any newspapers published in Johnson City in 1932.

April 5, 1942: The Johnson City Press-Chronicle reported details of a recent wedding. “Joe T. Wolfe of Sweetwater, announces the marriage of his niece, Violet Fern Wolfe, to U.G. Trivette, Jr., son of Mr. and Mrs. U.G. Trivette, 413 Highland avenue (sic), March 24, 1942 at 8 p.m., at the First Christian Church. Dr. J.W. Carpenter officiated. The couple was attended by Miss Fern Trivette, sister of the groom, and Jack Long. The bride wore a travel suit of powder blue with navy accessories, and a corsage of roses and sweetpeas. She attended Maryville and State Teachers College. The groom is a graduate of Science Hill High School and attended State Teachers College. He is an employee of the TVA.”

April 5, 1952: “Mrs. D.N. Kellum is now recuperating at the home of her parents, Mr. and Mrs. Carl Rumbly, 1411 Virginia street (sic), following surgery at Swingle Hospital,” according to the Johnson City Press-Chronicle.

April 5, 1971: The Johnson City Press-Chronicle reported, “Former Sheriff Uel Hartman, Telford, who had been a medical patient at Memorial Hospital since March 30, was discharged over the weekend.”

Prior to the opening of the Johnson City Medical Center, Memorial Hospital was the main hospital in Johnson City.