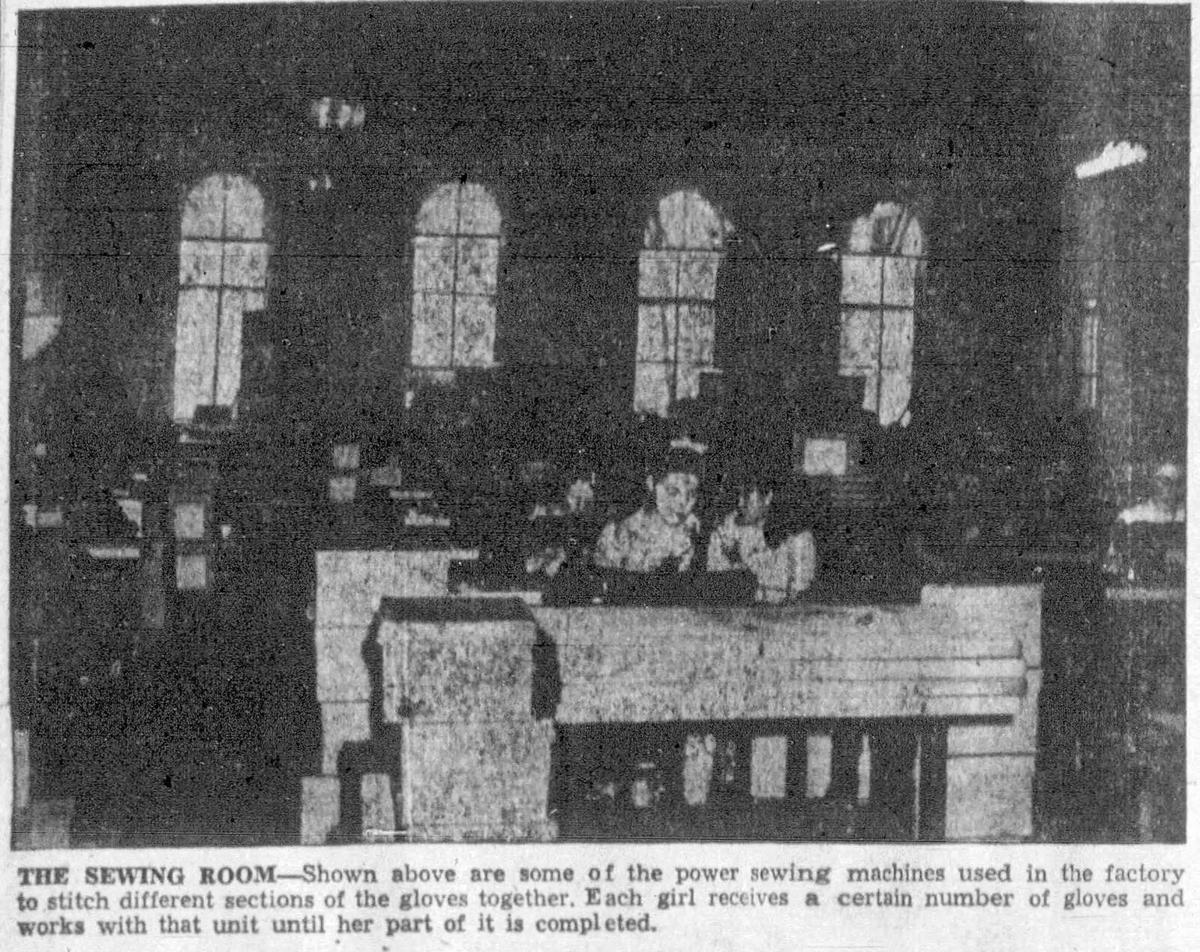 In this photo inside Johnson City's Artcraft Glove Factory in 1944, workers can be seen at their sewing machines.

The Union Flag was a newspaper printed in Jonesborough, which was spelled that way under the masthead. However, it was also spelled as Jonesboro at various points inside the newspaper.

April 2, 1891: The Comet reported, “Another deal was made Monday in Main street (sic) property. F.A. Stratton purchased the corner of Main and Roan Streets (sic) from Mr. Landreth. The price paid was $100 per foot, cash. The property fronts 73 feet on Main street (sic) and is 150 feet deep. Mr. Stratton will erect a building to cover the entire lot, which will run up three or four stories into the air. The plans will be made at once.”

April 2, 1918: A local man had recently been honored, according to the Johnson City Daily Staff. “Mrs. W.P. Harris has been appraised of the honor awarded her son, Lester Harris, who volunteered early in June and went to France where in the French army he rendered fine service. Recently he was honored with the Croix De Guerre conferred for distinguished service and gallantry under fire, the Red Cross contingent performing heroically alongside the fighting men. Harris bears the distinction of being one of the eight of the Columbia University alumni who have won decorations of honor at different times and at different points in the battle field of France.”

The article continued, “While the Americans who officially joined the French and British have subsequent been transferred in the American Expeditionary force in France, Harris is still serving with the French contingent, while at the same time serving as an American in an American unit. It is with a feeling of pride that his friends back home learn of his distinction.”

April 2, 1920: With a byline from Johnson City, The Kingsport Times reported, “Child and family welfare work, industrial relations, public health, charity and correctional service and education will be the subjects to be discussed here next week at the Tennessee Conference of Social Work.”

The article continued, “The conference will be opened at 2 o’clock Sunday afternoon with a mass meeting in the city hall. Owen Lovejoy, president of the National Conference of Social Work, and Governor Roberts will be the speakers. Mr. Lovejoy will speak on ‘Children and Reconstruction’, while the Governor’s address will be entitled ‘The State’s Duty Toward Her Dependents.’”

In conclusion. readers learned, “The conference will be continued through Wednesday afternoon and is expected to be the best ever held in the Stae (sic). Hundreds of visitors from nearly every section of Tennessee are expected.”

There were no newspapers published in Johnson City in 1920.

Apr. 2, 1929: The Evening Star reported on a horrific presumed April Fool’s joke gone badly awry. With a dateline from Johnson City, readers learned, “An April fool’s joke became a gruesome tragedy here last night, when a fireman was killed and two of his comrades injured in answering a false alarm.”

“F.C. Puckett, driver of Engine Co. No. 2 was killed instantly and Assist (sic) Chief George Wilson and Fireman Marion Hale were severely hurt in a collision between their fire truck and an automobile.”

More details revealed, “The fire truck and the automobile came together at a street intersection with terrific impact, the truck turning over twice, crushing Puckett. Wilson was cut on the head and suffered a wrenched back. Hale was knocked unconscious when his head struck the pavement.”

“John Kelly, salesman, driver of the automobile, was badly bruised, but his injury was not considered serious.”

“Puckett tried to avoid hitting the car, but in swerving the big truck caused it to strike the curbing and turn over after glancing off the lighter machine. Puckett’s companions were thrown clear of the wreckage.”

Finally, “An alarm turned in by an unknown party, presumably as a prank already had drawn another engine to the vicinity and a crowd, which witnessed the fatality.”

The news report did not state the location of the incident.

The Evening Star was a newspaper published in Washington, D.C.

April 2, 1931: The Johnson City Staff-News reported to readers, “The American Legion Spring Festival, now going on at the East Main street (sic) show grounds, opposite the Fair Grounds, is attracting good crowds despite the inclement weather of the early part of the week. Vast piles of shavings have been scattered throughout the midway for patrons and protecting them from the mud.”

Apr. 2, 1942: Reporting with a dateline from Elizabethton, Johnson City Press readers learned, “W.B. Marsh, well-known Elizabethton man and Carter county (sic) political figure, was in a hospital here today recovering from an operation which removed one of his legs.”

“A blood clot was responsible for the operation, friends said.”

A retired local physical says that blood clots rarely lead to amputation today, partly because of the availability of clot-dissolving medicines.

April 2, 1953: The Johnson City Press-Chronicle ran an article inviting readers to an Easter sunrise service. “All denominations are invited to participate in a special sunrise service at Boone’s (sic) Creek at 6:30 a.m. Sunday. The service will be held in the auditorium of Boone’s Creek High School.”

April 2, 1966: The Press-Gazette reported on the activities of several Milligan College students.

“Jim Redkey is visiting with his parents, Mr. and Mrs. Charles Redkey, during the spring vacation from Milligan College, Johnson City, Tenn.”

The Press-Gazette was a newspaper published in Hillsboro, Ohio. It is now known as The Times-Gazette.

“The firm, which has been located next to Columbus Powell School for years, started its move Monday.

“Officials of the company said they hope to be in production in the new plant Monday morning.”