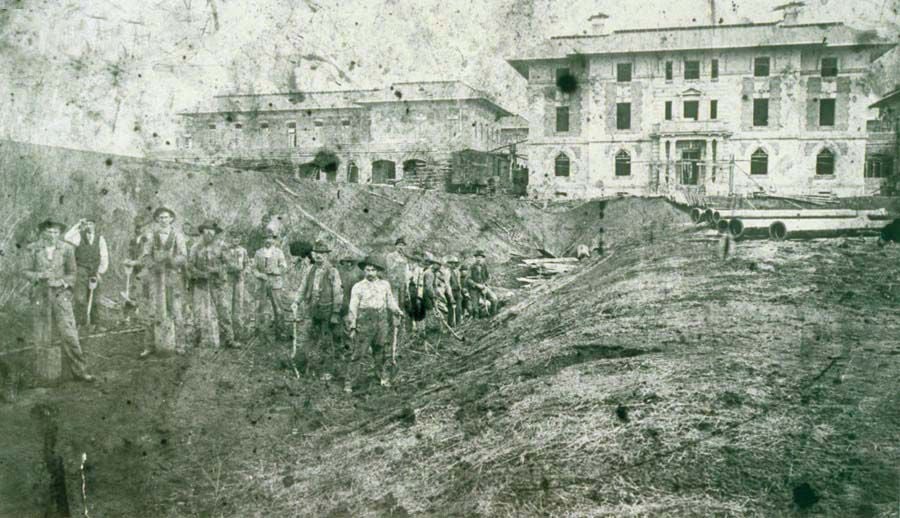 April 17, 1868: The East Tennessee Union Flag printed a recipe for Cottage Pudding. “One pint of flour, two teaspoonfulls (sic) of cream of tartar, a little salt, a piece of butter as large as an egg, one cupfull (sic) of white sugar, one egg, a large teacup of milk with a teaspoonfull of soda, well dissolved in it. Bake a half an hour.” There was not a mention of if the oven was to be warm or hot, but the oven would have been in a wood-burning stove. No mention was made, either, of the best shape and size of pan to bake the Cottage Pudding in, nor the number of servings it would yield.

April 17, 1884: The Salt Lake Herald with a Johnson City dateline reported quite an interesting story regarding a bear. “Jere Sands had a terrible conflict with a bear in Grassy Cave on Saturday. The animal had been trapped, and when Sands came upon the scene, the infuriated beast broke his fetters and was upon the hunter in an instant. The bear seized his left arm in its jaws, his gun dropping from the hand of the mangled limb. In a moment the mountaineer was in the embrace of his antagonist. They fell to the ground and rolling over and over went down the mountain side (sic) thirty yards and dropped off a ledge of rock twelve feet. The bear happened to fall underneath, and during the momentary shock which followed the half dead man managed to draw his knife and plunge it into the animal’s neck, severing the jugular vein.”

“This ended the battle, but Sands was so badly hurt that he could not return home, and was found by a searching party.”

The Salt Lake Herald is no longer in publication.

The Comet was Johnson City’s newspaper in 1884, and it was produced on a weekly basis.April 17, 1900: The Knoxville Sentinel reported, with a Johnson City dateline, “The circuit court of Washington county (sic) met yesterday. Judge H.T. Campbell presided; F.W. Dulaney, clerk, and James Pritchett, sheriff of the county, was court officer. It will hear law cases.”

April 17, 1901: The Lawrence Daily Journal, with a Johnson City dateline reported, “The national soldier’s home board has decided to purchase the Lyle farm of 200 acres and 100 acres adjoining at this place as the site for the proposed soldier’s home. The work of building will begin about July 1.”

The Lawrence Daily Journal was a newspaper published in Lawrence, Kansas. Johnson City did not publish a daily newspaper in 1901. The Comet was published every week.

April 17, 1918: Reporting from Gray, the Johnson City Daily Staff brought sad news to readers. “The five year old son of Dug (sic) Ford’s was found dead on a saw dust pile when he had been playing only a few minutes before he father found him dead. Funeral and burial at Buffalo Ridge Sunday.”

April 17, 1927: The Knoxville News-Sentinel, with a Johnson City dateline, reported, “An election has been called for May 14 on the question of the issuance of $150,000 refund bonds to wipe out Johnson City’s floating debt.”

April 17, 1934: The Johnson City Staff-News brought information about the illnesses and surgeries of several Johnson Citians.

“Mrs. H.L. Moore, West Unaka avenue (sic), is recovering from a serious attack of tonsillitis and her small son, Master Dan Moore, is recuperating from an attack of the measles.”

“Miss Ella Torbett of Johnson City, Route four (sic) has convalesced from an attack of influenza. She was a business visitor in Johnson City Monday.”

April 17, 1940: The Bristol Herald Courier reported a student nurse had been critically injured. With a dateline of Johnson City, and a date of April 16, readers learned, “Miss Margaret Norris, 20-year-old student nurse, remained in a critical condition tonight in a Knoxville hospital the result of severe head injuries suffered Sunday in an automobile-bus collision in that city.”

“Miss Norris is the daughter of the late Sheriff and Mrs. A.C. Norris of Johnson City and the sister of Miss Lucille Norris and Shelor Norris, both of this city.”

There was no mention in the article of where Miss Norris was enrolled in nursing school.

April 17, 1956: The Chattanooga Times reported on a snow in April in Johnson City. “April showers in upper East Tennessee today looked more like something left over from January. In short, it snowed.”

“Shortly after noon today, a sharp drop in temperatures brought a change in rain to heavy snow flurries. At 1:30 p.m., the temperature had dropped to 37 degrees.”

“Johnson City, Erwin, Elizabethton, and Mountain City all reported heavy snow flurries. However, the out-of-season snow didn’t stick to the ground longer than a few minutes.”

“Dear Abby: I am a man who is 45 years old. I am thinking about marrying the girl who keeps house for me, but she is only 15. Do you think I am crazy to think of marrying a girl when I am three times older than she is?” The letter was signed, “Wiley.”

Here is Dear Abby’s reply: “Dear Wiley: Wait another fifteen years. When she is 30 and you are 60, you will be only TWICE as old as she is.”

April 17, 1968: “Never argue with your doctor – he has inside information,” was the quip in the “Today’s Chuckle” column in the Johnson City Press-Chronicle.April 17, 1972: The Johnson City Press-Chronicle reported good news from what could have been a tragic situation. “Two East Tennessee State University students, Lewis Gabehart, 23 and Jerry Hardin, 23, who were thought to be lost in a cave near Milligan College, were found at another cave by Milligan College students early today.”