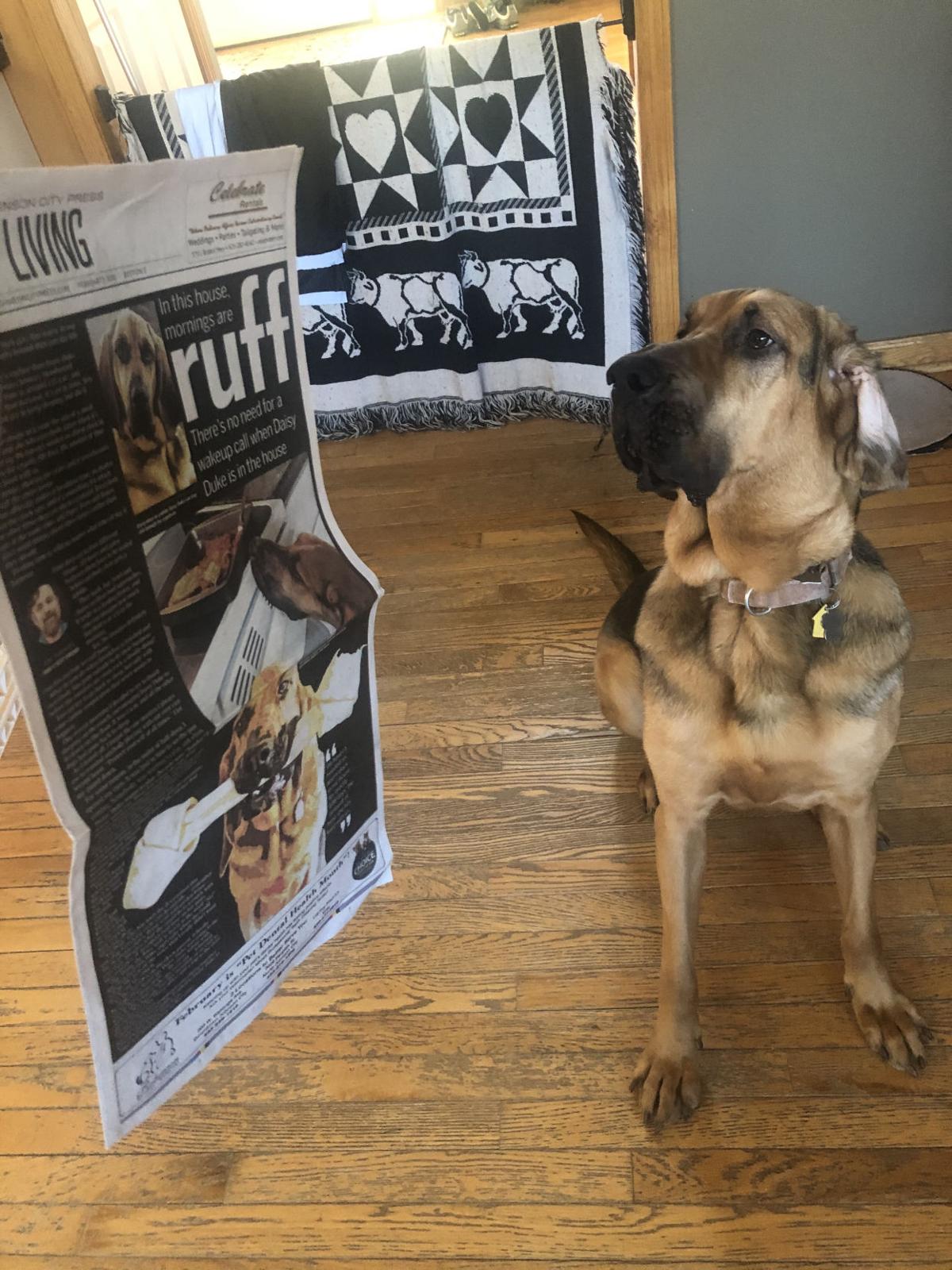 Daisy Duke enjoyed seeing herself in the Johnson City Press. 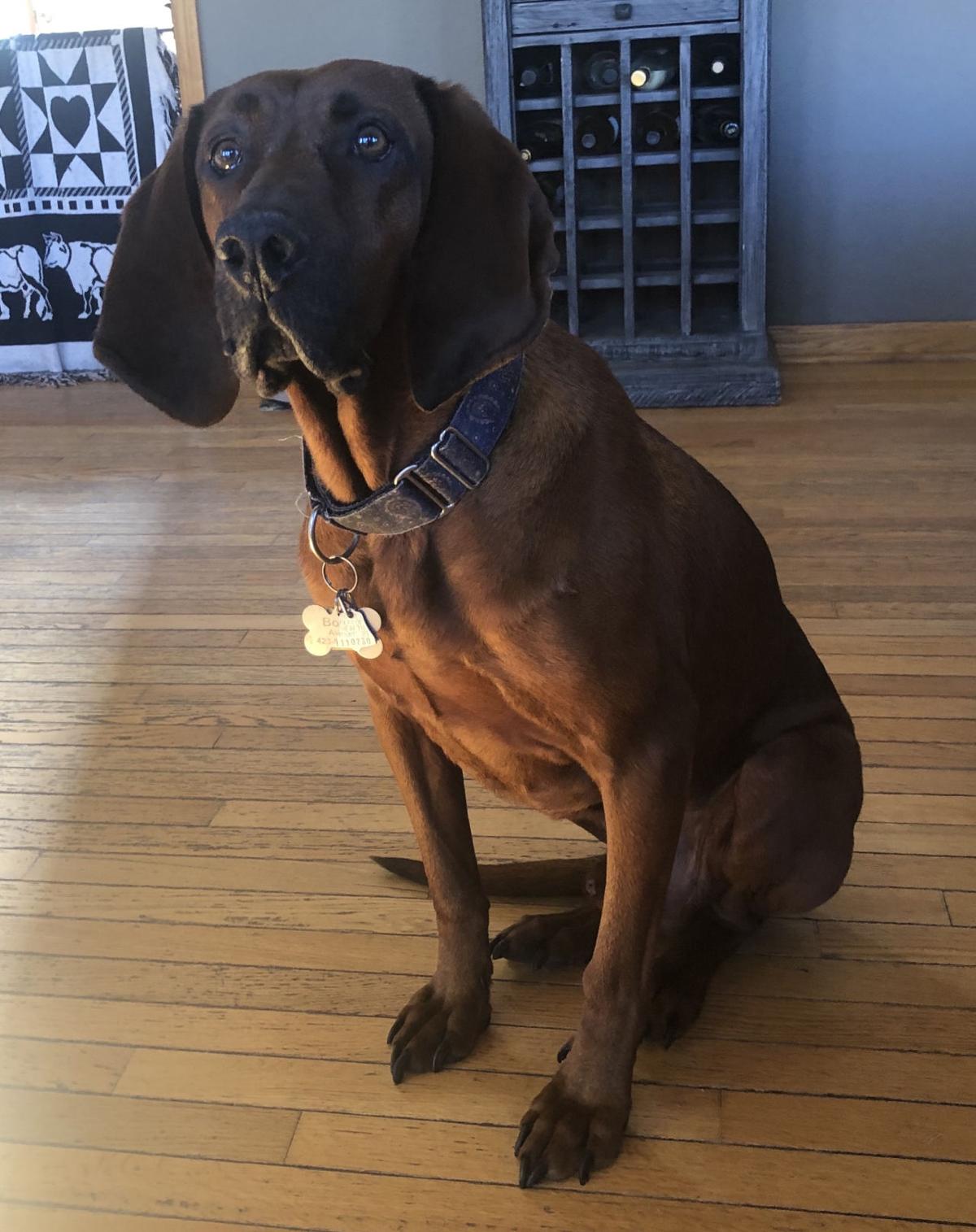 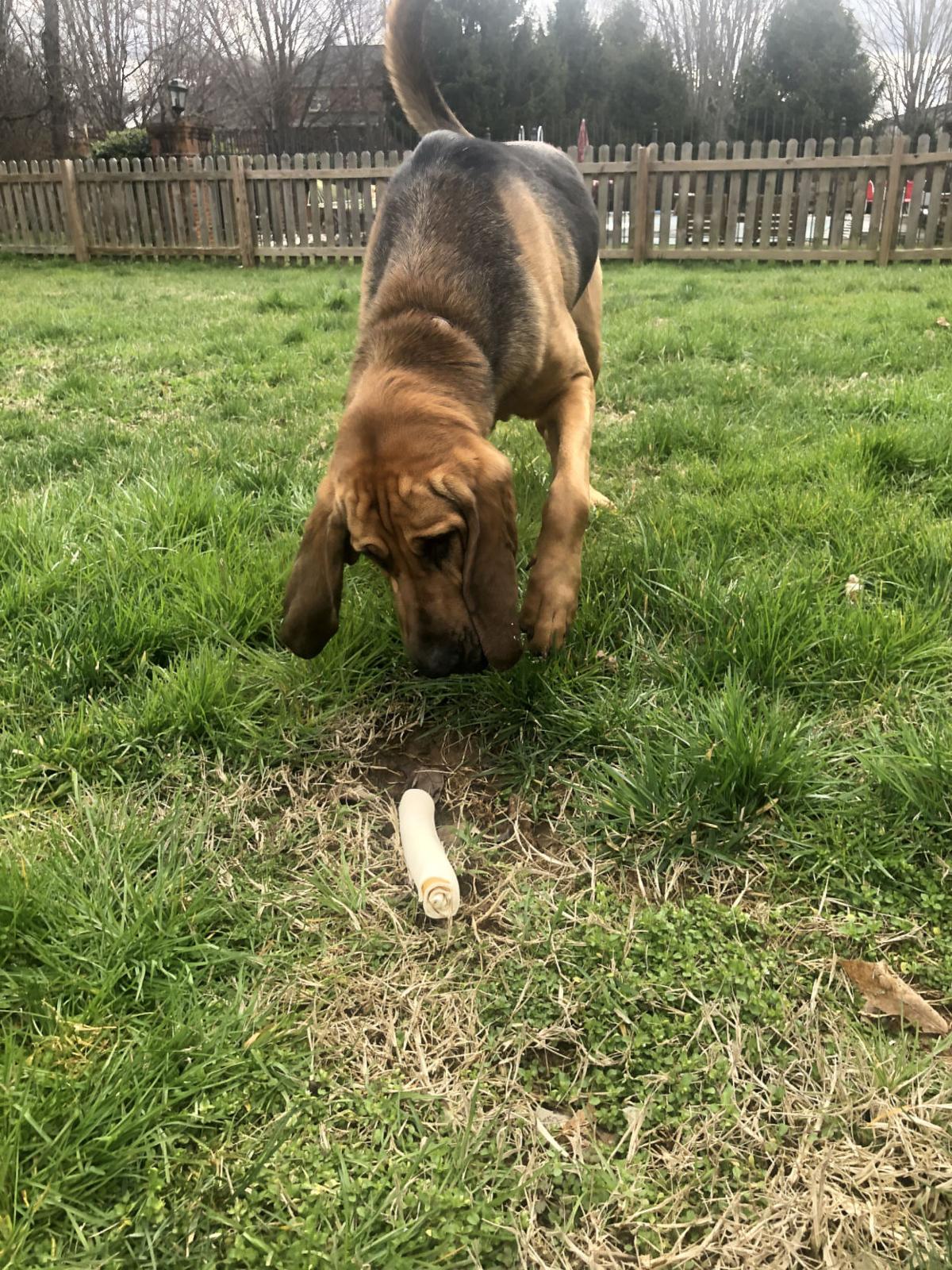 Don't let the new looking chew fool you. It'll be covered in mud before long. 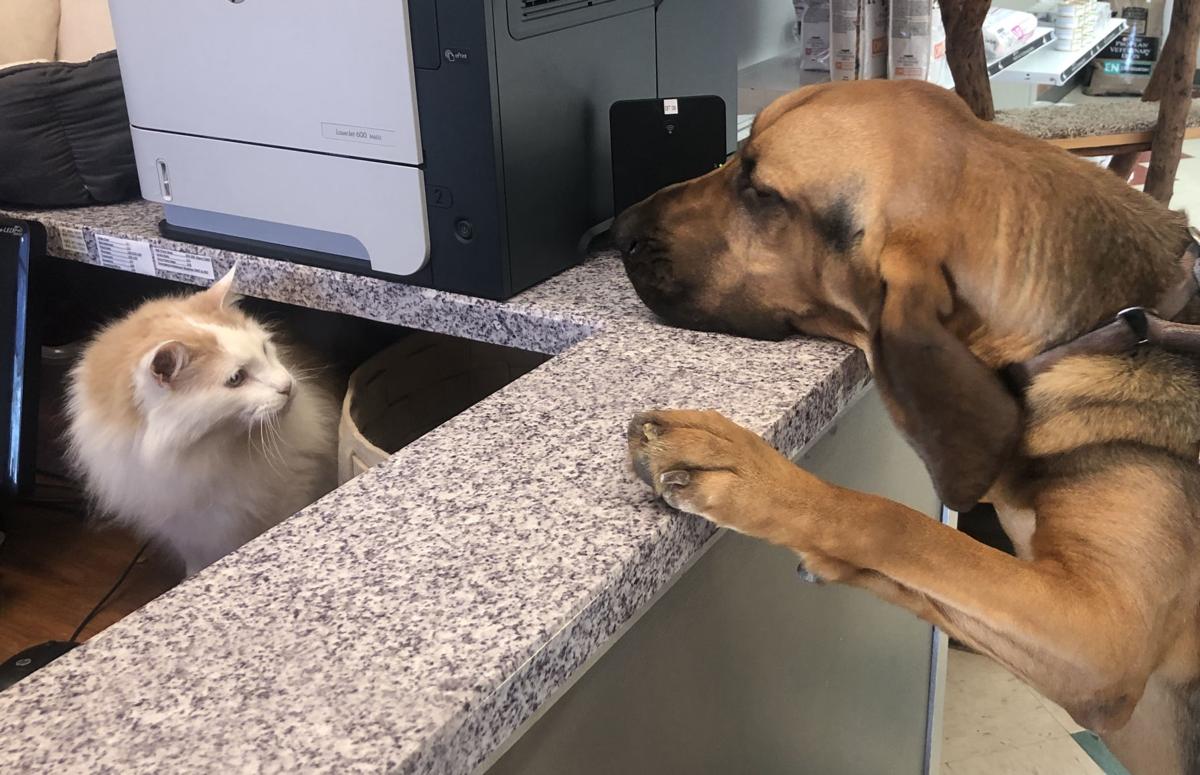 Daisy Duke made a new friend during her visit to the vet. 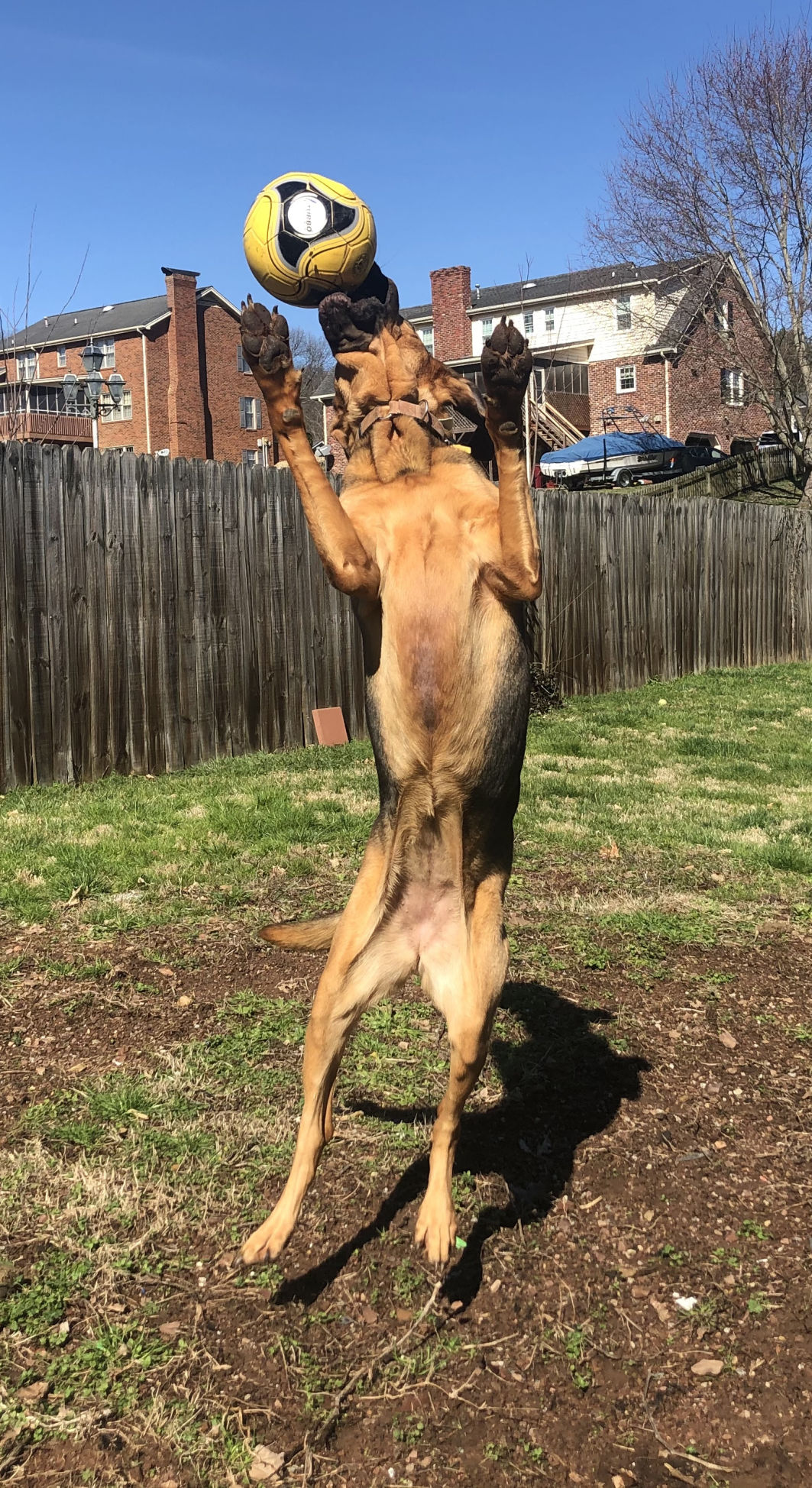 Daisy Duke isn't afraid to leave the ground when it's time to play outside. 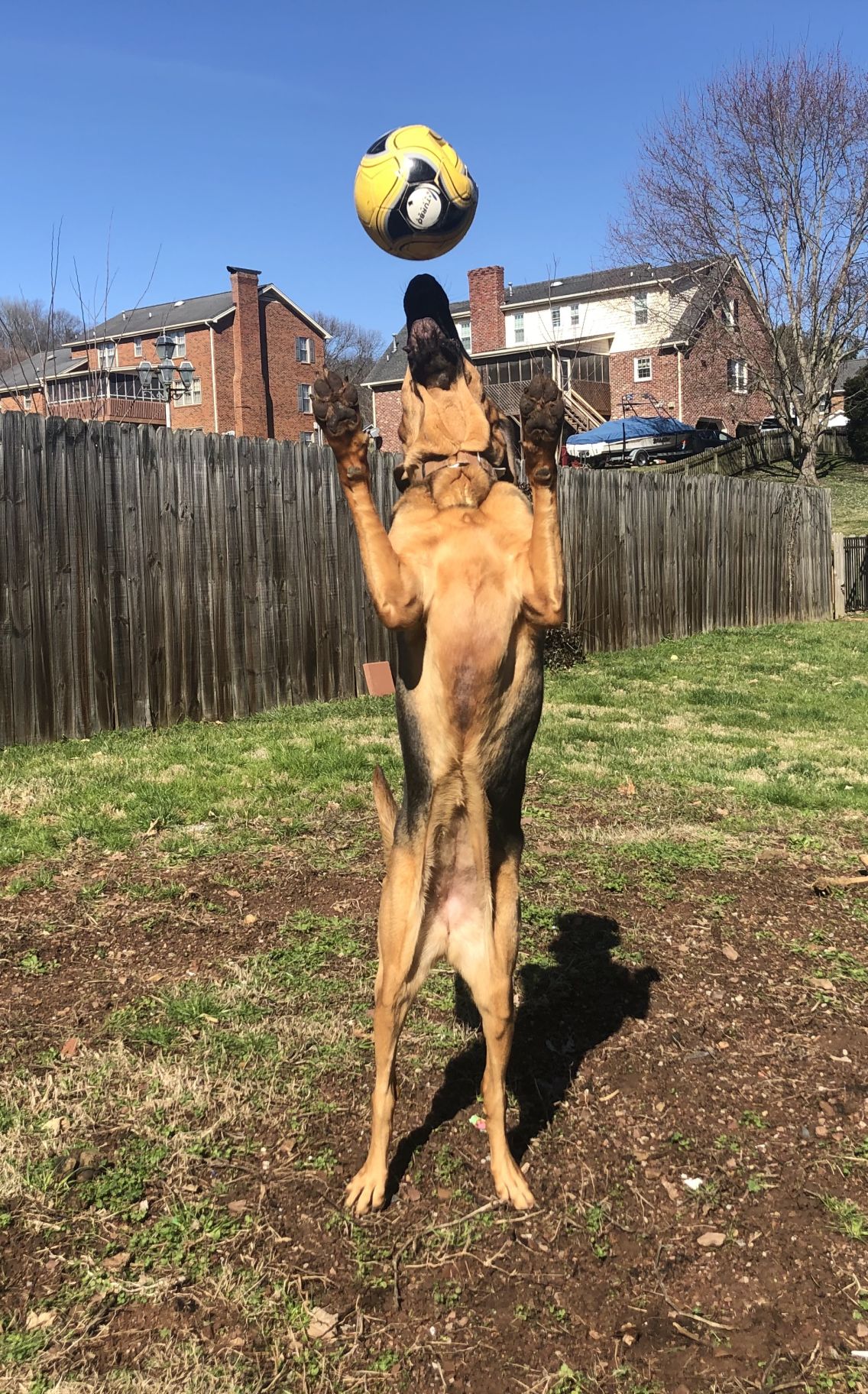 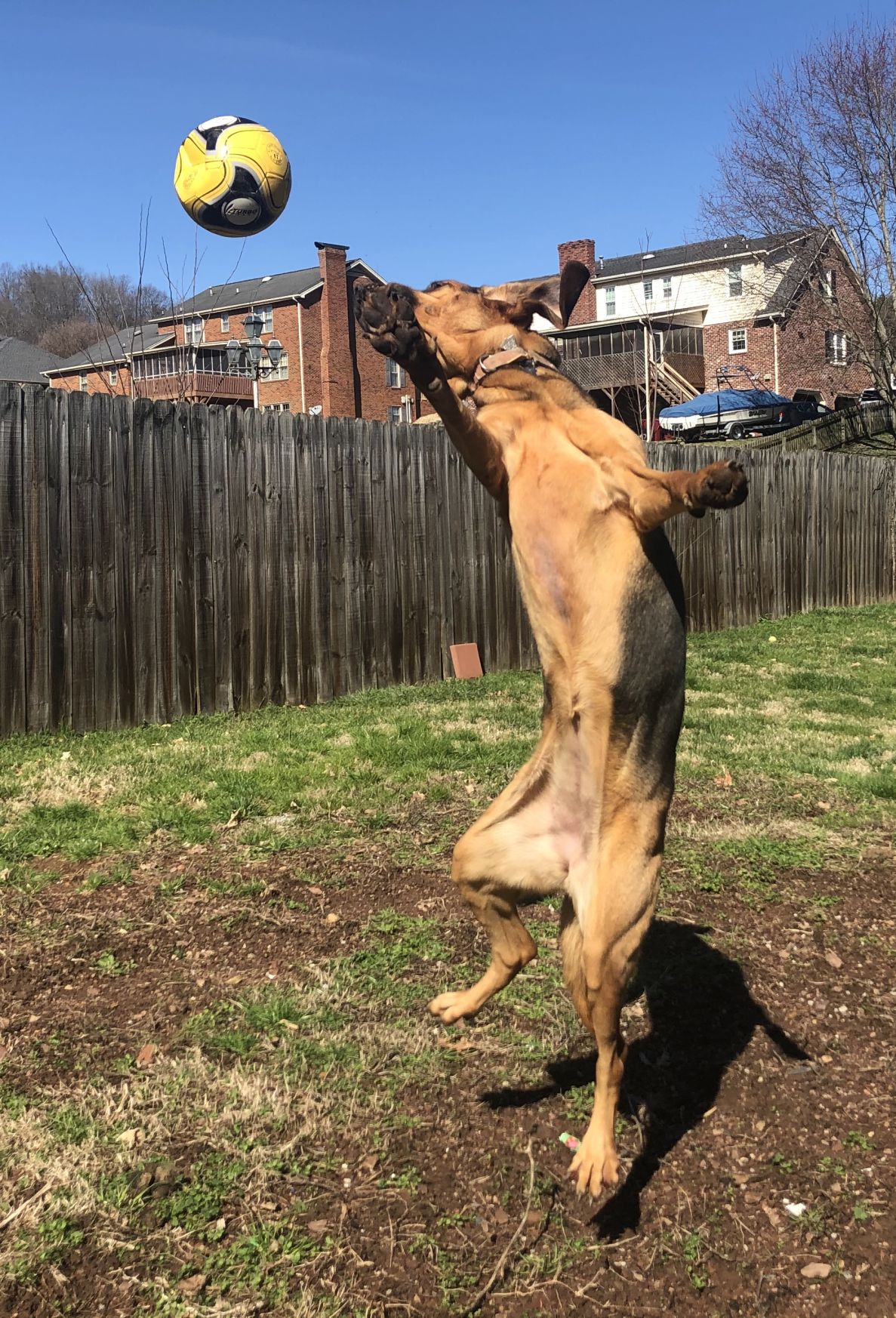 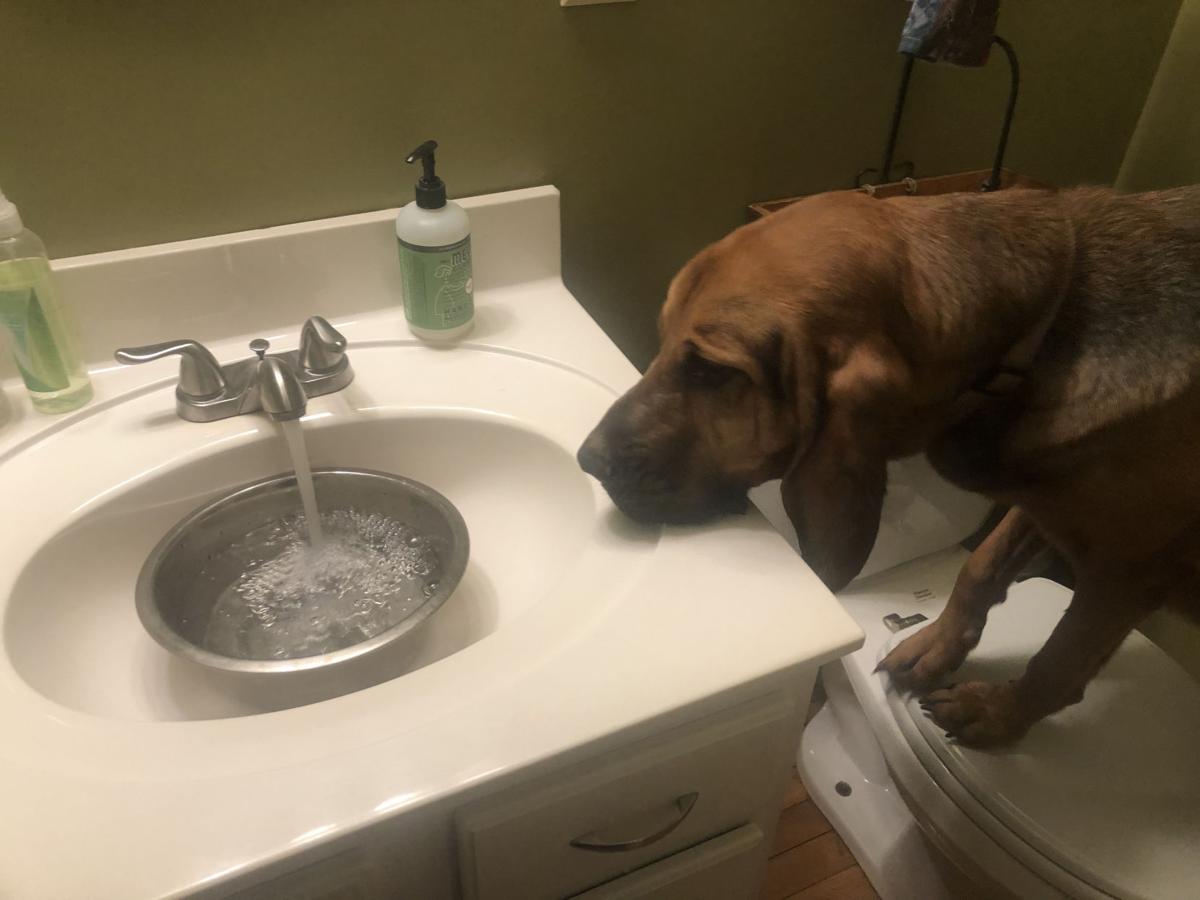 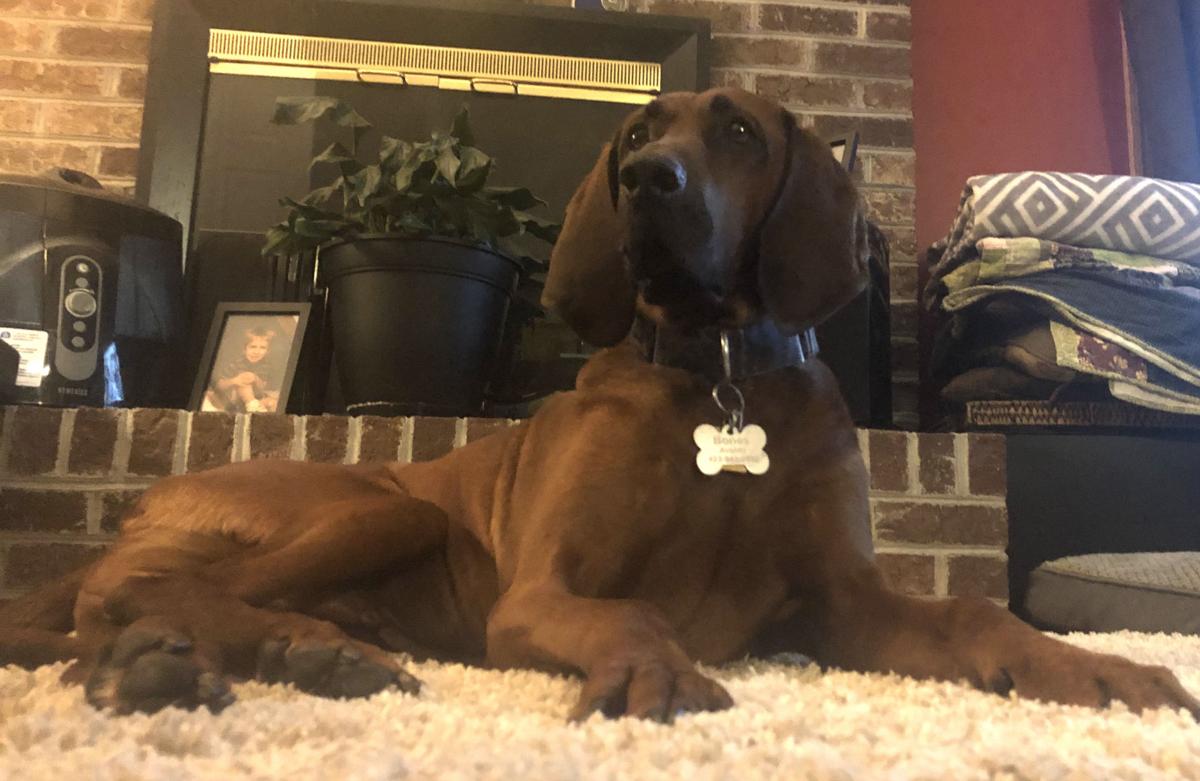 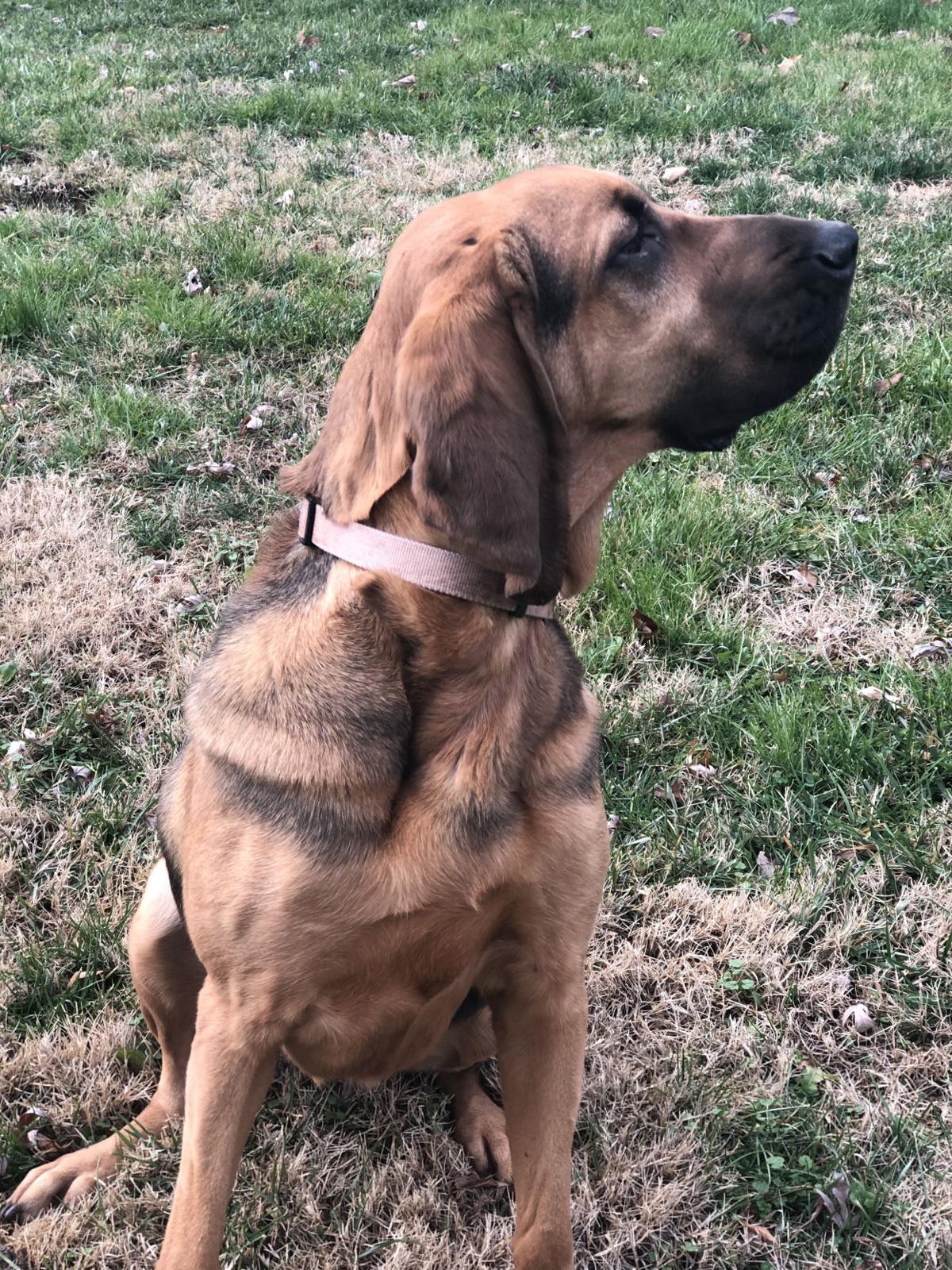 Daisy Duke scouts the yard for the spot for her next hole. 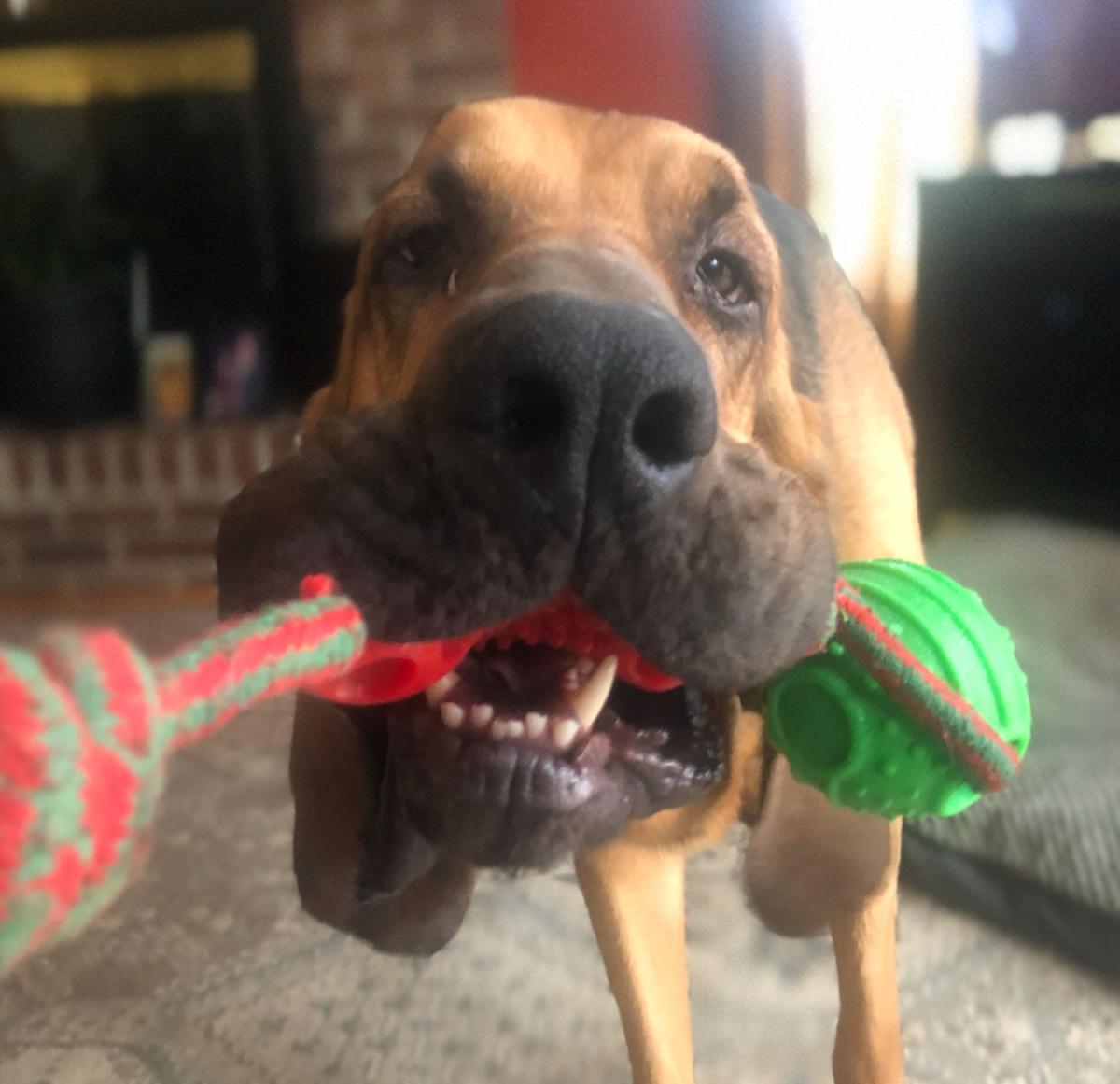 Daisy Duke enjoyed seeing herself in the Johnson City Press.

Don't let the new looking chew fool you. It'll be covered in mud before long.

Daisy Duke made a new friend during her visit to the vet.

Daisy Duke isn't afraid to leave the ground when it's time to play outside.

Daisy Duke scouts the yard for the spot for her next hole.

We can unofficially call Daisy Duke our therapy dog. The longer we have her, the more we need therapy.

They said having a bloodhound would be a fun and wild ride, and it has. She manages to get into more trouble than all our other dogs combined, and the more trouble she gets into, the more fun we have.

Daisy Duke’s penchant for digging holes in our backyard is well documented. The last time we counted, there were 72. Since then, she’s dug many more.

Now she’s putting the holes to good use. Every once in a while, when she’s headed out, we give her a bone or a rawhide chew strip. Even though it sounds like a cliché, she’s started burying the bones in the holes.

How do we know? When she comes back in, she has no bone and a muddy nose.

Unfortunately for Daisy Duke, her step-brother Bones — the aptly named red bone hound — has gotten wise to her shenanigans. He has become an expert excavator.

When Bones goes out, he looks for Daisy Duke’s latest handiwork. On a recent night, he found the freshest of the buried bones. It was late and raining and we were calling him to come in.

He wasn’t budging, though, not with this new prize in his mouth and no dogs to disturb him. There he was, lying in the wet yard, chewing away. You don’t want to mess with this guy when he has a bone. He has a way of making you feel like you might be the next bone.

Bones enjoyed about half-an-hour of alone time with his bone.

When he was done, he came back up the steps. Daisy Duke, already lying down in her crate, suspected something was amiss and began to howl.

It was 11 p.m. and this was a typical night. Our neighbors love us.

At least they didn’t see Daisy Duke redecorating our family room the next day. When an 80-pound bloodhound gets what we call the “heebie-geebees,” look out. She bounces off the couches, off the people sitting on them and off the walls. It’s fun to watch in the rare instance that nobody gets hurt or nothing gets damaged.

During a recent play time, she flew off a couch, pushing it with her legs with such force that it moved five feet. Then she did it again. And again.

By the time she was done, the couch was at a completely different angle and more in our kitchen than in our family room.

Daisy Duke looked proud of herself, like she had planned it all along in an attempt to get more running room in the house. That couch was finally out of the way and she was free to go.

Daisy Duke seems to be able to demolish anything she can get her paws and mouth on. We are reminded of this often at feeding time. She eats in a powder room, removed from her brother and sisters, and if we forget to remove the toilet paper — we forget about once a week — it is immediately destroyed. One time, we remembered about 10 seconds after we closed the door. By the time we re-opened it, it was too late. Paper was everywhere, including in her jowls. Her food hadn’t been touched yet.

She stayed real still, almost like she was thinking we couldn’t see her if she didn’t move. The look on her face was priceless, as if she was saying “What?”

Then she got ahold of a large cardboard box and we decided to sit back and see how much damage she could do. The box didn’t stand a chance. Once she worked her way into a rhythm, she turned into a maniacal shredding machine. Cardboard was flying through the air and as she continued, the pieces got smaller and smaller. She wasn’t just shredding, she was destroying.

She was literally standing on the box with her front paws, ripping off pieces and quickly spitting them out so she could do it again. It was entertaining to watch.

It made us wonder. What could she do to the entire house if we left her alone and unsupervised with full run of the place?

It was a frightening thought, and luckily — fingers crossed — it’s a question we’ll never see answered.