Writer Tanner Cook took this panoramic shot of Rocky Top with his hiking buddy Brent there for perspective. 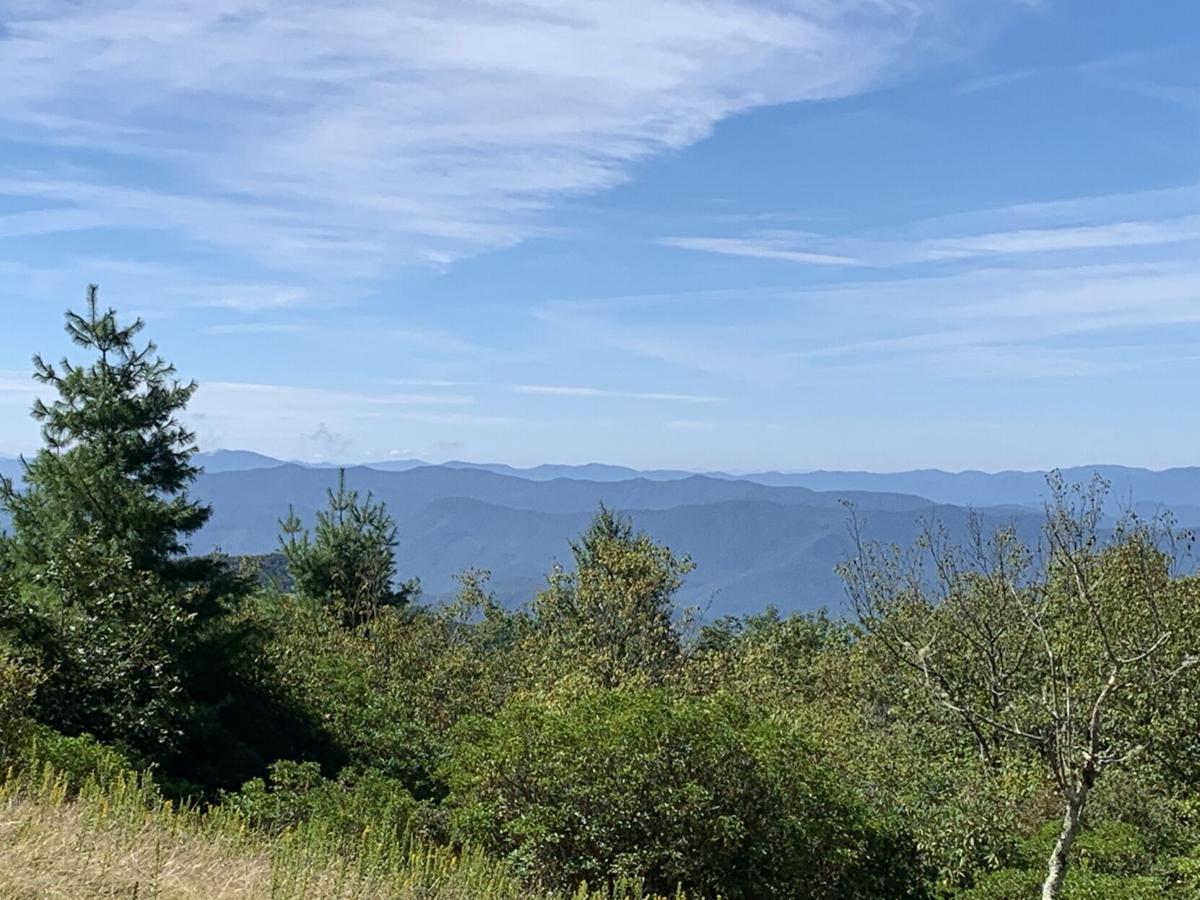 Another perspective from around Rocky Top

Writer Tanner Cook took this panoramic shot of Rocky Top with his hiking buddy Brent there for perspective.

Another perspective from around Rocky Top

Likely location of real ‘Rocky Top’ quite a tough climb

If you go to a Tennessee Volunteers football game anytime during the fall, you undoubtedly know how the song “Rocky Top” goes.

Even though the song is supposed to be a lamentation of a city dweller’s loss of simpler times back in the mountains of East Tennessee, it never actually talks about a specific location. Many locals, however, believe that a peak not far from the place where the song was penned inspired the lyrics.

There is a peak in the Great Smoky Mountains National Park that can be hiked called Rocky Top and it offers spectacular views of both North Carolina and Tennessee.

Recently, my friend and I took a day trip to hike the mountain.

On that beautiful Saturday, there certainly wasn’t any smoggy smoke on Rocky Top.

The hike from Cades Cove going toward Thunderhead Mountain and Rocky Top is more than a 13-mile round trip hike. Plan your day accordingly and be prepared for lots of uphill to start.

The hike is listed as strenuous and has more than 3,500 feet of elevation gain.

When the hike turns onto the Appala- chian Trail a little over five miles in, the walk does get a little bit more steep and more rocky.

Of course, getting into the Smokies is a venture within itself, but the actual starting point of the trail is at the back of the main parking lot and picnic area just before going into Cades Cove.

The Anthony Creek Trailhead begins by following Abrams Creek, and just over 1.7 miles into your journey, the Russell Field Trail will branch off to the right. Hikers should continue straight at this junction and go toward the Bote Mountain Trail.

At 3.5 miles, Anthonys Creek Trail dead-ends into the Bote Mountain Trail. You should continue right toward Rocky Top.

If you choose to go during the beginning summer months, you’ll notice that the rhododendron plants have grown over the trail like a tunnel and are absolutely beautiful when they bloom. There are also plenty of mountain laurels at the Rocky Top sub-peak as well.

The trail has sunken into the ground. Park and naturalist experts believe this is a combination of erosion and animals being herded down from Spence Field for decades before the national park was established.

The bald spot about a mile below Rocky Top is named for James Spence, who built a cabin in the area around 1830. Spence Field is actually not a natural bald, but it was cleared by settlers for the purposes of raising sheep and cattle.

From Spence Field, there are great views of both sides of the Smokies and there is a good view of Fontana Lake on the North Carolina side.

From Spence Field, Rocky Top and the other two summits of Thunderhead Mountain are not far, but there is a steep, 550-foot incline to reach the first peak.

Once upon Rocky Top, though, you’ll see that the peak is about a 25-yard outcropping filled with mostly — you guessed it — rocks.

No wonder people had to get their corn from a jar, and we did not come across a moonshine still on the way up.

If you choose to hike another three-tenths of a mile, you can reach the Thunderhead Mountain peak, which stands at over 5,500 feet and get a good side view of Clingmans Dome back to the east, which is the highest peak in the state.

The legend goes that on a perfectly clear day, you can see all the way to Knoxville from Rocky Top, but my friend and I were not able to see the Marble City that day. We were able to see places like Townsend, Maryville and Fontana Lake.

Take a few moments and enjoy the gorgeous panoramic views of the surrounding landscape and take plenty of pictures. After all, there ain’t no telephone bills on Rocky Top.

A HISTORY BEHIND THE SONG

Felice and Boudleaux Bryant penned the popular tune at the Gatlinburg Inn in 1967 as part of a project of slow-tempo songs for Archie Campbell and Chet Atkins.

According to an article in the Saturday Evening Post, the fast-tempo song took about 10 minutes to write and was meant to serve as a diversion for them. It was originally a B-side song.

The song was first recorded by the Osborne Brothers in that same year and reached No. 33 in the U.S. Country music charts.

The song did not achieve mass popularity until the 1970s when Lynn Anderson recorded the song and it reached No. 17 in the Billboard Country Top 100.

In 1972, Tennessee’s “Pride of the Southland” Marching Band first played the song as part of one of its drills; the idea and arrangement being primarily the work of band arranger Barry MacDonald.

The song was deemed popular enough to be played at a halftime country music show by guest saxophone soloist Boots Randolph at a game in Knoxville against Alabama on Oct. 21, 1972, gaining fans’ attention. Randolph reprised his jazzy “Rocky Top” solo when Tennessee played LSU on New Year’s Eve 1972 in the Astro-Bluebonnet Bowl at the Houston Astrodome. UT recognized the song’s appeal and the band started playing “Rocky Top” at every game.

Longtime band director W.J. Julian stated that if “Rocky Top” was ever not played, then there would be a mutiny among Vol fans, reflecting the song’s deep-rooted foundation in UT sports.

The song was officially adopted as the fifth state song in 1982.

In a 1973 edition of Alumnus magazine, he claimed he “swiped it from Vanderbilt — who got it from Yale’s ‘Down the Field’ ”