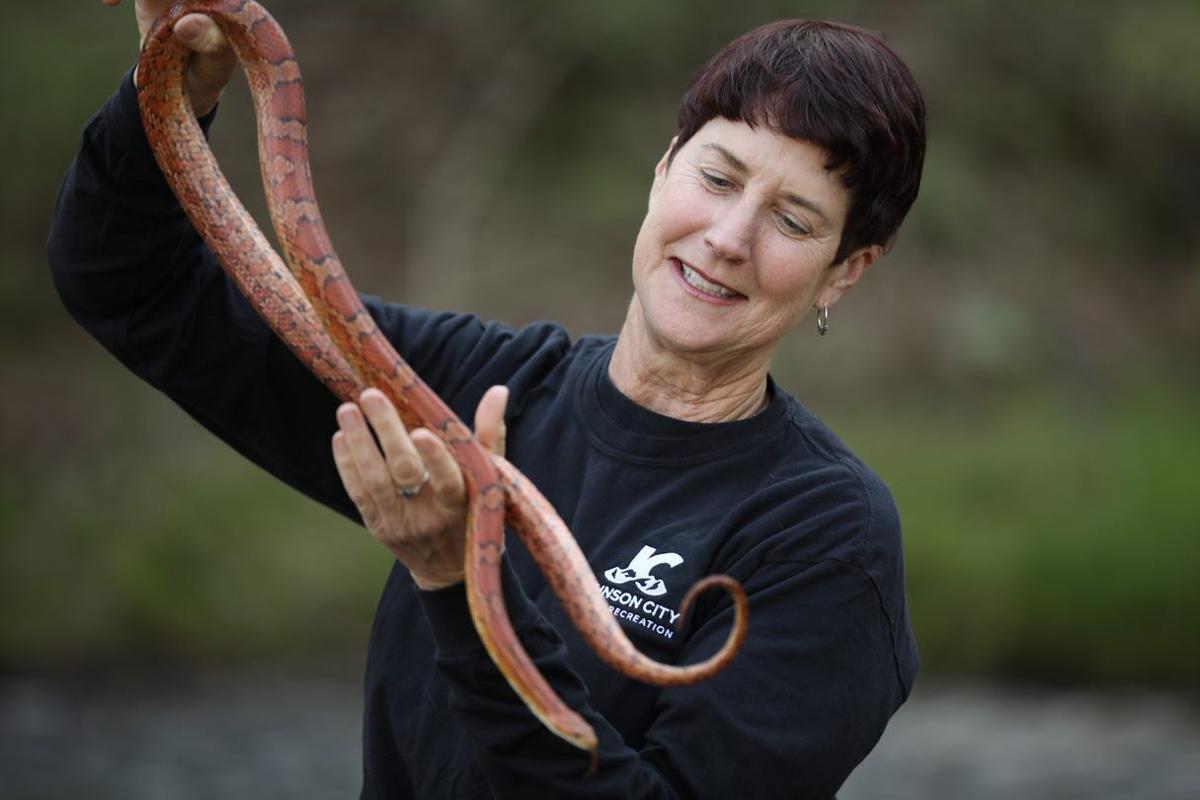 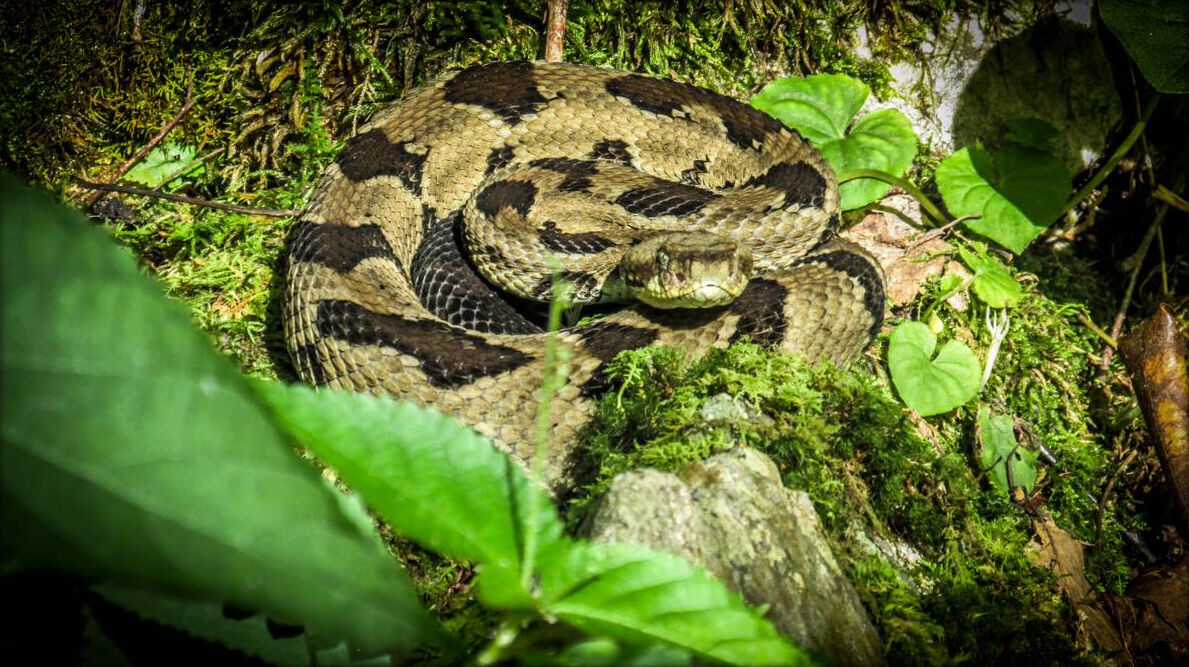 A rare timber rattler coiled up on the trail 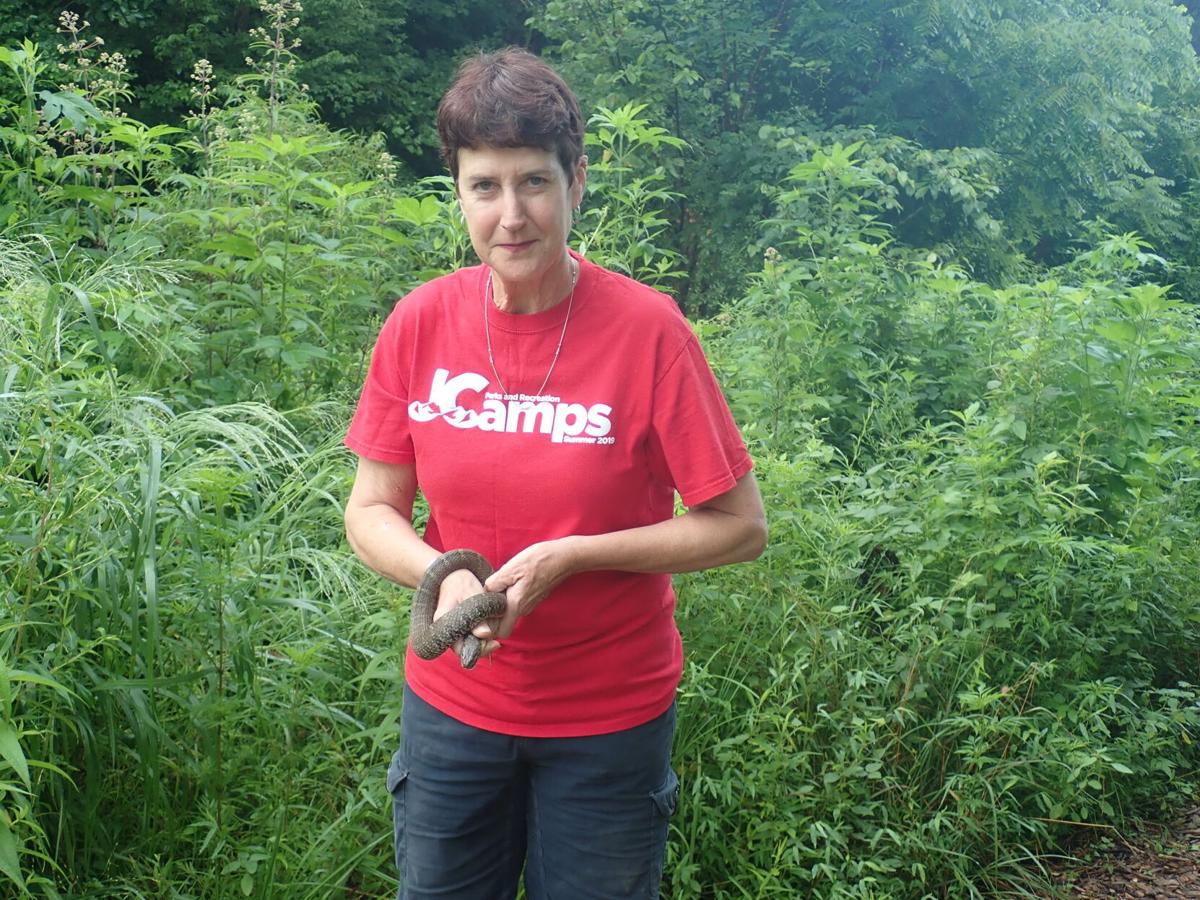 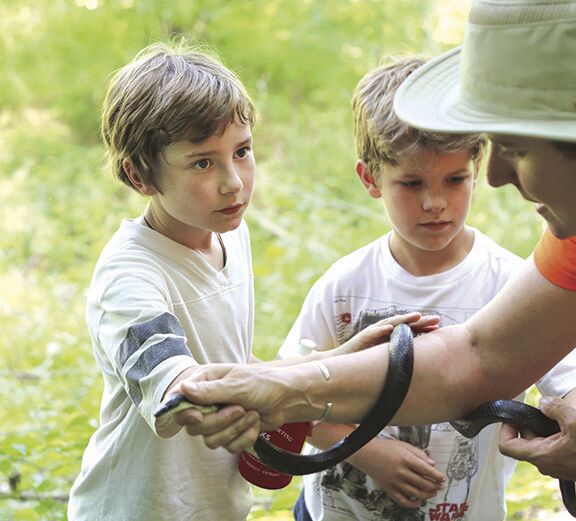 A rare timber rattler coiled up on the trail

The fear of snakes is one of the most common phobias in humans. A simple sighting seems to be something that most of us inherently dread. Combine this apprehension while hiking in the woods, and a stick lying across the trail can mistakenly send our brains into defense mode.

Snakes even deter many people from getting out and exploring our beautiful forests altogether, especially in the summer months. We often cast them as the villains of the trail, but the truth is that our slithery friends get a bad rap.

As with most things regarding the outdoors in general, skills and knowledge allow us to safely explore. So, let’s debunk the myths, and not let snakes discourage us from hiking!

Most snakes in our region are harmless, and non- venomous. Yes, the term is “venomous,” not “poisonous.” Venomous organisms inject toxins through biting or stinging, while poisonous organisms’ toxins are ingested. I learned this little tidbit from the get-go in my interview with Connie Deegan, the city of Johnson City’s Nature Programs Coordinator. Deegan is also a herpetologist — a specialist in the study of reptiles and amphibians. She recently was honored as Conservation Educator of the Year at the Tennessee Wildlife Federation’s 56th Annual Conservation Achievement Awards.

“In our region we only have two types of venomous snakes,” said Deegan. “We have copperheads and the timber rattler. Both rely on camouflage rather than retreating as other species may do when they know a large animal is approaching. If hikers are off trail or using hands on tough terrain, this can pose a problem since an animal that has venom has little need to retreat and may not be seen. But bites are very rare.”

Even a sighting of a venomous snake is extremely rare. Yes, you may occasionally see a harmless black snake, but in all my years of hiking with thousands of miles logged in the forest, I have only witnessed three timber rattlers.

Deegan has the same sentiment. “I’m constantly looking for snakes,” she said. “But, in all the hundreds of snakes I have seen, I’ve only come across six venomous snakes. People really need to get this into perspective. They are real, and they are out there, but they are very secretive and do not generally populate heavily used human areas or trails. I know people who will not go into the woods because of an unrealistic snake fear. It’s such a shame.”

The Centers for Disease Control reports that less than five deaths per year in the United States are attributed to venomous snakes. You are much more likely to get struck by lightning or die of an insect sting.

Even though an encounter with a venomous snake is extremely rare, this doesn’t mean you shouldn’t take a few precautions.

Be extra aware while hiking through rocky areas, as Deegan clarified that copperheads and timber rattlers are closely related and live in the same habitat—often in rock-strewn areas, cliffs, or inside the crevices of boulders.

“They often den up together in the winter,” she explained. “Each spring, you may find concentrations of them as they remain around a den area, getting oriented and waiting for temps to come up before dispersing into the local area for the summer. These areas are often remote and not in a typical hiker’s path of travel, though there are exceptions.”

Other tips for avoiding encounters, especially when hiking off-trail:

• Do not hike with earphones, as timber rattlers will usually give you an audible warning.

• Step on top of fallen trees or bigger rocks instead of immediately over them so you can see where your foot is landing.

• If you are scrambling over rocks and using handholds, look before you grasp.

• Hike in over-the-ankle boots, especially if off-trail in the summer months.

Deegan added, “One thing that I always do when hiking is constantly scan down the trail. I look well ahead. I am very careful when off-trail, when my sight lines are more complicated.”

WHAT TO DO IF YOU CROSS PATHS WITH A SNAKE

Even if you’ve done everything possible to avoid an encounter, if you hike long enough, you might still cross paths with a venomous snake. Again, a rattler coiled up on the trail has happened to me only one time in numerous years of trekking, but it is possible.

Deegan recommends immediately stopping and slowly backing away, while inspecting your surroundings. “When I see a snake on the trail, I do a scan and look for other snakes. This is rarely a concern, but conceivably, if there is one, there may be another.”

“If there is a snake on the trail, drop back twenty feet or so and go around, or if that’s not possible, turn around and hike another trail. People get into trouble when they start messing with the animal, trying to move it,” she explained.

Also warn any oncoming hikers of the snake.

WHAT TO DO IF BITTEN

In the rare case of getting bitten by a venomous snake, Deegan gives some solid advice:

• 911 is your best friend, if you have cell phone service.

• No need to take a picture or try to catch the snake. The anti-venom is the same for both species in our area.

• Most bites occur below the knee, but if not, remove any jewelry if necessary for anticipated swelling.

• Keep the bite area below the heart. Don’t go running down the mountain. Stay calm.

• No tourniquets! That just concentrates the venom in a smaller area, causing more damage.

• No aspirin. That will thin the blood and spread the venom faster.

• Do not cut and suck out venom. Venom is unloaded well below the surface of the skin and it does not work.

• There is no point in carrying a snake bite kit. They do not work.

As with all creatures in the forest, simply give them space. More importantly, never kill a snake. You are a visitor in their habitat. Respect them, and in the vast majority of cases, we can peacefully coexist with them. Our fear of snakes is entirely unfounded, and it shouldn’t stop us from exploring the outdoors.

“Killing ANY snake is illegal,” says Deegan. “People have allowed themselves to dislike certain animals for a long, long time—snakes, bats, spiders, sharks, etc. As we reevaluate our place in the natural world, I sense a slow movement in the direction of understanding that it is all connected and tolerances are changing. Plants and animals have evolved together, and anything that is here is tied into a very complex web that can damage many species if unraveled. People need to understand that they are part of the web; not separate.”