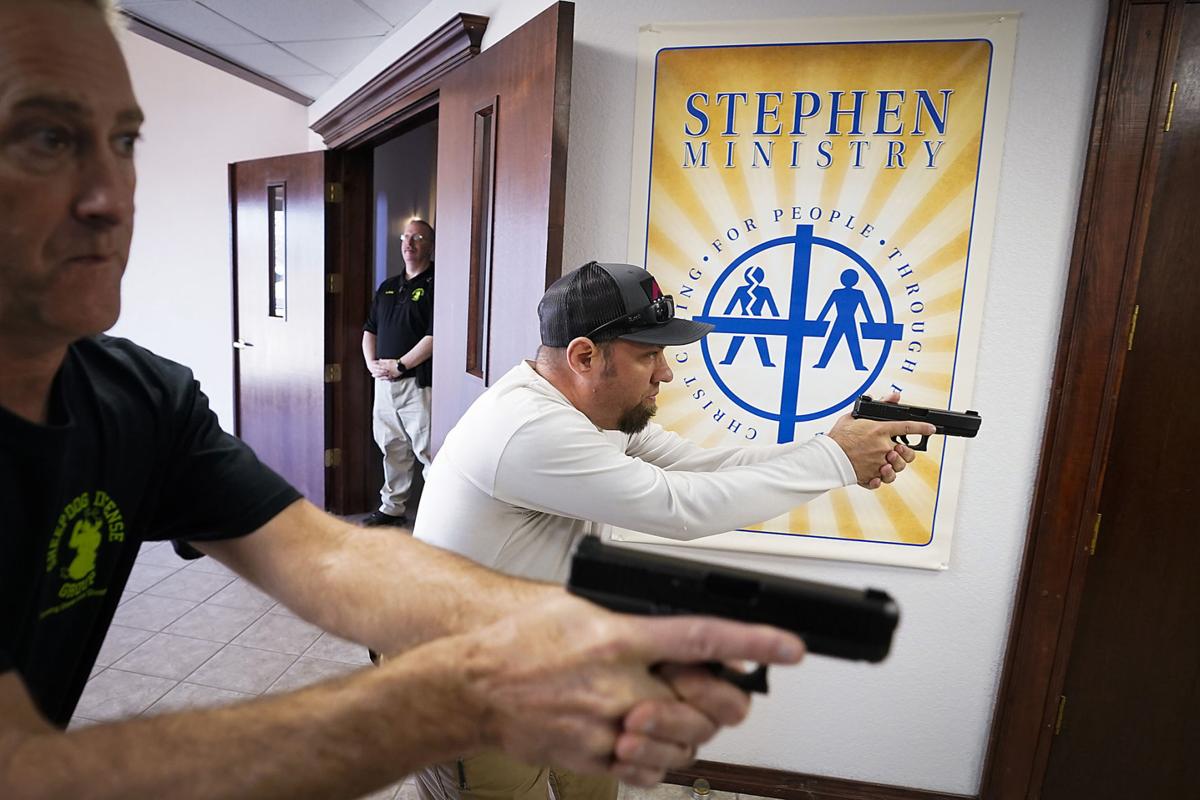 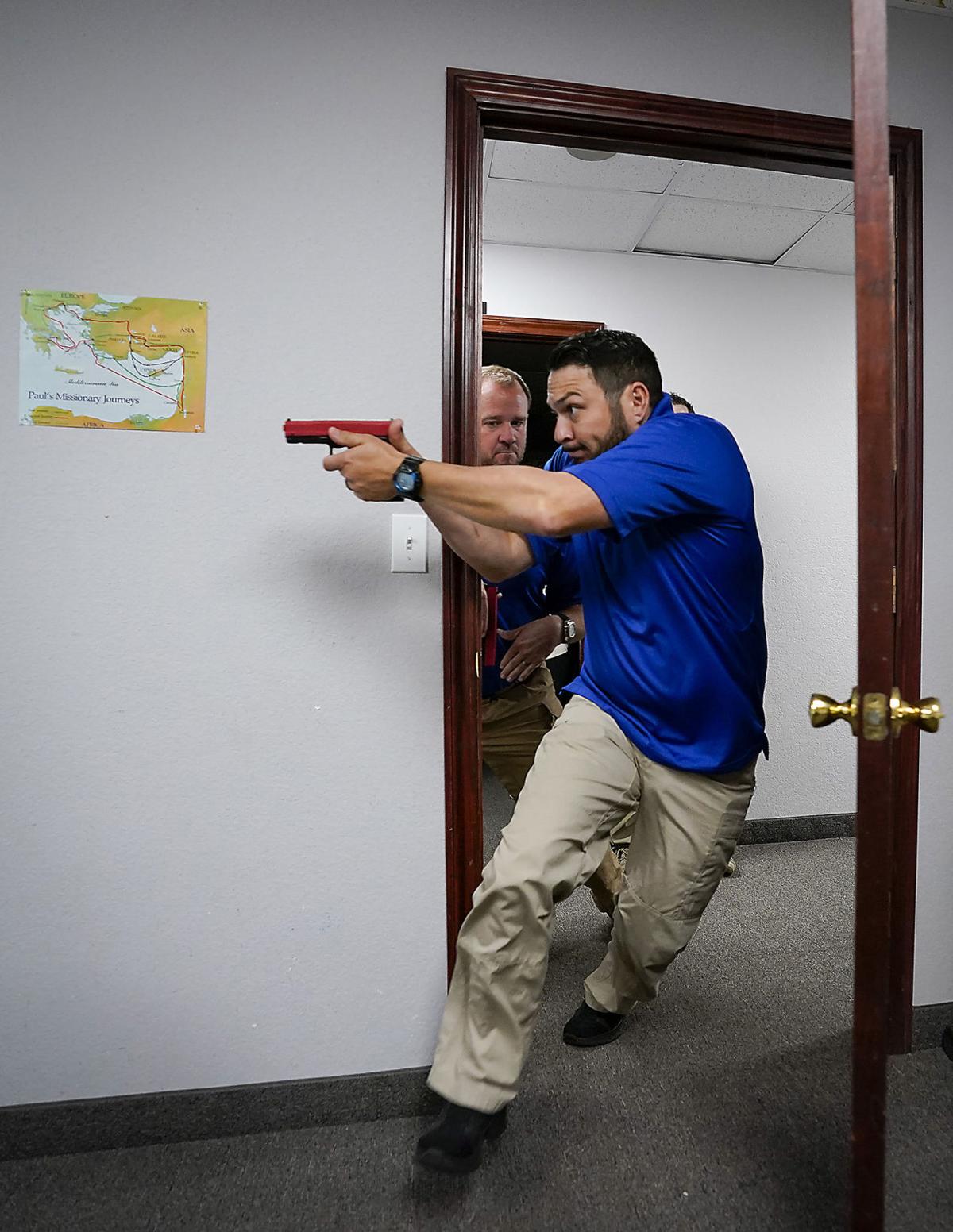 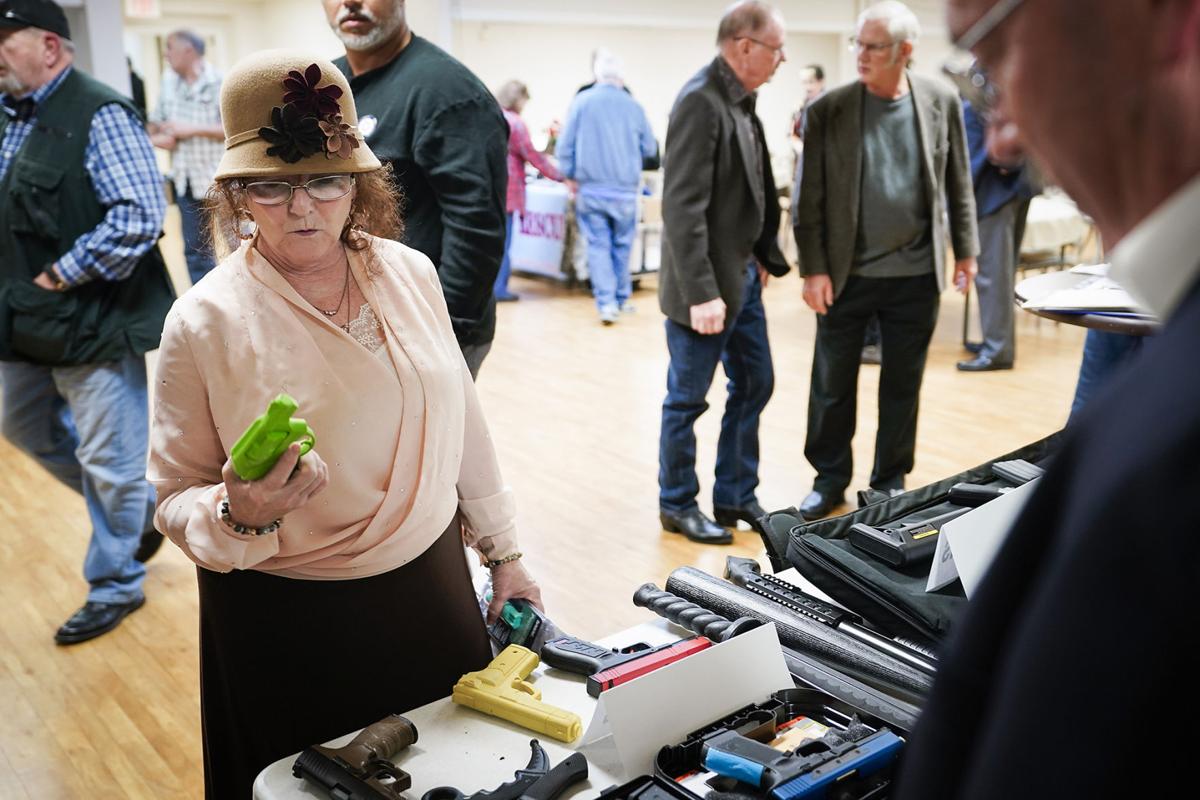 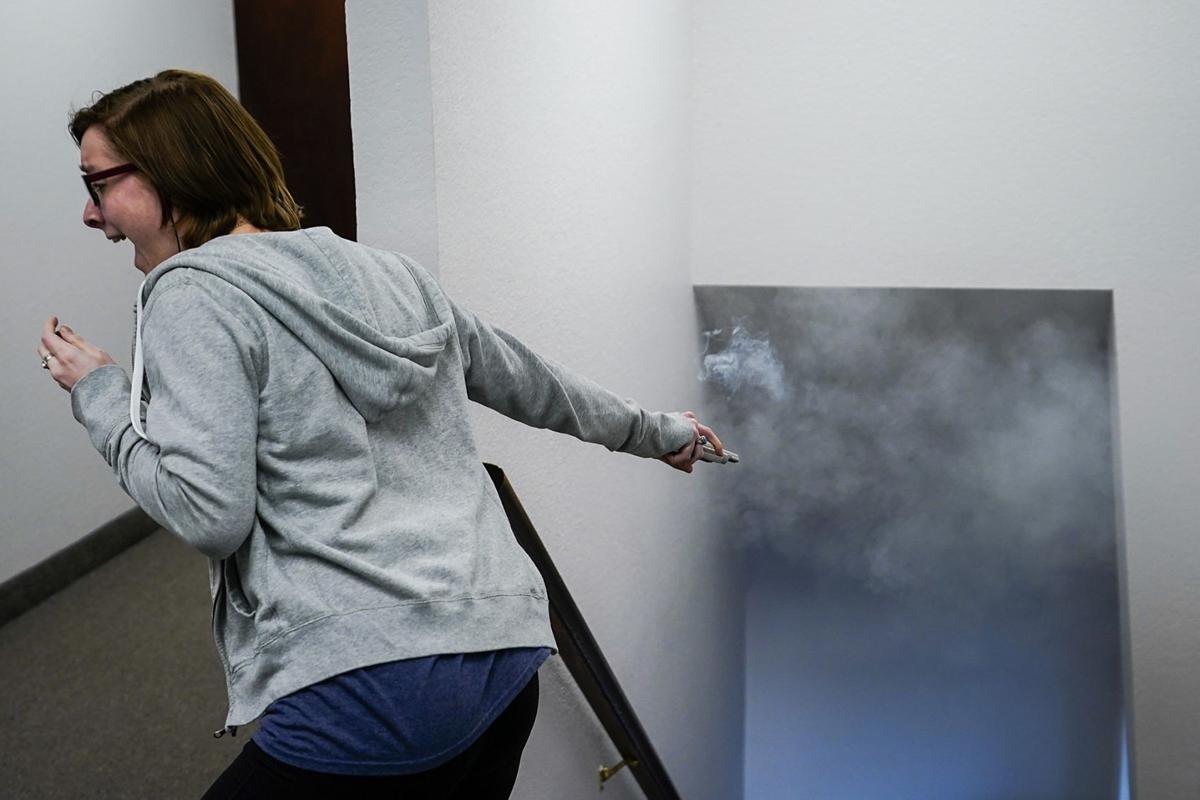 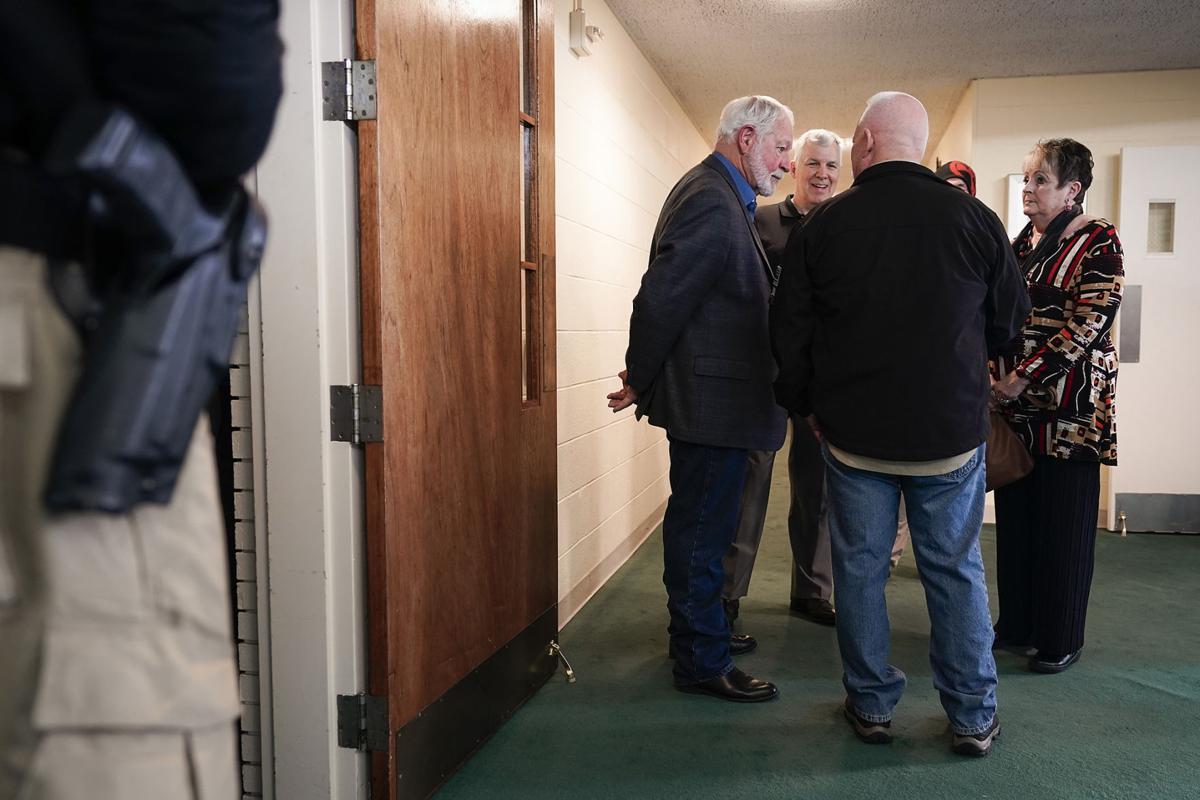 A member of the event security team stands at the doorway to the sanctuary at North Pointe Baptist Church as, from left, Jack Wilson, Mike Swihart, Greg Stevens and Cheryl Linam chat in the lobby during a church safety seminar on January 26, 2020, in Hurst, Texas. (Smiley N. Pool/Dallas Morning News/TNS)

A member of the event security team stands at the doorway to the sanctuary at North Pointe Baptist Church as, from left, Jack Wilson, Mike Swihart, Greg Stevens and Cheryl Linam chat in the lobby during a church safety seminar on January 26, 2020, in Hurst, Texas. (Smiley N. Pool/Dallas Morning News/TNS)

HURST, Texas — Beneath the Christmas lights still hanging in the church's fellowship room, Jack Mills pointed a Glock handgun at his enemy's chest and pulled the trigger.

A loud crack rang out as a shell casing flew from the weapon, but the man facing the gunfire didn't fall. Instead a red light on his high-tech vest began blinking, signaling a hit from the laser in Mills' gun.

A U.S. Air Force veteran, Mills began designing the equipment a year ago to help armed churchgoers learn how to confront a gunman. Shooting a paper target is one thing, Mills said. Firing at a real person is another.

"If you haven't shot somebody in the face, how do you know you can?" he said.

Mills is part of a growing cottage industry in Texas that uses police-like tactics to train churchgoers who fear the next attack could target their house of worship.

Requests for help spike after each tragedy, businesses said. The most recent came in December, when a man opened fire during Sunday service at a White Settlement church and killed two worshippers, before he was fatally shot by an armed congregant.

There's no official count of how many congregation members pack heat in Texas churches. But security businesses said the number is growing thanks to recent changes by the Legislature that make it easier for worshippers to carry guns in church and form teams of armed protectors.

With few industry standards, however, the training offered in Texas runs the gamut from active shooter drills, to programs that demand congregants pass a psychological evaluation and train for hours in life-like scenarios.

One Texas firm has a trainer walk the church halls shooting blanks, so parishioners learn what approaching gunfire sounds like in their own sanctuary.

"What's driving it is an awareness," said Carl Chinn, president of the national Faith Based Security Network. "We were under some illusion that because we had a cross on the roof and a name over the door that we were somehow immune from these kinds of attacks."

Still, congregations grapple with whether to welcome guns in the door. Just under half of 1,000 Protestant pastors nationwide reported arming their members, according to a survey released in January by Lifeway Research.

Roughly 6% of the pastors said they hire police or armed security during services, a step that can be out of reach for smaller churches that don't have the funding.

Some critics warn that letting congregants carry guns without any training could lead to catastrophe if a firefight erupts in a crowded church. It can be a delicate balance stationing armed congregants at the church doors, while still maintaining an atmosphere inviting to newcomers.

"The gun is a false god as it gives the illusion of safety," said the Rev. Deanna Hollas, the Dallas-based gun violence prevention ministry coordinator with the Presbyterian Peace Fellowship. "When in fact the only way to truly be safe is to love our neighbors, help those that are struggling, to heal the underlying problems that lead to the violence in the first place."

Mills demonstrated how to use his training equipment on a recent Sunday during a safety seminar at North Pointe Baptist Church in Hurst that drew hundreds of parishioners from across the area.

Mills laid out the Glock firearms that are modified so they can't accept live ammunition on a black folding table. Curious churchgoers held them in their hands; some aimed the guns at white mannequins wearing the high-tech vests.

The equipment sells for $1,900, and Mills estimates an equal number of churches and police departments have used it to practice. The full cost of a training course in Texas can range from $55 for a half-day class, to over $800 for a 60-hour program.

Trainees "might not have to shoot somebody," said Mills, who owns Fort Worth-based Virtual Tactical Training Resources. "But if they have to, I want them to be as well-trained as they possibly can."

Unless a house of worship posts a prohibition, all it takes to legally bring a loaded gun into a Texas church is a state-issued license to carry. To pass the one-time state shooting test applicants must hit a paper target from 9 and 21 feet away, roughly the length of a cargo van.

In a bid to make protection more accessible to small churches, the Legislature in 2017 waived state training requirements and fees for congregations that want to form their own armed safety teams.

While many owners of church security businesses endorsed the change, they still stress that training is needed to avoid an accident.

Jack Wilson, who drew his gun and shot an assailant at his White Settlement Church six seconds after the attack began, is a firearms instructor who trains his own congregation's safety team on the gun range.

The Texas Legislature should consider imposing some standards for training now that there have been a series of attacks at religious institutions, which can inform best practices, said Alex del Carmen, associate dean at the School of Criminology, Criminal Justice and Strategic Studies at Tarleton State University.

"The concern is there's such a variation across the state," he said. "I am afraid we have individuals out there, in name only, to protect fellow worshippers and when the moment is needed to pull a gun and shoot at somebody, they are not going to do it."

Several businesses put congregants through high-stress simulations, meant to prepare them to react in cases when their adrenaline is pumping.

A Tennessee-based company putting on training in San Antonio later this year runs one scenario where worshippers are armed with guns that fire non-lethal ammunition and then must track down and confront an actor shooting blanks inside the church. Before they start, participants are told every shot the actor fires represents a child who has been killed, said Ken Alexandrow of Agape Tactical.

The revelation is meant to get heart rates up to "where fine motor skills diminish," he said. "When they get that endorphin dump."

Chuck Chadwick, who founded Gatekeepers Security in 2006, is one of a few programs that still require churchgoers be licensed by the state as armed security officers. The process calls for participants to go through a background check, a psychological evaluation and hours of training in everything from hand-to-hand combat to handcuffing techniques.

He estimates his firm has trained 500 volunteers at roughly 100 houses of worship in Texas, including Preston Trail Community Church in Frisco.

There, a team of 30 congregation members guards the doors during Sunday services that can draw 3,000 people. They also form a detail to shadow pastors when they are on the campus, said Michael Sanders, the campus security coordinator who helped form the team in 2012.

No one on the team has ever drawn a gun, he said. The volunteers have, however, escorted people from the church, including a man who stood up from the pews and began shouting obscenities and another who showed up on campus in violation of a protective order.

Jimmy Meeks, a former police officer and pastor who organized the "Sheepdog Seminar" in Hurst on church safety, preaches the best skill is being able to talk someone down.

"You will use your mouth a trillion more times than your gun," Meeks, dressed in a black T-shirt and jeans, told a group of mostly middle-age and older attendees who scribbled notes on legal pads.

Such mass shootings are rare, but almost every Sunday someone in some church in the state must calm an angry or upset worshipper, Meeks said.

"If you think, 'I've got my gun and that's all I need,' you're a threat to everybody in here."

"Amen to that," said a man in one of the back pews.

Those drawn to serve on church safety teams are often former law enforcement or military members but also include nurses and schoolteachers, both women and men.

During a break in Meeks' four-hour seminar, Donna O'Toole and her husband edged their way into the church fellowship room, lined with businesses selling insurance, weaponry to practice with and security training.

One company showed off a portable door jamb, meant to stop an attacker from entering a room. Volunteers licensed by Sheepdog Defense Group wearing khaki pants, sidearms and earpieces connected to radios positioned themselves at each doorway.

O'Toole disagreed with her husband, who said he would rather run or fight instead of packing a pistol at their 250-member church in Axle.

"He probably won't want to carry; I will," said O'Toole, a registered nurse who helped form the medical team at their church. "As a woman, if I needed to protect myself and other people, I would want to have a gun."

Dave Harding agreed to join the volunteer security team at his Fort Worth church because the former U.S. Marine considers himself a protector, the type of person who always faces the doorway in restaurants.

His team is training with Sheepdog Defense Group largely because the business licenses volunteers as security officers and takes on the insurance liability for the church, he said. While some of the team members have military or law enforcement background, others include a college professor, schoolteachers and defense contractors.

On Super Bowl Sunday, Harding spent hours winding his way through the hallways of a Springtown church, practicing how to clear a building in a hostage situation. After the last scenario, where he and teammates tracked down a "shooter" inside the building, Harding's heart raced like it had during tours of duty in the Middle East.

"The stress inoculation is to get you closer to being ready for the real thing," he said.

(Smiley N. Pool contributed to this report from Springtown.)