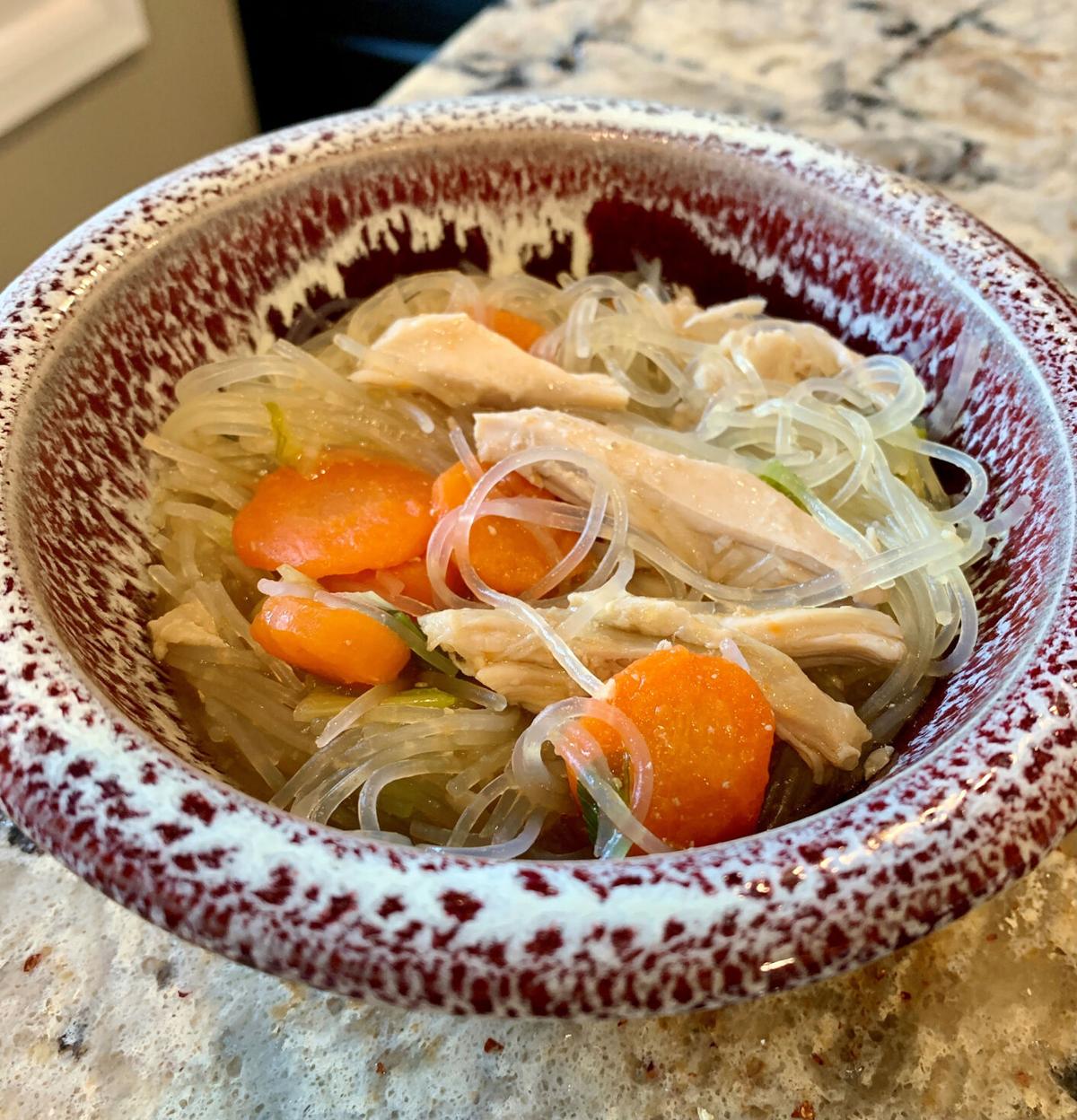 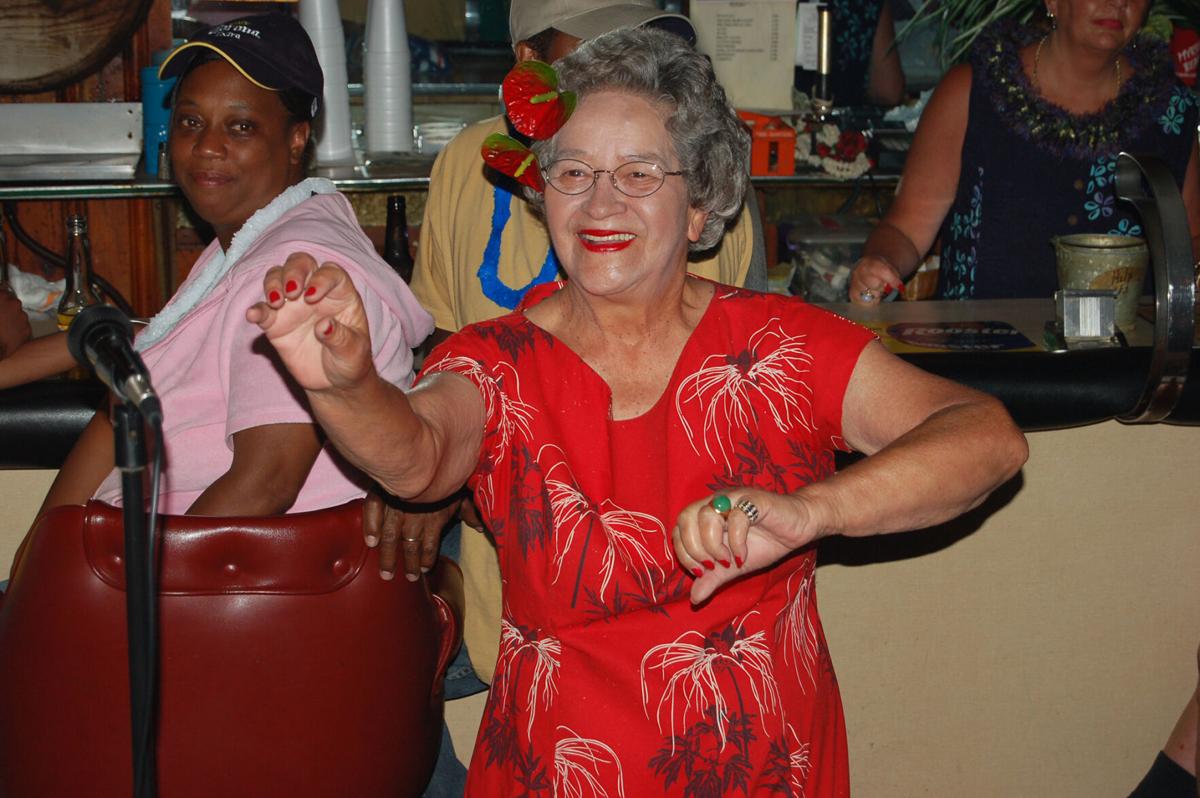 Eloise Swain dancing the hula during Friday night karaoke at The Cottage in 2006.

Eloise Swain dancing the hula during Friday night karaoke at The Cottage in 2006.

“I like the kind in the pink mesh bag,” Eloise Swain said when she first told me about the noodles she used to make Chicken Long Rice.

As I wrote in this column a few months ago, Eloise, who tended bar for many years at The Cottage in Johnson City, died in February at the age of 94. Words from that column were used at her funeral service in Hawaii.

We have Eloise’s fried rice recipe, which she made in a black-iron skillet. And, through the help of her daughter Kehau in Hilo, Hawaii, we can come pretty close to replicating Eloise’s Chicken Long Rice.

It’s a dish that, despite the name, contains no rice at all, although some people do serve it over rice. The term “long rice” refers to the bean thread noodles used in the dish.

The Stock Pot in Johnson City is a great source of Asian ingredients, and that’s where Eloise instructed us to go to buy the noodles, her favorites being the ones in that pink, stretchy bag. They go by several different names: cellophane noodles, glass noodles, bean thread noodles, and bean vermicelli among them. Whitish in color and in thick bundles, they turn almost transparent when added to liquids.

These are the same noodles used in the classic Chinese dish known as “Ants Climbing Trees.” In fact, those noodles reflect the strong connection between the cuisines of Hawaii and China. The “ants” in the dish, by the way, are actually bits of cooked ground pork that adhere to the noodles.

Although it’s common at Hawaiian luaus, Chicken Long Rice isn’t a well-known dish on the mainland, but it should be. My wife, Jill, called it the best chicken noodle soup she has ever had. It’s a one-pot meal, it takes no specialized culinary skills, it’s inexpensive to make, and it heats over very well. I’m sharing the recipe here like Eloise would have told it to a friend.

As a starting point to make Chicken Long Rice, I go by a recipe that Kehau shared with me from Foodland, Hawaii’s largest locally owned and operated grocery retailer, with 32 stores. It calls for bone-in chicken thighs. I use one pack, which typically contains four thighs. Although the recipe does not tell you to remove the skin, I do.

In a large Dutch oven, I place about six thick slices of fresh, peeled ginger that I have given a light whack with a meat pounder or batticarne. Then I throw in a couple of cloves of fresh garlic, peeled and smashed. Pour in about five cups of chicken broth, low-sodium if you have it, and keep some extra broth on hand for reheating the dish, since the noodles will absorb a lot of the liquid.

Add the chicken thighs and a teaspoon of Hawaiian salt, if you have it. This is a reddish, unrefined sea salt that gets its color from a volcanic clay rich in iron oxide. If you don’t have any, just use regular kosher salt or table salt. Simmer, uncovered, until the chicken is done. This should take about half an hour. As the chicken cooks, skim off any residue that floats to the top. Although the Foodland recipe doesn’t specify them, I always toss in about three carrots, peeled and sliced, when the chicken is almost done. Kehau likes to add some dried shiitake mushrooms that have been soaked in water.

With a slotted spoon, transfer the chicken to a plate to cool. Then remove the chicken from the bones and shred it coarsely.

Some recipes say to soak the bean thread noodles in water, but the Foodland one doesn’t, and the results are just fine without the soaking step. Stir the noodles into the hot broth and simmer, uncovered, until they are translucent, about six minutes. Stir in five or six green onions, chopped, and add the chicken back to the broth. Season with about one teaspoon of soy sauce. Remove the ginger before serving.

I like some heat, so at the table, I often stir in some Chinese chili garlic sauce. To reheat the soup the next day, add some more chicken broth to the pot.

Foodland describes Chicken Long Rice as “a local favorite that comforts the soul and brings back fond memories.” Indeed.

Fred Sauceman’s latest book is “The Proffitts of Ridgewood: An Appalachian Family’s Life in Barbecue.”

Fred Sauceman’s latest book is “The Proffitts of Ridgewood: An Appalachian Family’s Life in Barbecue.”