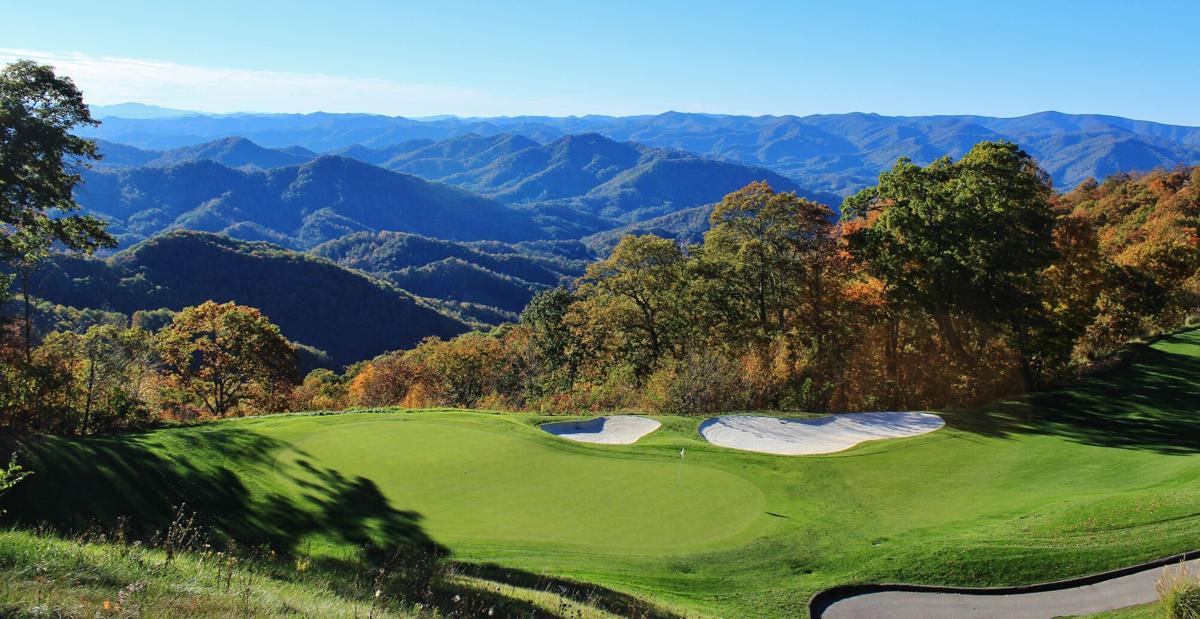 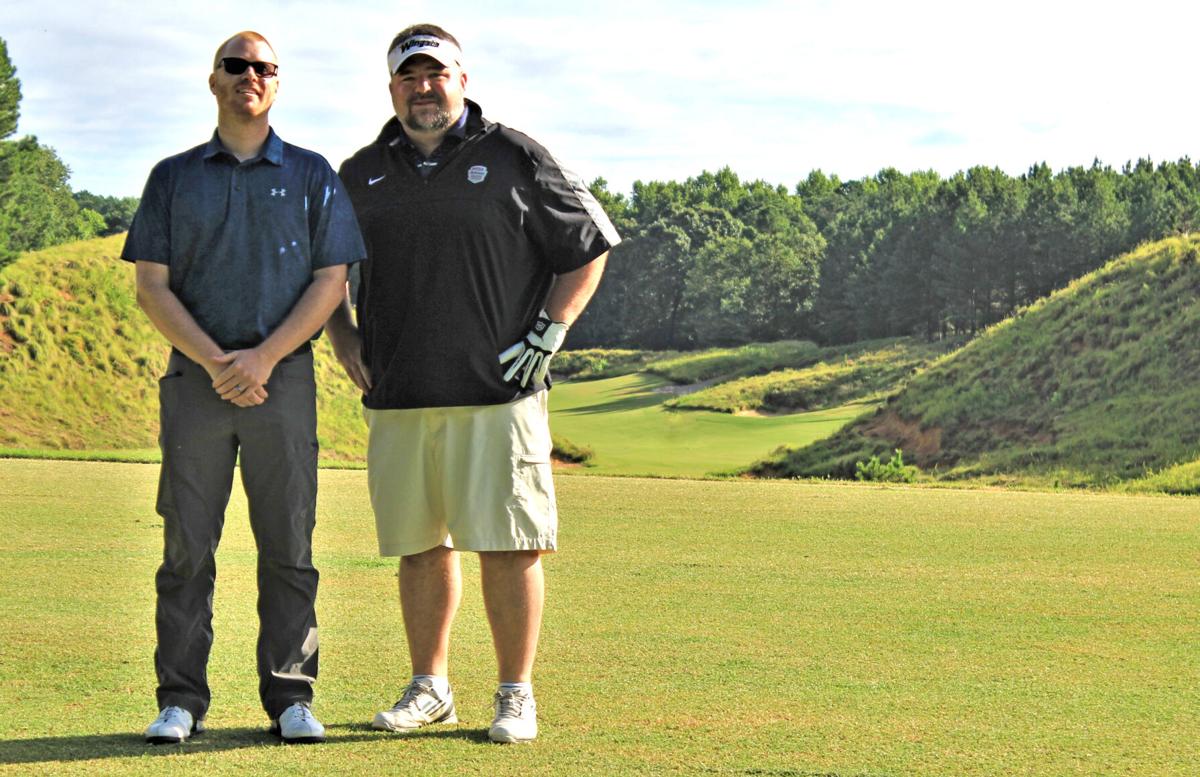 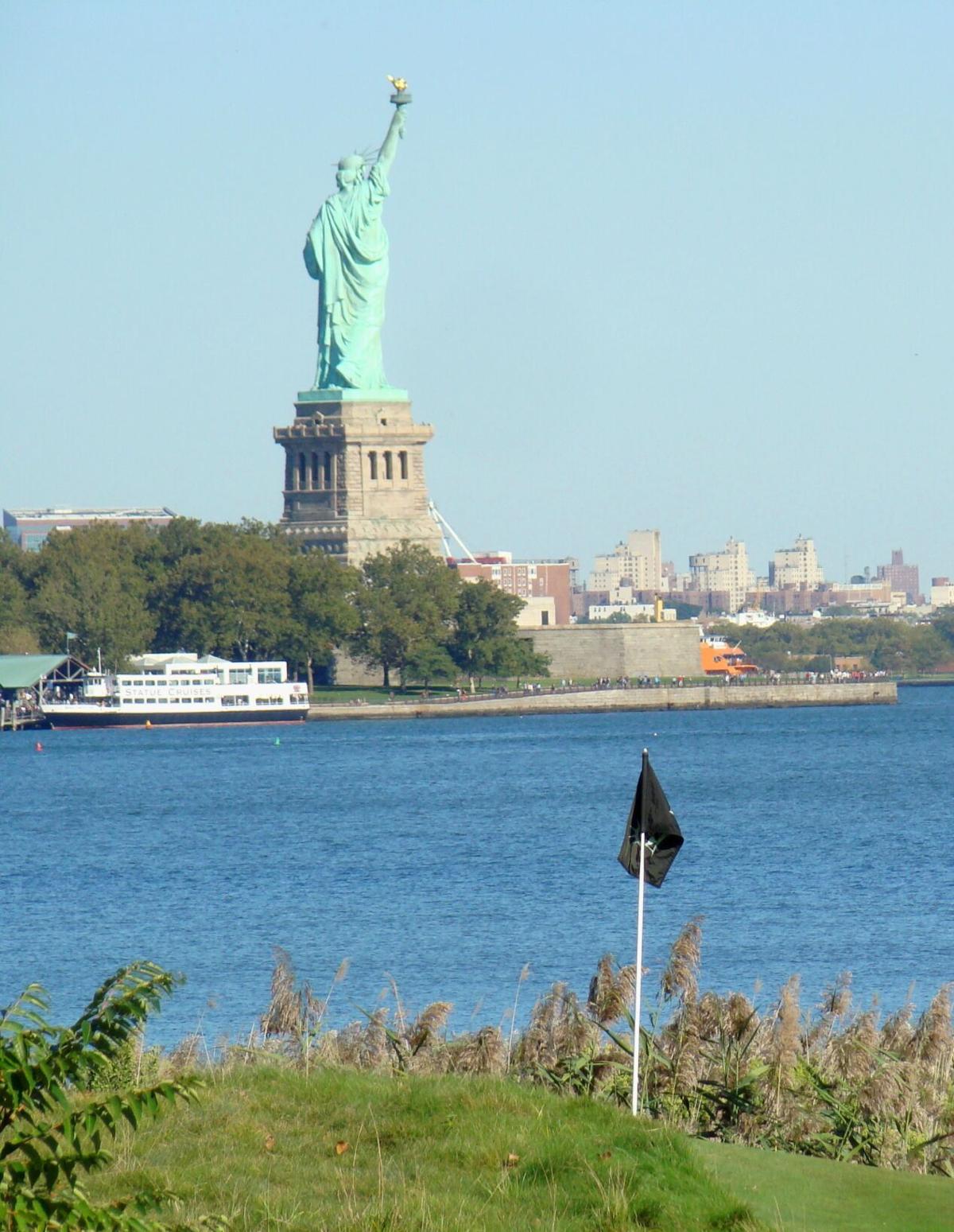 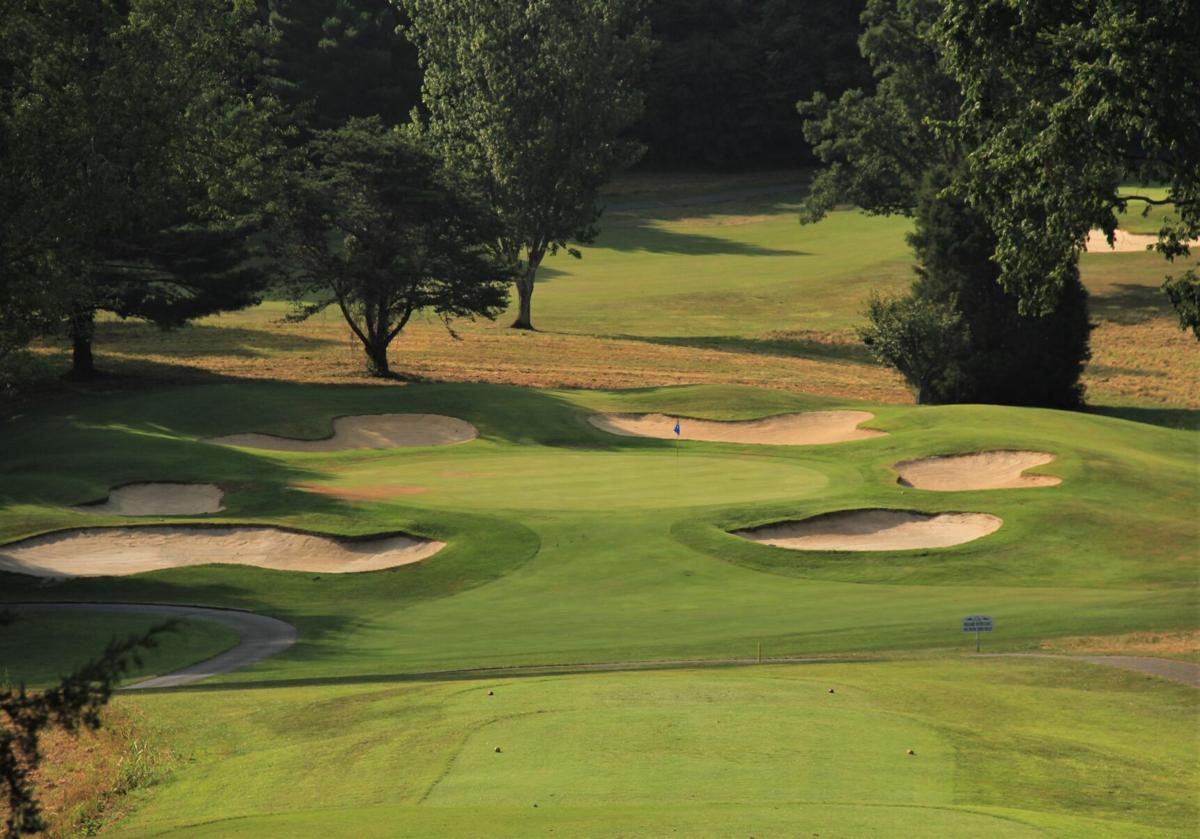 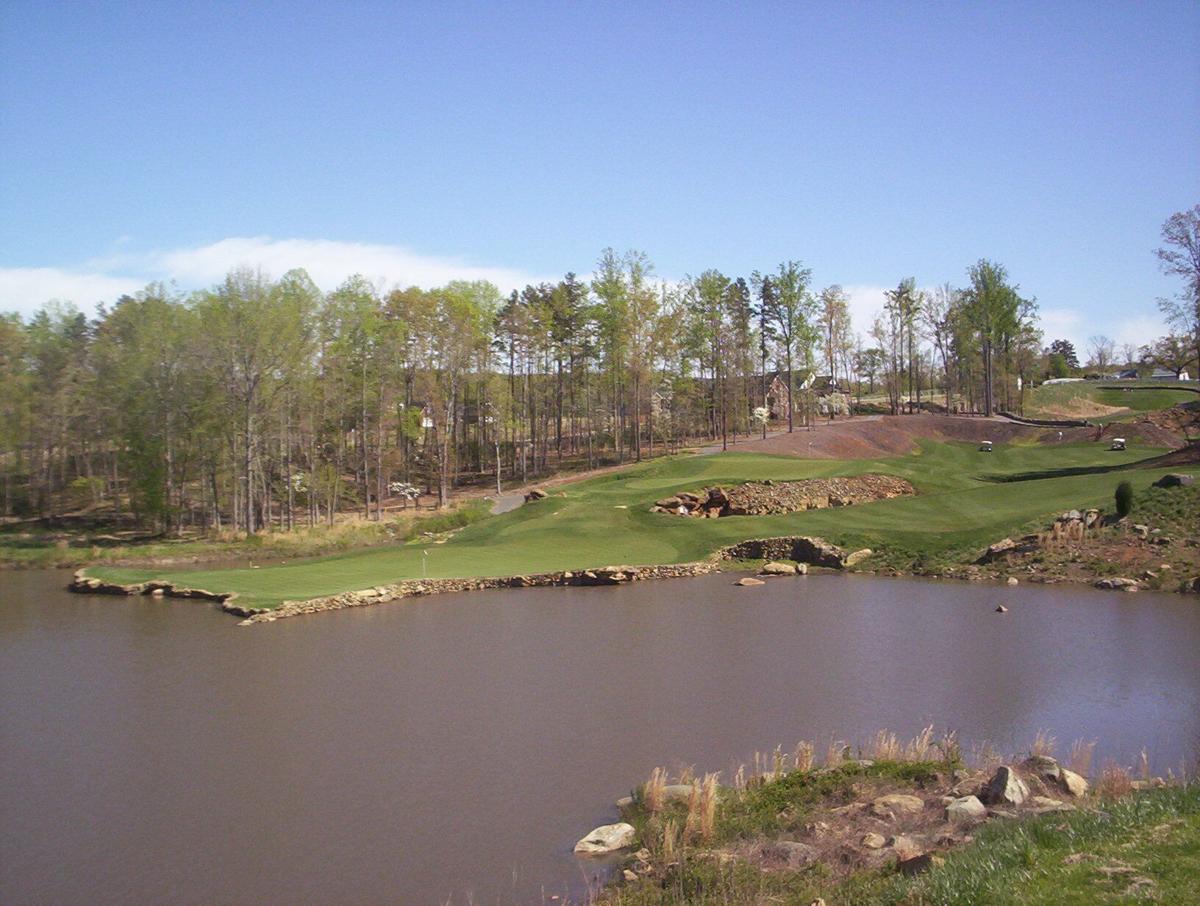 Tot Hill Farm is one of Mike Strantz’s masterpieces.

Tot Hill Farm is one of Mike Strantz’s masterpieces.

Some people are passionate about the game of golf. And then there are Landon Owen and Brett McNamara.

The two childhood friends may have gone their separate ways since their early days in Rochester, New York, but they have managed to constantly land in the same destination — a golf course.

Their love and passion for the game has led to quite a quest. You might even call it a crusade, because they do.

Meet the two members of the Golf Crusade, just a couple of guys who set a goal to play 1,000 golf courses between them and document the entire journey.

“We were a little under 400 total and we decided this is what we were going to do,” said Owen, the senior director of ticket sales and operations at Bristol Motor Speedway who lives in Johnson City.

They’re up to 465 now and they’re certainly not in any hurry to complete the quest. In fact, they’re taking their time so they can enjoy the ride.

Just putting together a list was one thing, but then the crusade began to take on a life of its own. The two started a website — www.golfcrusade.com — and opened several social media accounts. Thousands of golfers began to notice the reviews of courses, articles and photos — and then so did the courses.

“It’s been a pretty neat journey,” Owen said. “We’ve got about 5,000 followers. We have a couple of different side channels that we run and our website traffic since COVID has gone through the roof.

“People seem to really like it. There’s high interaction, but mostly it was just a way to push to catalogue all the courses that we played and hopefully help connect other golfers to these courses that we’ve visited.”

As the courses began to notice, the two became more visible in the golf world. Except they write and post under assumed names and they don’t use photos of themselves.

“We’re starting to pop with more web hits for a course than that course’s website,” Owen said. “The courses have liked it so much because they get the free testimonials and the good photos, and stuff like that they can share. We have courses reach out to us all the time wanting us to come play their courses and tell their stories. I have to admit, some of them are pretty spectacular.”

Owen and McNamara also provide photographs for several courses to use on their websites. Johnson City Country Club is one of the courses to use their work.

The two don’t make any money off the project. It really is simply for the love of the game.

“Everybody always says ‘Hey, how can you help grow the game?’ ” Owen said. “Well we’re not going to go give lessons. Nobody wants to take a lesson from me. They might from Brad, but not from me.

“We can introduce our own kids to the game. But you can’t play 1,000 courses if they all close. So the way we felt that we could help it grow was to tell good stories and bring our experiences to others and it’s been great. The responses overwhelm us every day. It’s really cool. People contact us every single day telling us where they’re traveling and asking us where they should play.”

To that end, the website has an interactive map showing every course on the list. It has the two crusaders’ rating of each course along with photos and contact information.

Ask Owen if he has a favorite course among the hundreds he has played and he breaks his answer down into three categories.

“The most prestigious place I’ve played was Liberty national. That was special. And if I had to play one course every day for the rest of my life it would be Holston Hills in Knoxville. I live 97 miles from there and I would join there tomorrow if I had the time.”

As far as his favorite course, Owen lists Tot Hill Farm in Asheboro, North Carolina, as No. 1. It was designed by the late Mike Strantz and as you talk to Owen you realize he’s a huge fan of anything Strantz did.

“What a genius — oh my gosh,” Owen said. “It’s like one of those people that you could have at your dinner table from any point in history, he’d be at the table. You know, really just an artist in the true sense. He rode around on horseback with a sketchpad and drew his golf courses, just a very Renaissance kind of guy.”

Strantz died of cancer in 2005 after designing nine courses, including Tot Hill Farm, Tobacco Road near Pinehurst and Bulls Bay, just up the South Carolina coast from Charleston.

Owen and McNamara held a tournament at Royal New Kent, near Williamsburg, Virginia. It’s a Strantz course that had gone under but was brought back to life.

Owen and McNamara both worked in the golf business for a while. McNamara, who now lives in Charleston, was a caddy at the famed course Oak Hill in Rochester, New York and played college golf. Owen spent some time working in a pro shop as well as putting together golf packages.

“When a course shows up in Golf Digest or any of the national rankings of the best courses, they don’t really need people like us to spread the word,” Owen said. “While we are extremely lucky to have played some of those places, we want all courses to thrive. We love to help people discover a ‘hidden gem’ on a golf trip or a new course across town they’d not played before.”

One of the biggest impacts the crusade has had was helping a golfer in Iowa who was on a quest of his own. He wanted to play every course in the state and he had eight left.

One big problem was that one of those courses was very private, so private that it was played only by its owner and his guests.

After media outlets in Iowa picked up the story written on the Golf Crusade’s website, the owner of the course invited the golfer to bring a foursome to complete his journey. It was his 415th Iowa course played.

Although Owen and McNamara are honest in what they post, they tend to give the golf courses the benefit of the doubt in their reviews.

“We don’t say negative things about courses because not every course is perfect,” Owen said. “And it’s really hard work running a golf course.”

The crusade continues to gather momentum as more and more followers join the party and the website generates more traffic.

“We didn’t set out to do this,” Owen said. “We figured our moms would be our most visited people. We had no traffic at the beginning but it obviously has built. People trust us and we don’t take that lightly.”

Most often asked question of a golf dad: “How are you able to find time to play golf?”

Answer: “Get the OK from your wife to start a website that will track your journey toward playing 1,000 courses!" — Brett

“You hear a lot about the need to ‘Grow the Game.’ Well, we aren’t going to give people lessons and outside of introducing our own kids to the game, we might not be able to recruit a lot of new players. We figured the best way we could help was by sharing our passion for the game, the courses we play and the people we meet.” — Landon