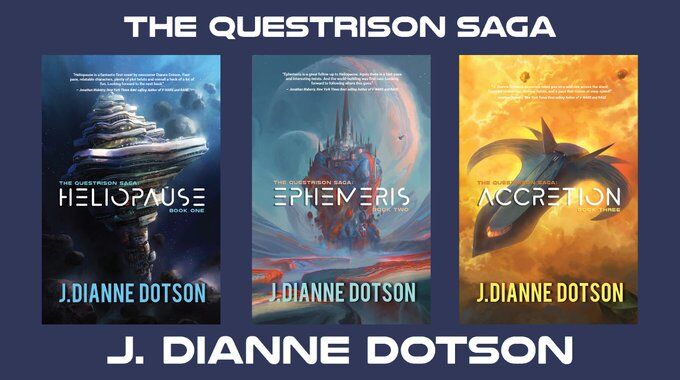 Kingsport native Dianne Dotson has authored three sci-fi books as part of her “Questrison Saga.” Her most recent book, “Accretion,” was released in May, and a fourth book is scheduled for release in 2021. 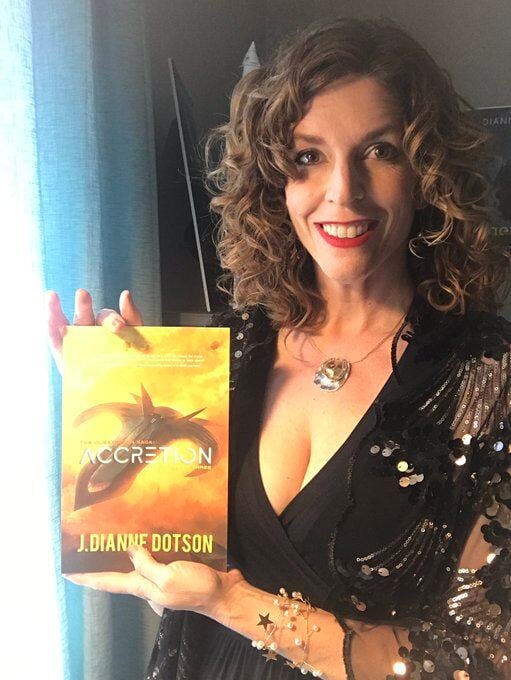 Dianne Dotson holds up a copy of her most recent book, “Accretion.” 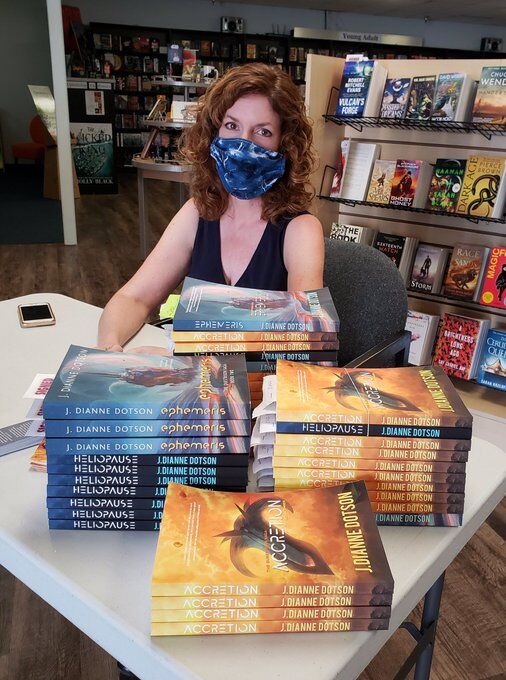 Dianne Dotson wears a mask while at a book signing at Mysterious Galaxy Bookstore in San Diego.

Kingsport native Dianne Dotson has authored three sci-fi books as part of her “Questrison Saga.” Her most recent book, “Accretion,” was released in May, and a fourth book is scheduled for release in 2021.

Dianne Dotson holds up a copy of her most recent book, “Accretion.”

As a child, Dianne Dotson began writing science-fiction in the 1980s, completing her first book at age 13.

With the help of an English teacher, she nearly went through the process of publishing her book but ended up “chickening out.” Dotson, however, never let go of the idea, and held onto her dream of writing a sci-fi saga. She stopped writing science fiction while in college, though she eventually graduated from the University of Tennessee-Knoxville with a bachelor’s degree in ecology and evolutionary biology.

In 2018, nearly two decades after she moved out west for better job opportunities, Dotson realized part of her dream, self-publishing “Heliopause,” her first book in the “Questrison Saga” series. In 2019, the second book, “Ephemeris,” was published, followed by a third, “Accretion,” in May.

“This was my baby,” Dotson said, “this was the series I was working on most of my life, and I wanted to self-publish it, but I wanted to make it extraordinarily high quality so you couldn’t tell the difference between it and a traditionally published book.”

In the days after the release of her third book, however, tragedy struck when her father died of cancer.

“Dad is a huge influence on everything I have ever done,” Dotson said. “It just immediately changed my entire life and my goals and everything the second it happened. I think the moment that dad died, it kind of killed my writing because I realized that so much of what I had done was for dad to be an audience for.”

Following her father’s passing, Dotson and her family decided to move from San Diego, California, back to her hometown of Kingsport to be closer to the rest of her family. Now that she’s here, Dotson wants to take her experiences as a writer and pass it onto others by starting a writing club for Southern and Appalachian authors. The idea, Dotson said, came from a writing club she was a part of while in San Diego, The Writers Coffeehouse.

“What Writers Coffeehouse did for me can’t be understated — I felt empowered, encouraged, I never felt like I had to be shy, my voice was heard, that’s what I want from this group,” Dotson said. “I want to start this great community of writers at any level that is powerfully inclusive, and I also want to take it to another level and help uplift marginalized writers in the group.”

“I really just want to get that rolling, and hope it appeals to people and we can start this great new thing — something to look forward to and give us all hope and something to inspire each of us to just keep writing,” she added, naming the group Wonder Holler Writers.

And though the writers group is important to her, Dotson is also a scientist and science writer, and wants to inspire other women and girls to go into STEM (science, technology, engineering and math) fields.

“This is a huge facet of my life that’s always been there,” Dotson said. “My dad inspired me, and it is my turn to reach my hand back and pull forward women and girls and marginalized people who have traditionally been shut out of the ivory tower of science.

“I want them to jump in feet first, get in there and do the science, the research, the writing and know that they’re not alone, that their fears and concerns are valid — I want to be a voice for women and girls in STEM.”

You can find more of Dotson’s work on her website, https://jdiannedotson.com/.