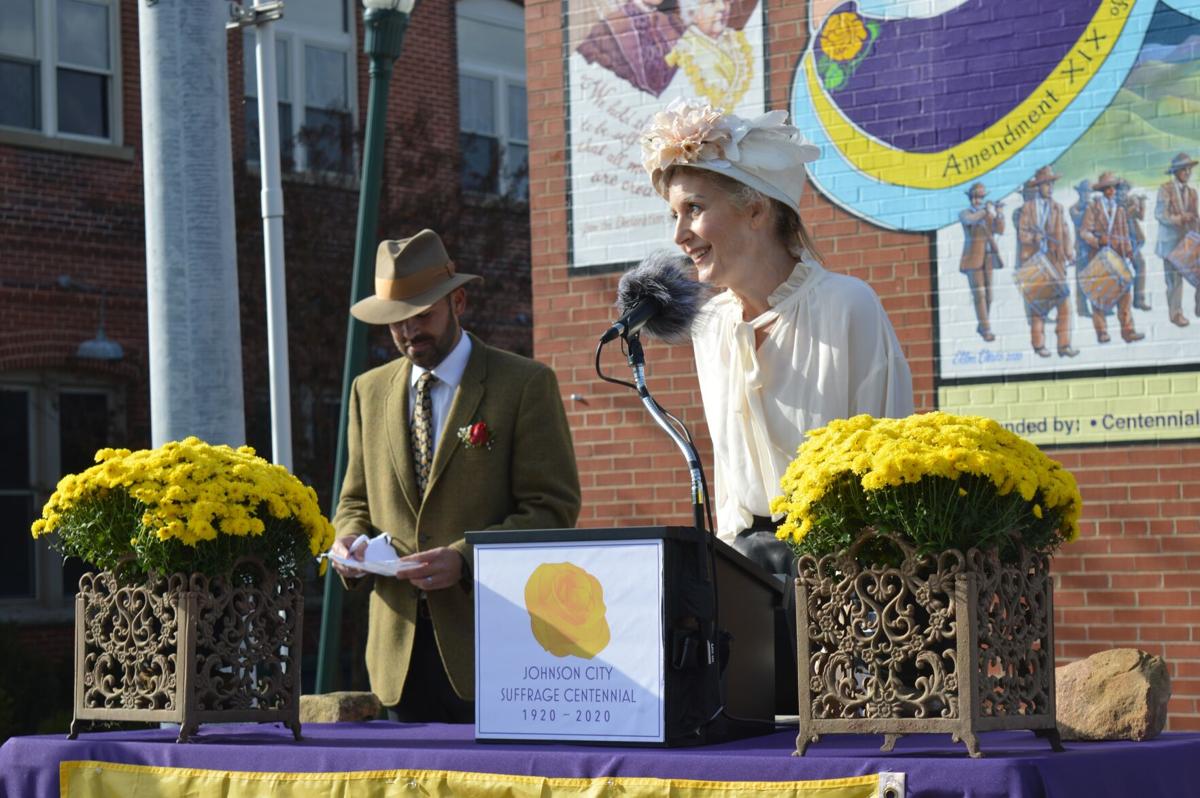 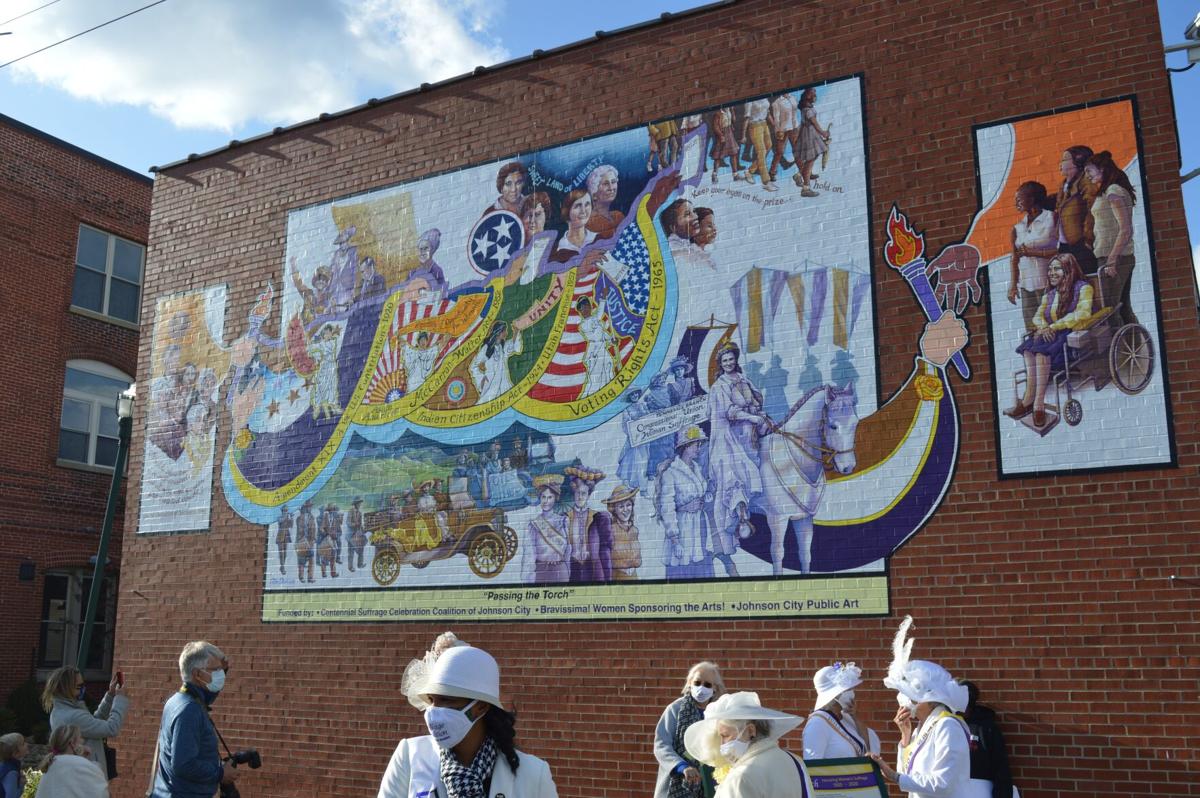 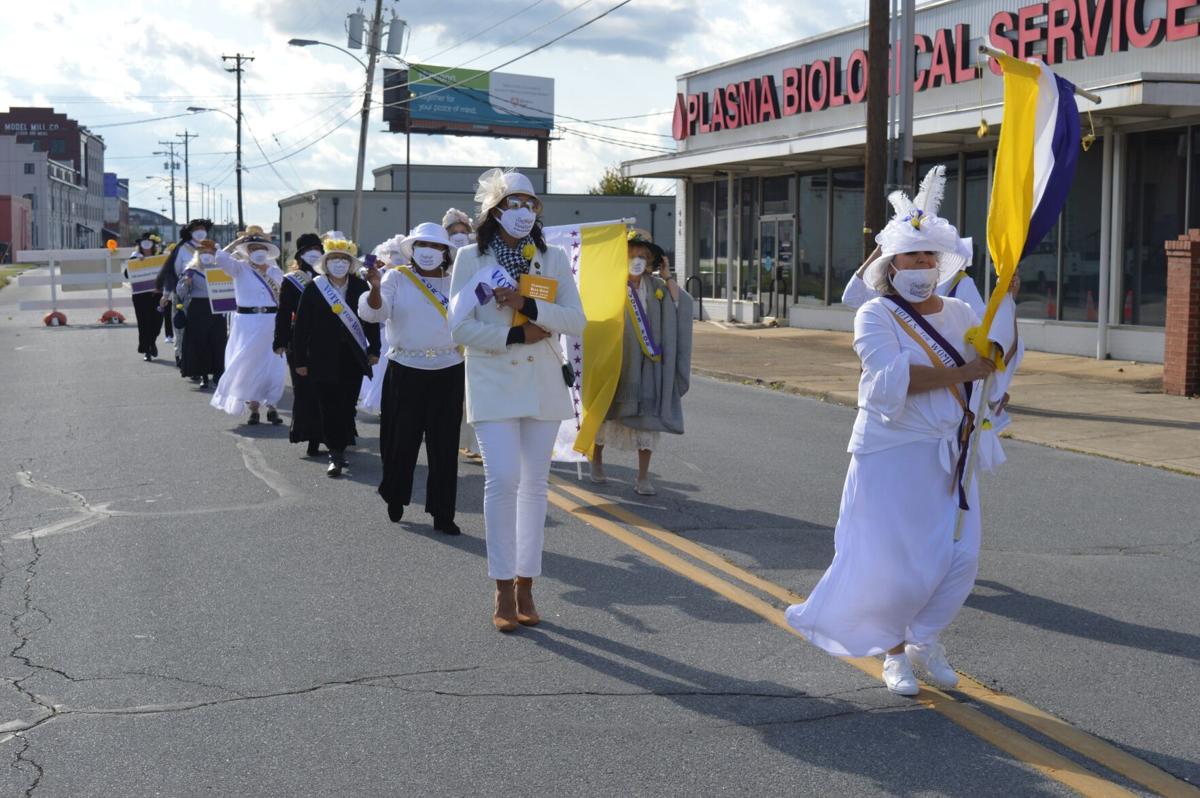 Members of the Centennial Suffrage Celebration Coalition held a reenactment of a women’s suffrage march before the unveiling. 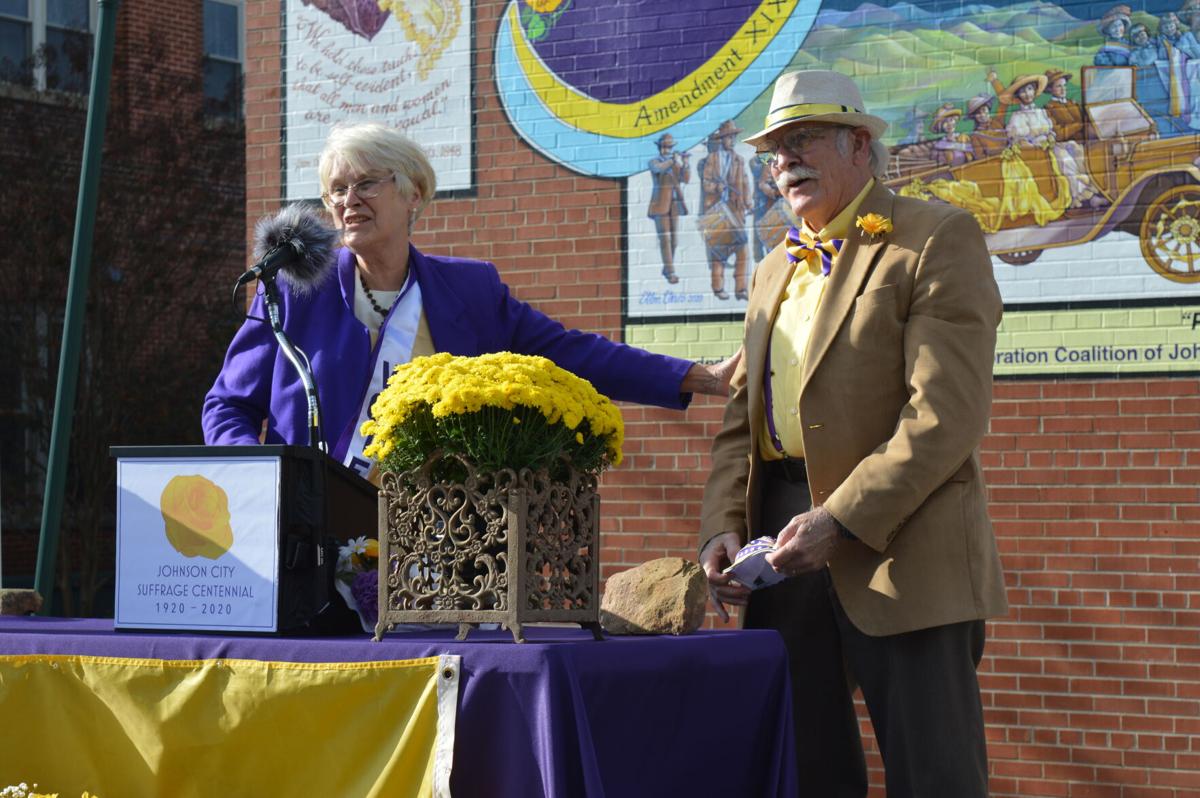 Muralist Ellen Elmes, accompanied by her husband Don, speaks to the audience at Sunday’s unveiling of her work, a mural called "Passing the Torch" that honors 100 years of women's suffrage. 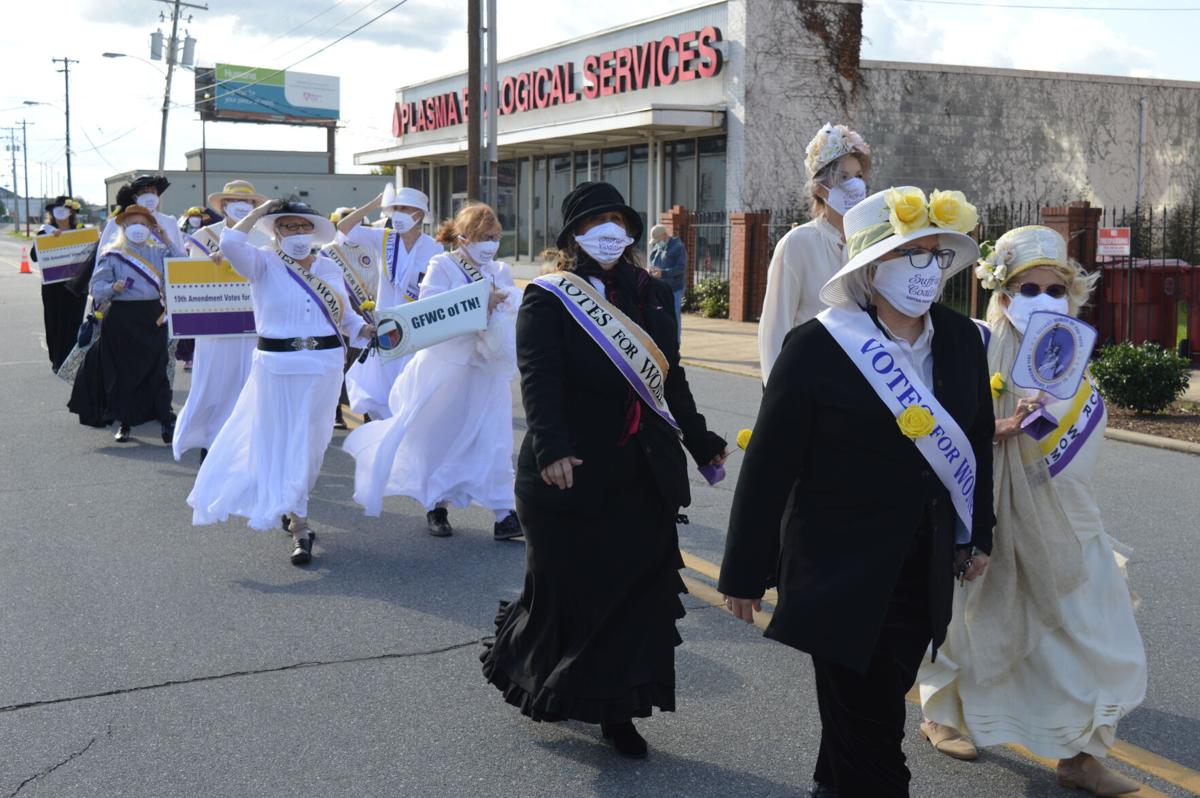 Members of the Centennial Suffrage Celebration Coalition of Johnson City held a reenactment of a women's suffrage march before unveiling a mural Sunday on Ashe Street. 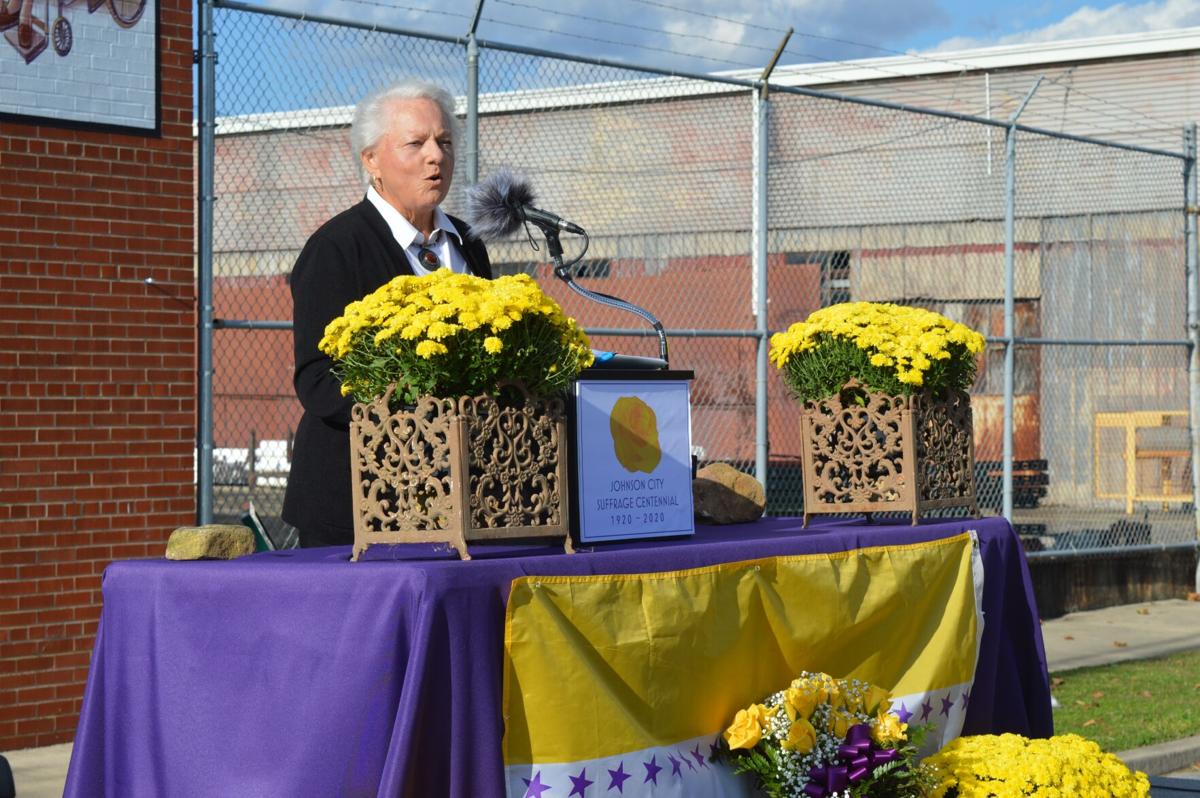 Members of the Centennial Suffrage Celebration Coalition held a reenactment of a women’s suffrage march before the unveiling.

Muralist Ellen Elmes, accompanied by her husband Don, speaks to the audience at Sunday’s unveiling of her work, a mural called "Passing the Torch" that honors 100 years of women's suffrage.

Members of the Centennial Suffrage Celebration Coalition of Johnson City held a reenactment of a women's suffrage march before unveiling a mural Sunday on Ashe Street.

Organizers didn’t originally plan to unveil a new mural representing the history of the suffrage movement just a few days before Election Day, but it ended up being a poignant reminder of the importance of the democratic process.

“To be able to point out that not all men were created equal in the founding documents of this country was not an easy task,” Johnson City Mayor Jenny Brock told a masked crowd on Sunday afternoon, “and it took over 70 years of fearless commitment, tenacity, risk-taking and sophisticated writings and speeches to make the case that our nation wouldn’t reach its ideal state without the actualization of women’s rights.”

The Centennial Suffrage Celebration Coalition of Johnson City, which helped spearhead the project, formally unveiled the artwork during a ceremony over the weekend. Titled “Passing the Torch,” the mural depicts pivotal figures in the women’s suffrage movement, including women from East Tennessee who played important roles in advocating on behalf of the right to vote and the ratification of the 19th Amendment.

Located at 398 Ashe St., the mural shows early activists, including Susan B. Anthony and Sojourner Truth, symbolically passing the torch across generations of suffragettes and into the future.

“I tried to design it so that it conveyed the flow of women through history passing on from one to another the enthusiasm, the determination and the courage from generation to generation,” said artist Ellen Elmes, who installed the mural.

The mural also acknowledges that the crusade to secure enfranchisement for all women continued after the ratification of the 19th Amendment. It lists legislation approved in the following decades, including the Voting Rights Act of 1965, that worked to ensure the rights of women of color were also protected.

Being the 36th and last state needed for approval, Tennessee played a pivotal role in ratifying the 19th Amendment on Aug. 18, 1920. Harry Burn, a 24-year-old member of the Tennessee House of Representatives from McMinn County, cast the deciding vote after receiving a letter from his mother, Febb Burn, urging him to support the amendment.

In a brief reenactment during the unveiling on Sunday, Johnson City Commissioner John Hunter played the part of Harry Burn.

“Mr. Speaker, I vote aye,” he proclaimed, which drew a robust round of cheers and clapping from the crowd. “I believe we had a moral and legal right to ratify.”

Organizers also held an abbreviated women’s suffrage parade just before the event, which featured members of the coalition chanting, marching and ringing bells down a short stretch of Ashe Street. The reenactment was inspired by a suffrage parade that traveled through downtown Johnson City on Oct. 7, 1916, which included a drum and fife band and ended with a pro-suffrage rally near Fountain Square.

The Centennial Coalition had originally planned on organizing a larger procession and several education events this year, but the novel coronavirus (COVID-19) outbreak forced them to downsize the festivities in the interest of public health. Poor weather also made it necessary to reschedule the unveiling from Oct. 10 to Nov. 1.

Brock said she brought her grandchildren to see the mural a couple weeks before the event on Sunday. She said they were shocked to learn that women didn’t have a right to vote for a significant portion of U.S. history — that just wasn’t right, they told their grandmother.

Brock said the women who pushed for enfranchisement shared that conviction.

“They worked relentlessly to make rightful change happen,” Brock said. “So let us honor them by using our vote, for it is our voice to government.”