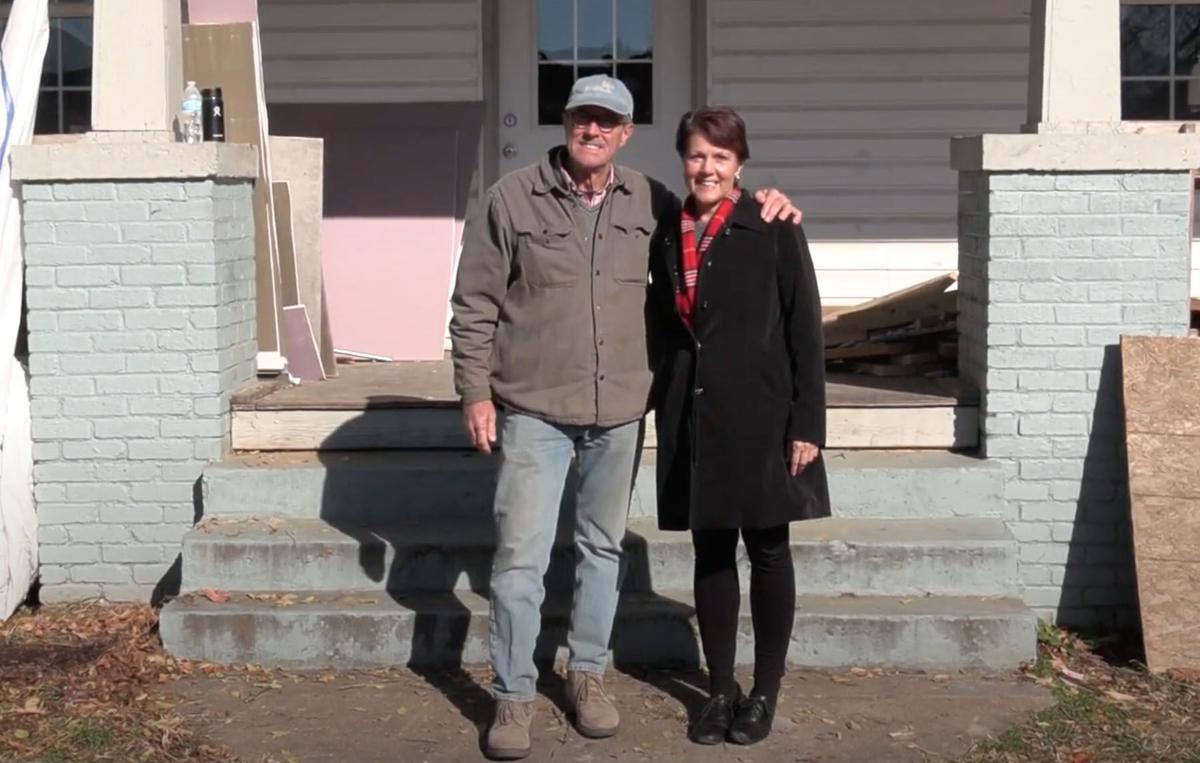 Steve McKinney and Donna Cherry have been working nearly one year to get this house renovated as what they hope to be the first of several Huschka House residences for youth at risk of being homeless and those aging out of foster care. 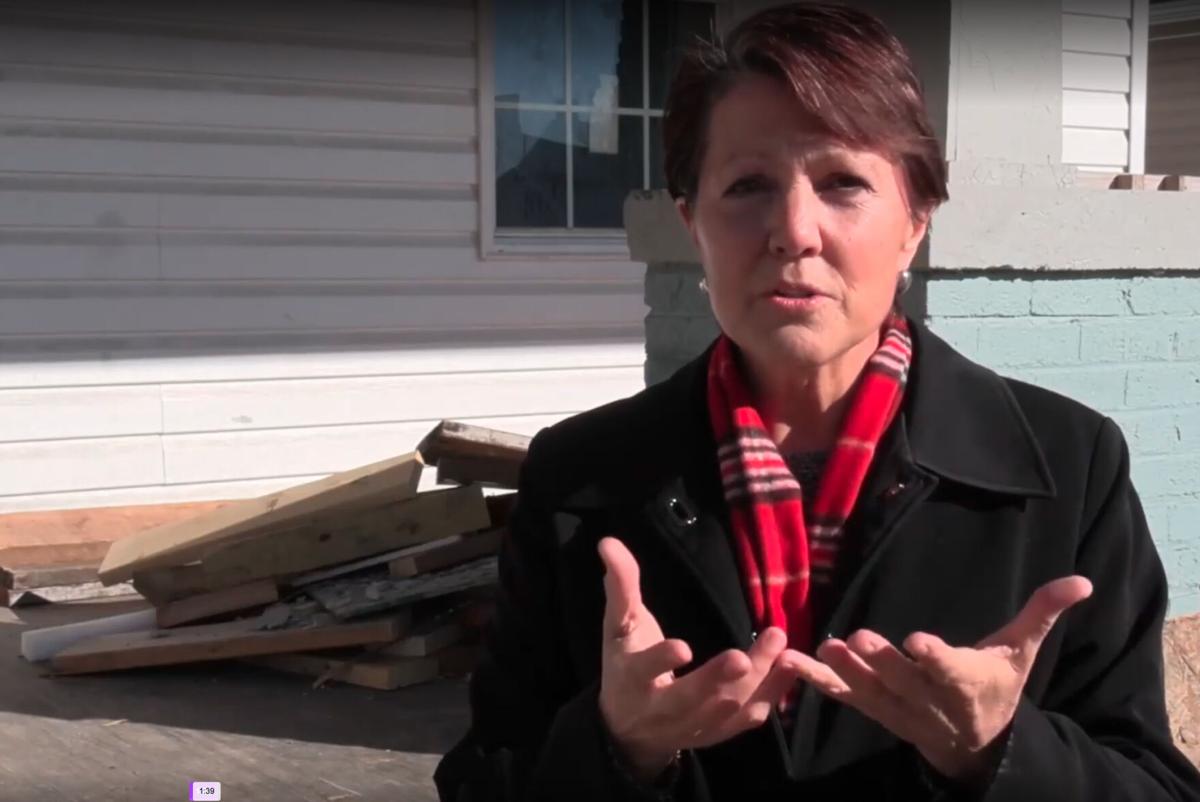 Donna Cherry initiated a non-profit to open a transitional living home for youth at risk of being homeless and those aging out of foster care. The Huschka House was named for Cherry's mother. 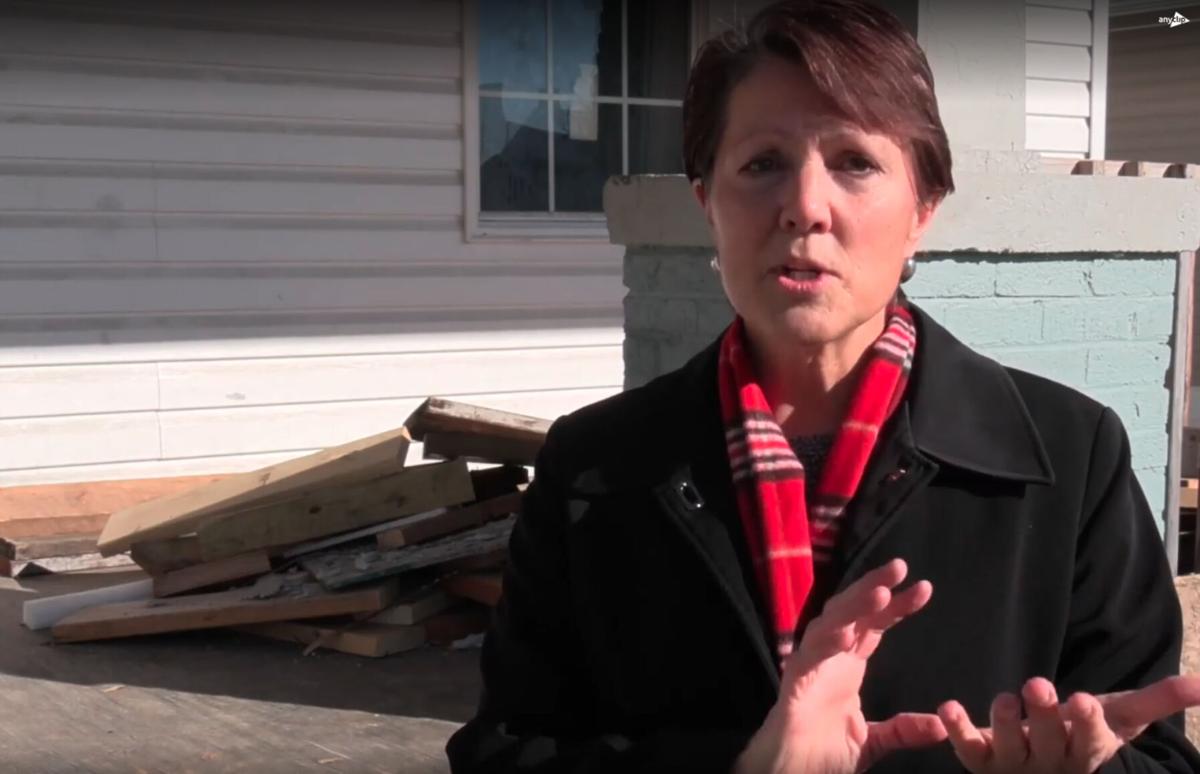 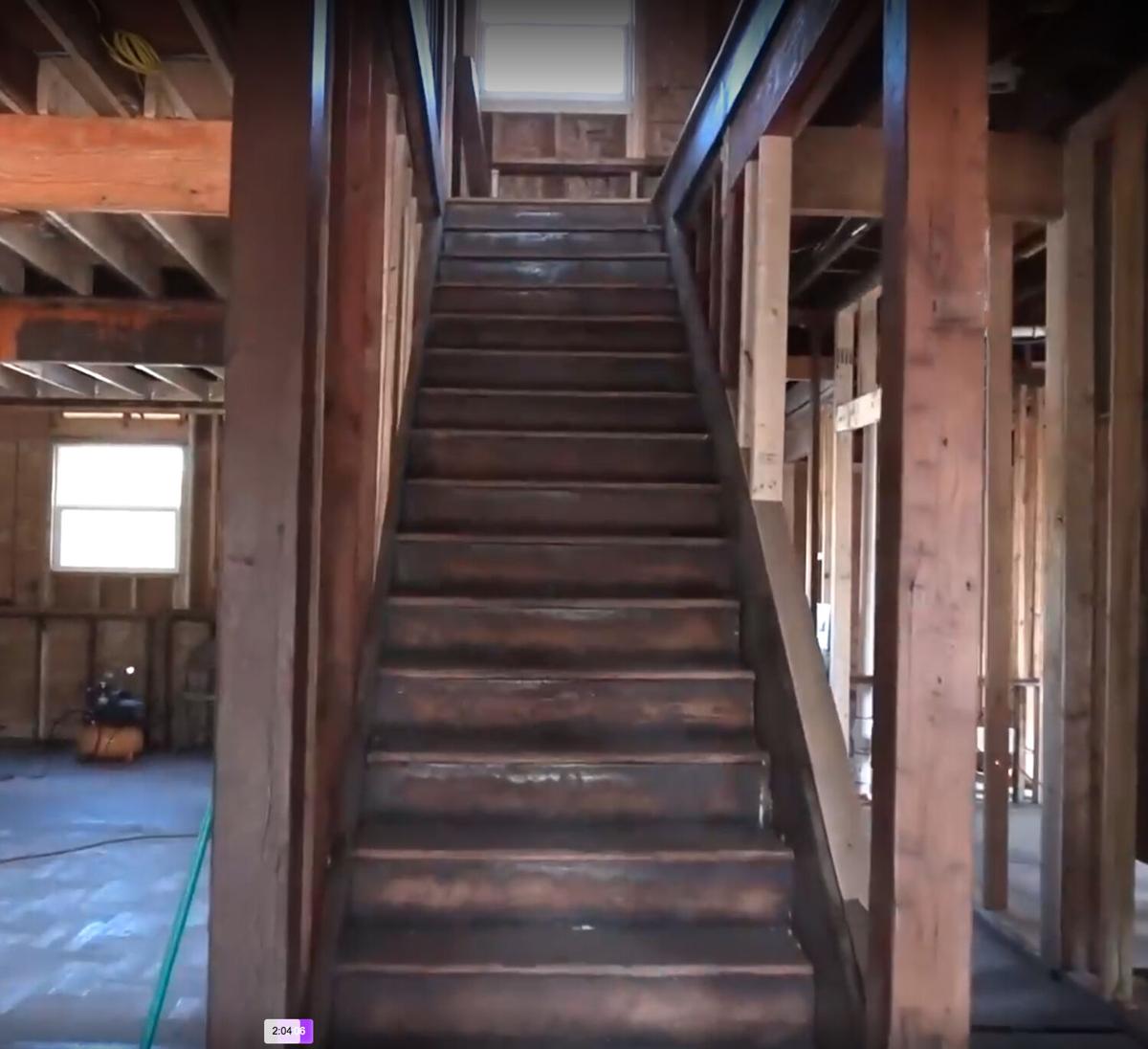 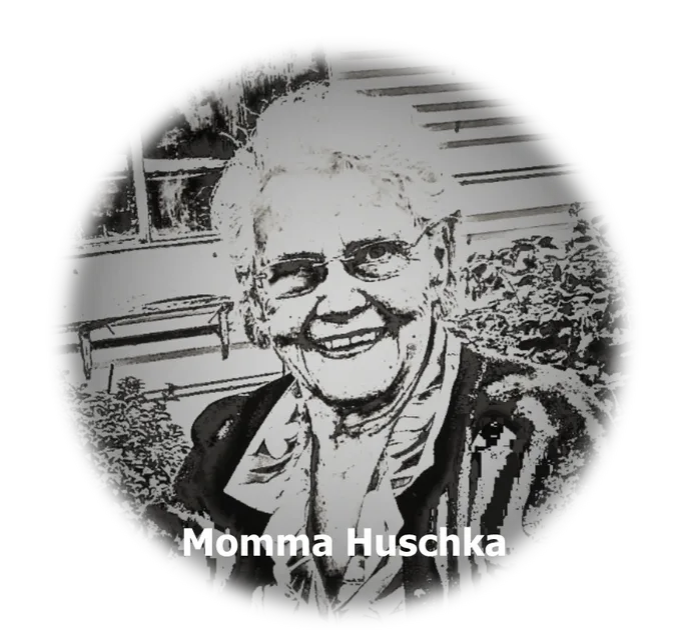 Steve McKinney and Donna Cherry have been working nearly one year to get this house renovated as what they hope to be the first of several Huschka House residences for youth at risk of being homeless and those aging out of foster care.

Donna Cherry initiated a non-profit to open a transitional living home for youth at risk of being homeless and those aging out of foster care. The Huschka House was named for Cherry's mother.

Ask Donna Cherry why she’s spearheaded a project to provide housing for kids aging out of foster care with no plan for their future, and she will sum it up in five words — “One life at a time.”

After serving on the Department of Children’s Services foster review board, Cherry realized there just wasn’t much to offer these kids when they age out of the system. That led to a project that she hopes can be the legacy and culmination of anything she’s done.

“When you look at the literature for foster care, there’s nothing compared to other social issues,” she said. All of that got her mind churning on how to provide that kind of service.

“I’ve benefited more in so many ways than many other people in the world. I think when you have more, you have a personal duty to do more. I have benefited by having a higher education … then I went on to get additional degrees. Not everybody can do that — not because of their intelligence, but because of opportunity,” she said.

“I operate under the premise that whatever set of skills, talents or gifts I have, there’s a command to do something with that (other) than just beyond my own personal fulfillment.”

Huschka House, named after her mother, will be a group of transitional living homes that can provide homeless youth or those transitioning out of foster care and the DCS system a leg up on learning how to support themselves. Whether it be figuring out how to attend college, find a job, buy a car or whatever, the one thing they won’t have to worry about is a place to live.

“It’s an effort I put together with my partner to provide affordable transitional living for kids who are aging out of foster care who are at risk of homeleness. It will include other youth in the 18 to 21 age group for services here, too,” she said.

“So what are they going to do? Beg, borrow or steal? Life doesn’t look very shiny for them going forward; we want to try to meet some of that need in our community,” she said.

With much of her work in the classroom, research and clinical settings, Cherry wasn’t immersed in practical application of her teaching. Her “ah ha” came after she started serving on the DCS Foster Care Review Board.

It’s a board of people directly or indirectly involved in kids in foster care and their status in the system. The board not only discusses particular cases, but members also involve the child and foster family.

She, like many before her, had the idea of providing a place for kids aging out of the foster care system to live temporarily while they figured out how to forge their way in the world. Fortunately, Cherry and her partner, Steve McKinney, had the resources to buy a house that will become a temporary home for those kids.

As the idea continued to grow, Cherry realized there needed to be more than just her and McKinney owning this house for these kids to live in.

From there, she applied for and obtained 501 ( c ) (3) status, set up a board of directors, with her as executive director and McKinney as the project manager.

Work on the five bedroom house near downtown Johnson City began in the fall of 2019, and contractors have kept steady on the task. Cherry said she loves to visit the house often and see the progress being made.

“One life at a time,” was the simple answer, but for Cherry and others involved, it goes far beyond those five words.

“It’s wanting to do something to benefit the community that gives meaning to my life, and then try to figure out what you as one little person (referring to herself) can do to try to make a difference. And so, this is one little person trying to bloom where she has been planted and make a difference. I have a great partner, so this has grown from Steve and I … but the most amazing thing to me is how much this resonates with people.

“What I thought this would be is, nobody would really care because foster care has its reputation of being a broken system, and I’m an underdog champion.”

Her own research in foster care was not because she had some connection to that growing up — Cherry grew up on an Oregon dairy farm where she lived with her parents, three brothers and two sisters. She realized there wasn’t much practical action available to homeless or foster kids.

“It was because of the question of who’s going to look out for foster care when there’s something more exotic to chase,” she said. “When you look at the literature for foster care, it’s nothing like what you see with other social issues.”

Cherry said some kids make it on their own when they age out of the system, but so many others do not.

“If there was something there to help them bridge that gap from foster care to getting on their feet a little bit, get a job and get a little maturity.”

Once Cherry jumped through all the hoops of creating the non-profit foundation, it’s been full steam ahead. Now comes the task of having a sustainable program where becoming an adult isn’t so scary for this particular group in society.

The first Huschka House will be for boys, but the charity is already working toward buying a house for girls in the same situation.

It’s not a free ride.

Residents will have to pay rent, be in school and have a job. Social workers will also assist the young adults navigate things like cooking, washing clothes, managing their money and all the other trappings that come along with adulthood.

“I was moved by the need,” Cherry said. “My motivation here came a few years ago, (and) I wanted to do something more, something in the community. I wasn’t sure what that was, but it was on my bucket list.”

Her research in foster care had always been at arm’s length, but when she became involved with the foster care review board, “that’s when I started to make sense of it in a real practical way.”

How You Can Help

The Huschka House non-profit needs the community to really get behind this idea to help it grow, Cherry said. “We have a budget whereby the kids who live in our houses have to work, because we are trying to push them into adulthood. But in order to have it subsidized so they can be saving for their own independence, we anticipate having to match their rent with fundraising.”

The agency launched a campaign to raise $50,000 for operating costs.

“We’re totally volunteer run. None of us take a stipend. We want to work toward a totally independent model in terms of financial sustainability. But as we’re just getting up and running we do have some costs we have to cover.”

According to the official website, GivingTuesday, or #givingtueseday as it’s known in the social media world, is the Tuesday after Thanksgiving and is “a global generosity movement unleashing the power of people and organizations to transform their communities and the world. It was created in 2012 as a simple idea: a day that encourages people to do good. Over the past seven years, it has grown into a global movement that inspires hundreds of millions of people to give, collaborate, and celebrate generosity.

“Whether it’s making someone smile, helping a neighbor or stranger out, showing up for an issue or people we care about, or giving some of what we have to those who need our help, every act of generosity counts and everyone has something to give,” she said.

“So for the GivingTuesday event, if you find it in your heart that foster kids who are aging out, or other kids in our community who are at risk for homelessness, who just need a chance … if that strikes a chord with you, we would really appreciate your support for GivingTuesday, she said.

If James Ausburn hadn’t had someone to guide him while he was in foster care, he’s not sure where he would be right now.