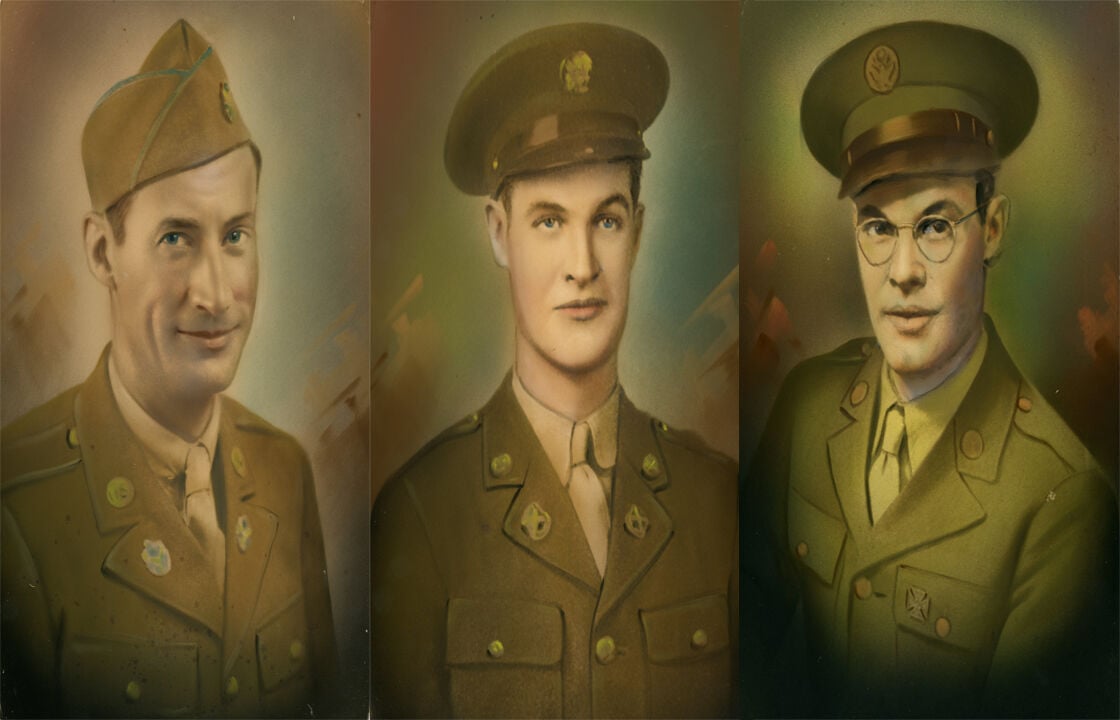 From left: Robert Denton "Dent", James "Earle" and Glenn Tester all served during World War II — none of the made it back. All three are buried side-by-side at the Henri-Chapelle American Military Cemetery in Belgium. 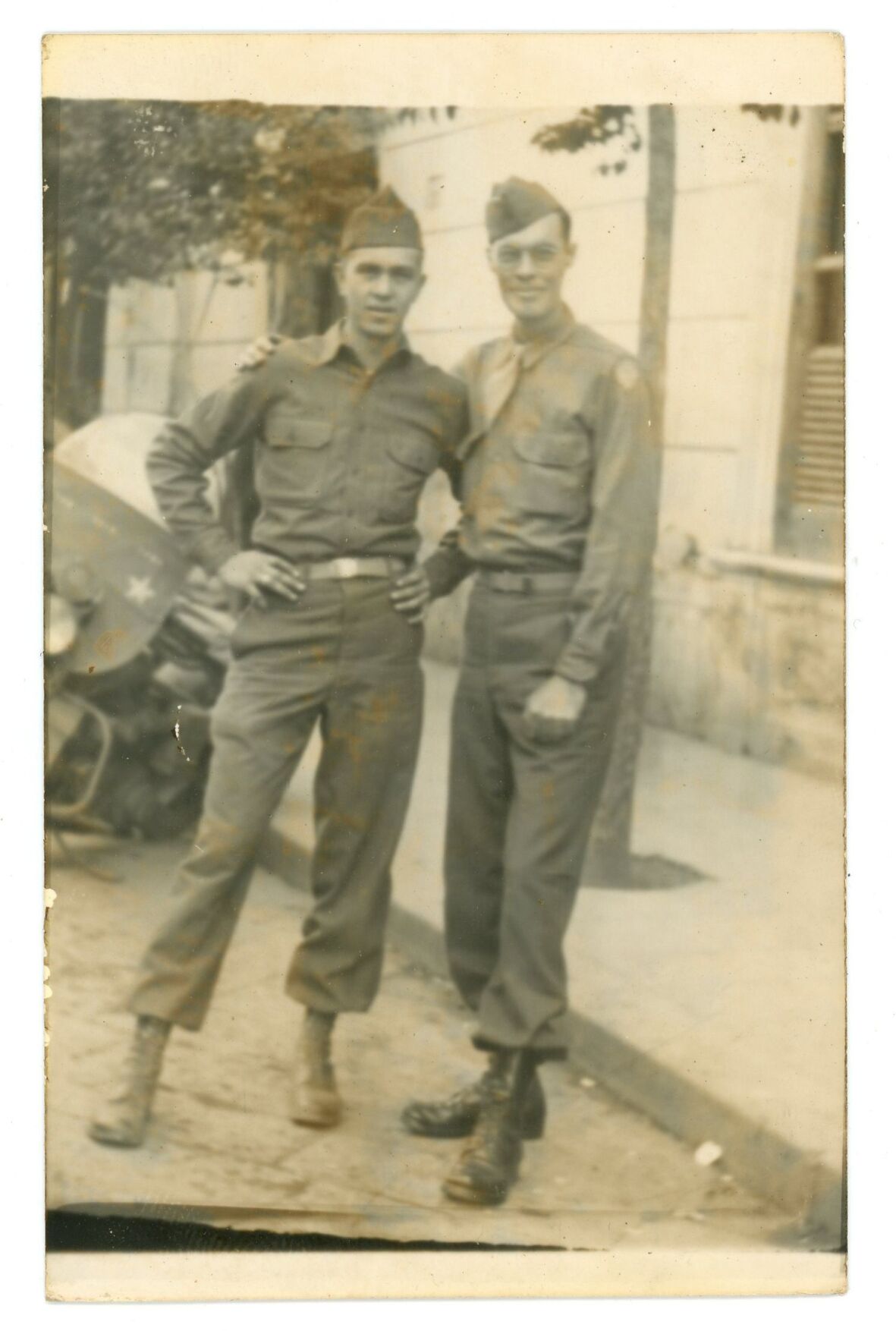 Glenn Tester (right) pictured with a friend in this undated photo. 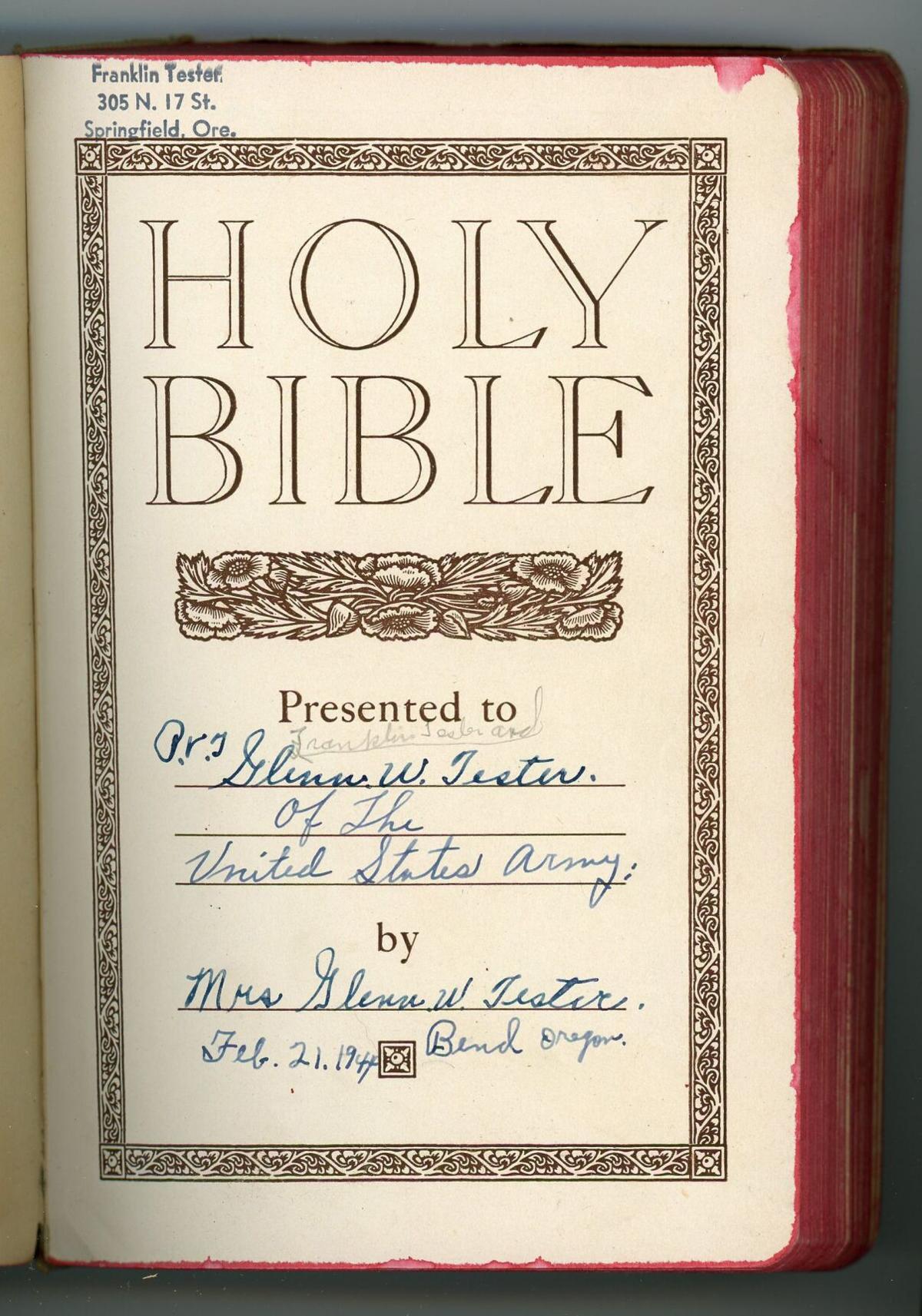 Glenn Tester's blood-stained bible was among the artifacts Frank Tester found after his mother's passing. 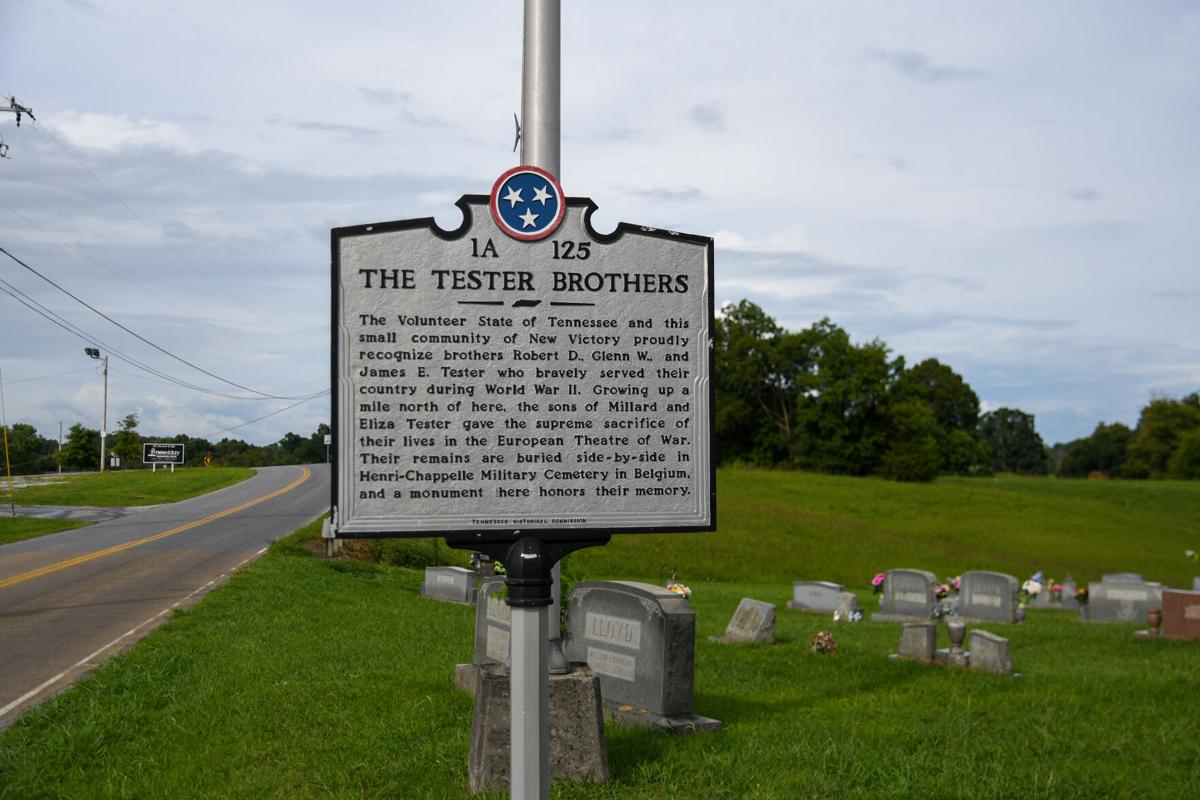 This historical marker s located alongside the New Victory Cemetery off on Conklin Road, commemorating the sacrifices of the Tester brothers in World War II. 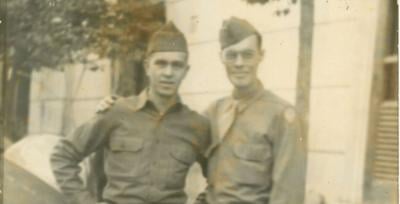 From left: Robert Denton "Dent", James "Earle" and Glenn Tester all served during World War II — none of the made it back. All three are buried side-by-side at the Henri-Chapelle American Military Cemetery in Belgium.

Glenn Tester (right) pictured with a friend in this undated photo.

Glenn Tester's blood-stained bible was among the artifacts Frank Tester found after his mother's passing.

This historical marker s located alongside the New Victory Cemetery off on Conklin Road, commemorating the sacrifices of the Tester brothers in World War II.

In July 1943, Glenn Tester enlisted in the United States Army.

It was just three months before he would become a father — meeting his son only once before he deployed to Italy in February 1944.

It would be 76 years before his son, Charles “Frank” Tester, saw him again, traveling to Belgium last September to visit the final resting place of the father he never knew at the Henri-Chapelle American Cemetery near Hombourg, Belgium.

Glenn Tester, who was killed while fighting in France, is buried alongside two of his brothers who were also killed in combat: Robert Denton “Dent” Tester and James Earle Tester. All three brothers, who enlisted in three different states, were born and raised in New Victory, a small farming community near Telford.

“It took me 76 years to get there,” said Frank Tester, who described the moment as a “blur,” of visiting his father’s grave. “It was just something I needed to do before I passed away because it is my father.”

Frank Tester, whose mother never really talked about his father, didn’t know much about him until after his mother passed, when he stumbled upon a box of his father’s belongings she had held onto all those years. Among the items Frank Tester found was the Bible his mother gifted his father before he left, a Bible that he was carrying with him when he was killed while fighting in the Vosges Mountains in eastern France on Jan. 9, 1945 — stained red with blood around the edges.

Frank Tester, who made the trip with his wife of 56 years, said he thought a lot about how he would react at the cemetery on the train ride there. As he puts it, it’s just like reading history — the only difference being that he shares a last name with those he’s reading and learning about, in many ways for the first time. Almost everything Frank Tester knows about his father and uncles comes from those artifacts and several books written about his family, the most recent of which is titled “Brothers in Arms,” by Kevin Callahan.

“It’s interesting,” he said of learning his family history this way, “but then again it’s like reading history.”

Though he did cry at his graveside, Frank said the trip and experience didn’t change much.

“It didn’t really change much,” he said. “That may sound callous, but there again if you don’t know somebody — I don’t mean to sound cold because it was my dad, but I knew of him, I knew he was buried there and I knew he was my father.

“I was sad, like I said I cried, but it’s not like living with somebody for 15 to 20 years and they pass away and there’s an emotional aspect to it,” he added.

The other two brothers, Dent and Earle Tester, also died in the European Theatre. Dent Tester enlisted first in February 1941, and died first on Nov. 26, 1943, when the transport ship he was on, HMT Rohna, was sunk by German aircraft. Dent Tester was among more than 1,100 people to die when the ship sunk off the coast of Tunisia.

Earle Tester, the only brother of the three who enlisted in Washington County, was the second to enlist, and also the second to fall. He first arrived in France on June 6, 1944, surviving the fighting on Utah Beach before being killed in action several months later in Germany near the Siegfried Line. He was awarded the Bronze Star with a ‘V’ for Valor with Oak Leaf Cluster, indicating a second award, according to the book “East Tennessee Veterans Memorial” written by John Romeiser.

The youngest brother, Carroll Tester, was the last son of Tester family still at home and was the one who retrieved the telegrams carrying the news of the deaths of his three brothers. Each time a telegram would arrive, he would walk two-and-a-half miles to collect it and deliver the news of their deaths to his mother — a mother who had already lost a husband to cancer in 1942 and another son to a heart issue later that same year.

At one point late in the war, Carroll Tester was drafted and reported to a military base in Georgia, only to be sent home once it was discovered he was the last living son at home. Two other brothers, Ray and Frank Tester, were alive but serving stateside and in Panama at the time.

Twenty-four years before Frank Tester made the journey to Henri-Chapelle, Carroll Tester made the same journey with his two sons, Pat and Mike Tester, and a grandson — a trip that both sons believe gave their father some closure. Mike Tester said his father was treated well during his visit, and was honored with a graveside ceremony and presented with a flag that had flown over the cemetery.

Though Carroll Tester was a reserved man who displayed little emotion, both of his sons believe he teared up a little during the ceremony.

“I think, as (Mike) said, he got some closure, but he was still reserved,” Pat Tester said. “I think he was kind of taking it all in.”

Less than a mile from Pat Tester’s home, a monument bearing the names of the brothers who never came home stands tall in the New Victory Cemetery, located right next to the graves of their parents Millard and Eliza Tester. Along the roadway bordering the cemetery, a Tennessee state historical marker also recognizes the sacrifices of the brothers.

Asked what best describes how they feel about the sacrifices of their relatives so many years ago, Frank, Mike and Pat Tester all had one word: pride.

“I’m very proud of all three of them,” Frank Tester said, “but of course there’s many, many others who are just equally as important as my dad and my two uncles. They lost their lives so that their children and their families could remain in a free country.”