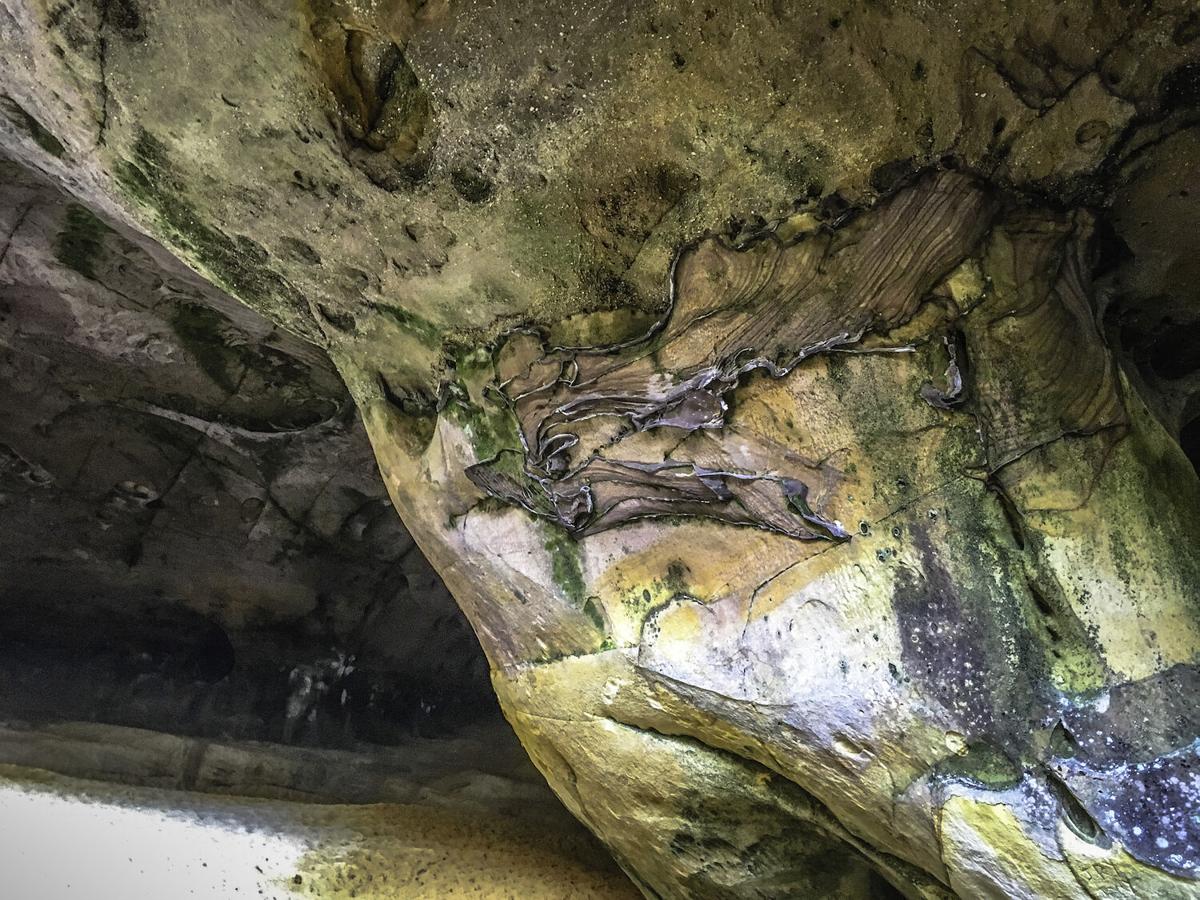 Beautiful swirls and striations on the walls of Sand Cave 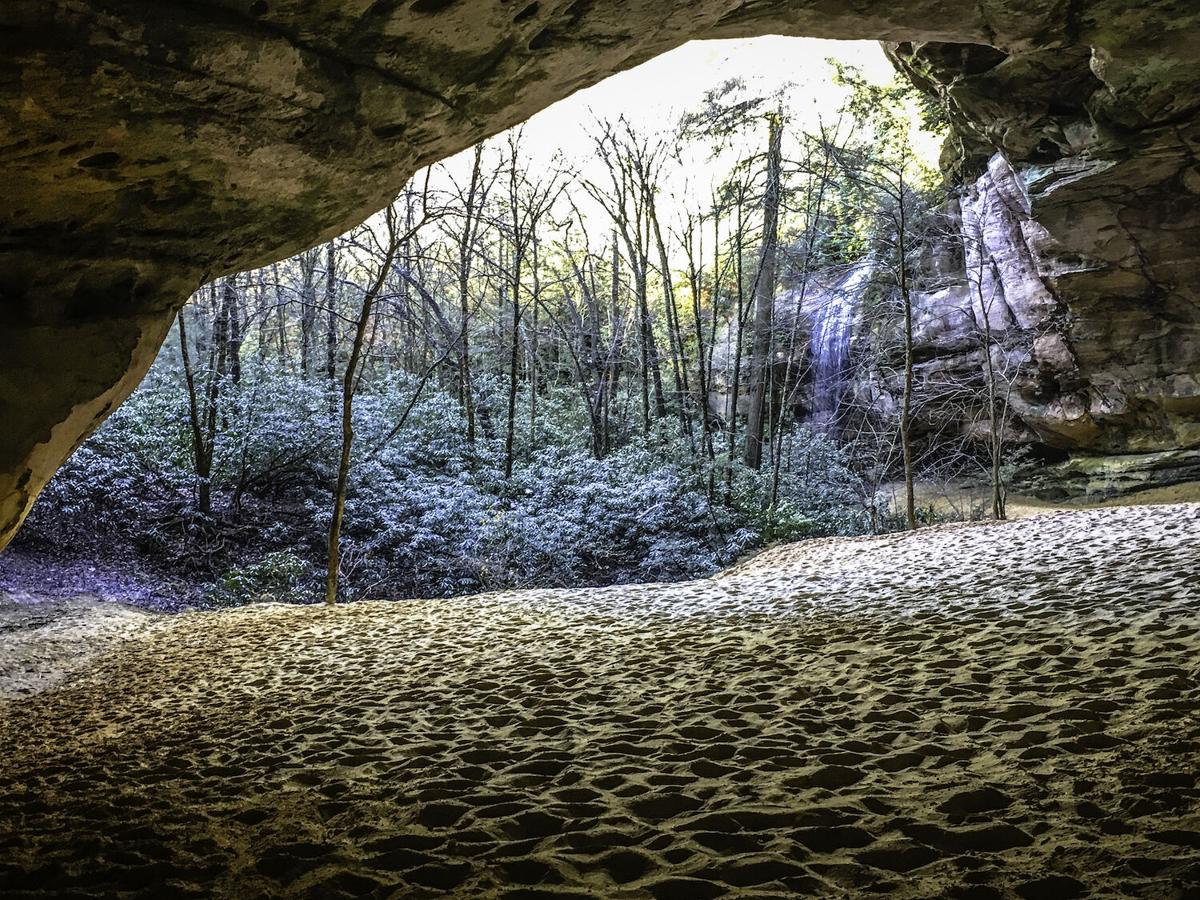 The waterfall at the Entrance of Sand Cave 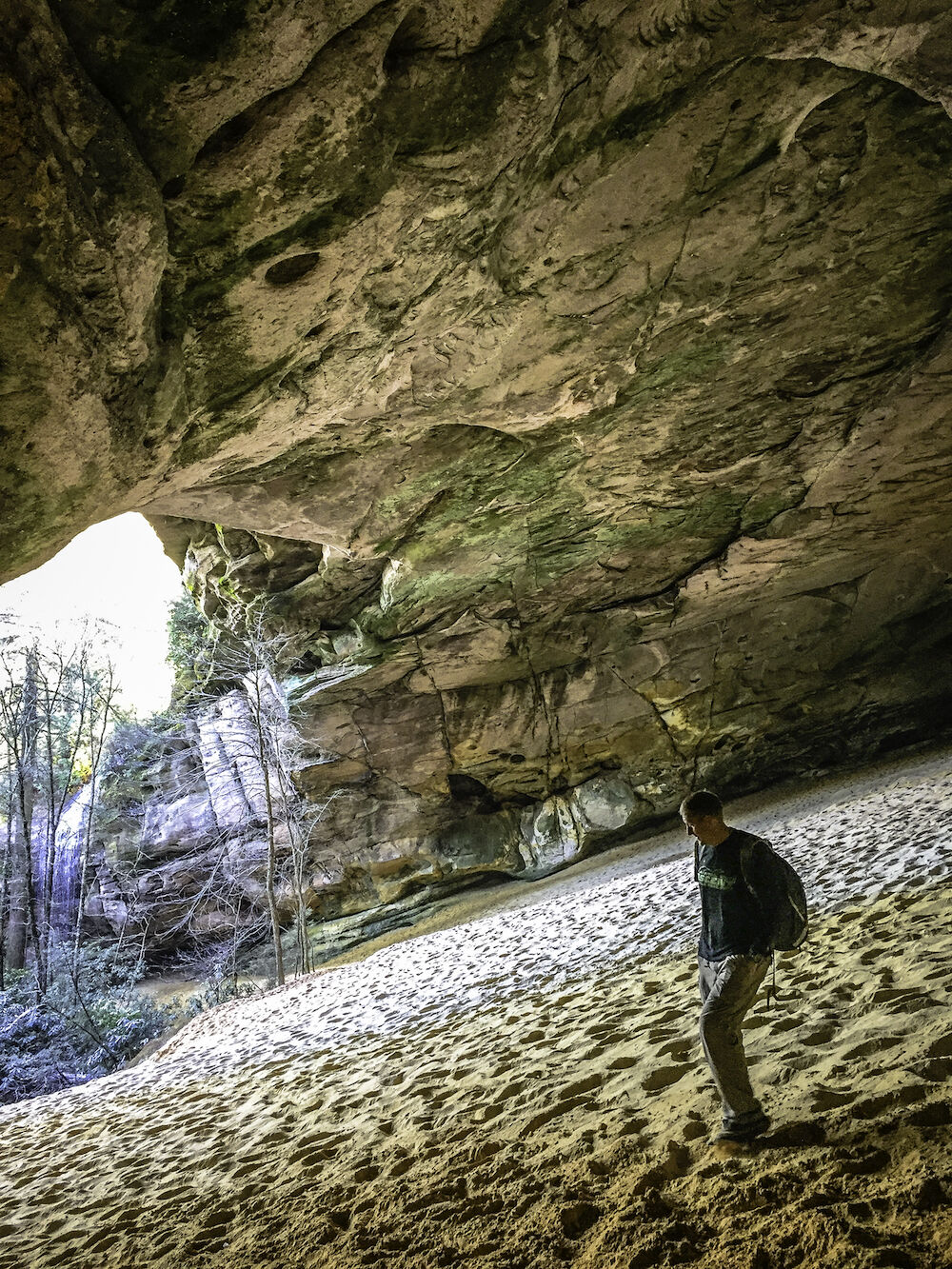 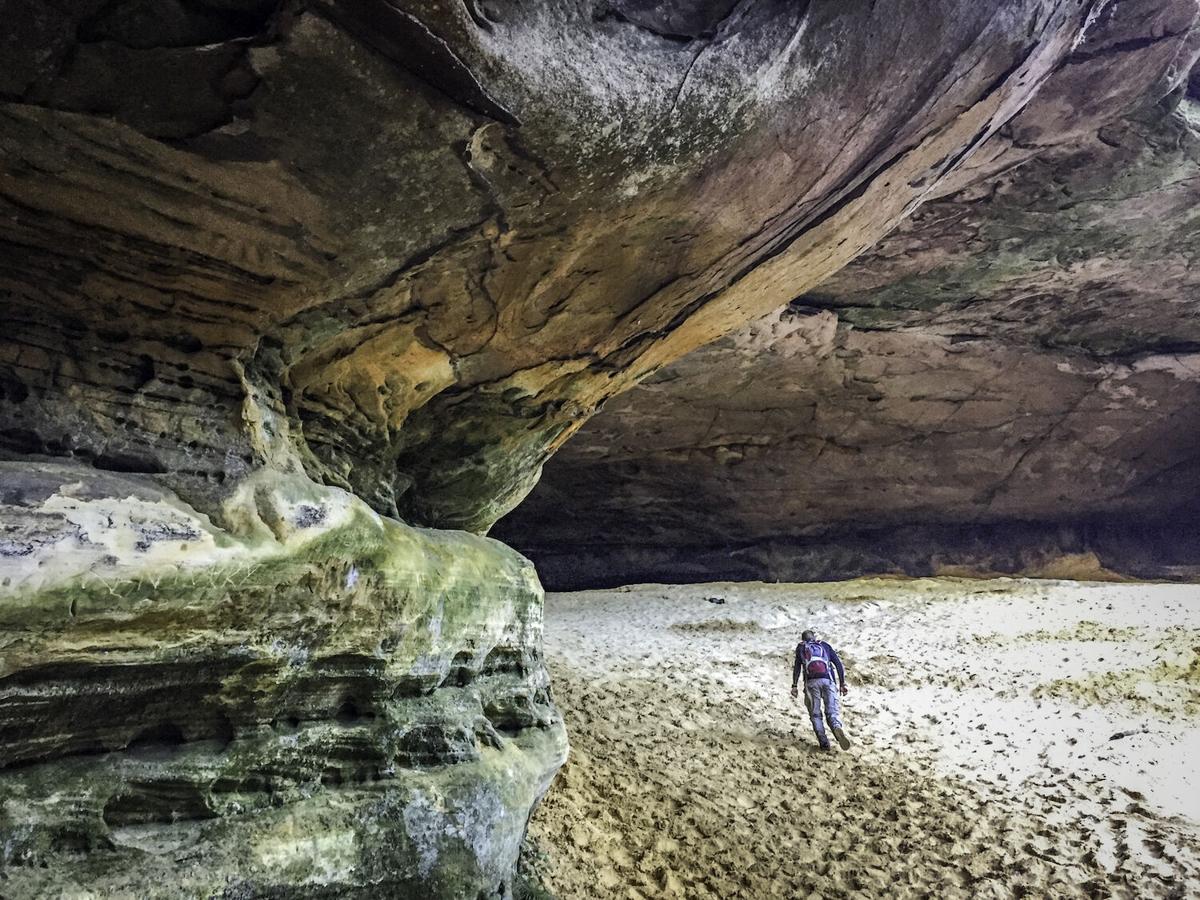 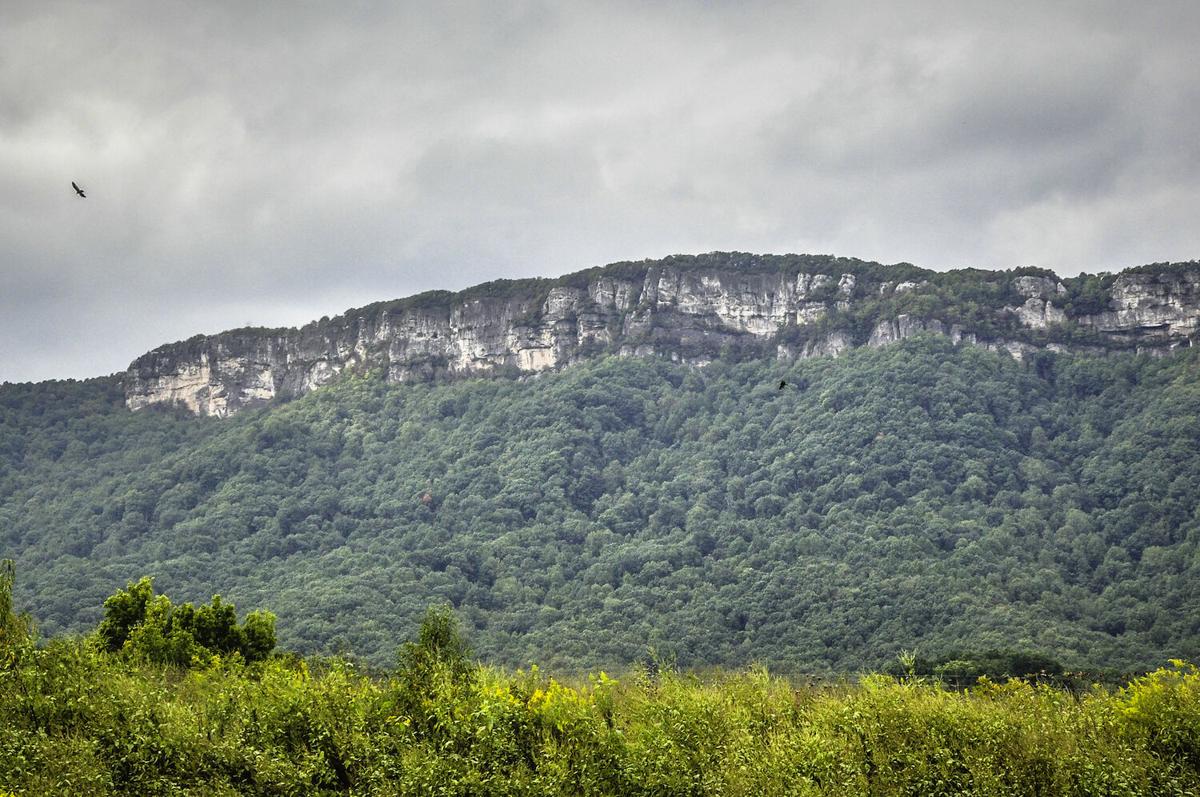 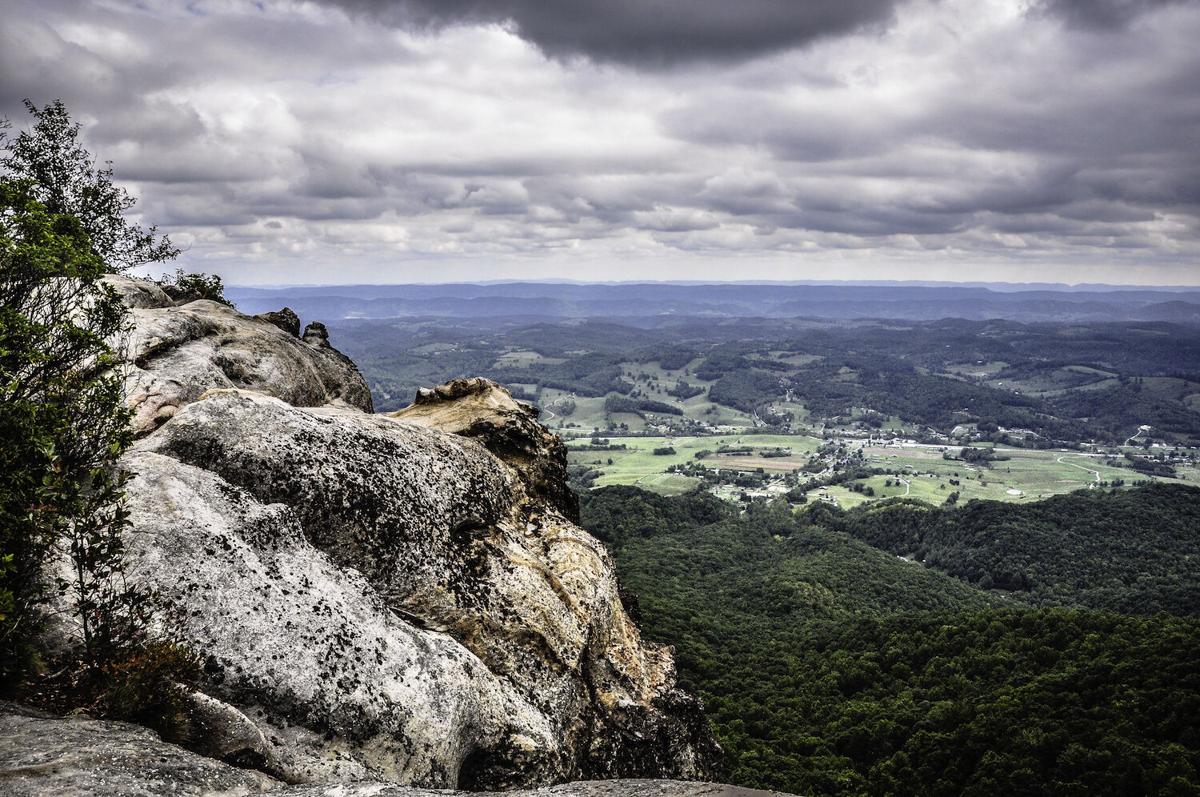 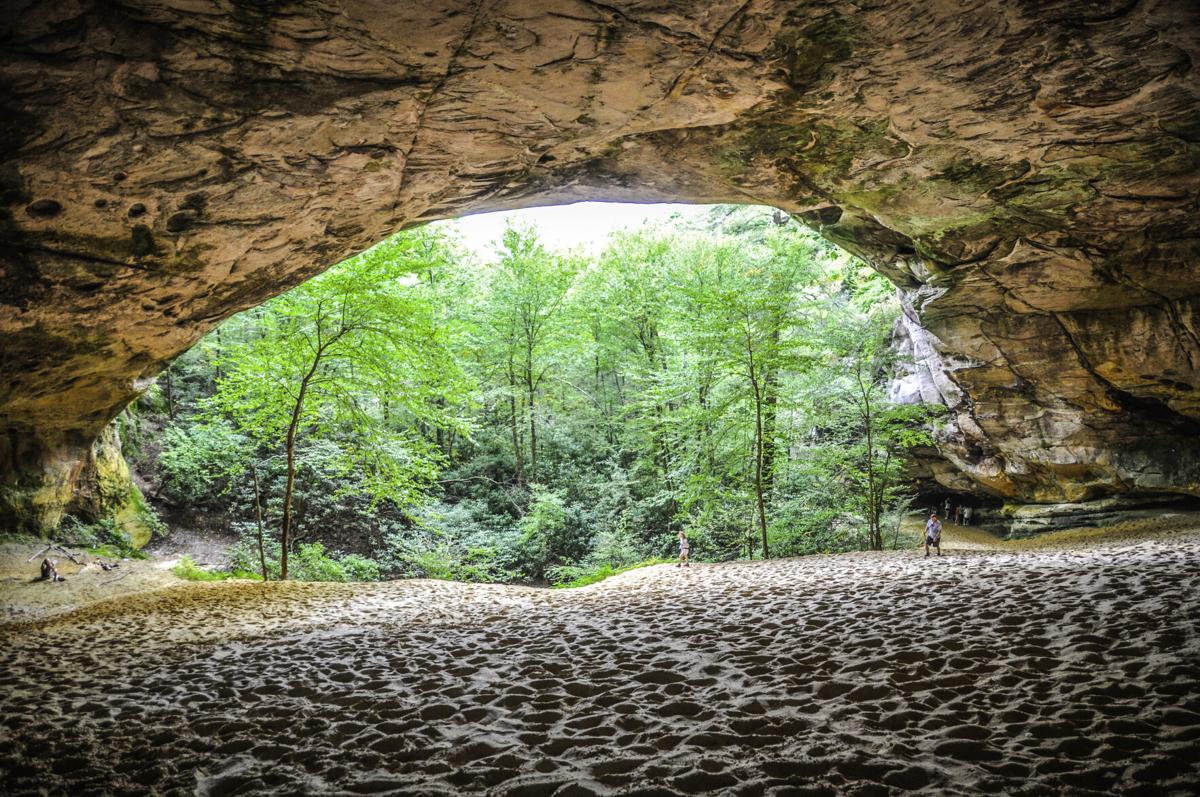 Beautiful swirls and striations on the walls of Sand Cave

The waterfall at the Entrance of Sand Cave

What exactly classifies a hike as amazing? What makes it bucket-list worthy? Certainly it must have to check off a few boxes to earn those designations.

I think a captivating geological landform would be first on that checklist—a stunning waterfall, a unique rock formation, or any feature that may seem a little “out of place.” Most likely a sweeping vista is a requirement too. Throw in some historical significance, and you have the recipe for a hike you won’t soon forget.

We have one of these unforgettable treks in Southwest Virginia, near the Cumberland Gap and the town of Ewing. The two superstars of the hike are the formations of Sand Cave and White Rocks. Both can be visited in the same day by a strenuous nine-mile hike within the Cumberland Gap National Historic Park from the trailhead in the Thomas Walker Civic Park.

This is a challenging hike with a couple thousand feet of elevation gain, but the trails are well maintained and contain several switchbacks that make the climbing easier. I suggest making a loop out of this hike, visiting Sand Cave first, then continuing down the ridge to White Rocks.

Sand Cave is an exquisite and highly unusual site. It is not actually a limestone, water-eroded cave that we are used to in this area, but instead a huge rock overhang made of sandstone eroded by wind over the millennia.

As you near the cave, the trail drops into an area with a sand-lined, crystal- clear brook.

This alcove is enclosed by bright green rhododendrons and hemlocks, providing a beautiful contrast to the stream. At the entrance of the cave, there is a small waterfall cascading from high above the eastern opening. From inside, the waterfall fills the vast chamber with melodic echoes.

The entire room is well over an acre in size. In order to truly get the full effect of its enormity and beauty, climb to the top of the back wall. The dry, deep sand will make for some tough exploring, but it is worth it.

There is a palette of color in this cavern, from the many shades of sand on the floor to the unique swirls and striations all over the walls and ceiling.

After visiting Sand Cave, follow the main ridge of the Cumberland Mountain (which happens to be the Kentucky/Virginia border), to a short but very steep trail leading to the imposing cliffs of White Rocks. These massive bluffs were named for the quartzite pebbles imbedded in the sandstone, giving them a white, shiny appearance from the valley below.

There are some handhold climbs on the short trail that ascends a narrow crevice, but nothing overly difficult if you take your time. Once at the top, breathtaking views open up, overlooking the historic Powell River Valley of Virginia, and on into Tennessee and Kentucky. You can see for miles, and on a clear day, many peaks in the Great Smoky Mountains National Park are visible. Soak in the views and enjoy the achievement of climbing to this location.

The White Rocks cliffs once served as a landmark for early settlers who were traveling to the Cumberland Gap—the early gateway through the southern Appalachian Mountains.

In 1750, explorer and physician Dr. Thomas Walker “discovered” the Cumberland Gap, which was frequently used as a mountain passageway by Native Americans. In 1775, Daniel Boone led a group of men to widen the path through the gap for wagons, to ensure easier settlement of the western frontiers of Kentucky and Tennessee. This was eventually known as the Wilderness Road. It is said that Boone also used the White Rocks cliffs as a signpost to the gap.

It is estimated that around a quarter million settlers passed through the Cumberland Gap prior to 1810, on their way to Kentucky and the Ohio Valley. These massive cliffs must have been a pleasant site for these early travelers, as they were only a day’s walk away from the gateway to the western frontier.

The trailhead for Sand Cave and White Rocks is located at the Thomas Walker Civic Park in Ewing, Virginia. It can be a crowded trail so it is recommended to get there early, especially on weekends.

This is a nine-mile hike, rated as strenuous. Allow yourself an entire day for this excursion. Detailed driving and trail directions can be found at www.HikingBill.com. Search “Sand Cave.”