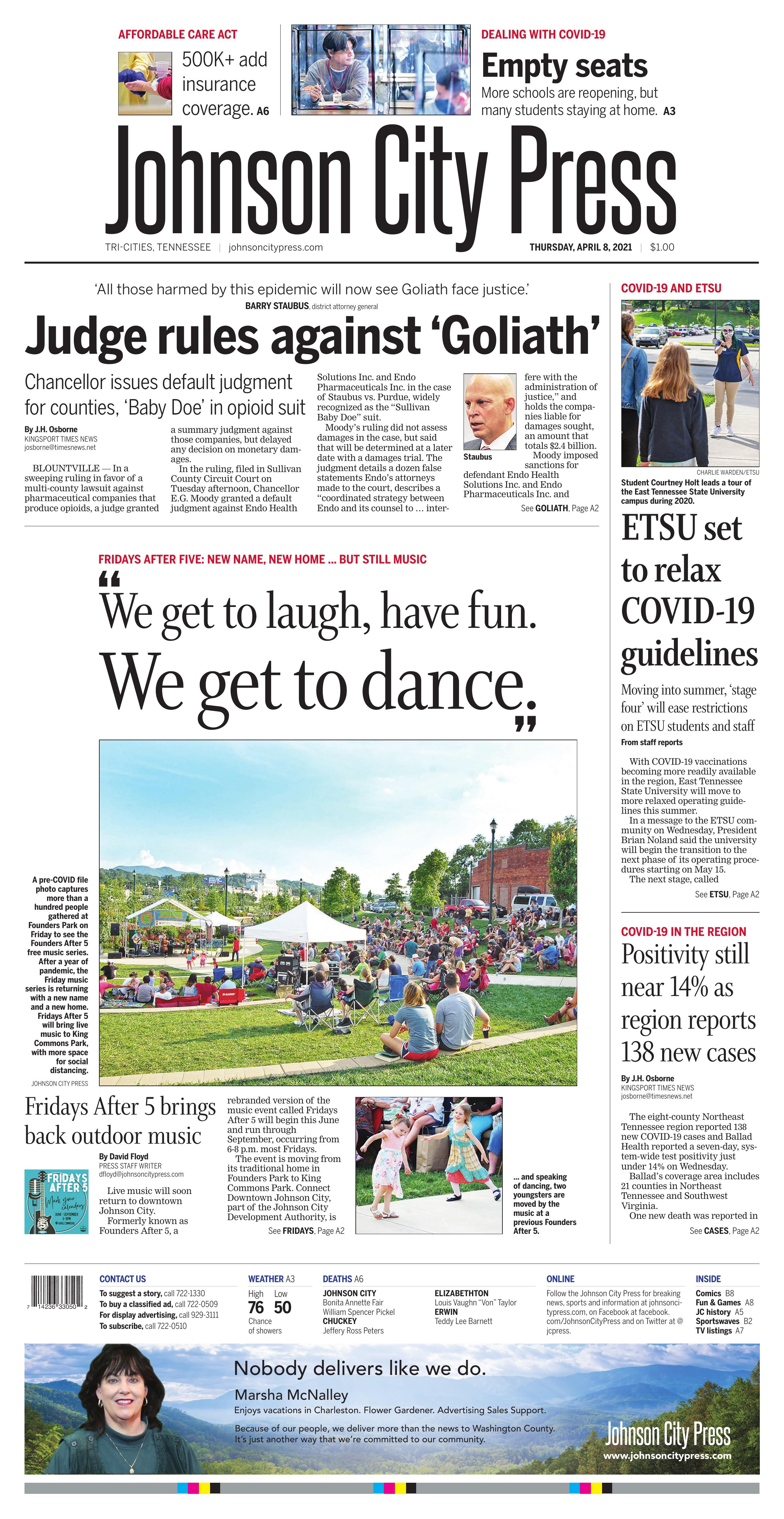 BLOUNTVILLE — In a sweeping ruling in favor of a multi-county lawsuit against pharmaceutical companies that produce opioids, a judge granted a summary judgment against those companies, but delayed any decision on monetary damages.

In the ruling, filed in Sullivan County Circuit Court on Tuesday afternoon, Chancellor E.G. Moody granted a default judgment against Endo Health Solutions Inc. and Endo Pharmaceuticals Inc. in the case of Staubus vs. Purdue, widely recognized as the “Sullivan Baby Doe” suit.

Moody’s ruling did not assess damages in the case, but said that will be determined at a later date with a damages trial. The judgment details a dozen false statements Endo’s attorneys made to the court, describes a “coordinated strategy between Endo and its counsel to … interfere with the administration of justice,” and holds the companies liable for damages sought, an amount that totals $2.4 billion.

The 31-page judgment goes into great detail about the lawsuit.

“It is obvious that monetary sanctions are not sufficient. Endo and its attorneys have not shown any remorse, admitted their wrongdoing or apologized to opposing counsel or to the court for their actions,” Moody wrote.

“Although this is a harsh sanction, justice demands it under the circumstances,” Moody’s order reads in part. “Anything less would make a mockery of the attorneys who play by the rules and the legal system.”

Staubus compared the fight to the biblical David and Goliath.

“For years we have worked to hold major opioid producers and distributors accountable for the long-term damage they have caused in our Tennessee communities,” Staubus said. “We understood from the start that seeking justice for those babies who were born drug-dependent and the rural areas that these companies victimized would constitute a fight on the level of David versus Goliath. All those harmed by this epidemic will now see Goliath face justice.”

As part of the national scrutiny brought to bear on opioid producers and distributors, due in part to Sullivan Baby Doe’s arguments, Purdue and Mallinckrodt have both declared bankruptcy, with claims proceeding against them in related courts. Endo remains the only active corporate defendant.

A partner in the law firm representing Baby Doe and participating cities and counties also weighed in on the ruling.

“After a four-year fight in which Endo has tried to delay, derail and subvert justice, the court has laid bare Endo’s attempts to put their thumb on the scale of justice,” said J. Gerard Stranch IV, managing partner of Branstetter, Stranch & Jennings. “The Court laid out their deceptive and predatory actions for the public to see. This includes a dozen false statements made by Endo and their attorneys and what the court describes as a ‘coordinated strategy to interfere with the administration of justice.’ As a result, Endo will finally be forced to account for their role in the widespread misery they have knowingly caused in rural counties throughout Northeast Tennessee, which have suffered devastating rates of addiction, overdose deaths and babies being born drug-dependent.

“We look forward to putting our $2.4 billion damage case to a jury and ultimately seeing funds returned directly to these small communities, which have borne the brunt of Endo’s focus on financial gain.”

Moody’s order granting default judgement cites as legal standard a section of Tennessee Rules of Civil Procedure under which “the trial court is expressly authorized to dismiss an action for failure to abide by discovery rules or court orders.”

The order also lists circumstances the Tennessee Court of Appeals had identified in which a default judgment is warranted and circumstance under which it is not.

Discovery, in legal proceedings, is the process of plaintiffs and defendants sharing information (such as witnesses and evidence) each side will present at trial.

Nearly a year ago, the court had already held Endo and its lawyers in contempt of court for failing to produce documents in response to plaintiffs’ discovery requests.

Some key points regarding discovery from Moody’s order:

• “The court is especially concerned about the many false statements to plaintiffs’ counsel and to the court by the Endo defendants’ attorneys in the course of the discovery process.”

• Noting that Endo “repeatedly tried to characterize its discovery misconduct as a simple ‘misunderstanding’ between plaintiffs’ counsel and defense counsel” in the discovery process, Moody’s order states “the record demonstrates otherwise. It is clear to the court that Endo and its counsel at Arnold & Porter willfully withheld responsive records and many of the records that Endo knowingly withheld were highly relevant.”

• “It is apparent that Endo intended to defend itself at trial by touting its anti-diversion measures, while simultaneously depriving plaintiffs of evidence that would have undercut that defense. Accordingly, the court finds that Endo willfully withheld this information during the discovery phase to gain a litigation advantage at trial.”

• The order states “it is obvious monetary sanctions are not sufficient,” regarding what it outlines as Endo’s pattern of discovery misconduct.

• “Endo and its attorneys have not shown any remorse, admitted their wrongdoing or apologized to opposing counsel or the court for their actions,” the order states. “For all these reasons, the court hearby enters a default judgement in favor of plaintiffs.”

• Additional sanctions issued by the court include awarding plaintiff costs and fees.

Pro hac vice is a legal term used to indicate a lawyer has been allowed to participate in a case in a particular jurisdiction where the lawyer otherwise is not been admitted to practice.

FILE -- In this pre-COVID file photo, over a hundred people gathered at Founders Park on Friday to see the Founders After 5 free music series.

FILE -- A group of dancers dance the evening away to music by the Chuck Johnson And Charlyhorse Band for the first Friday of Founders after 5. 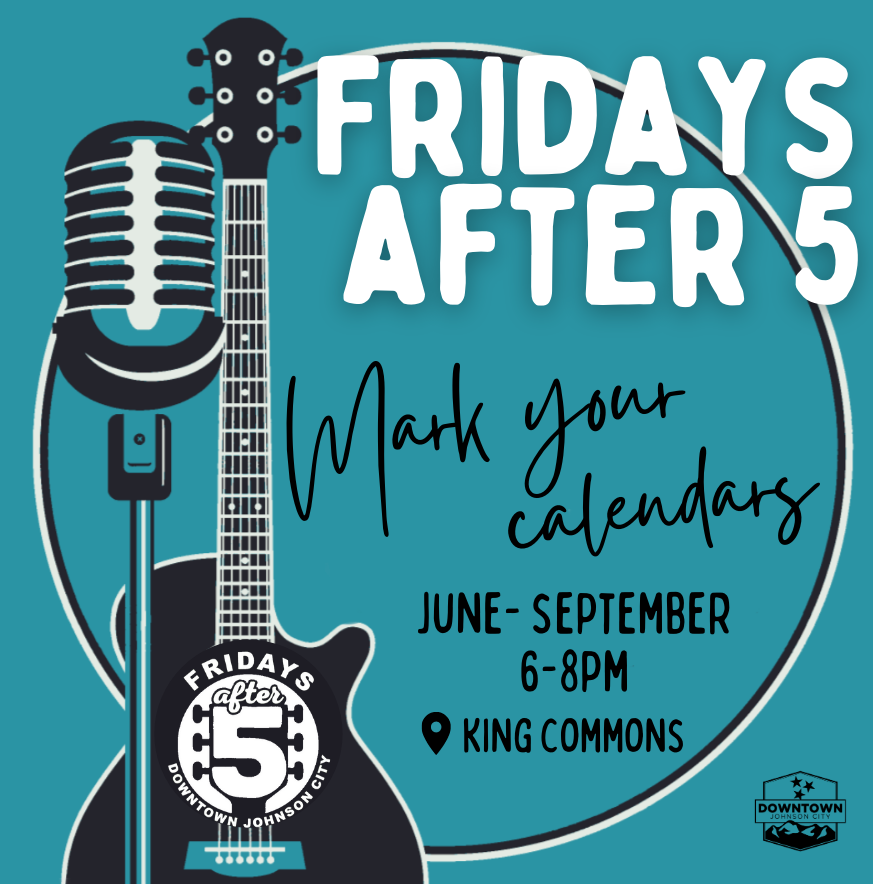 Formerly known as Founders After 5, a rebranded version of the music event called Fridays After 5 will begin this June and run through September, occurring from 6-8 p.m. most Fridays.

The event is moving from its traditional home in Founders Park to King Commons Park. Connect Downtown Johnson City, part of the Johnson City Development Authority, is organizing the event.

Lindsey Jones, the authority’s marketing manager, said Founders After 5 could get fairly busy, typically seeing an average of 500 to 600 people in attendance each week.

“We’re expecting after a year of no fun in 2020 that people are going to be eager to get out, listen to live music again,” Jones said, “so we’re expecting larger crowds than normal.”

Jones said the move to King Commons Park will give attendees more space to stay socially distant, but it also allows the event more room to grow.

She added that organizers will have sanitizing stations available to attendees as well as multiple beer lines as opposed to a single tent. Face masks will be encouraged, especially while standing in beer or merchandise lines.

Musical acts will include 49 Winchester and The Broadcast. The Breakfast Club will perform during an ’80s-themed night.

With the exception of evenings when other festivals are occurring downtown, the event will happen most Fridays. The events will be held from June 4 through Sept. 24 over the course of 13 weeks.

“It’s a way of having some normalcy again, but it’s also going to be an added benefit for our community,” Jones said.

“We get to laugh, have fun,” she said. “We get to dance. When’s the last time you were able to dance and listen to music around people and friends?”

Organizers of another downtown event, the Blue Plum Festival, announced in February that they wouldn’t host the annual festival this year out of concern about the COVID-19 pandemic.

The organization is instead offering $20,000 worth of small grants to “support public programs, events and initiatives that stimulate art, music and culture in Downtown Johnson City.”

The city of Johnson City plans to begin a multi-phased reopening of its recreational facilities — the Memorial Park Community Center, the Carver Recreation Center and the Langston Centre — on April 12.

With the COVID-19 vaccine becoming more available, ETSU will move to modified stage four of its operating guidelines this summer.

With the COVID-19 vaccine becoming more available, ETSU will move to modified stage four of its operating guidelines this summer.

In a message to the ETSU community on Wednesday, President Brian Noland said the university will begin the transition to the next phase of its operating procedures starting on May 15.

The next stage, called “modified stage four,” will be complete by July 1.

“News of expanded access to the COVID-19 vaccine brings renewed hope to our campus and our nation as we make plans to move forward from the pandemic,” Noland wrote. “Throughout these challenging times, our priority has always been ensuring the health and safety of our campus and our community.”

This decision, Noland said, was made based on guidance from the university’s senior leadership team and its medical response team.

Highlights of this new stage include:

• The majority of academic instruction starting in fall 2021 will take place in person.

• Employees primarily will be working on campus.

• At this time, the current face-covering policy will remain in effect, regardless of vaccination status.

• Laboratory and on-campus experiential learning will be permitted.

• Field research, laboratory and service activities will be allowed but should adhere to appropriate physical distancing measures.

• Athletic competitions will continue to follow guidelines issued by the NCAA and the Southern Conference, and those involving spectators will require an event safety plan.

• Large university events will be allowed and should have appropriate physical distancing measures.

More information about the plan is available on the university’s Bucs are Back webpage: www.etsu.edu/coronavirus.

The university will hold a Town Hall meeting at 1:30 p.m., April 20 via Zoom to discuss ETSU’s operating status for July 1 and the fall 2021 semester.

Noland said the university’s leadership team will work with the Strong Brain Institute to provide resources for faculty, staff and students struggling with the transition to a new operating phase.

“It is imperative to underscore that this transition is contingent on several factors, including the continued availability of vaccines, ongoing improvement in the number of cases, and individuals’ adherence to the safety measures that are in place,” Noland wrote.

One new death was reported in Washington County.

Numbers from the Tennessee Department of Health’s daily report for Wednesday:

• One new death (in Washington County) and 138 new cases for the eight-county region.

Statewide: 5.82% of the 17,977 new test results reported statewide on Wednesday by the Tennessee Department of Health.

Ballad Health: As of Wednesday, 13.9% over the prior seven days for the health system’s 21-county service area.

Sullivan County: 37 average new cases over the past seven days (the number was 30 on March 7).

The seven other counties of Northeast Tennessee: 83 average new cases over the past seven days (the number was 39 on March 7).

Numbers of vaccine doses given by county, to date, in Northeast Tennessee, (and percentage of that county’s population who have completed doses required), according to the TDH website as updated on Friday: