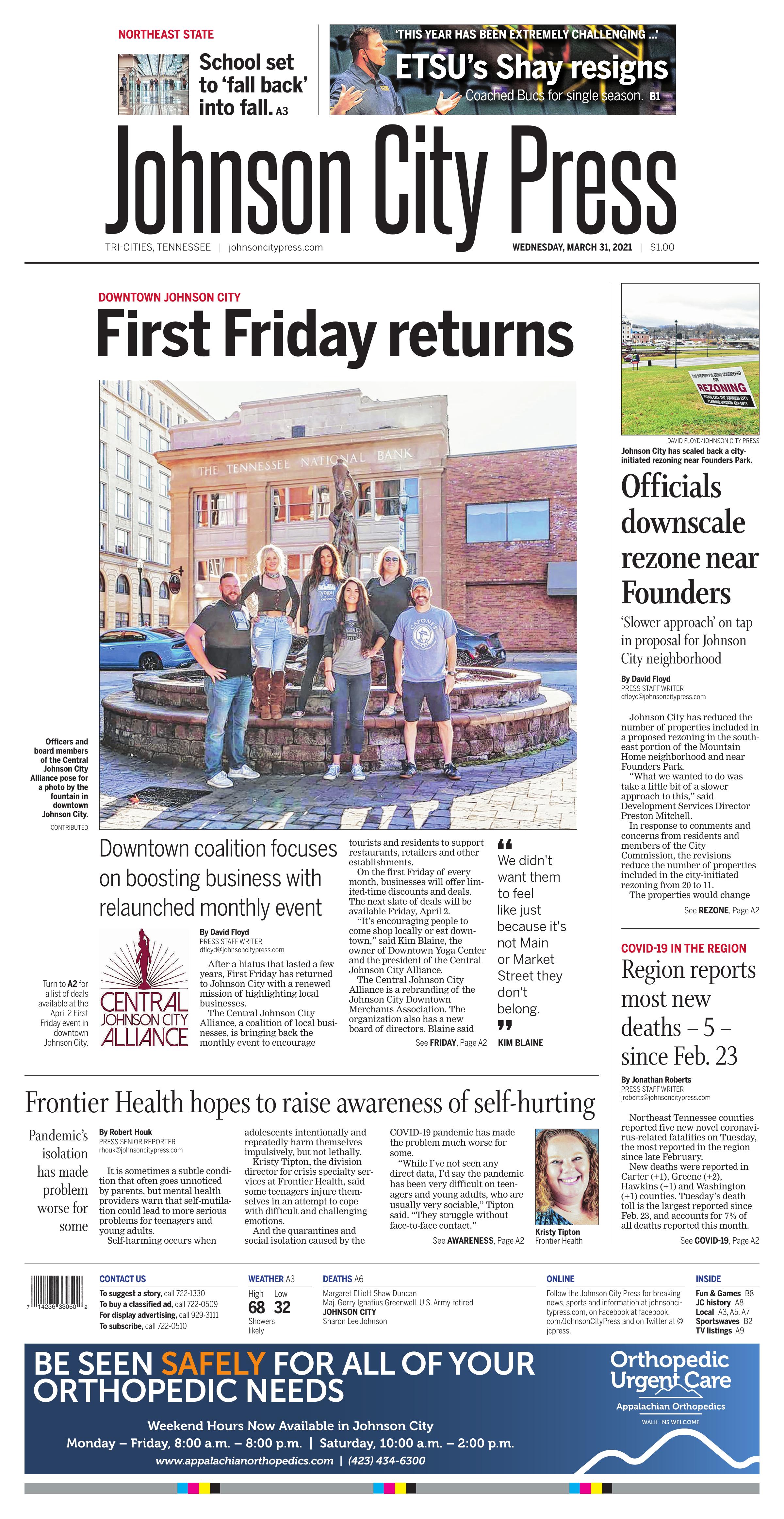 Officers and board members of the Central Johnson City Alliance pose for a photo by the fountain in downtown Johnson City.

The logo for the Central Johnson City Alliance

Kim Blaine, the owner of Downtown Yoga Center, is the president of the Central Johnson City Alliance.

A map showing the area covered by the Central Johnson City Alliance.

After a hiatus that lasted a few years, First Friday has returned to Johnson City with a renewed mission of highlighting local businesses.

The Central Johnson City Alliance, a coalition of local businesses, is bringing back the monthly event to encourage tourists and residents to support restaurants, retailers and other establishments.

On the first Friday of every month, businesses will offer limited-time discounts and deals. The next slate of deals will be available Friday, April 2.

Blaine said leaders hope the changes can re-energize the organization, adding that the group’s new name reflects a desire to be more inclusive to businesses outside the immediate downtown area.

“We didn’t want them to feel like just because it’s not Main or Market Street they don’t belong,” Blaine said.

Although there may be some musicians and artists in the downtown area, Blaine said First Fridays won’t serve as a street party.

The focus will be on helping businesses. She added that the deals businesses offer will help complement some of the other events that occur downtown.

In years past, Blaine said, hosting First Fridays as a street party could be difficult to manage. As a downtown business owner, she recalls that attendance could also be low at times.

In a press release, the Central Johnson City Alliance said bringing back First Fridays is the first step towards connecting local businesses with citizens and tourists. As the organization continues to develop, they plan to create “impactful bonds, add more businesses and create new opportunities to shop local.”

“Our mission is to promote a positive image of downtown and promoting it as an exciting place to live, shop, and invest,” the organization said. “We are planning promotions and increasing our interaction with the public by sustaining and improving the appearance of downtown; and by strengthening and expanding the economic base of the Johnson City downtown area.”

Blue Willow Bridal – Sarah Sykes Photography – Heartstrings Videography: Bubbles, cameras, dresses, drink up and dress up. Businesses will be offering customers a chance to put on gowns with their friends and get group and individual pictures taken in the studio; 5-8 p.m.

Into the Fire: BOGO studio fees

Kristy Tipton is the division director for crisis specialty services at Frontier Health.

Frontier Health's Turning Point facility in Johnson City has remained open during the pandemic to meet the needs of people dealing with mental health and substance abuse issues.

It is sometimes a subtle condition that often goes unnoticed by parents, but mental health providers warn that self-mutilation could lead to more serious problems for teenagers and young adults.

Self-harming occurs when adolescents intentionally and repeatedly harm themselves impulsively, but not lethally.

Kristy Tipton, the division director for crisis specialty services at Frontier Health, said some teenagers injure themselves in an attempt to cope with difficult and challenging emotions.

And the quarantines and social isolation caused by the COVID-19 pandemic has made the problem much worse for some.

“While I’ve not seen any direct data, I’d say the pandemic has been very difficult on teenagers and young adults, who are usually very sociable,” Tipton said. “They struggle without face-to-face contact.”

Frontier Health officials note most teens who self-harm say it is their way to cope with difficult or painful feelings they have that are often linked to past experiences with abuse, neglect or trauma.

March has been designated by mental health organizations across the country as a month to raise awareness about self-harm. During this time, Frontier Health and other mental health providers offer parents, teachers and other caregivers with advice for spotting self-harm.

The most common methods for self-harm include:

• Punching objects or oneself.

Signs that a teenager may be engaging in self-harm include:

• Excessive rubbing of an area to create a burn.

• Wearing long sleeves or long pants, even in hot weather.

Tipton said recognizing the symptoms of self-harm can often be difficult for parents. She said they should take note of changes in their child’s mood or behavior, such as a loss of interest in things they normally engage in and sleeping more than usual.

Although in most cases self-harm is not typically a suicide attempt, Tipton said it can cause medical complications and progress into more serious destructive behavior. She said parents and guardians should treat the behavior as a serious matter and not dismiss it as simply blowing off steam.

“This is a clear sign their emotional needs are not being met,” Tipton said.

Parents should consult school counselors and mental health providers, such as Frontier Health, for advice in offering teens with self-harm issues better coping methods. That includes getting them involved in more family, sports and outdoor activities.

They should also be encouraged to get together with friends more often.

If you suspect someone may be engaging in self-harm, Frontier Health urges you contact one of its mental health facilities (which can be found at frontierhealth.org/locations) or call its 24/7 crisis hotline at 1-877-928-9062.

A walk-in center is open 24/7 and available to adults and children 7 years and older at Frontier Health’s Turning Point location in Johnson City.

Johnson City has scaled back a city-initiated rezoning near Founders Park.

An updated map of the proposed rezoning near Founders Park and the Mountain Home neighborhood. The city has scaled back the number of properties included in the proposal.

The original map showing properties in the southeast portion of the Mountain Home neighborhood that would have been rezoned under the initial request. The revised rezoning would scale back the number of properties from 20 to 11.

Johnson City has reduced the number of properties included in a proposed rezoning in the southeast portion of the Mountain Home neighborhood and near Founders Park.

“What we wanted to do was take a little bit of a slower approach to this,” said Development Services Director Preston Mitchell.

In response to comments and concerns from residents and members of the City Commission, the revisions reduce the number of properties included in the city-initiated rezoning from 20 to 11.

Mitchell said the request is now limited to parcels that owners had expressly requested the city rezone, those that are city-owned and still have outdated industrial zoning, and properties that don’t conform with the underlying zoning.

The revised request would need to return to the planning board for review and then pass the City Commission on three readings.

As they developed the initial proposal, Mitchell said, city staff knew there were going to be a minimum number of parcels included in the rezoning request.

Mitchell said that as staff looked at the West Watauga Avenue corridor and the area around Founders Park, they saw an opportunity to apply mixed-use zoning in the area, a designation that the city recently amended.

“We do believe that there will be interest in allowing for some mixed-use here on the outer edges of Founders Park,” Mitchell said. “It’s just how much and when.”

At least one property owner has laid the groundwork for a project in the area around Founders Park. In February 2020, Michael Mansy purchased 316 S. Commerce St. from the city for $20,000. He also owns the adjacent property at 312 S. Commerce St.

Mansy has said he intends to build a new coffeehouse and bakery on the vacant property.

The city recently approved revisions to its mixed use (MX-1) zoning district. Officials removed confusing language from the ordinance, but they also cleaned up the list of permitted uses to focus more on “neighborhood-scale goods and services.” They also revised the language to make it more compatible with infill development.

The city will hold a neighborhood meeting about the proposed revisions to the rezoning request at 5:30 p.m. on April 6 at City Hall, 601 E. Main St. The Planning Commission will meet to discuss the proposal at 6 p.m. April 13.

Mitchell said a notice sent to residents listed the incorrect day for the neighborhood meeting. It’s occurring on Tuesday not Monday. The date, April 6, is correct.

He said the city’s planning department is aware of the error and is sending out corrected notices.

Northeast Tennessee counties reported five new novel coronavirus-related fatalities on Tuesday, the most reported in the region since late February.

New deaths were reported in Carter (+1), Greene (+2), Hawkins (+1) and Washington (+1) counties. Tuesday’s death toll is the largest reported since Feb. 23, and accounts for 7% of all deaths reported this month.

Since the first week of March, the region has not reported more than 10 deaths in a single week.

Greene and Hawkins counties have each reported two deaths in the past week, while Sullivan County has added seven new hospitalizations over that time.

Vaccines are available to anyone 16 or older, and you can book an appointment at vaccinate.tn.gov. If you need assistance, call the Northeast Regional COVID-19 Registration Line at (423) 979-4689 Monday-Friday from 8 a.m. to 4:30 p.m.

There is another vaccine event planned for Thursday at the same site from 9 a.m. to 2 p.m. and 3:30 to 6:30 p.m. There are also vaccination events planned in Elizabethton (Wednesday) and Surgoinsville (Thursday), with neither requiring an appointment. Those locations are: