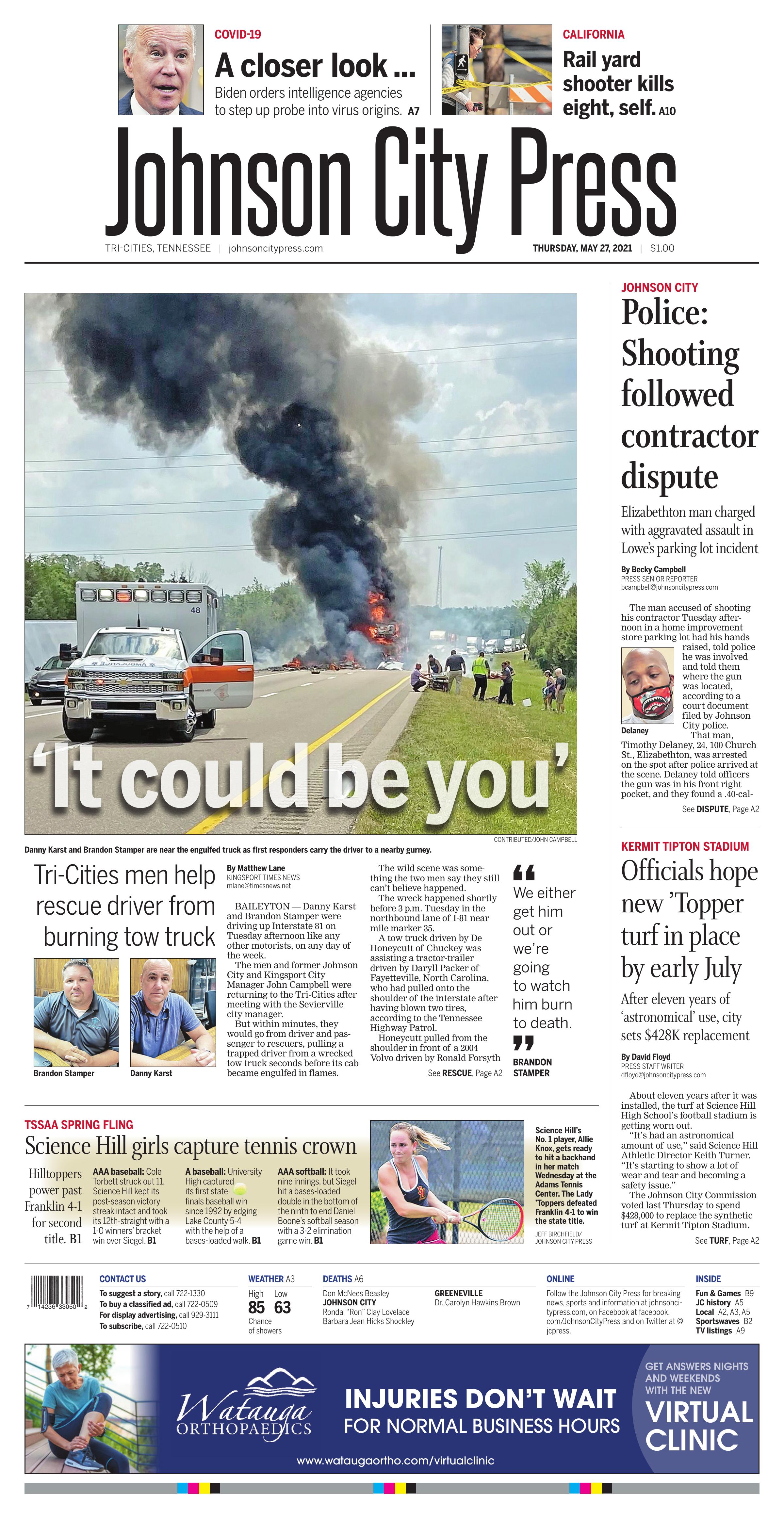 BAILEYTON — Danny Karst and Brandon Stamper were driving up Interstate 81 on Tuesday afternoon like any other motorists, on any day of the week.

The men and former Johnson City and Kingsport City Manager John Campbell were returning to the Tri-Cities after meeting with the Sevierville city manager.

But within minutes, they would go from driver and passenger to rescuers, pulling a trapped driver from a wrecked tow truck seconds before its cab became engulfed in flames.

The wild scene was something the two men say they still can’t believe happened.

The wreck happened shortly before 3 p.m. Tuesday in the northbound lane of I-81 near mile marker 35.

A tow truck driven by De Honeycutt of Chuckey was assisting a tractor-trailer driven by Daryll Packer of Fayetteville, North Carolina, who had pulled onto the shoulder of the interstate after having blown two tires, according to the Tennessee Highway Patrol.

Honeycutt pulled from the shoulder in front of a 2004 Volvo driven by Ronald Forsyth of Woodbury, New Jersey. The vehicles collided, with the tow truck coming to rest in the middle of the road.

“I saw the accident happen and stuff was flying in the air,” Karst said. “We drove by it and by the time we went by, somebody was already trying to get in the truck to help (Honeycutt). There was a small fire burning and we could see fuel.”

Once Karst pulled past the accident, he and Stamper got out and went to the truck’s cab. It was crumpled up in the collision and Honeycutt was lying half-in and half-out, with his legs stuck underneath the seat.

“You could see it was starting to catch fire and two other people were trying to pull him out. He was hung up and they couldn’t get him loose,” Stamper said, adding that he grabbed Honeycutt under the arms, while others pulled him from his waist and legs.

“By that time the back of the cab had caught fire. At this point, it was ... we either get him out or we’re going to watch him burn to death.”

Soon after, the four men pulled Honeycutt from the cab and into the grass about 150 feet away from the burning vehicle. About 45 seconds later, Karst and Stamper said the vehicle was engulfed.

“It pops into your mind as it’s going on, do I really want to do this?” Stamper said. “At the same time, I would hope someone would do the same thing for me, a family member or loved one ... do what they could to save someone in that situation.”

Karst said the whole situation was surreal, and doesn’t believe he and Stamper could have pulled Honeycutt out of the cab by themselves.

“I believe it’s self-protection to do that. You’re living what he’s living, so you want to go get him out because it could be you in that situation,” Karst said.

The man accused of shooting his contractor Tuesday afternoon in a home improvement store parking lot had his hands raised, told police he was involved and told them where the gun was located, according to a court document filed by Johnson City police.

That man, Timothy Delaney, 24, 100 Church St., Elizabethton, was arrested on the spot after police arrived at the scene. Delaney told officers the gun was in his front right pocket, and they found a .40-caliber Glock handgun there.

No new details were revealed during the short appearance.

He’s accused of shooting Joshua White, a man who had done some construction work for Delaney.

According to police, the two men were inside Lowe’s Home Improvement, 180 Marketplace Blvd., around 4:40 p.m. buying supplies for the project.

“White requested to be paid for work already completed, but Delaney did not want to pay White until the work was reviewed,” JCPD Detective Johnnie Willis wrote in the affidavit filed in court.

“White continued to ask for payment and the confrontation escalated to a shoving match. White and Delaney were separated and Delaney began making his way to his vehicle. White followed Delaney and continued to demand payment.

“Once at Delaney’s vehicle, Delaney produced a handgun and ultimately fired one shot at White, striking him in the left thigh.”

Delaney was charged with aggravated assault and taken to jail. He was released on a $25,000 bond later Tuesday night.

JCPD Lt. Don Shepard said Wednesday that White was in surgery, and no other information would be released until after that’s completed.

About eleven years after it was installed, the turf at Science Hill High School’s football stadium is getting worn out.

“It’s had an astronomical amount of use,” said Science Hill Athletic Director Keith Turner. “It’s starting to show a lot of wear and tear and becoming a safety issue.”

The Johnson City Commission voted last Thursday to spend $428,000 to replace the synthetic turf at Kermit Tipton Stadium. Commissioners opted to hire Sprinturf LLC to conduct the project, which had the lowest base bid among five contractors. The new turf is also designed to help lower the temperature on the field.

According to a staff report included with the commission’s agenda on May 20, Sprinturf expects production and delivery to occur from June 7 to July 2. Onsite removal and replacement could take about four weeks, lasting from around July 5 to July 30.

Sprinturf anticipates it will take about a week to remove the turf and another three weeks to install it.

“Certainly one can always hope a project could be completed sooner than estimated, but that cannot be a certainty,” Assistant City Manager Charlie Stahl said.

Turner is hopeful that the turf can be installed sooner than late July. The school’s football team has a dead period that lasts from the last week of June through the first week of July, and he hopes the project can wrap up during that period.

Typically, Turner said, 10 years is a good amount of time to get out of turf. Numerous organizations and students have used the stadium over the years, including youth football teams, semi-pro soccer players and the East Tennessee State University football team before the university’s stadium was finished in 2017.