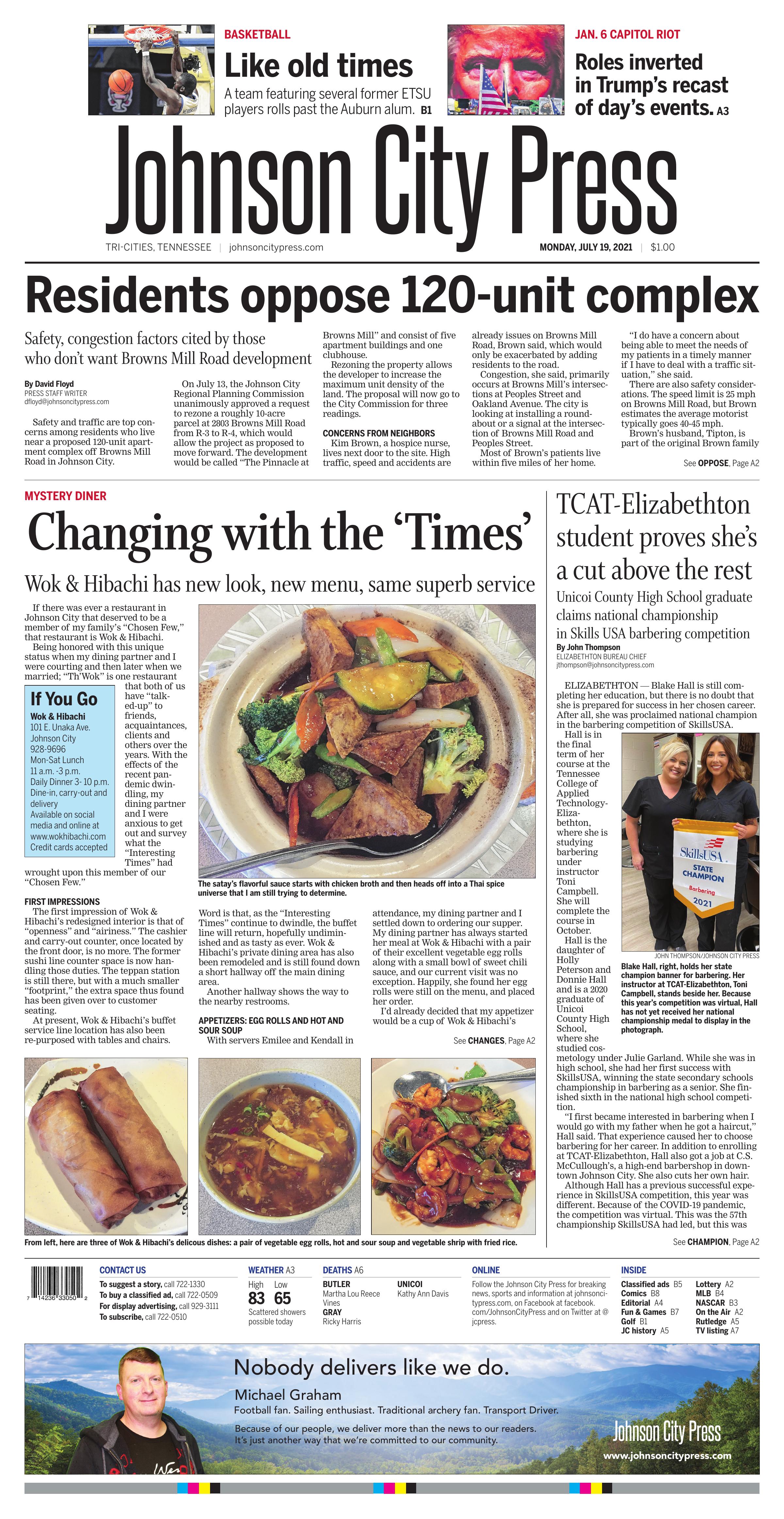 The Johnson City Regional Planning Commission approved a request on July 13 to rezone property at 2803 Browns Mill Road from R-3 to R-4 for the construction of an apartment complex. The request will now go to the City Commission for consideration on three readings.

Safety and traffic are top concerns among residents who live near a proposed 120-unit apartment complex off Browns Mill Road in Johnson City.

On July 13, the Johnson City Regional Planning Commission unanimously approved a request to rezone a roughly 10-acre parcel at 2803 Browns Mill Road from R-3 to R-4, which would allow the project as proposed to move forward. The development would be called “The Pinnacle at Browns Mill” and consist of five apartment buildings and one clubhouse.

Rezoning the property allows the developer to increase the maximum unit density of the land. The proposal will now go to the City Commission for three readings.

Kim Brown, a hospice nurse, lives next door to the site. High traffic, speed and accidents are already issues on Browns Mill Road, Brown said, which would only be exacerbated by adding residents to the road.

Most of Brown’s patients live within five miles of her home.

“I do have a concern about being able to meet the needs of my patients in a timely manner if I have to deal with a traffic situation,” she said.

There are also safety considerations. The speed limit is 25 mph on Browns Mill Road, but Brown estimates the average motorist typically goes 40-45 mph.

Brown’s husband, Tipton, is part of the original Brown family from which the road gets its name. Kim Brown wants to see the vacant property at 2803 Browns Mill Road developed in some manner. Although single-family homes would be great, a two-story project would be fine, Brown said. Three-stories, however, is too much.

“I’m opposed to having a three-story (building) beside my 1926 farm house,” she said. “Because then that is going to make my property value go down.”

The developer of the project, Rick Gentry, said he instructed his architect Friday to make the apartments blend in with the architecture of the surrounding neighborhood.

A series of neighbors shared concerns similar to Brown’s during the planning commission meeting and sent emails to members urging them to reject the proposal.

“That property needs to be developed,” Brown told the Press. “It doesn’t need to be vacant. Someone needs to be taking care of it, but to put that volume of people and three stories is out of character for that neighborhood.”

Residents also pointed out that there can be limited sight lines at points along Browns Mill Road, which makes turning onto the roadway and backing out of driveways precarious. They’re concerned added traffic on the street would intensify that problem. City staff indicated they would take a look at the road conditions to see if anything could be done.

Staff determined there has been roughly eight accidents along Browns Mill Road between Oakland and Peoples since 2013.

Browns Mill Road is classified as a collector street and can handle a maximum of 12,000 vehicle trips per day. Currently, city staff say the roadway sees about 2,000 trips a day, which has been the case for several years.

The apartment complex would add about 700 trips, which staff notes is still far from the maximum load of the roadway.

Pindzola said the city wouldn’t consider upgrading the road until it sees traffic volumes reach about 9,000 trips per day.

“That will never happen on this road,” he said, stating that there are limited options for growth in the neighborhood.

The city is requiring Gentry to construct a right-turn deceleration lane into the apartment complex. Additionally, planning commissioners approved the rezoning proposal with the stipulation that the deceleration lane be long enough to accommodate public transit and school buses that need to pull off the road. Gentry will also construct public sidewalks on his frontage along Browns Mill Road.

“This is a tough site because all of the ‘easy’ sites in the city are gone,” said Development Services Director Preston Mitchell. “Many developers are finding that the infill sites that are left are difficult.”

Overall, Mitchell said, planning staff and city leaders are focused on helping Johnson City grow in a way that mitigates and minimizes its impact on the surrounding community.

Gentry pointed out that state law prevents Johnson City from annexing property without permission from the owner, which means development has to look inward.

“The only thing they can do is develop what they’ve got within the city limits to continue to provide services to the community,” Gentry said.

The satay’s flavorful sauce starts with chicken broth and then heads off into a Thai spice universe that I am still trying to determine.

From left, here are three of Wok & Hibachi’s delicous dishes: a pair of vegetable egg rolls, hot and sour soup and vegetable shrip with fried rice.

Wok & Hibachi’s hot & sour soup is thick, savory and has just the right level of sour flavor to brighten the dish and make your taste buds sparkle.

If there was ever a restaurant in Johnson City that deserved to be a member of my family’s “Chosen Few,” that restaurant is Wok & Hibachi.

Being honored with this unique status when my dining partner and I were courting and then later when we married; “Th’Wok” is one restaurant that both of us have “talked-up” to friends, acquaintances, clients and others over the years. With the effects of the recent pandemic dwindling, my dining partner and I were anxious to get out and survey what the “Interesting Times” had wrought upon this member of our “Chosen Few.”

The first impression of Wok & Hibachi’s redesigned interior is that of “openness” and “airiness.” The cashier and carry-out counter, once located by the front door, is no more. The former sushi line counter space is now handling those duties. The teppan station is still there, but with a much smaller “footprint,” the extra space thus found has been given over to customer seating.

Another hallway shows the way to the nearby restrooms.

With servers Emilee and Kendall in attendance, my dining partner and I settled down to ordering our supper. My dining partner has always started her meal at Wok & Hibachi with a pair of their excellent vegetable egg rolls along with a small bowl of sweet chili sauce, and our current visit was no exception. Happily, she found her egg rolls were still on the menu, and placed her order.

I’d already decided that my appetizer would be a cup of Wok & Hibachi’s delicious hot and sour soup ($2.75), absolutely scrumptious and my way to start a meal. The broth is thick, savory and has just the right level of sour flavor to brighten the dish and make your taste buds sparkle.

I’ve found a new and delicious way to eat my vegetables. My entrée for the evening was from Wok & Hibachi’s Thai menu, being their Satay Tofu Vegetables Hot Pot ($10.95). The satay’s flavorful sauce starts with chicken broth and then heads off into a Thai spice universe that I am still trying to determine. One thing for sure, tofu never tasted better, especially when combined with locally sourced and prepared vegetables and some delicious fried rice as a foundation for my plate. Very nice indeed.

Meanwhile, my dining partner, idly munching on her egg roll appetizer, was preparing to choose her entrée for the meal. This turned out to be a dinner-sized portion of the Vegetable Shrimp entree ($13.50). Beginning with Wok & Hibachi’s simmering brown sauce there are added broccoli florets, snow peas, carrots, onion, baby corn and a quantity of 21-count shrimp. The fried rice is a Wok & Hibachi specialty that is so good it could be ordered and enjoyed just on its own merits. Adding fried rice to the order of Vegetable Shrimp is a fortunate inspiration on someone’s part back in the kitchen, making the whole dish totally delicious from start to finish.

This is a truly great Asian-themed restaurant, one that Johnson Citians can be rightfully proud to call their own. The redesign on the restaurant is easy on the eye with a decor that cleverly balances comfort with a serenity most restaurateurs only dream about. The service provided by the wait staff is exemplary. (Thank you, Emilee and Kendall.)

On the menu, old favorites are being joined by new offerings, and not just in the entrée category. (For instance, my dining partner’s egg rolls are now available in a curry version, an appetizer that I am eager to try.)

Yes, Wok & Hibachi has survived their “Interesting Times,” all right.

It will be interesting to see whether the changes they’ve made to restaurant, service, and menu will brighten their future.

Worth a look (and a taste), wouldn’t you say?

Available on social media and online at 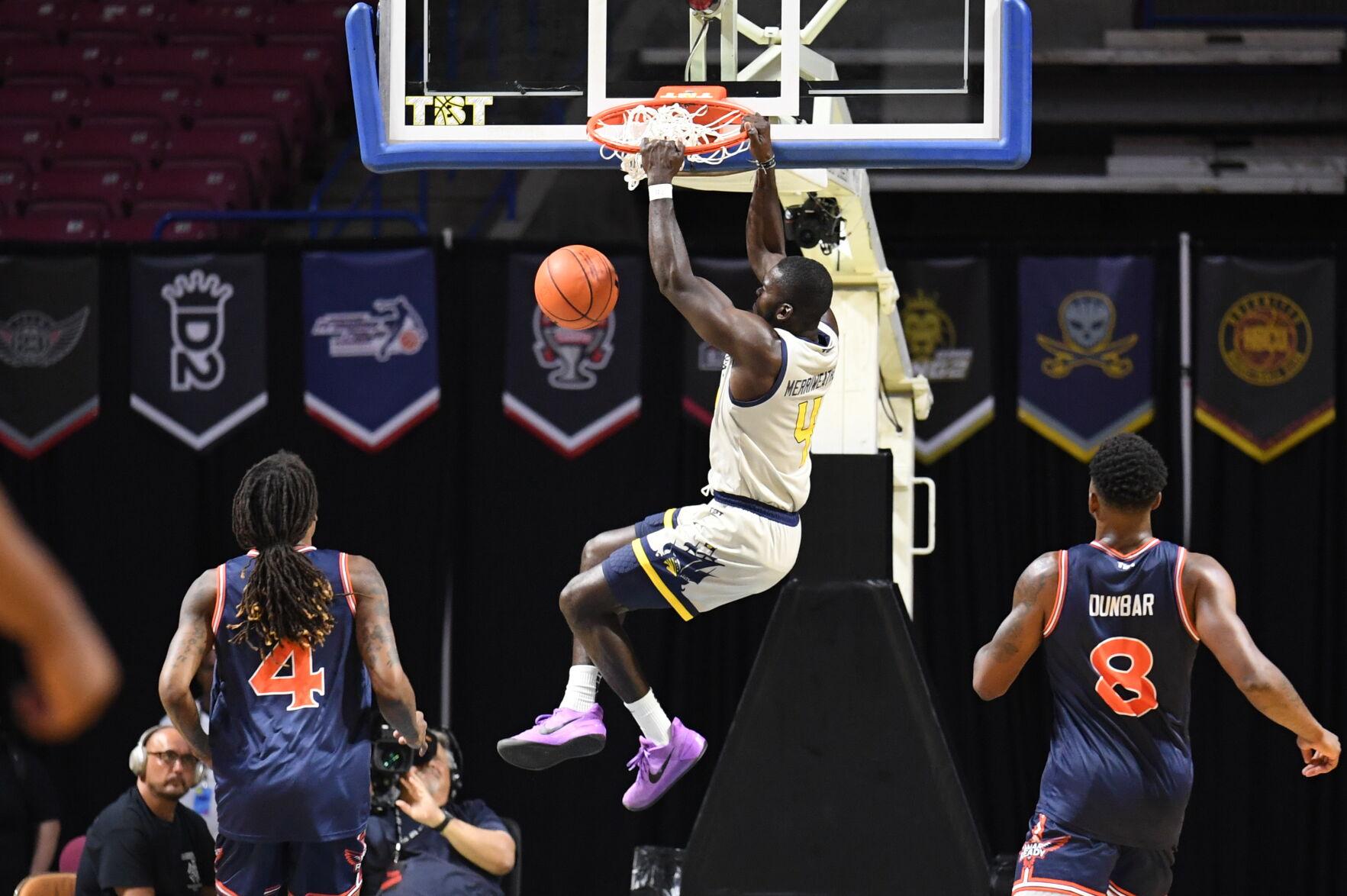 A.J. Merriweather was in a familiar place — around the rim.

Blake Hall, right, holds her state champion banner for barbering. Her instructor at TCAT-Elizabethton, Toni Campbell, stands beside her. Because this year’s competition was virtual, Hall has not yet received her national championship medal to display in the photograph.

ELIZABETHTON — Blake Hall is still completing her education, but there is no doubt that she is prepared for success in her chosen career. After all, she was proclaimed national champion in the barbering competition of SkillsUSA.

Hall is in the final term of her course at the Tennessee College of Applied Technology-Eliza-bethton, where she is studying barbering under instructor Toni Campbell. She will complete the course in October.

Hall is the daughter of Holly Peterson and Donnie Hall and is a 2020 graduate of Unicoi County High School, where she studied cosmetology under Julie Garland. While she was in high school, she had her first success with SkillsUSA, winning the state secondary schools championship in barbering as a senior. She finished sixth in the national high school competition.

“I first became interested in barbering when I would go with my father when he got a haircut,” Hall said. That experience caused her to choose barbering for her career. In addition to enrolling at TCAT-Elizabethton, Hall also got a job at C.S. McCullough’s, a high-end barbershop in downtown Johnson City. She also cuts her own hair.

The SkillsUSA Championship handbook took note of the difference from a normal year, saying “When we are in person, the SkillsUSA Championships is known as one of the largest hands-on workforce events in the world. In fact, the competition space allotted for the event encompasses more than 20 football fields and its all made possible by an estimated $36 million investment from business and industry.”

In another section, the handbook said “The way the SkillsUSA conducts our competitions might have temporarily changed as a result of the global pandemic, but one thing hasn’t: earning a medal at the SkillsUSA Championship is the same ‘kind-of-a-big-deal’ its always been.”

SkillsUSA said the barbering contest “is defined by industry standards as identified by the SkillsUSA Barbering technical committee and the National Barbering Association. The contest is divided into four separate skill performance tests, a written examination and an oral assessment.”

As part of the contest, Hall had to present her own hairstyle. She said she took inspiration from how crazy the year 2020 was. “It was a pompadour that I dyed a vivid green,” she laughed.

Now that she has won the national competition, Hall said there have been some job offers come her way. Right now, she is concentrating on finishing her course work.

When she is not working on her haircutting skills, Hall sad she enjoys painting and writing poetry. She said her inspiration in poetry comes from Rupi Kaur of Canada.

Hall said her goal is to one day own her own barbershop. Hall said she also has an idea for a barbershop on wheels that she can take to different locations.

Supporters of former President Donald Trump participate in a rally on Jan. 6 in Washington preceding the breach of the Capitol.