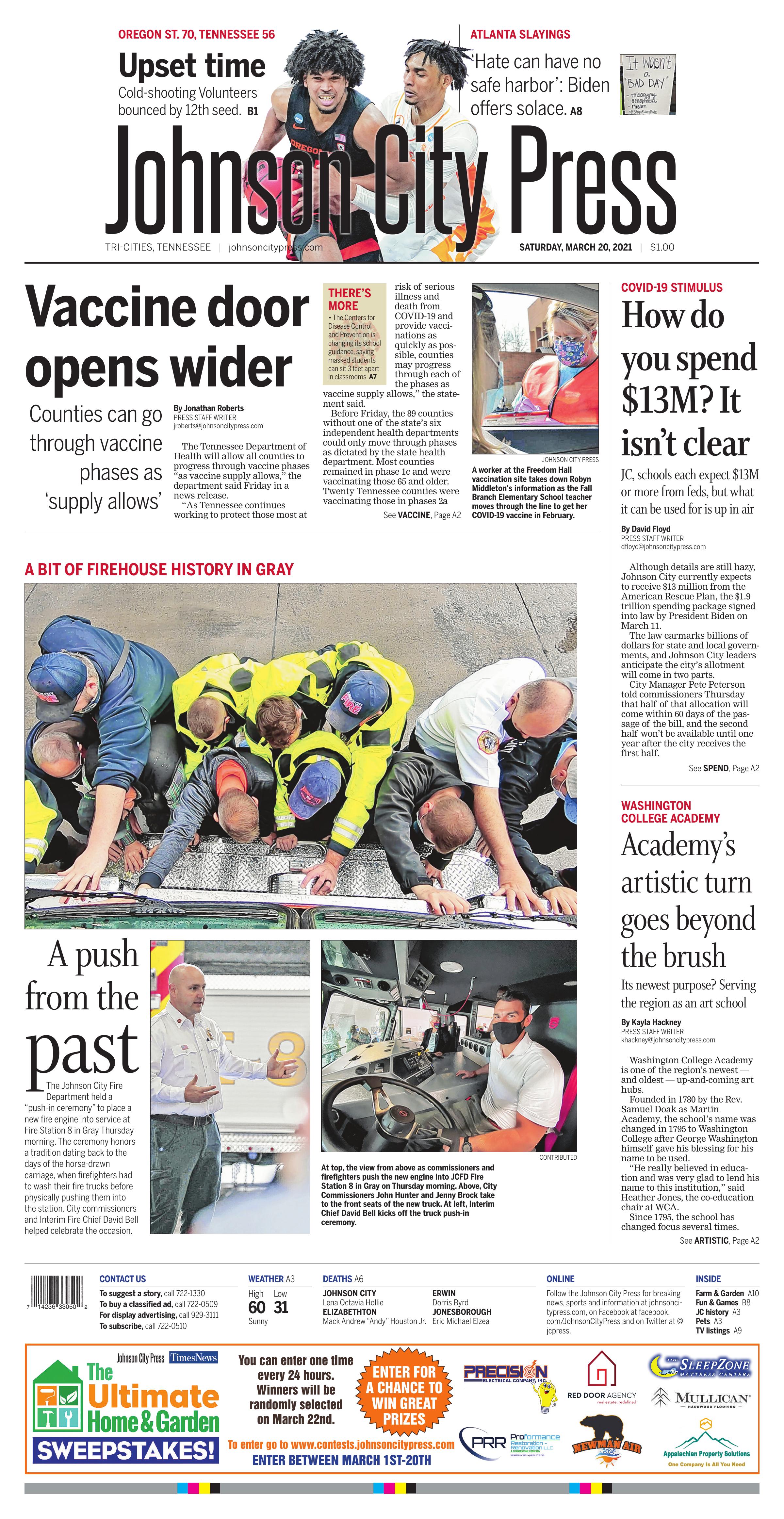 The Tennessee Department of Health will allow all counties to progress through vaccine phases “as vaccine supply allows,” the department said Friday in a news release.

“As Tennessee continues working to protect those most at risk of serious illness and death from COVID-19 and provide vaccinations as quickly as possible, counties may progress through each of the phases as vaccine supply allows,” the statement said.

In an email to the Press, a spokesperson for the Northeast Regional Health Office, which oversees seven of the region’s eight counties, said those in phases 2a and 2b can now register for a vaccine, as can those who are 55 and older. An official announcement is expected on Monday when the TDH will host a media briefing to discuss the changes.

The Sullivan County Regional Health Department also announced it would move to phases 2a and 2b and vaccinate those 55 and older earlier Friday morning.

Phase 2a and 2b includes those working in critical infrastructure jobs such as commercial agriculture, corrections staff not included in phase 1a1, public transit drivers and maintenance personnel, social services, telecommunications and public infrastructure.

How Can You Get Vaccinated?

To register for a vaccine, visit bit.ly/2ZVJS8c. Ballad Health is also offering vaccine appointments in Abingdon, Elizabethton, Kingsport and Norton, which you can register for by visiting bit.ly/3e1ru5Y. To find other vaccination sites, such as pharmacies and grocery stores, visit covidvaccinefinder.org.

Although details are still hazy, Johnson City currently expects to receive $13 million from the American Rescue Plan, the $1.9 trillion spending package signed into law by President Biden on March 11.

The law earmarks billions of dollars for state and local governments, and Johnson City leaders anticipate the city’s allotment will come in two parts.

City Manager Pete Peterson told commissioners Thursday that half of that allocation will come within 60 days of the passage of the bill, and the second half won’t be available until one year after the city receives the first half.

“There’s still not a lot of clarity as to what qualifies as an eligible expense,” Peterson said Thursday.

Peterson said he’s been having conversations about how the city can use the federal funding and added he would be sitting down for a call with regional city managers on Friday.

“As we get more clarity on how it can be utilized, we will certainly be sharing that with you and looking for some policy decisions and direction on how best to invest that in our local economy to ensure that our economy stays vital,” Peterson told commissioners.

A city representative wasn’t available Friday to discuss the funding, with a spokesperson noting it would be too early to talk about the stimulus because the details haven’t been made clear.

After preparing for a challenging end to the 2020 fiscal year because of the COVID-19 outbreak, city officials reported in October that they were pleasantly surprised by the city’s financial outlook, which was bolstered by sales tax generation from online sales and visits to big box and grocery stores.

Shutting down many of its operations also allowed the city to save money.

“The City of Johnson City has found itself in a more fortunate position than many other municipalities across the state or in the country,” spokesperson Ann Marie French told the Press. “We’ve not yet learned how the funding will be distributed or how it can be used. Once we receive that information we can better determine how the stimulus funding can benefit us.”

Peterson also addressed the question of stimulus funding during an agenda review meeting Tuesday, stressing that the city is still waiting for more concrete information.

“We’re still not sure as to exactly how much money we’re going to get nor how the money can be utilized,” he said.

The money will come directly from the U.S. Treasury, he said. Upon initial review, it appears the city can use it to cover lost revenues plus overtime and other costs associated with COVID-19. Some infrastructure expenses could also be allowed, specifically water, sewer and broadband.

“Beyond that there really isn’t a lot of direction on what that money can be used for,” he said Tuesday.

In total, the stimulus sets aside $130.2 billion for local governments. Half of that will go to counties.

School systems are also receiving a healthy dose of stimulus funding, but local officials are also waiting for additional information.

Barnett said 20% must be set aside to handle learning loss or skills gaps that have developed because of the COVID-19 pandemic. The system will begin working with school principals and supervisors to determine what those investments will look like.

The system is still determining how precisely it can spend the remaining 80%. The money could be usable for expenses like HVAC improvements, technology upgrades and mental health services.

There will be a deadline to spend the money.

“We definitely want to be good stewards of this public money,” Barnett said. He expects the system should know more in the next couple of weeks.

One popular course at Washington College Academy is the ceramics class.

Washington College Academy will host WCA Camp Creativity on select dates in June and July. Students will have the option to take a variety of arts and crafts classes during the camp.

Forges are used during the blacksmithing classes offered at Washington College Academy.

Washington College Academy offers many different classes such as blacksmithing.

The Pence Graybeal Arts building is where many of the art classes take place.

Washington College Academy is one of the region’s newest — and oldest — up-and-coming art hubs.

Founded in 1780 by the Rev. Samuel Doak as Martin Academy, the school’s name was changed in 1795 to Washington College after George Washington himself gave his blessing for his name to be used.

“He really believed in education and was very glad to lend his name to this institution,” said Heather Jones, the co-education chair at WCA.

Since 1795, the school has changed focus several times. After suffering extensive damage during the Civil War, the campus was used as a women’s college in 1866. Two years later it returned to co-educational status

After David Crockett High School was built in 1971, the academy became a private preparatory high school, and graduated its final class in 2001.

“Even after it stopped being a formal high school there were still education things happening on campus, so it has never closed,” Jones said. “It’s been continual.”

Washington College Academy’s newest purpose is to serve the region as an art school.

“We have a lot of art things that are happening, but we really don’t have an art school, and I thought ‘Why not?’” said Jones.

The academy offers a number of different art classes, including blacksmithing, painting, cosplaying and even brick-oven making.

“I don’t want people to get the idea that arts is only painting and drawing, because we have gone so far beyond that,” said Dr. George Blanks, the vice president and chairman of the WCA Education Committee.

Alongside its class schedule, WCA also hosts a variety of events. High School Art Day is a new event coming up on April 10 that WCA hopes to turn into an annual event.

“I would love to see a whole campus full of high school students on that day,” Jones said.

High School Art Day will give high school students the opportunity to take a class in one of several different artistic mediums, like drawing, stained glass or ceramics.

Tuition costs for classes and events vary, but WCA doesn’t want the expense to keep anyone from learning a new skill, which is one of the reasons they have a volunteer program.

“If a person says they want to be in the volunteer program, we might have them do all kinds of things,” said Blanks. “They might help rake leaves up on the lawn, they might help do things around that we need done, and then for every hour they put in working, that’s worth so much on their tuition for their classes. So theoretically they could do enough hours so they wouldn’t have to pay any tuition for their classes.”

The volunteer program is also how WCA does its Artist-in-Residence program.

Artists can rent studio space at the academy and pay either outright with money or through volunteer hours.

While the academy is still building its curriculum and teaching staff, Jones said she hopes the historic campus can grow and become a hub for regional artists.

“There is no reason that we can’t be another art hub,” said Jones. “You can never have too many.”

For more information on Washington College Academy, or to register for classes or events, visit wca1780.com.