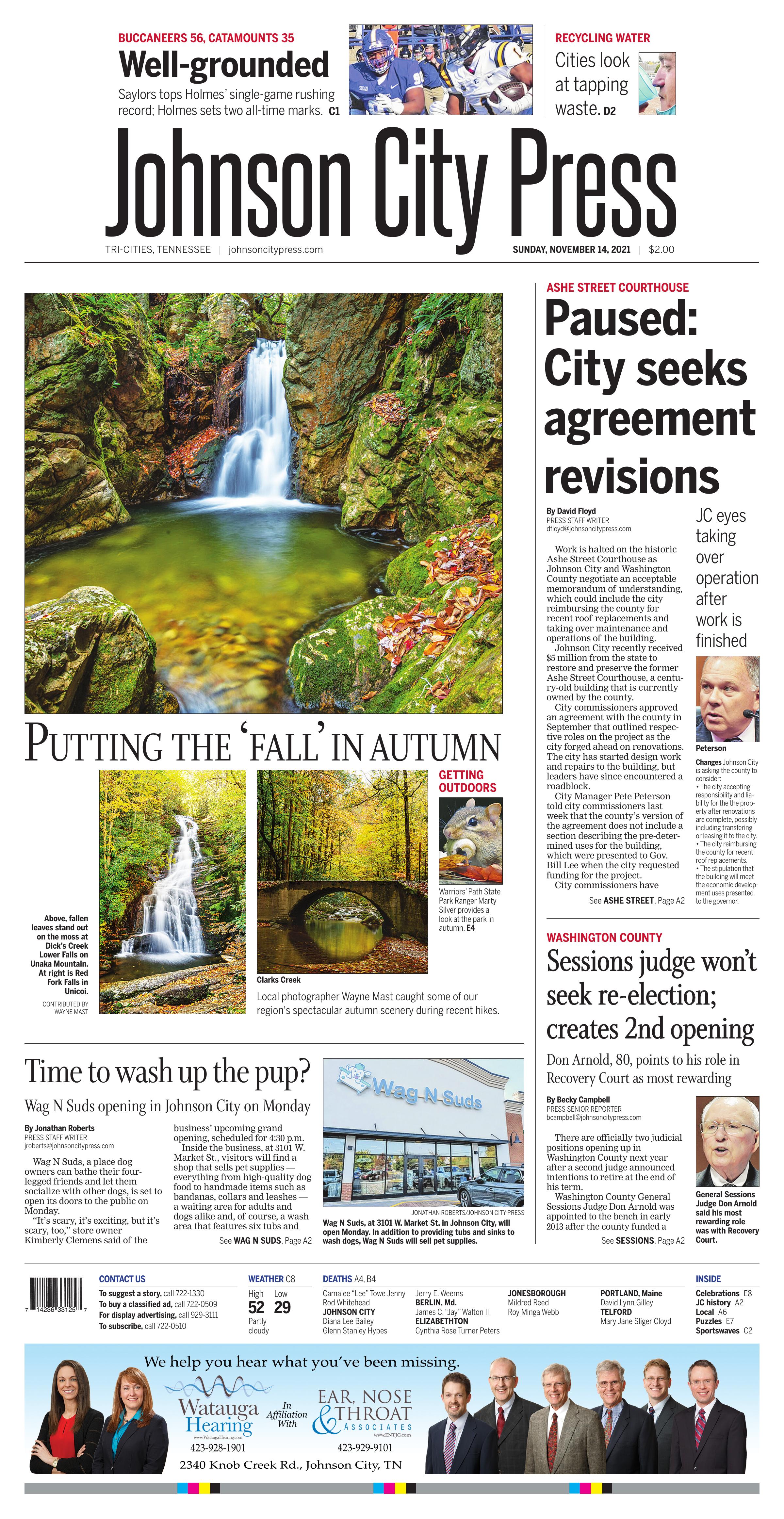 Kimberly and Mark Clemens pose for a photo inside their new business, Wag N Suds.

Hand-painted murals wrap around the inside of the store.

Wag N Suds, a place dog owners can bathe their four-legged friends and let them socialize with other dogs, is set to open its doors to the public on Monday.

Inside the business, at 3101 W. Market St., visitors will find a shop that sells pet supplies — everything from high-quality dog food to handmade items such as bandanas, collars and leashes — a waiting area for adults and dogs alike and, of course, a wash area that features six tubs and two sinks to wash big and small dogs alike, including one room reserved specifically for police K9s.

In addition, two of the tubs are wheelchair accessible, something Clemens said was important to include as she spent a year in a wheelchair and knows how difficult it can be to wash your service dog while confined to a wheelchair.

“We work with a lot of different small businesses to carry their products,” Clemens said. “It’s harder, it’s more work for us — it’s much easier if I just work with a big distributor and say ‘This is what I want’ and they supply everything I need — but I also know that working with these small businesses we get some kind of neat things that the big box stores aren’t going to have.”

The duo, who retired to the area from California almost a decade ago, said they used to take annual trips to Northeast Tennessee and fell in love with the area. Clemens said that they visited the area not long after her father died one winter, and in one weekend viewed 30 homes around East Tennessee, eventually placing an offer on a home they didn’t think would be accepted.

It was, and within three weeks they listed their home in California, arranged movers, sold the house and moved across the country.

“Everything just went without a hitch,” Clemens said. “God puts you where you’re supposed to be, and God opens doors and God obviously wanted us here and so here we are and we’ve been here almost nine years and we love it here.”

Then, the pandemic came and left the Clemens’ wanting to take on a new challenge, leading Kimberly to begin researching the idea of them opening their own business.

On a drive one day while looking for locations to open the business, they stumbled across the vacant space next to the Dollar Tree on West Market Street. From there, everything else just fell into place.

“Everything went perfect,” Clemens said. “This, obviously, is where we’re supposed to be.”

Johnson City commissioners have authorized City Manager Pete Peterson to send a letter to the county offering to take possession of the Ashe Street Courthouse, 401 Ashe St., either through an outright transfer or a long-term lease.

Work is halted on the historic Ashe Street Courthouse as Johnson City and Washington County negotiate an acceptable memorandum of understanding, which could include the city reimbursing the county for recent roof replacements and taking over maintenance and operations of the building.

Johnson City recently received $5 million from the state to restore and preserve the former Ashe Street Courthouse, a century-old building that is currently owned by the county.

City commissioners approved an agreement with the county in September that outlined respective roles on the project as the city forged ahead on renovations. The city has started design work and repairs to the building, but leaders have since encountered a roadblock.

City Manager Pete Peterson told city commissioners last week that the county’s version of the agreement does not include a section describing the pre-determined uses for the building, which were presented to Gov. Bill Lee when the city requested funding for the project.

City commissioners have authorized Peterson to negotiate an altered agreement with the county. He sent a letter to Washington County Commission Chair Greg Matherly on Monday outlining the city’s requests.

“As we all know, the state funding was for repurposing the building to serve primarily as an entrepreneurship center,” Peterson wrote. “Meeting that requirement may still leave some room for other public purposes.”

The building must maintain some form of public use. Otherwise, ownership will revert to the federal government.

The city is required to spend the $5 million it received from the state by June 30, 2022, which puts the city on an “extremely tight timeline,” Peterson said. Without an agreement that meets the conditions of the proposal presented to the governor, he notes, the city has paused all work on the project.

In order to allay several questions and concerns by county commissioners, Peterson said, the city is asking the county to consider a revised agreement with three changes:

• The city will accept responsibility and liability for the operation and maintenance of the property after renovations are complete.

That could include the county transferring or leasing the property to the city.

• The city will reimburse the county for the cost of recent roof replacements.

• The agreement will stipulate that the building will meet the economic development uses presented to the governor. That includes acting as a center for small business development and entrepreneurship and a site for East Tennessee State University’s rural health and research foundation.

“In order to get this project moving forward, both the city and county commissions must approve a revised (memorandum of understanding) at their upcoming November meetings to ensure preservation of this historic structure and better Washington County for all of its citizens,” Peterson wrote.

Washington County Court General Sessions Judge Don Arnold will retire at the end of his term in 2022.

There are officially two judicial positions opening up in Washington County next year after a second judge announced intentions to retire at the end of his term.

Washington County General Sessions Judge Don Arnold was appointed to the bench in early 2013 after the county funded a third judgeship to ease the overburdened dockets of Sessions Judge Robert Lincoln and then-Sessions Judge James Nidiffer.

The following year, he ran against three attorneys seeking the seat but sailed to an easy win for a full eight-year term.

In October, Circuit Court Judge Jean A. Stanley announced she would not seek a fourth term.

Her term as a First Judicial District Circuit Court judge ends on Aug. 31.

At 80, Arnold said his days as a judge are winding down and it’s time for a younger generation to take the lead.

“If I would run again and be successful I’d be 88 when that term was up, and that’s too far along,” Arnold said on Friday. “It’s time to pass it on to the younger generation and let someone else take on the challenge.”

During his nine years on the bench, Arnold said his most rewarding accomplishment was helping to establish and running Recovery Court, often referred to as “drug court” as the defendants selected are working toward a drug-free life to become productive citizens.

Arnold began his law career in 1967 elsewhere in the state, but moved back to East Tennessee to start a firm, Hicks, Arnold, Haynes and Sanders, in 1968. Today that firm is simply the Haynes law firm.

He retired from full-time practice, but was still working part-time when the county approved funding for a third sessions judge.

“I’ve been very lucky with the background I’ve had,” he said. “I’ve always enjoyed public service. I wasn’t ready in 2013 to hang it up and when that opening came about I decided to take a shot at it.”

“Drug court … that’s what I’m most proud of,” he said. “We started the first one after the state started funding them. I decided I’d be willing to serve as judge of that court,” he said.

The misdemeanor drug court comes with extra duties but no extra pay.

“It’s been very successful … not everybody graduates. We probably have 15 to 25% complete the program. To me that’s a phenomenal number considering what those folks are facing and what they’ve been through.”

Arnold said his desire to help people led him to become involved in Recovery Court.

“It’s just an interest I had,” he said. “I like to try to help people when I can. That’s a way to help (and) lend some guidance and work as a mentor in some instances … try to put them in a program to get them working to get their families and kids back.

“I tried to show them tough love; I’m going to love them and try to help them but at the same time if they need sanctions I won’t hesitate to do that because that’s part of the treatment process.”

Another area Arnold worked on, which is why that position was created, was to move cases through Sessions Court more quickly so justice for defendants was not delayed.

“Some progress has been made but the downside is the caseload has increased tremendously since then,” he said. “It keeps the three of us busy to keep caught up.”

Arnold said the county also needs more public defenders in court because of the high caseloads.

“I have children in North Carolina, Iowa and Maryland and I have six grandchildren. I look forward to spending more time with my family and my wife, Linda, and I have some traveling to do,” he said.

Arnold said he’s also hanging up his hat as a beef cattle farmer and has already sold off his herd and three of four farms he owned.

As for who might fill the position Arnold will retire from next year, there are rumors circulating in the legal community of at least three attorneys who intend to seek the spot. No one has made an official announcement.