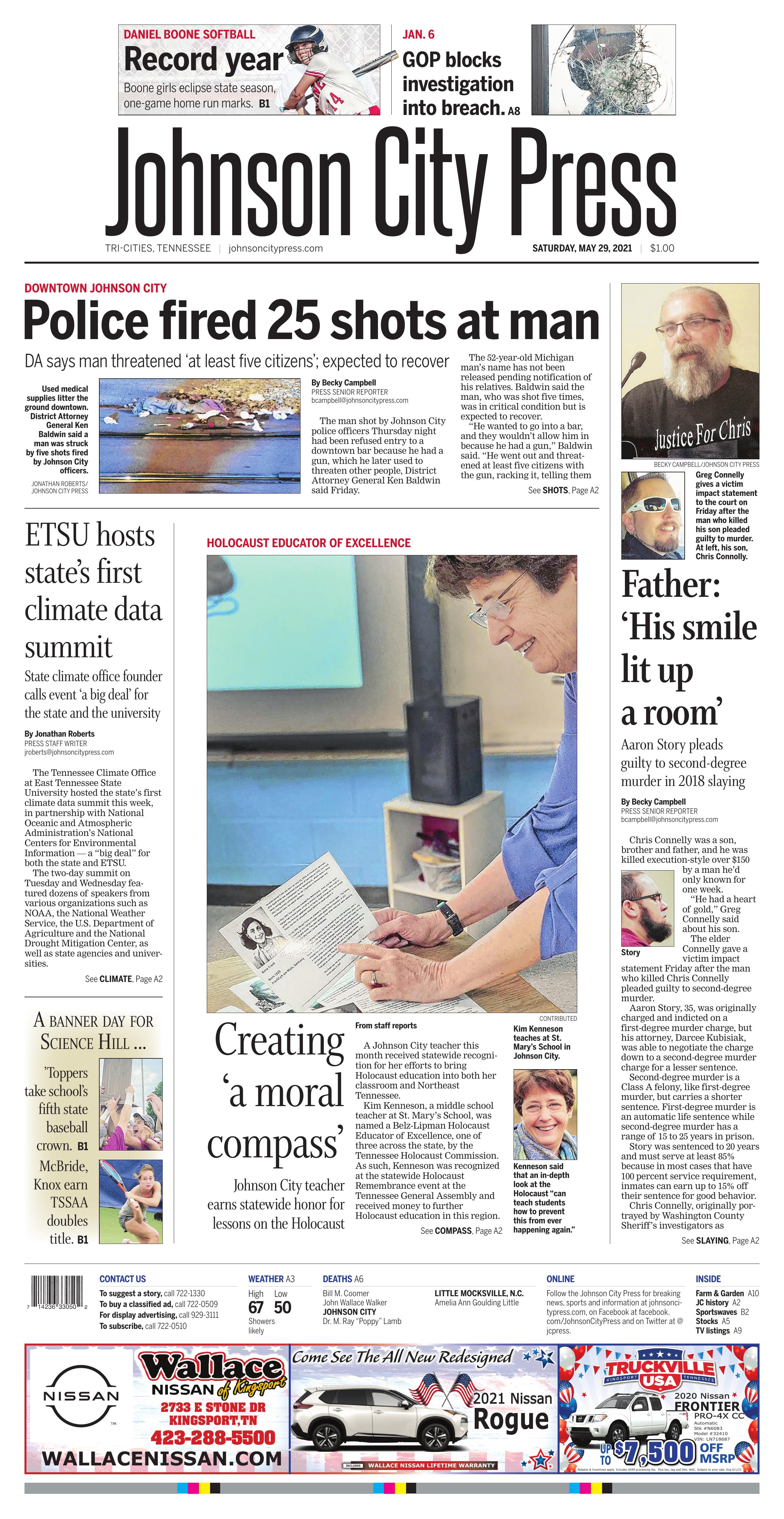 Used medical supplies littered the ground near the train tracks on May 27, 2021.

The man shot by Johnson City police officers Thursday night had been refused entry to a downtown bar because he had a gun, which he later used to threaten other people, District Attorney General Ken Baldwin said Friday.

The 52-year-old Michigan man’s name has not been released pending notification of his relatives. Baldwin said the man, who was shot five times, was in critical condition but is expected to recover.

“He wanted to go into a bar, and they wouldn’t allow him in because he had a gun,” Baldwin said. “He went out and threatened at least five citizens with the gun, racking it, telling them he was going to shoot them.”

Five calls were made to 911 to report the incident, and when police arrived near the railroad tracks behind White Duck Taco, they encountered the man, Baldwin said.

“He pointed the gun at them … they shot him,” after being threatened, Baldwin said. Three officers fired their weapons a total of 25 times from 125 feet away.

Baldwin said he believes at this time that the officers did the right thing because the man was threatening them and others. He also said the distance from which the officers shot was much farther than what they are qualified for in police training.

Baldwin said the man is former military and had items on him saying as much. He also believed the man was being treated for some type of military-related issues.

“I think the police responded appropriately,” Baldwin said. “If a guy is walking downtown with a gun and threatening people, something needed to be done.”

According to the TBI, which always investigates police-involved shootings, police responded to a report of an armed man causing a disturbance in the 100 block of Buffalo Street around 8 p.m. And, “as officers interacted with the man, he displayed the gun, resulting in officers firing their weapons,” a TBI statement reads.

No officers were injured in the shooting.

A nearby witness reported hearing numerous gunshots in the area near White Duck Taco Shop and Founders Park, which was taped off for much of Thursday night. Used medical supplies littered the ground near the train tracks.

Baldwin said he could release no other details at this time.

The officers involved in the shooting were placed on paid administrative leave per department policy.

A Johnson City teacher this month received statewide recognition for her efforts to bring Holocaust education into both her classroom and Northeast Tennessee.

Kim Kenneson, a middle school teacher at St. Mary’s School, was named a Belz-Lipman Holocaust Educator of Excellence, one of three across the state, by the Tennessee Holocaust Commission. As such, Kenneson was recognized at the statewide Holocaust Remembrance event at the Tennessee General Assembly and received money to further Holocaust education in this region.

She and other Holocaust educators organized a regionwide virtual event in April in which area high school students joined with the Milligan University choir and orchestra to remember the Holocaust. The event was shown at high schools across Northeast Tennessee.

“Lessons from the Holocaust create a moral compass for our students,” said Kenneson. “By providing an in-depth look at the forces that created this atrocity, we can teach students how to prevent this from ever happening again.”

At St. Mary’s School, Kenneson teaches a unit on the Holocaust that embeds both the historical context and literature from Holocaust victims.

She has traveled to such Holocaust sites as Auschwitz and the Jewish quarters of Krakow, Poland, to further her education. Over the past several years, she has attended several conferences nationwide on the Holocaust and was named as part of a cohort of teachers for the Museum Teacher Fellow program at the United States Holocaust Memorial Museum.

In 2019, she organized the Northeast Tennessee Holocaust Education Council along with other area teachers, professors, and members of the B’nai Sholom congregation. They have assembled teaching materials for area schools that will be augmented with the proceeds from the award and distributed upon request by schools.

The Belz-Lipman Holocaust Educator of Excellence award is given annually by the Tennessee Holocaust Commission after a statewide competition in which teachers apply or are recommended by their students and others. The educators are recognized by the Tennessee General Assembly at its annual Holocaust Remembrance Event.

A former student of Kenneson’s wrote her recommendation.

Dr. Andrew Joyner, left, and Wil Tollefson, are the founders of the Tennessee Climate Office at ETSU.

The Tennessee Climate Office at East Tennessee State University hosted the state’s first climate data summit this week, in partnership with National Oceanic and Atmospheric Administration’s National Centers for Environmental Information — a “big deal” for both the state and ETSU.

The two-day summit on Tuesday and Wednesday featured dozens of speakers from various organizations such as NOAA, the National Weather Service, the U.S. Department of Agriculture and the National Drought Mitigation Center, as well as state agencies and universities.

The state climate office was established in 2016, and was officially recognized by the American Association of State Climatologists earlier this year.

It provides climate data services to state agencies, researchers and citizens while studying the impact of drought, extreme rainfall, severe storms and other hazards. Before the TCO was founded in 2016, Tennessee was one of only two states in the nation without a state climate office after one operated by the Tennessee Valley Authority shuttered in 2006.

“I think it’s pretty critical,” Joyner said of having a state climate office. “There’s all sorts of decisions that are being made — I think a lot of that was pretty clear in the conference — there’s a lot of state agencies, local government, emergency managers, people in transportation, with metro planning, and (Tennessee Department of Transportation) and (Tennessee Department of Environment and Conservation) ... all these people need good, reliable climate data and I think up until now they’ve only been getting the Wikipedia version of what they can get relevant to Tennessee.

“I think this is huge,” Joyner continued.

Joyner said they heard from many people who said they need reliable climate data on a local and county level, something Joyner said is “the type of service we could create and that the state would benefit a lot from.”

“That’s kind of one of our big goals, is to parse these larger datasets down into something that’s more digestible and local and also something that’s not, ‘Here’s a bunch of random datasets that you don’t know how to use’ but ‘Here’s the information from the data, and here’s a tool that’s easy, or an infographic’,” Joyner said, noting the information could benefit regular people, as well as those working in the, say, farming or transportation industry.

“All those kind of minute, nuanced things could be really important,” Joyner added later.

TCO co-founder Wil Tollefson said hearing from potential stakeholders was a key part of the summit.

“A part of the goal there too was for us to get information from potential stakeholders, so people that would want climate data or that could use data that we, as a climate office, could then curate for them,” Tollefson said. “We know what’s out there, we know what could be possible, but to be an effective climate office we need to know what people need or want so that we can either help connect them to an existing service or build one.”

Relatives of Chris Connelly remained quiet, but couldn't contain tears during a plea hearing for man who killed their brother, Aaron Story.

The pain was obvious on the face of murder victim Chris Connelly's sister, Krystle Connelly, during a hearing Friday, May 28, 2021 when her brother's killer pleaded guilty.

The pain was obvious on the face of murder victim Chris Connelly's mother, Heidi Connelly, during a hearing Friday, May 28, 2021 when her son's killer pleaded guilty.

Greg Connelly gave a victim impact statement to the court on Friday, May 28, 2021 after the man who killed his son, Chris Connelly, pleaded guilty to murder.

Chris Connelly was a son, brother and father, and he was killed execution-style over $150 by a man he’d only known for one week.

“He had a heart of gold,” Greg Connelly said about his son.

Story was sentenced to 20 years and must serve at least 85% because in most cases that have 100 percent service requirement, inmates can earn up to 15% off their sentence for good behavior.

Chris Connelly, originally portrayed by Washington County Sheriff’s investigators as homeless and estranged from his family, was nothing like that description, his father said.

“He didn’t have his own home, but he wasn’t homeless,” Greg Connelly said. He said his son was just trying to help Story out by finding a source for drugs.

“This was a senseless act ... over what a family of four would pay for dinner at Red Lobster,” Greg Connelly said.

In his statement in open court, the elder Connelly said his son’s daughter just graduated from high school.

“It’s been three years coming … we are Chris’ voice that you have silenced,” he said. “You only knew Chris for a week … his smile lit up a room when he walked in.”

During the time Criminal Court Judge Stacy Street was taking the guilty plea, Connelly’s father, mother, brother, sister, oldest daughter and another relative kept themselves in check, but the pain on their faces was obvious, and some couldn’t stop the tears.

They all wore black t-shirts that said “Justice For Chris” and had his photo on them.

Connelly’s body was found dumped at a Buffalo Mountain hiking trail head June 2, 2018, by a woman walking her dog at the Lone Oak trail. Court documents said he was found shot in the back of the head and partially clothed in the wooded area near the trail.

Attempting to trace the hours preceding his death, investigators said they discovered he had been seen with Story and another man. An affidavit said Story told police Connelly was shot while the two men fought after attempting to track down a third man to whom Story gave $150 in exchange for cocaine, but never received the drugs.

Story said Connelly was one of the brokers of the bad deal, and it was he who initiated the altercation in the woods that ended in his death.

Greg Connelly said his son’s murder had caused a tremendous strain on his 43-year marriage to his wife, but he wasn’t willing to allow Story’s action to break that up.

“I’m not giving up 43 years for you,” he said. “You have condemned us to hell as we can never forgive you. This was an evil, senseless act.”