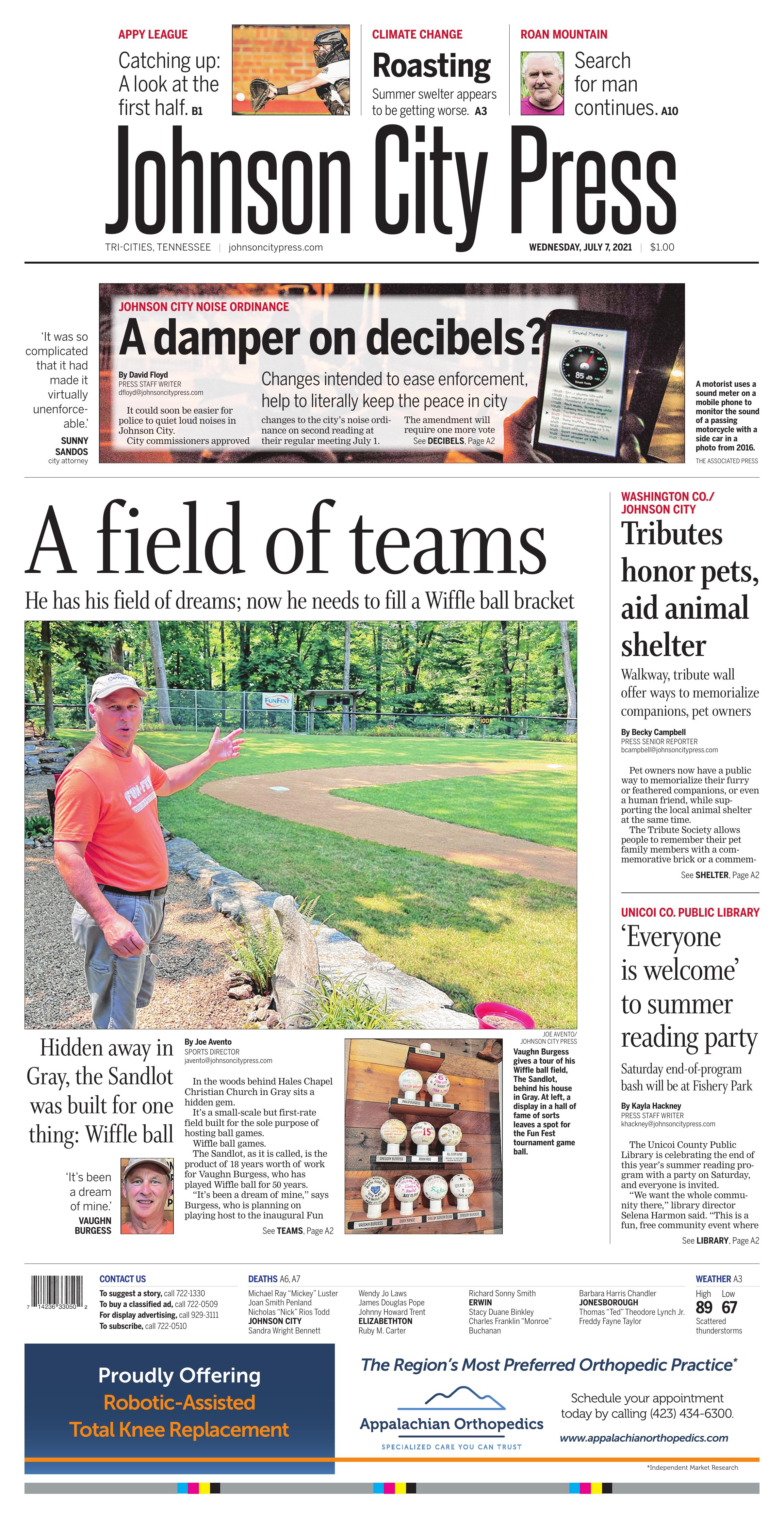 It could soon be easier for police to quiet loud noises in Johnson City.

City commissioners approved changes to the city’s noise ordinance on second reading at their regular meeting July 1. The amendment will require one more vote of approval before it goes into effect.

Under current rules, it can be an onerous process for officers to measure noise coming from an offending property, said City Attorney Sunny Sandos.

“It was very complicated, and it was so complicated that it had made it virtually unenforceable because our officers just were not able to complete all the steps that were necessary in measuring the noises,” Sandos said.

Sandos said the city will use the same devices, measure sounds at pretty much the same levels and will take into account any interfering noises, but the changes cut out some of the complications. According to a draft placed on the commission’s June 17 agenda, violations would continue to be an up-to $50 fine under the revised ordinance.

Maj. Matt Howell told commissioners in June that officers currently have to take a measurement of the sound with a meter and then come back the following night to take an ambient reading.

“When someone complains about the noise you’re not getting immediate remedy to that problem because of the way the ordinance was written,” Howell said. “With this officers can take immediate action based on the reading that they’re seeing.”

Sandos said the city examined its policy at the request of the police department.

“There would be calls that would come in from citizens regarding potential noise violations and the police weren’t able to effectively investigate them,” Sandos said.

Changes also allow codes enforcement staff to enforce the noise ordinance. Current rules only enable police officers to do so.

Additionally, the amendment adds a ban on sound amplification devices on public property. Sandos said the prohibition does not affect private businesses or private property.

Because there are a lot of events that use sound amplification devices on public property, Sandos added, the amended ordinance does include a series of exceptions to this rule. That includes allowing amplification during routine assemblies, special events, sporting events or activities approved by a representative of that location.

Sandos said many other cities have placed a ban on sound amplification devices on public property. City officials examined rules in Franklin, Murfreesboro and Knoxville.

“There are instances where there are offending sounds and nuisance sounds when there’s not events going on, and this allows the city the ability to address those offending noises,” she said.

Overall, Sandos noted, the current noise ordinance is very complicated, but the changes make it more practical. The ultimate goal, she said, is for the police to be able to help when they receive a call about loud noises.

Vaughn Burgess gives a tour of his Wiffle ball field behind his house in Gray.

A view of the Sandlot from the outfield.

Some game balls from key moments in the 18-year history of the Sandlot are on display in a building near the field.

The spot for a game ball from the Fun Fest tournament is being reserved at the top.

One of the balls on display is from when Vaughn Burgess hit a home run from each side of the plate in the same game.

Vaughn Burgess with some game balls from key moments in the 18-year history of his Wiffle ball field.

The brackets are ready to be filled.

Meticulous stats are kept from the adult league that plays each Sunday afternoon.

In the woods behind Hales Chapel Christian Church in Gray sits a hidden gem.

It’s a small-scale but first-rate field built for the sole purpose of hosting ball games.

The Sandlot, as it is called, is the product of 18 years worth of work for Vaughn Burgess, who has played Wiffle ball for 50 years.

“It’s been a dream of mine,” says Burgess, who is planning on playing host to the inaugural Fun Fest Wiffle ball tournament this month — if he can get enough teams to register. “I played it and I thought if I built the right facility, I could get people to come and enjoy the game. They do when they get here.”

Burgess’ field of dreams sits in a peaceful setting, surrounded by perfectly manicured landscaping. The outfield fences are anywhere from 95 to 100 feet from home plate. The smooth infield grass is surrounded by sandy base paths. 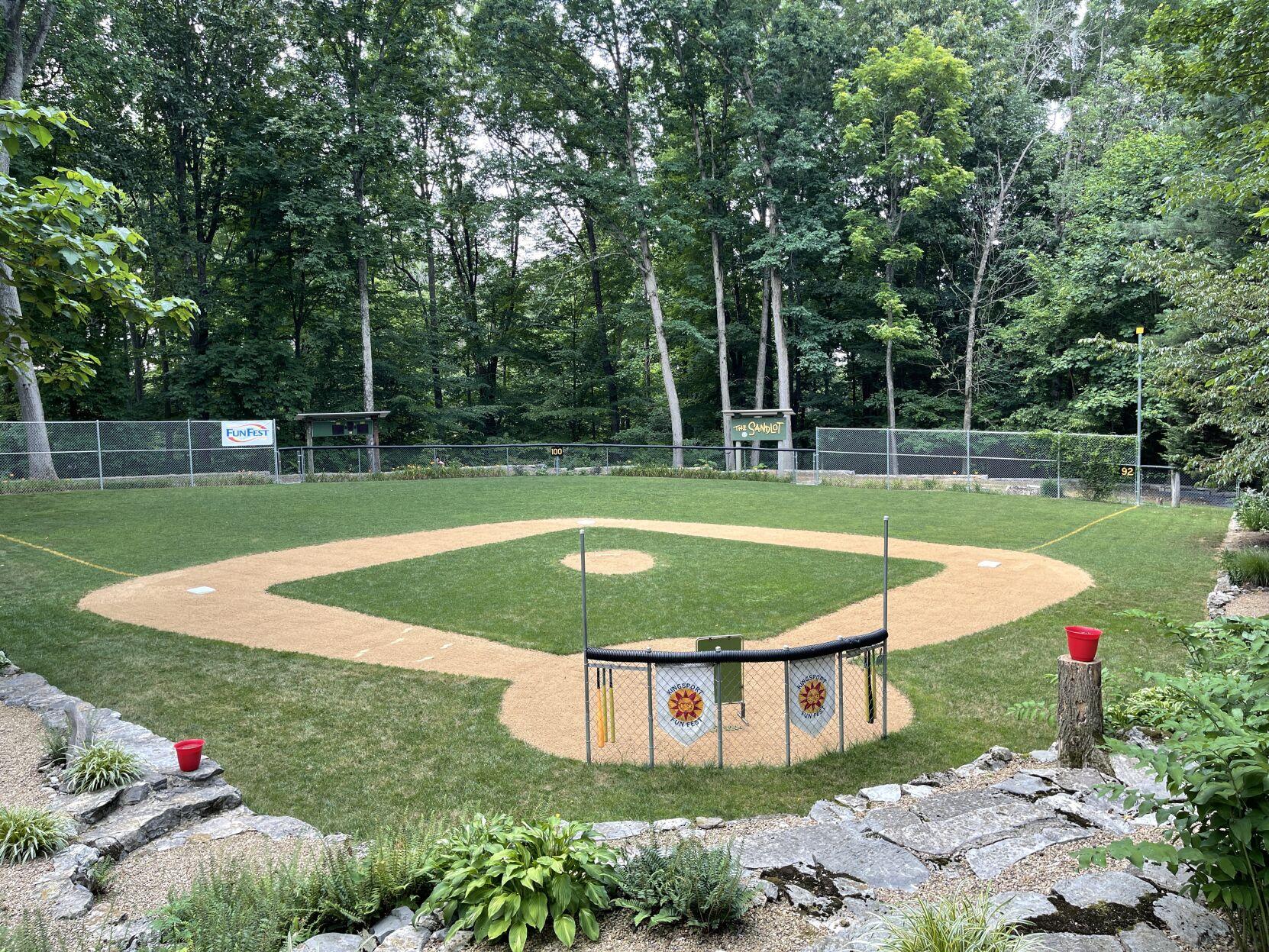 The Sandlot will be the site of the preliminary games for the Fun Fest Wiffle ball tournament.

The question that comes to mind during a brief tour of the Sandlot is “Who wouldn’t want to play here?”

That’s what Burgess hears most often by those seeing the facility for the first time. Everything is top notch and it seems as if no detail has been left to chance.

Just getting the people here is the trick, especially for the Fun Fest tournament.

“Most people don’t know anything about this,” he said. “We’ve never marketed this place, ever. For Fun Fest I need to get the word out to the kids that we’re here. If you ever wanted to play Wiffle ball, here’s your chance. Here’s a field to play on.”

The Fun Fest tournament is for teams of six players, all of whom have to be 17 years old or younger.

The hoped-for field of 12 teams in the double-elimination tournament will begin on Friday, July 16. All the games will be played at the Sandlot, with the championship game being held at the Miracle Field in Kingsport.

“We need to get some teams in here,” Burgess said, pointing to the bracket. “There’s a few signed up, but we need to get 12 and they’ve got less than two weeks.”

PASSION FOR THE GAME

Burgess’ love affair with Wiffle ball began years ago and his passion hasn’t waned. There’s pure excitement in his voice as he talks about his favorite game.

The field is the site of numerous events, from a Sunday league for all comers to hosting youth groups.

“Everybody who plays Wiffle ball has their own rules,” Burgess said. “We have our own rules too. Those have been developed over 50 years. We’ve developed rules that let girls play, children under 10 play, men and women over 65, and it’s fair for everybody. It’s really nice. You can come out here at any age and play Wiffle ball with us.”

One of the little known rules is that you can throw the ball at a base runner to get them out.

Pitching is a different matter. There are no fastballs at this field. “Half speed” is how the style of pitching is described under the local rules and every pitch has to have some arc on it. The games are self-umpired by the players.

“We’ve never had a fight here in 18 years,” Burgess said. “We’ve had some bumped heads, but never a fight.”

A Hall of Fame of sorts is housed in the building next to the field. It displays game balls from special moments, like the time a player hit his 73rd home run in a season to set the Sandlot record, or when Burgess became the first player to hit home runs from both sides of the plate in the same game.

There’s also a pyramid of special balls, with the top spot being saved for the game ball from the first Fun Fest game.

“Fun Fest has been my goal for a long time,” Burgess said. “I’ve wanted to try to get an organized event going. It’s really a fun game. I know the players are out there. I just have to find them.”

Registration for teams in the Wiffle ball tournament — and all Fun Fest events — can be done on the website, www.funfest.net.

Pet owners now have a public way to memorialize their furry or feathered companions, or even a human friend, while supporting the local animal shelter at the same time.

The bricks, which can be inscribed to honor or memorialize a loved one — pet or person — will be engraved with laser technology that’s durable and weather-resistant.

The bricks will pave a memorial garden walkway to be built at the Washington County/Johnson City Animal Shelter later this summer.

“We have about 15 or 20 bricks that have been purchased, and we hope to have them engraved within a couple of weeks,” Tammy Davis, the shelter’s director, said.

The commemorative tiles are imprinted with a pet’s color photograph and name and are permanently installed inside the shelter on a tribute wall.

“It’s a way to raise money for the shelter and will serve as a lasting tribute to the love and bond between animals and their families,” Davis said.

The tiles are placed in a front hallway where visitors can see them.

“We had been to other shelters that had memorial gardens with the engraved brick. We felt that was a great way to remember a pet or even a person who loved pets. We want to create a nice feature of a garden and walk for people to remember their pets,” Davis said.

There is a walkway grid so people who purchase one can choose where it’s located. The brick pathway is already installed and the engraver will not have to take them up to do his work.

“We want it to be a nice serene area,” Davis said.

The Unicoi County Public Library is hosting an end of summer reading party at Fishery Park on Saturday, July 10 from 1-4 p.m. There will be games, exhibits and prizes, and everyone is welcome to attend.

The Unicoi County Public Library is celebrating the end of this year’s summer reading program with a party on Saturday, and everyone is invited.

“We want the whole community there,” library director Selena Harmon said. “This is a fun, free community event where everyone is welcome.”

The end-of-summer reading party will feature a variety of family-friendly activities, including a water war zone with water balloons and water guns, games like tug-of-war and three-legged races, a wildlife exhibit and a geology exhibit.

“There’s gonna be an array of different rocks and minerals and things like that they can touch, learn about, see,” Harmon said.

The Unicoi County Animal Shelter will also be there with several adoptable animals for attendees to interact with.

There will also be a dunk tank, and party attendees will have the opportunity to buy chances to dunk Erwin Mayor Glenn White, as well as some other surprise guests.

“There are also some other people who are going to participate, but we’re not going to reveal all of the surprises,” said Harmon.

The summer reading grand prize winners in each age group will also be announced at the party, though participation in summer reading is not required to attend the party.

“I’m very excited about the atmosphere that we are working so hard to create,” Harmon said. “People in the public are really responding to this throwback feel, where it’s a wholesome atmosphere where it’s just good, clean fun that appeals to all ages.”

The end-of-summer reading party will take place in Fishery Park on Saturday, July 10, from 1 p.m. until 4 p.m., and grand prize winners will be announced at 2 p.m. For more information, contact the Unicoi County Public Library at (423) 743-6533.