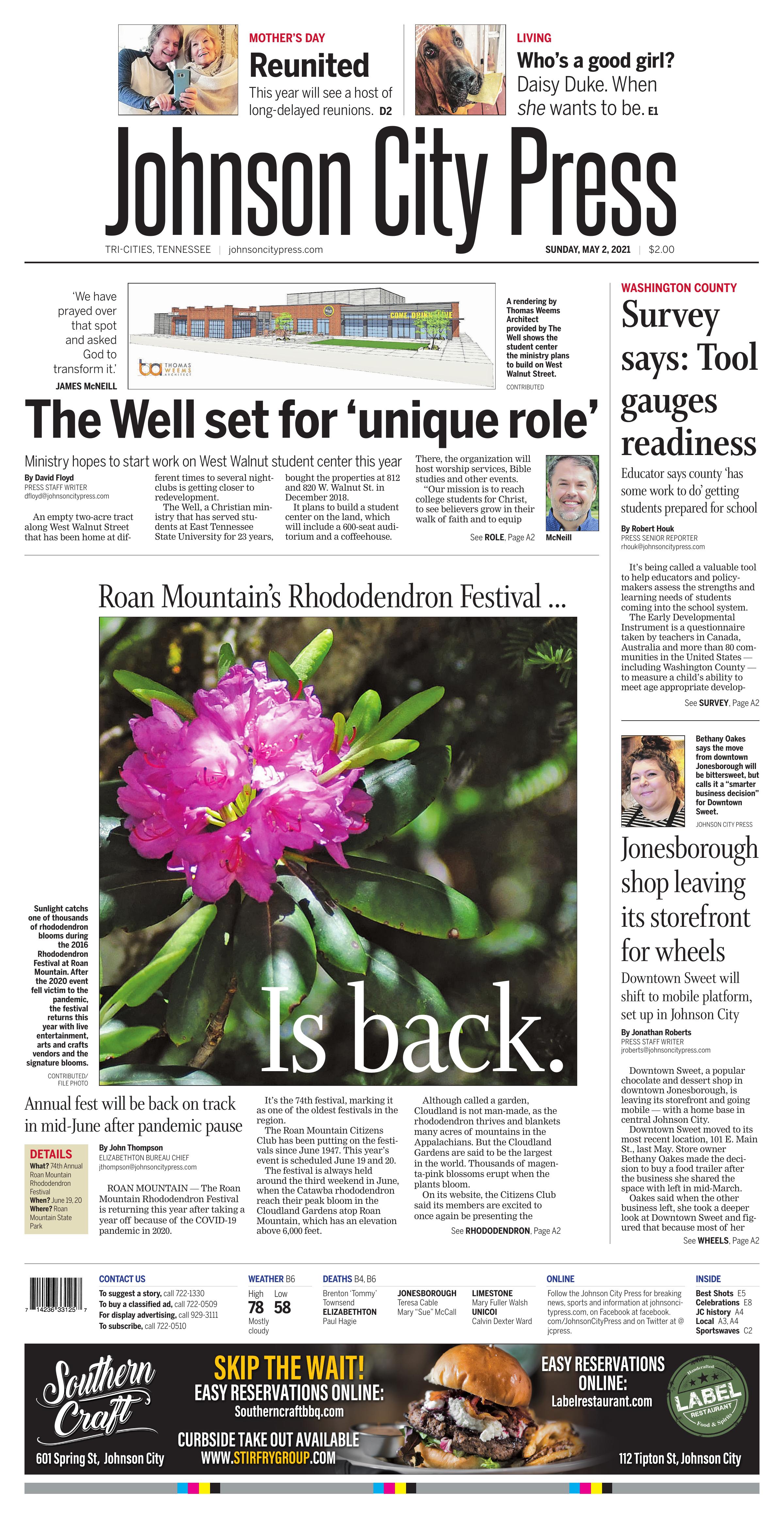 An empty two-acre tract along West Walnut Street that has been home at different times to several nightclubs is getting closer to redevelopment.

The Well, a Christian ministry that has served students at East Tennessee State University for 23 years, bought the properties at 812 and 820 W. Walnut St. in December 2018.

It plans to build a student center on the land, which will include a 600-seat auditorium and a coffeehouse. There, the organization will host worship services, Bible studies and other events.

“Our mission is to reach college students for Christ, to see believers grow in their walk of faith and to equip students to reach their campus and community and world with the message of Jesus Christ,” said James McNeill, director of ministry at The Well.

McNeill said the organization has about $2.75 million either pledged or in-hand toward its $5.5 million goal for the project, which includes the cost of the land.

“We’re still in the middle of this campaign to raise funds to get there,” McNeill said.

The ministry had originally hoped to start construction on the project in fall 2020, but the pandemic complicated things.

“We’re making great progress, but just like anyone COVID has thrown its unique challenges into that process,” he said.

The organization now hopes to begin construction by the end of 2021.

The property was previously home to The Library, a nightclub that suffered severe damage and ultimately closed after a fire in 2016. The building was demolished in 2019. According to previous Press reporting, the property also used to be occupied by the Tu-La-Fe and Seahorse nightclubs in the 1970s and 1980s as well as The Planet and Chrome.

As the city gets ready to start work on rehabilitating West Walnut Street, McNeill said it will be exciting to see the corridor become a stronger connector between ETSU and the downtown area.

“We feel like we play a unique role on Walnut Street,” McNeill said. “We’re attracted to Walnut Street because it’s within walking distance of the university, and so our ministry will be positioned in a strategic place where students will be able to walk to us. We feel like our role is to connect students to the West Walnut Street corridor.”

Currently, the organization is meeting for its services at the King’s Centre in downtown Johnson City.

“We want to be as close to the university as possible,” McNeill said. “University facilities tend to be limited and we need a permanent place where we can meet and minister to students in an ongoing way.”

McNeill said the center provides The Well with an opportunity to grow its ministry and also provide a permanent space to “reach students for the cause of Christ.” It also places the organization on a well-trafficked street.

People interested in donating can reach out to the organization through its website, thewell2020.com, or they can call the office at 232-9355.

McNeill said the proximity to campus was the main reason the ministry was attracted to the land on West Walnut Street.

“But for 20 years we have prayed over that spot and asked God to transform it,” McNeill said of the land, “and it’s amazing that we have an opportunity to transform it into a place where the name of Jesus will be celebrated and the lives of college students will be transformed for His glory.”

ROAN MOUNTAIN — The Roan Mountain Rhododendron Festival is returning this year after taking a year off because of the COVID-19 pandemic in 2020.

It’s the 74th festival, marking it as one of the oldest festivals in the region.

The Roan Mountain Citizens Club has been putting on the festivals since June 1947. This year’s event is scheduled June 19 and 20.

The festival is always held around the third weekend in June, when the Catawba rhododendron reach their peak bloom in the Cloudland Gardens atop Roan Mountain, which has an elevation above 6,000 feet.

Although called a garden, Cloudland is not man-made, as the rhododendron thrives and blankets many acres of mountains in the Appalachians. But the Cloudland Gardens are said to be the largest in the world. Thousands of magenta-pink blossoms erupt when the plants bloom.

On its website, the Citizens Club said its members are excited to once again be presenting the festival. The festival will again be located at Roan Mountain State Park, on Tenn. Highway 143 at the foot of Roan Mountain. “We look forward seeing everyone and encouraging social distancing measures,” the club wrote on its webpage.

In addition to the natural beauty of the area, the festival provides two days of live entertainment and about a hundred arts and craft vendors and purveyors of festival food. The festival is also a chance for the Citizens Club to raise money for its favorite charity, providing scholarships to outstanding graduates of Cloudland High School.

Kimberly Hale is an associate professor in educational foundations and special education at ETSU and serves as the director of the Center of Excellence in Early Childhood Learning and Development.

It’s being called a valuable tool to help educators and policymakers assess the strengths and learning needs of students coming into the school system.

The Early Developmental Instrument is a questionnaire taken by teachers in Canada, Australia and more than 80 communities in the United States — including Washington County — to measure a child’s ability to meet age appropriate developmental expectations.

Last month, members of the Washington County Board of Education heard a report on EDI data collected in a survey taken in the fall of 2019.

That survey included 1,207 children from 18 schools in both the Johnson City and Washington County school systems.

Lottie Ryans, the director of workforce and literacy initiatives at First Tennessee Development District, said the survey took teachers about 15 minutes per child to complete and represents students from 68 classrooms in city and county schools.

Ryans said the data can be used by school officials and county leaders when it comes to establishing policies and setting budgets to “help prepare kindergarteners and their families” for the start of school.

The information can help school board members and county commissioners decide where money should be spent on education.

She said the EDI data was “very essential” in making applications for state and federal grants. Ryans said BrightRidge used the information in deciding to expand broadband to schools and rural areas last year, and Johnson City has based recent infrastructure improvements on the data.

Kimberly Hale, an associate professor in educational foundations and special education at East Tennessee state University, said the EDI project will allow educators to meet the needs of a child beyond just those in the classrooms.

Hale, who serves as the director of the Center of Excellence in Early Childhood Learning and Development at ETSU, said the data can be used to help parents and custodial grandparents to address developmental issues.

“I’d like for us to use the EDI every three years to see if we are moving the needle,” Hale told school board members. “It’s important to see what assets are working on a policy level.”

Hale said the findings of the EDI show Washington County “has some work to do” in seeing that children are prepared to begin school.

The EDI shows that 74% of the kindergarteners are on track when it comes to their physical health and well being, and found 13% are at risk and another 13% are vulnerable.

By comparison, 78% of kindergarteners nationally are on track to begin school.

In terms of social competence, 72% of Washington County kindergartners were rated as being on track. The EDI found 14% at risk and 15% vulnerable.

The national data found 76% of students on track, with 14% rated at risk and 10% vulnerable.

The EDI reported 74% of county kindergartners were on track in terms of emotional maturity. Another 13% are at risk and 12% are vulnerable.

Nationally, 79% of kindergartners were found to be on track.

When it comes to communication and general knowledge, 71% of Washington County kindergartners were on track, 18% were at risk and 11% were vulnerable.

Downtown Sweet, a popular chocolate and dessert shop in downtown Jonesborough, is leaving its storefront and going mobile — with a home base in central Johnson City.

Downtown Sweet moved to its most recent location, 101 E. Main St., last May. Store owner Bethany Oakes made the decision to buy a food trailer after the business she shared the space with left in mid-March.

Oakes said when the other business left, she took a deeper look at Downtown Sweet's finances and figured that because most of her business came from wholesale and special orders, a food trailer made more business sense than a brick-and-mortar storefront, something she had been considering since the pandemic began.

“As much as I love being in this building, it doesn’t really constitute this amount of money I’m paying every month to stay here, especially with (the other business) gone,” Oakes said. “I was like, honestly, it was a smarter business decision because I cut my overhead by about 70%.”

Oakes said she learned of the spot by chance when somebody who came into her store mentioned they were buying furniture for a food truck park after Oakes told the customer of her plans to go mobile. And while Oakes is looking forward to her new adventure, the move will be bittersweet.

“I’m going to miss a lot about downtown Jonesborough,” Oakes said. “You build a lot of relationships and community with people and you have your regulars and you have people that you ... like, I had my last tea party last weekend and I almost cried a little bit because it was something we could do in the store that we can’t really do in the truck, but we are making it an option for people to actually hire us to cater a tea party for them.