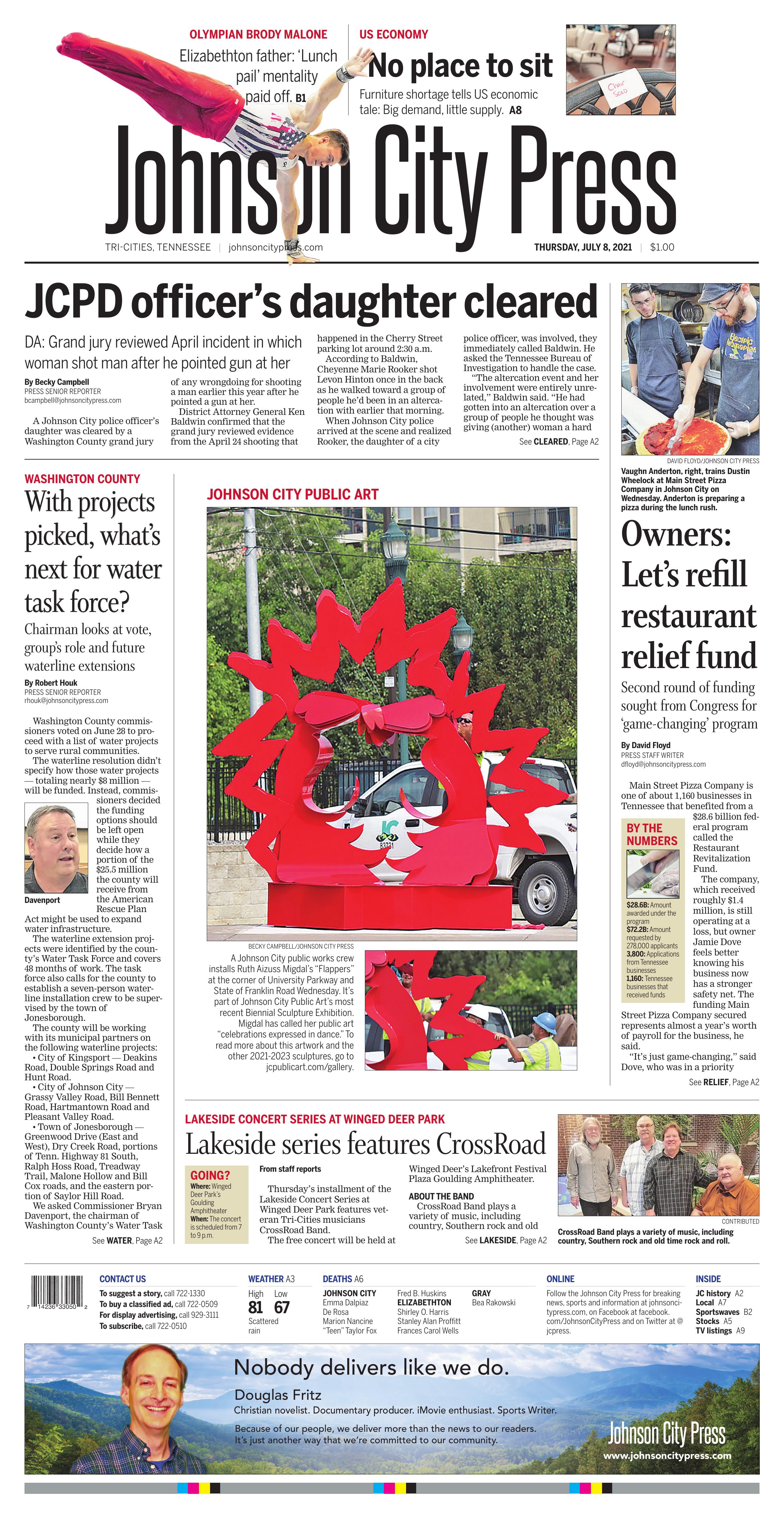 CrossRoad Band plays a variety of music, including country, Southern rock and old time rock and roll. All five members have been involved in music for 40 to 50 years, and each shares duties on vocals. The band has played most venues in the Tri-Cities and surrounding areas, and members say they look forward to being at Winged Deer Park again this year.

The Lakeside Concert Series offers a mix of the area’s top talent at a venue known for its friendly and welcoming atmosphere. Attendees are encouraged to bring blankets or folding chairs to relax on the grassy hillsides, or move and groove whenever the mood strikes. The location provides easy access, free parking, concessions, a playground and plenty of room for social distance.

Commissioner Bryan Davenport, the chairman of the county's Water Task Force, explains a map of waterline projects to his colleagues before a meeting on June 28.

Washington County commissioners voted on June 28 to proceed with a list of water projects to serve rural communities.

The waterline resolution didn’t specify how those water projects — totaling nearly $8 million — will be funded. Instead, commissioners decided the funding options should be left open while they decide how a portion of the $25.5 million the county will receive from the American Rescue Plan Act might be used to expand water infrastructure.

The waterline extension projects were identified by the county’s Water Task Force and covers 48 months of work. The task force also calls for the county to establish a seven-person waterline installation crew to be supervised by the town of Jonesborough.

The county will be working with its municipal partners on the following waterline projects:

We asked Commissioner Bryan Davenport, the chairman of Washington County’s Water Task Force, to answer a few questions on the waterline projects and the direction the task force is likely to take in the future.

How important was the County Commission’s vote on the water projects?

It was very important. This sets a road map going forward to get every citizen in Washington County access to municipal water. This will take a commitment from future commissions to complete, but the journey has begun.

It also shows what can be done by working together as a commission with our municipalities to identify the projects that make sense to complete. We worked with the engineer to determine the priority of the projects, the projected cost and the number of households served.

It was a very analytical process.

Where do you see the task force going from here?

The task force will work with our municipal water partners in Jonesborough, Johnson City and Kingsport to identify additional projects in the near future. This needs to be done in case additional funding becomes available.

What role will the task force take in seeing that these projects progress?

The task force will work with each of the municipalities to get quarterly updates and keep the citizens and the County Commission updated on progress and budget.

The hiring of a work crew to focus on expanding water service to rural residents, under the direction of the town of Jonesborough’s Water Department, is an integral piece to this puzzle.

You have to have the manpower available and dedicated to the projects, and we simply haven’t had that in the past.

What are the expectations and criteria for selecting future waterline projects?

The expectation is to provide access to clean water to every citizen in Washington County.

The criteria is to work with each water provider to make the best and most reliable decision that affects the most homes in the most cost efficient manner possible.

Main Street Pizza Company is one of about 1,160 businesses in Tennessee that benefited from a $28.6 billion federal program called the Restaurant Revitalization Fund.

The company, which received roughly $1.4 million, is still operating at a loss, but owner Jamie Dove feels better knowing his business now has a stronger safety net. The funding Main Street Pizza Company secured represents almost a year’s worth of payroll for the business, he said.

“It’s just game-changing,” said Dove, who was in a priority group for funding because he is a veteran. “It’s the difference between us really having been set back like a decade ... or basically almost being back to even.”

The fund, however, recently closed, leaving at least one local business, Dos Gatos Coffee Bar, empty handed. Owner Dick Nelson said he was hoping to use the $67,000 he requested through the initiative to put additional seating on the roof of his building.

“That would’ve given us an opportunity to literally take it up a notch,” he said.

Roughly two-thirds of businesses in the United States that applied didn’t receive funding, according to numbers from the U.S. Small Business Administration. In Tennessee, 1,160 of almost 3,800 businesses that applied received money under the program.

Nelson recently sent an email to U.S. Sen. Marsha Blackburn’s office urging her support in pumping another round of funding into the initiative.

SBA spokesperson Lola Kress said replenishing the fund is now in the hands of Congress.

“We may only comment on this if it becomes law,” she said. “The RRF Program has been extremely impactful.”

What is the Restaurant Revitalization Fund?

The U.S. Small Business Administration recently announced that the program, which was signed into law by President Joe Biden under the American Rescue Plan Act, would close after awarding $28.6 billion to more than 100,000 restaurants and food and beverage establishments.

Because of overwhelming demand, the SBA said it was unable to fund all qualified applications with the original appropriation under the American Rescue Plan.

As of June 30, the SBA said, 278,000 businesses had submitted eligible applications, totaling $72.2 billion in requested funding.

Restaurants and bars were eligible for aid equal to their pandemic-related revenue loss, with a cap of $10 million per business and $5 million per location. Payroll and rent were among the eligible uses.

The SBA said the application platform will remain open for two weeks to allow applicants to check their status, address payment corrections or ask questions. The SBA will disable the platform on July 14.

How are businesses doing?

At Dos Gatos Coffee Bar in downtown, Nelson said, operations are returning to normal. The month of June this year was about the same compared to the month of June in 2019, he said.

The business closed its indoor seating area in favor of a walk-up window during the pandemic. The coffeeshop reopened indoor service in June.

Like other restaurants in the region, Main Street Pizza Company has struggled with staffing, and it’s currently operating at reduced hours.

Although he’s wary of the COVID-19 variants, Dove is pleased to hear about the effectiveness of vaccines and is sensing enthusiasm among customers to return to in-person dining.

“I think people are ready to go and that part is good,” Dove said, “but the problem is we have to scale back up and you can’t just flip a switch. That’s the new challenges for restaurants in particular.”

Restaurants, he noted, operate on a very tight margin, which means losing a couple days or even a few hours can be tough. Although he feels better knowing that Main Street Pizza Company now has some additional financial padding, he’s hopeful Congress will add another round of funding to the Restaurant Revitalization Fund.

“For a couple hundred thousand restaurants that applied for that same fund, they don’t know that,” he said.